Malaysian police have confiscated a haul of luxury goods during a corruption and money laundering investigation into the country’s former Prime Minister.

Officers seized 284 designer handbags and 72 suitcases containing cash, jewelry and other valuables on Friday during the probe into Najib Razak’s business affairs.

Commercial crime chief Amar Singh said the valuables were found during a search of apartments linked to Najib at an upscale condo in Kuala Lumpur. 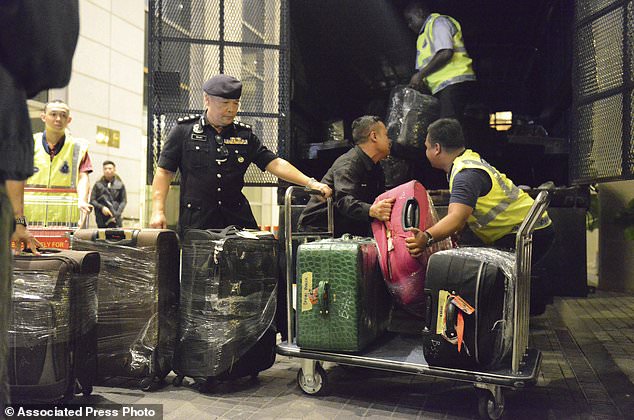 Police load confiscated items into a truck in Kuala Lumpur, Malaysia. They included 72 suitcases containing cash, jewelry and other valuables 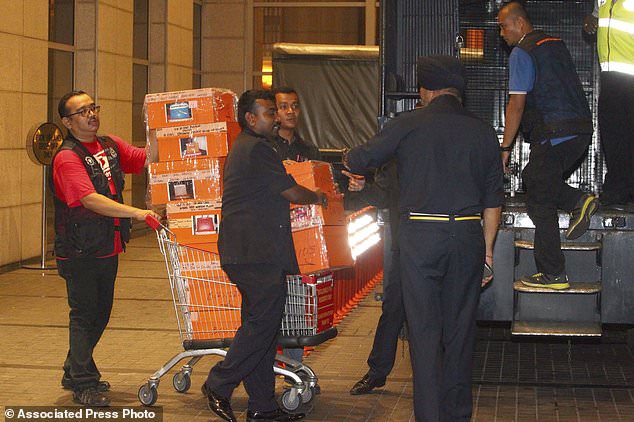 Singh said the seizure was part of investigations into a corruption scandal at the 1MDB state fund, which is also being probed by the U.S. and other countries.

Some of the money allegedly landed in Najib’s bank account and $23million was used to buy a pink diamond necklace for his wife, it is claimed.

Najib, whose coalition was ousted in a stunning election defeat last week, denies any wrongdoing.

Each orange box has a label and a picture of the bag. 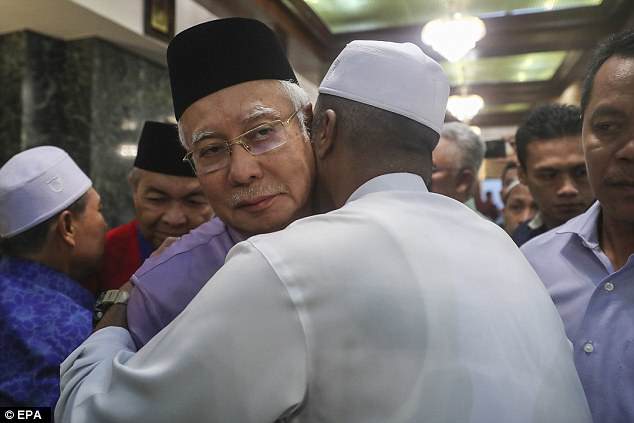 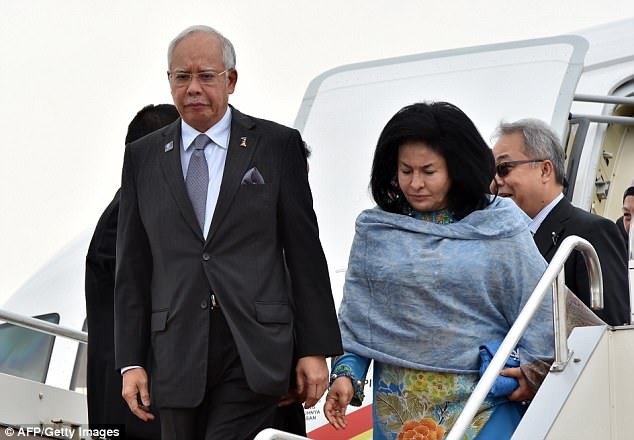 Najib Razak and his wife Rosmah Mansor arrive in Tokyo on May 24, 2015. He is said to have bought her a $23million pink diamond necklace with laundered money

All appeared to be new and were bought abroad, including in Paris and Switzerland in 2013 and 2015.

Najib’s wife, Rosmah Mansor, is known in Malaysia for her love for Birkin bags, which luxury publications say cost from $12,000 to more than $200,000.

Singh declined to say who the apartments belonged. He said the ‘search was conducted in relevance to our 1MDB investigations.’

Police conducted simultaneous raids at several other locations including Najib’s family house, his former office as prime minister and an official residence. 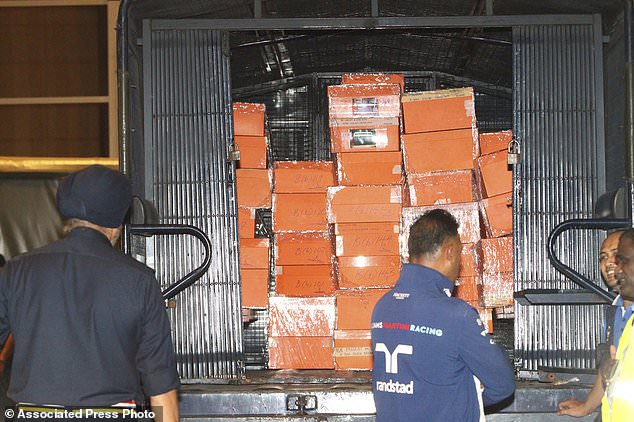 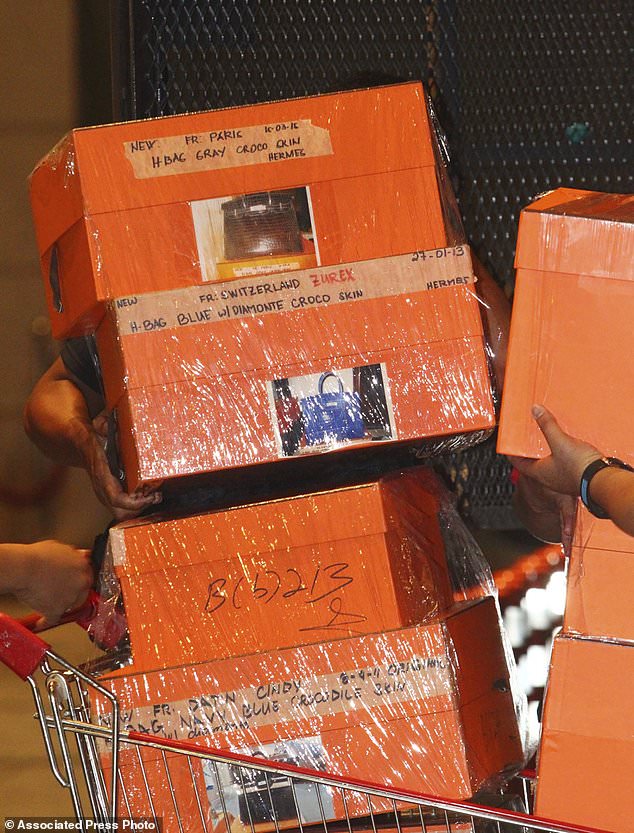 Police prepare to load confiscated items into a truck in Kuala Lumpur. A label showing a luxury handbag can be seen printed on two of the orange boxes Police prepare to load confiscated items into a truck in Kuala Lumpur. A label showing a luxury handbag can be seen printed on one of the orange boxes

Documents related to 1MDB were taken from the office and police are still trying to crack open a safe in Najib’s house, he said.

He declined to say if the haul would lead to an indictment for Najib. The search for evidence continues, he said.

New Prime Minister Mahathir Mohamad, who led an opposition alliance to victory in May 9 polls that ended the 60-year rule of Najib’s coalition, has reopened the probe into 1MDB.

Mahathir, 92, has said an initial investigation showed the scale of wrongdoing by Najib’s administration was more serious than thought.

He has said that arrests will be made when there is evidence, and there would be ‘no deal’ with Najib.

Mahathir was premier for 22 years until 2003 but made a political comeback amid anger over the 1MDB scandal.

Police spent 20 hours beginning late Wednesday searching Najib’s house, and his lawyer said items such as handbags and clothing were taken away.

Najib and his wife have been barred from traveling overseas.

Mahathir has said the government will seek to retrieve billions of dollars laundered from 1MDB to repay government debts that have piled up over the years. 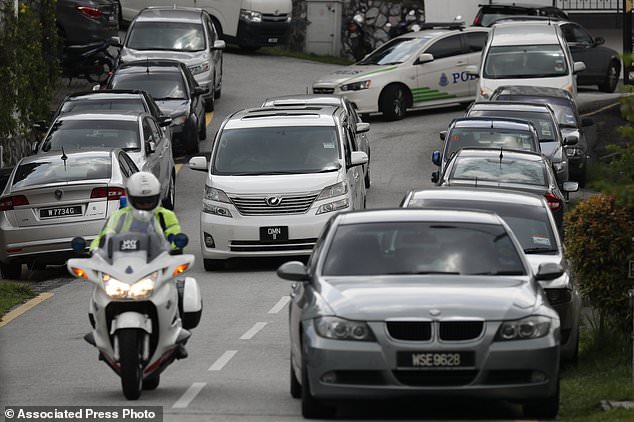 The government has also told the current attorney general, who cleared Najib of wrongdoing in 2016, to go on leave.

It has relieved the country’s treasury chief, who is also the 1MDB chairman.

The government has set up a five-member committee to handle the 1MDB case.

It includes a former attorney general and an adviser to Indonesia’s Financial Services Authority.