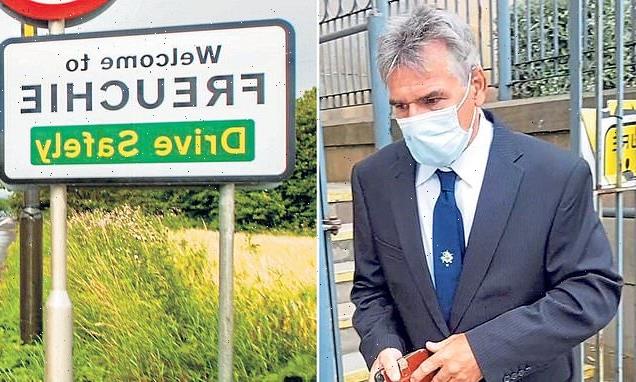 Homeowner, 57, doused his next-door neighbour’s son in petrol and threatened to set him on fire with blowtorch in village parking row

A man was doused in petrol and threatened with a blowtorch during a row over parking in a Fife village.

Hugh Vinning said he would set David Harrison on fire during the heated argument in Freuchie, Fife, last summer.

The pair had been embroiled in a bitter dispute about Mr Harrison parking his car on Vinning’s property. 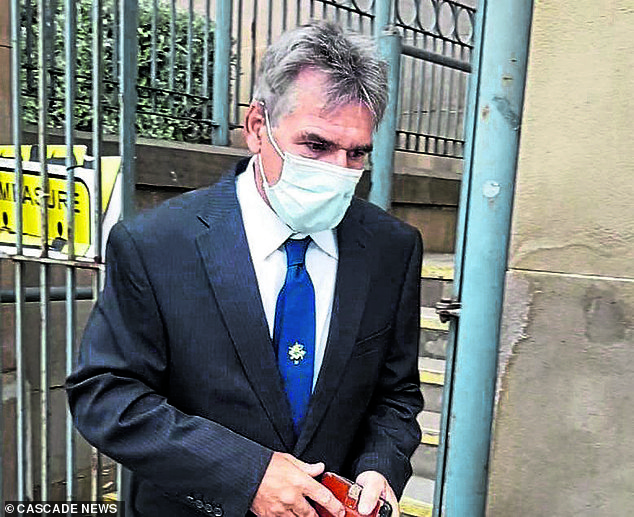 Hugh Vinning, pictured, threw petrol over his neighbour’s son after he blocked

Vinning, 57, said: ‘I’m going to set you on fire,’ after throwing petrol for on Mr Harrison while clutching a blowtorch in his other hand.

Reports have been ordered after Vinning pled guilty to assaulting Mr Harrison on June 20 last year.

Dundee Sheriff Court heard Vinning ‘lost it’, believing Mr Harrison, the son of his next-door neighbour, was going to kill him with a brick he was holding above his head.

The incident was sparked after Mr Harrison had blocked Vinning’s driveway with his car when he was expecting guests to arrive.

Depute fiscal Emma Farmer said: ‘Over the past couple of weeks the dispute had escalated.

‘On the day in question, the complainer left his mother’s address and engaged in conversation with the accused.

‘An argument ensued between them regarding the complainer parking on the accused’s private property.’ 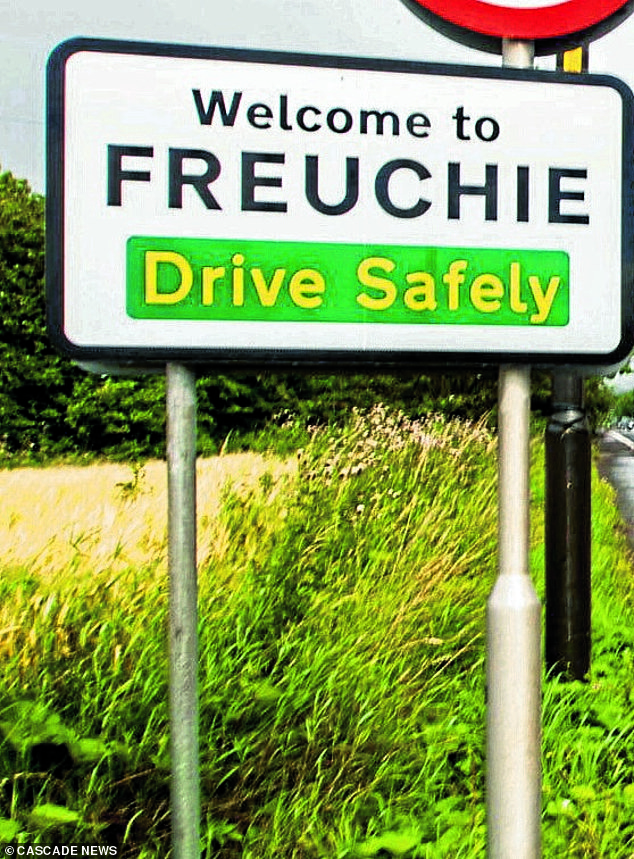 The incident happened in the Fife village of Freuchie on June 20, 2020

She added: ‘Things got heated between the two and the accused returned to his home address.

‘He returned with a plastic container in his hand along with a blowtorch.

‘The complainer had been at his mother’s rear garden and felt a liquid on his left hand side, along with a smell of petrol.

‘He then saw the accused with the blowtorch.’

The blowtorch was not lit at the time.

After officers arrived, Vinning said: ‘I shouldn’t have did what I did. I just lost it.’

Vinning pled guilty to assaulting Mr Harrison by throwing petrol on him while in possession of a blowtorch, pointing it in his direction and making a threat to set him on fire.

Solicitor Jim Laverty said his client had felt intimidated by the taller and younger Mr Harrison, who had been using his driveway to access his mother’s home.

Mr Laverty said Vinning had erected a fence to prevent Mr Harrison parking on a grass area at the bottom of his home.

It was claimed Mr Harrison confronted Vinning about this and threatened to burn the fence down.

‘This behaviour by Mr Vinning is completely and utterly out of character,’ Mr Laverty told Sheriff Alastair Carmichael.

‘Mr Harrison had taken to parking his vehicle at the entrance to the driveway.

‘His mother does not have a driveway and access to her property is via King Street.

‘On June 20 Mr and Mrs Vinning were expecting family but found that Mr Harrison’s vehicle was parked on the pavement, blocking the driveway.

Mr Laverty added: ‘The straw that broke the camel’s back and caused Mr Vinning to lose all self-control was that a building block was raised above his head in a very threatening way.

‘He thought he was about to be killed.

‘His memory of the incident where Mr Harrison threatened to burn down the fence is the only link to him going to his garage to pick up the container of petrol and the blowtorch.’

No further incidents have arisen since, with Vinning stating that he had no issues with Mr Harrison’s mother.

Sentence was deferred on Vinning until July to allow for reports to be prepared.