Amsterdam: A van drove into the head office of Dutch newspaper De Telegraaf early on Tuesday shattering its glass facade in what police said was a deliberate act.

Authorities said they would give newspapers and other media companies in Amsterdam extra protection in the wake of the attack.

Surveillance video published by the newspaper's website show the van driving into the front of the building twice before the driver set the vehicle on fire and ran away. The building was almost empty at the time and no one was injured.

De Telegraaf specialises in sports and crime and is the largest daily in the Netherlands.

Last week, a rocket was launched at the office of Dutch crime magazine Panorama. No one was hurt and a 41-year-old man was arrested.

"One of the scenarios is that the incidents are related to recent publications about organised crime," said local police, prosecutors and the mayor's office in a joint statement. 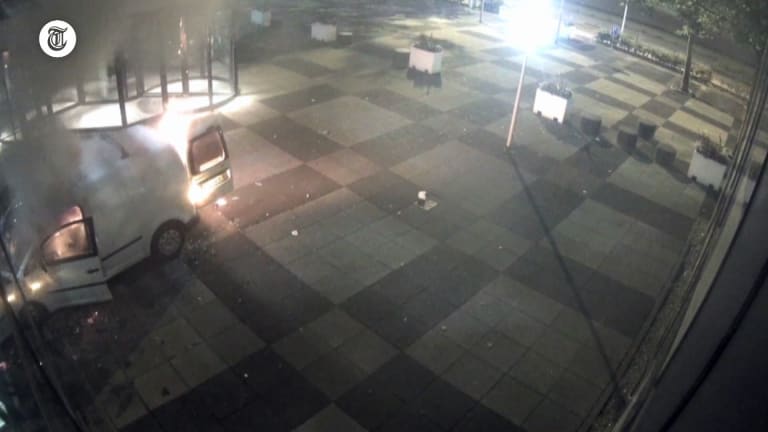 This image taken from a security camera video shows a van on fire outside the newspaper building.

Authorities said they would increase protection of the offices of the five largest national newspapers, two magazines and the local TV station in the Dutch capital, by placing extra cameras and increasing police surveillance.

They said new attacks could not be excluded, although they had no indications of attacks being planned.

Prime Minister Mark Rutte said on Twitter the attack was "a slap in the face for the free press and Dutch democracy".

Editor-in-chief Paul Jansen said the attacks on his paper and Panorama magazine were a cause of great concern. "But we will not be intimidated."

The driver of the van that hit the Telegraaf around 4 a.m. (0200 GMT) escaped in a getaway car driven by an accomplice, police said.