New father faces £2,500 fine after he was snapped doing 101mph on the M5 as he raced to get his pregnant wife to hospital after she went into labour

A young father is facing a court battle after he was caught speeding to hospital at 101 mph – because his wife was moments away from giving birth in the passenger seat.

Louis Baker, 30, from Birmingham, rushed to get his partner Laura to the Worcestershire Royal Hospital as he knew she had a checkered medical history and there could be complications with the birth.

The baby had stopped growing inside the womb two weeks earlier and Mrs Baker needed to have antibiotics before her son could be born.

Mrs Baker was set to be induced on April 15 but began having contractions the day before, leaving the young family with no choice but to make the 30 minutes journey down the M5 to hospital. 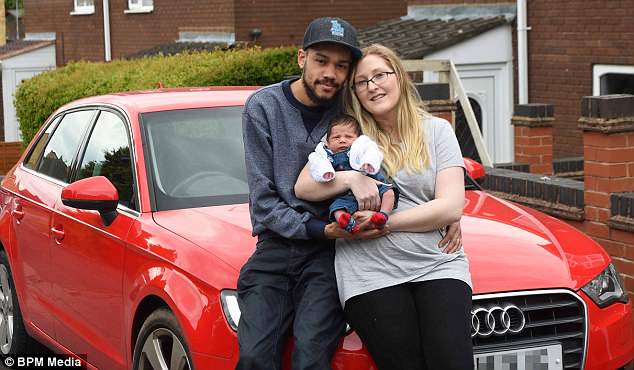 Louis Baker, 30, from Birmingham, rushed to get his partner Laura to the Worcestershire Royal Hospital as he knew she had a checkered medical history and there could be complications with the birth

Her contractions began to become more frequent so Jaguar Land Rover worker Mr Baker sped up, and was caught by a speed camera driving at 101 mph.

Two-week-old Ellies was safely delivered but Mr Baker, who has a clean record, now faces six points on his licence and a fine which could rise to £2,500.

Mrs Baker, a 26-year-old trainee pharmacy technician, was convinced she would have a quick birth after her daughter was delivered in 11 minutes, and insisted Mr Baker was driving within the legal limit of 70 mph for the majority of the journey.

She said: ‘I was a bit all over the place with the pain and he sped up and was flashed at 101 mph on the very last bit of the journey.

‘Louis wasn’t concentrating on his speed at that point, he was trying to stay safe on the road and get me to hospital as quickly as possible.

‘I felt like I had to push the baby then and there, but there was no hard shoulder to stop on.

‘There were four lanes and a large parking bit. You’re supposed to park there if you have to, but I didn’t want to give birth in the fourth lane with all the cars and lorries whizzing past.’

Upon arriving at the hospital, medics helped Mrs Baker, knowing that she was a group B strep carrier and that she needed to take antibiotics four hours before the birth.

Due to the sudden nature of her birth, she managed to only take the antibiotics an hour before Ellis was delivered and suffered a haematoma.

She said: ‘Ellis was unresponsive when he was born for about 20 to 30 minutes, and had to have oxygen. He’s fine now.

‘I remember Louis telling one of the midwives that he thought he’d just been flashed. They were sympathetic and said “Oh don’t worry about it, it will be OK”.’

The next day, the couple called the authorities to explain why they speeding. They were told to write a letter detailing their circumstances – but were later informed their evidence did not matter due to the excessive speed. 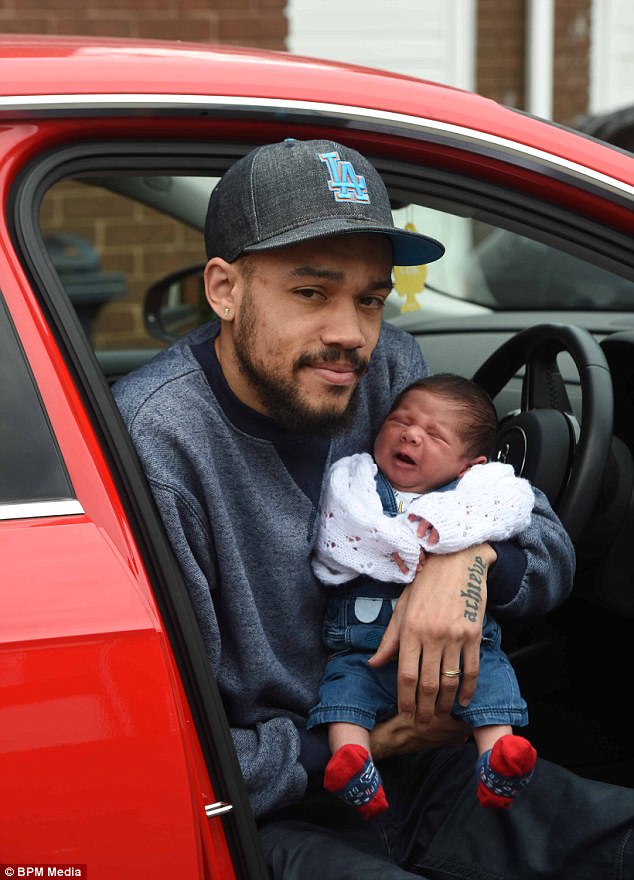 Louis Baker (pictured with his two-week-old son Ellis) could face six points on his licence and a fine that could reach £2,500

‘Louis has a completely clean licence. He’s never been in trouble over anything. He believed that if I had given birth in the car, something could have gone wrong.

‘No doubt if the police had stopped Louis at that speed they would have blue-lighted us to hospital – but it was a camera.

‘It was an emergency and he was doing what he could to save us.

‘If he’d lost us, he’d have been bringing up two kids by himself as well.’