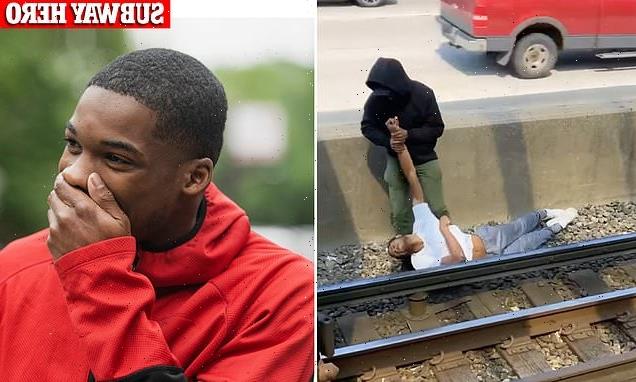 Moment Chicago commuter, 20, leaps onto subway tracks to rescue man who had fallen onto electrified third rail after a brawl and pulled him to safety: ‘I could feel the shocks through my body but it didn’t stop me’

A 20-year-old Chicago man is being celebrated as a hero after he leaped into action to save the life of a man who fell on the subway’s potentially deadly third electrified rail.

Anthony Perry, 20, was honored in a ceremony on Wednesday by a local community leader who awarded him a new car for his heroism.

Perry told WGN TV about the moment he saved the man’s life: ‘I don’t think I was thinking about what could happen to me at the moment. It was more of what do I have to do to make the situation peaceful. I felt a little shock. I felt it all over my body actually, and then I just didn’t let that stop me.’

The incident occurred on at 3:30 p.m. Sunday at the 69th Street Red Line CTA station in the Greater Grand Crossing neighborhood in Chicago. 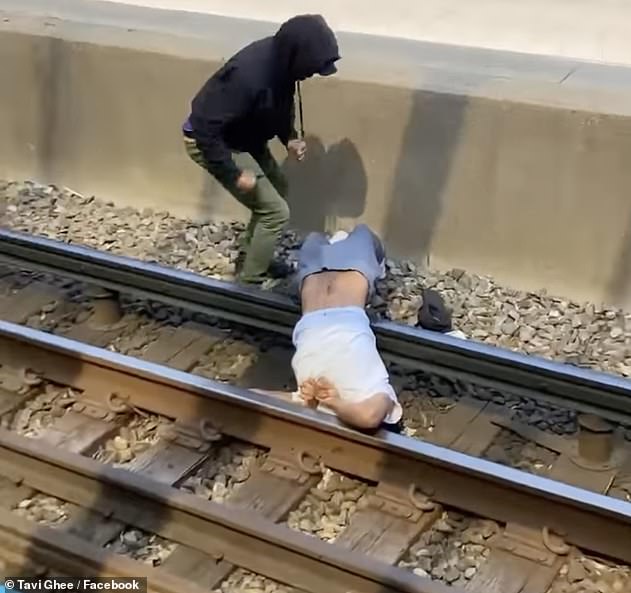 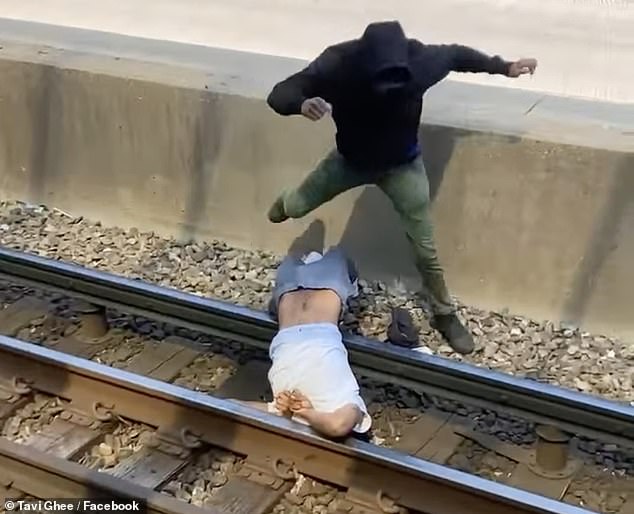 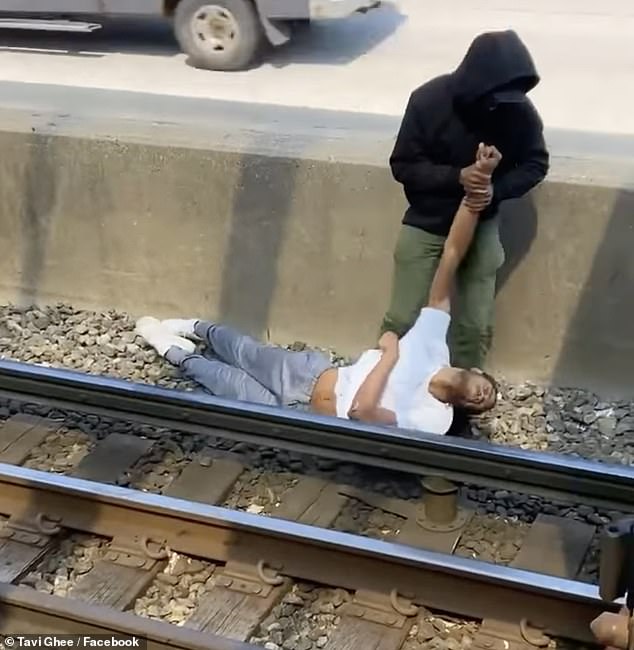 Despite being shocked slightly, Perry was able to pull the man to safety 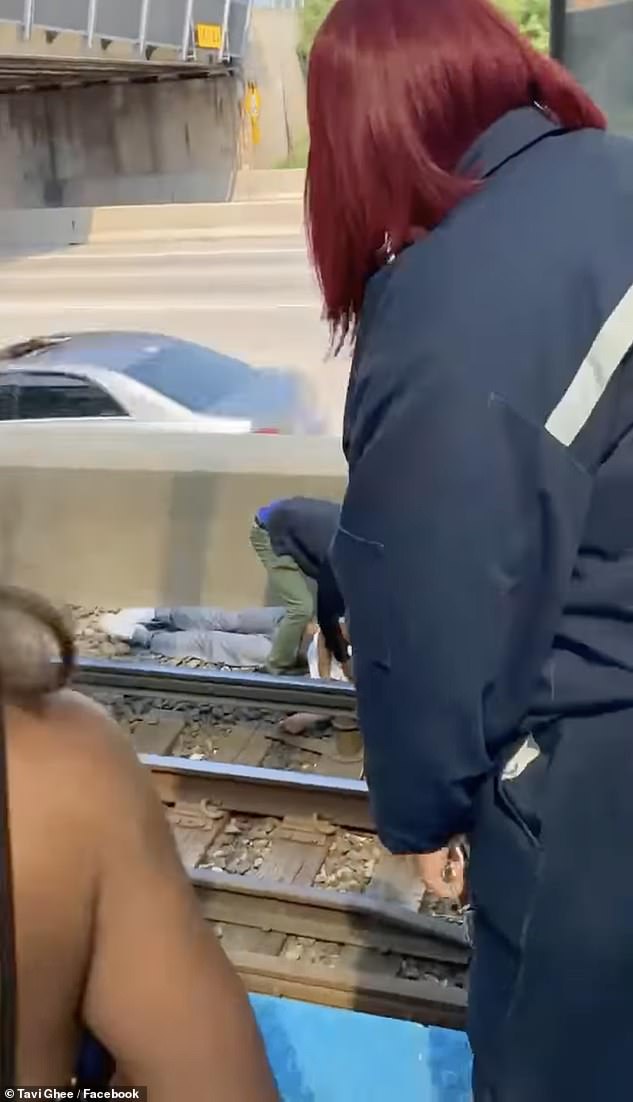 Perry said of the other witnesses to the potentially fatal incident: ‘No one actually did anything, they just wanted to record’

According to authorities in Chicago, the man fell on to the rail after a fight with another commuter.

The shocking video shows the man’s body pulsating as the electricity courses his body.

The hero can be seen jumping on to the tracks and carefully jumping over the rail so as not to be electrocuted himself. Perry had just exited a train when he saw the man on the tracks.

In the video, Perry jumps back slightly when he touches the man’s body.

He then starts to pull the man away from the rail. With the help of another witness, Perry administered CPR to the man. 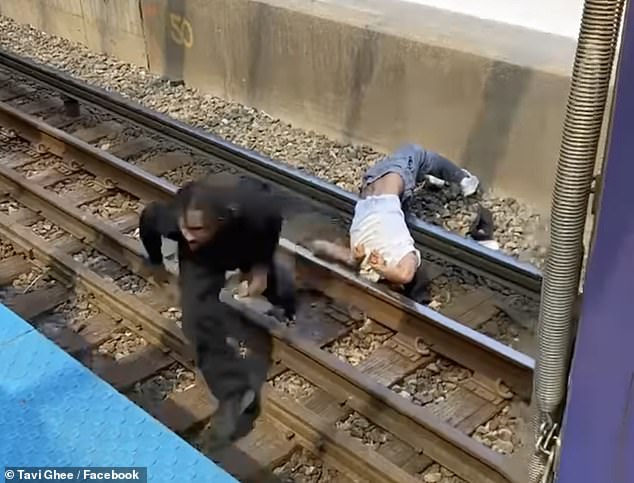 The suspect seen here fleeing the scene. Police are still working to identify him with witnesses saying that he instigated the incident

He was helped in his life-saving efforts by a woman who who knew CPR. Perry told Fox Chicago: ‘She was talking me through on what to do. I feel like that was an angel from God. I ended up doing chest compressions and turning him on his side until the fire department got there.’

The man who is shown being electrocuted in the video, 32, walked up to the other man and instigated the fight by spitting on him, witnesses said.

The two men fought and both ended up on the tracks, reports Fox Chicago.

The man who filmed the event, Tavi Ghee, told ABC Chicago: ‘It was definitely surreal. That was an out-of-body experience.’

A subsequent video posted by Ghee showed the two men rolling on the tracks with each other.

The two men can be seen exchanging blows until the man in the white shirt becomes trapped on the third rail.

The other man leaves the scene begins to get electrocuted with 600 volts coursing through him.

In an interview with CBS News, Perry described the scene saying: ‘I immediately noticed there was a fight because both guys got their dukes up – they were like putting their stuff down.’

He continued: ‘I could’ve kept walking, but I was like, you know what? I’m not going to keep walking – because God wouldn’t want me to do that, so I took action immediately.’

Perry added: ‘I was thinking about, if that was me in that situation, how would I want people to treat me? I’m just happy that the guy was alive, more than anything. I didn’t see myself as a hero, to be honest.’

The man who was electrocuted is being treated at the University of Chicago Hospital and is in serious condition.

The other man managed to get off the tracks and ran out of the station. Investigators are still working to identify the man.

At a ceremony honoring his actions Perry told the gathered media: ‘I was hoping I could just grab him and not feel nothing but I felt a little shock.’ 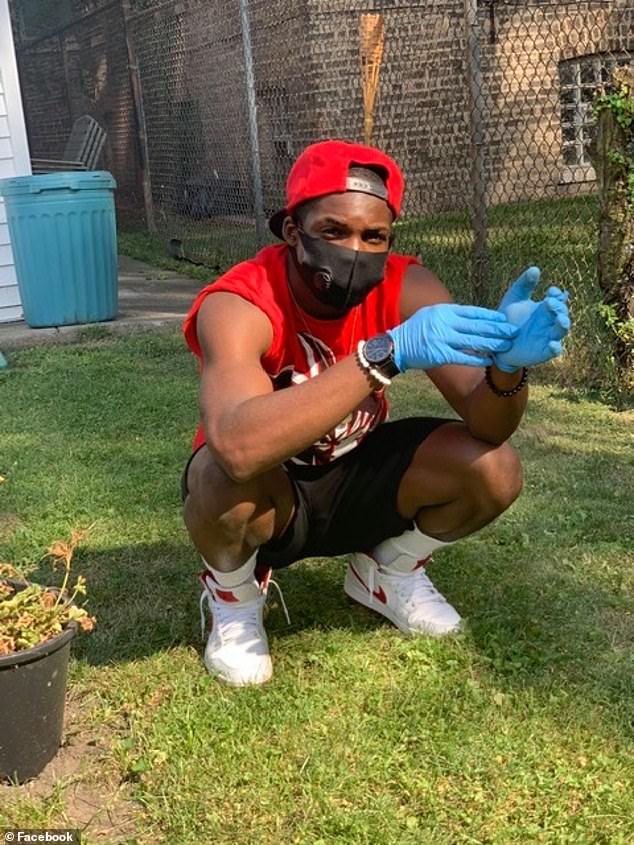 Perry was a football star at Harold L. Richards High School in Oak Lawn. He graduated in 2020

Perry said of the witnesses: ‘When I looked back on the video and I listen, it sounded like everyone was in fear … no one actually did anything, they just wanted to record.’

During the same ceremony, Chicago philanthropist Early Walker presented Perry with a gas card. When Perry said that he had no need for a gas card as the didn’t have a car, Walker presented him with a 2008 Audi A6, to the hero’s disbelief.

Perry told the media that he typically had a 90 minute commute to his job at an Amazon Fresh in Oak Lawn in suburban Chicago, taking two buses and a train.

The hero is a graduate of Harold L. Richards High School in Oak Lawn. Perry played as a defensive back for the school’s Bulldogs football team where he was considered in the top 50 players in the state, according to his Max Preps page. 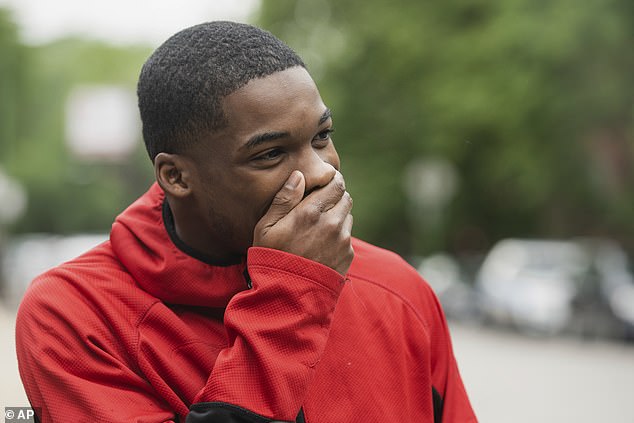 The moment Perry realized that because of his heroism, he was being gifted an Audi 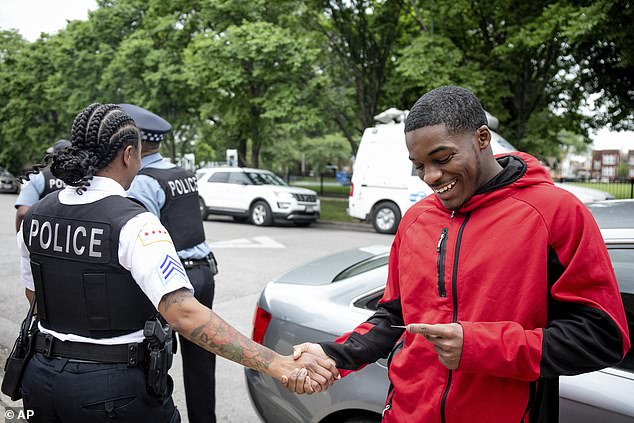 Perry being congratulated by members of the Chicago Police Department 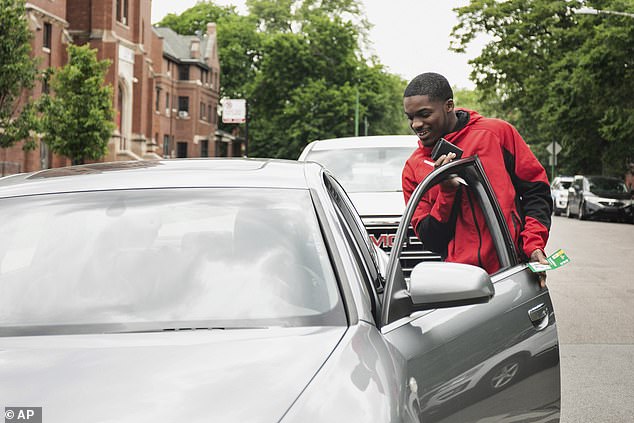 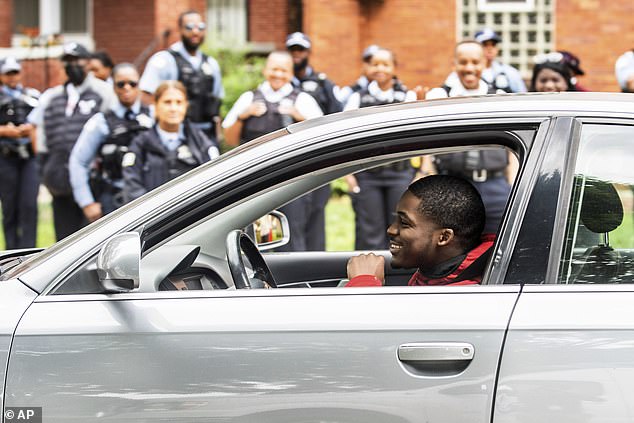 Chicago Police Department Lieutenant Yolanda Irving said of Perry: ‘This is just a prime example of how a young man took it upon himself to jump in and do the right thing’

Early Walker is the founder of the group, I’m Telling Don’t Shoot, which describes itself on Facebook as: ‘Group of business owners team up to offer reward money to help find the killers of our babies!’

Walker told the media at the ceremony honoring Perry: ‘We need more Anthonys in the world. We need more people like this.’

Chicago Police Department Lieutenant Yolanda Irving told WAGM TV: ‘This is just a prime example of how a young man took it upon himself to jump in and do the right thing.’

According to the CTA, if you see someone on the tracks, notify a CTA employee will in turn notify the control center who will turn off power to the third rail.

Persons ‘should never try to enter the right of way, or try to remove the person themselves, as they risk electrocution.’