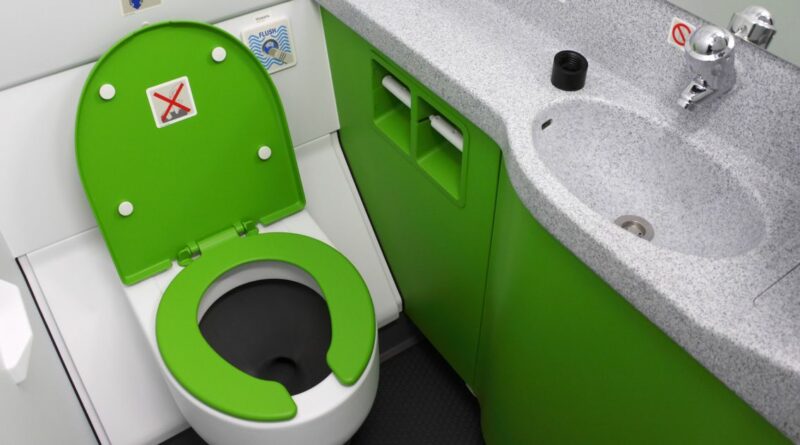 With a loud suck, a woosh and a resounding pop the aeroplane lavatory removes the contents of the toilet bowl from the pressurised cabin.

But where does it go? Rumours that waste is simply ejected from the plane are untrue, with modern aircraft having their own septic tanks.

But not everything in life goes to plan, and sometimes waste can escape from tanks, becoming what is known as 'blue ice'. It is thought that blue ice events happen around 25 times per year.

Andy Swann was standing in his garden in Stockingham Farm, Leicester, where he lives with his partner Gaynor when the 18-inch wide slab of frozen urine smashed into the roof of his house.

By his calculations it had only missed him by four feet.

He said at the time: "There was a big bang and it hit the ridge tiles on the roof, then the patio. It would have killed me if it had hit me, without a doubt."

The plummeting blue ice chunk caused hundreds of pounds-worth of damage to farmhouse roof, sending tiles flying off into the house's surroundings.

“It looks like frozen wee. I would think it’s chemically treated, but when it thawed out on the patio it didn’t smell very pleasant.

“I find it’s quite funny now, but on Saturday I was angry to say the least."

Stephanie Cole suffered from a similar freak occurrence. Her car was parked outside her house in Great Glen, Leicestershire, when the ball of blue ice slammed into its bonnet and ricocheting off before finally coming to rest on her driveway.

She said: "It was a massive lump and could have hit someone walking past my house and killed them. It’s too scary to think about."

Neither Stephanie or Andy saw a penny from the plane company responsible for the devastating air drops. Both had to reach into their own pockets to repair their respective damages.

The Civil Aviation Authority or CAA has shed some light on why sky-diving detritus sometimes makes it's way to the earth surface unchaperoned by the confines of aeroplane's sceptic tank.

"Some ice falls may occur because ice which has naturally formed on an aircraft at higher altitudes breaks off as it descends into warmer air," it says.

"We have also received reports of discoloured ice which may carry an odour. This could originate from a leak from a faulty seal on a lavatory hose socket at a servicing point on an aircraft, which is used to unload waste liquid when on the ground.

"This is sometimes referred to as 'blue ice'.

"It should be noted that all lavatory waste is held within the aircraft and collected after landing by special vehicles during the preparation for the next flight.

"If the ice is clear, it may have been due to a leak from the potable water system at an external servicing point. This system provides clean water to an aircraft’s galley and lavatory system.

"A lot of assumptions can be made, but unfortunately it is impossible to trace a piece of fallen ice to a specific aircraft if indeed that was its origin."

The CAA say that any such events should be reported to them immediately, while some air ports will provide free repairs under tier own voluntary schemes. Assessments may often need to be carried out before repairs commence.

Heathrow operate one such falling ice scheme. They say: "If you suspect your house has sustained a strike, you should report it immediately by calling our assessor on 07513 812808, or, calling our Helpdesk on Freephone 0800 344 844 (office hours)."

If all else fails, you may need to contact your insurance company.

Do plane drops keep falling on your head? Get in touch, we'd love to hear your story.