Miami-Dade County jail records show 42-year-old Jonathan Oddi, a South African national living in Doral, was booked just before 7pm on Sunday while still wearing what appeared to be a hospital gown.

Police say Oddi barged into the lobby of the Trump National Doral Golf Club early Friday carrying an American flag and shouting about the president. 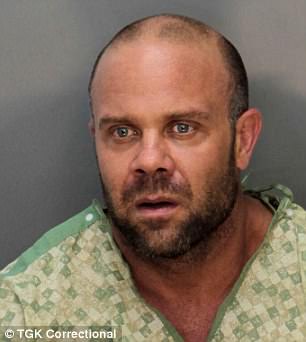 Booked in his gown: Jonathan Oddi, 42, is pictured wearing a hospital gun in his mugshot that was taken on Sunday. He was shot by police on Friday after storming  Trump National Doral Golf Club 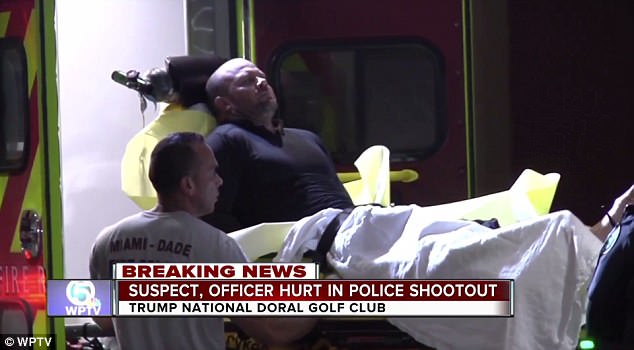 According to police, he fired at a chandelier before exchanging gunfire with officers, who shot him in the legs and took him into custody.

Oddi was held without bond on charges of second-degree attempted murder, aggravated assault with a firearm, burglary with assault, criminal mischief, grand theft and falsely pulling a fire alarm. 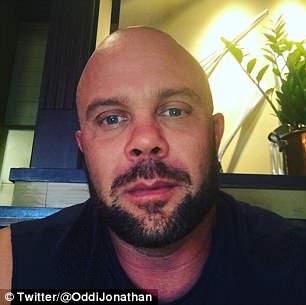 Expat: Oddi is originally from South Africa but lives and works in Doral, Florida

During a brief court appearance via teleconference on Monday, Oddi kept talking over his attorney and reportedly admitted to pulling the fire alarm at the resort, drawing laughter from those present in the courtroom, reported Miami Herald.

‘Your attorney turned the mic off,’ Judge Mindy Glazer told the defendant after his court-appointed lawyer switched off the audio. ‘Probably a wise move.’

Police were notified of an ‘active shooter’ armed with a handgun about 1.30am on Friday.

Oddi allegedly pulled a fire alarm to lure law enforcement into the golf course’s lobby. He also draped an American flag over the lobby’s counter.

Oddi is said to have entered the lobby and began shouting ‘anti-Trump rhetoric,’ and ranting about former President Barack Obama and rapper P. Diddy, before shooting into the ceiling and chandeliers as officers rushed in.

‘We don’t know what his intentions were in the long term but we know what he was doing at the time — he was trying to engage our police officers in some kind of ambush-type attack,’Miami-Dade Police Director Juan Perez said.

Officers from Doral and Miami-Dade confronted the gunman immediately, exchanging gunfire with the man who was ‘neutralized’ and taken into custody. 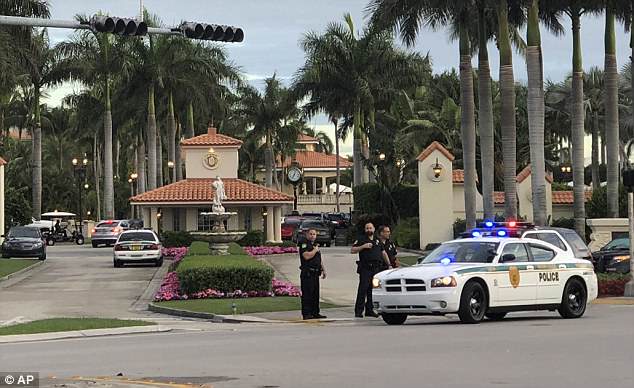 ‘He had an American flag that he did drape over the counter,’ Perez said. ‘That all was part of the investigation. We’re going to take it from there and see what his real motives are and how far we get into that point, and then we’ll have that discussion with the FBI to see how far this goes.’

Oddi left the scene on a gurney and was taken to Kendall Regional Medical Center to be treated for multiple gunshot wounds to his lower extremities.

A Doral officer sustained a broken wrist in the confrontation and was last reported in good condition at Baptist Hospital.

Oddi was born in South Africa but raised in Argentina, where he attended college, studying the travel industry. Less than a year ago, he became an American citizen, and has been living in a luxury apartment building in Doral, not far from the course.

According to his Facebook, he is a ‘fitness consultant’. His LinkedIn profile also says he is the founder of a business called Pegasus Minerals, which deals in gemstones. He also previously worked as a TV salesman, focused on selling to hotels and restaurants.

A friend who regularly works out with Oddi, Luis David Gonzalez, was shocked when he showed up to his apartment Friday morning and found a group of reporters outside. 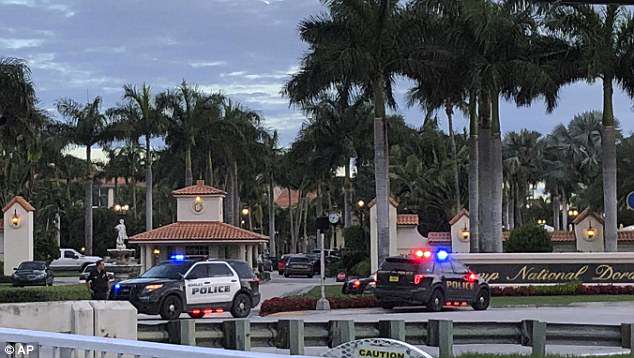 The Secret Service were on the scene at the 800-acre golf resort in Doral, Florida Above, the entrance to Oddi’s apartment, just a few minutes from the golf course

He said he brought his friend over a breakfast of eggs and coffee, because he was worried about him – not having seen him since last week. However, the two have been in contact over the phone.

‘Yesterday he was feeling bad,’ Gonzalez told the Sun Sentinel. ‘He told me he was feeling bad, that’s what he told me, but I never thought he was gonna do something like that. Basically I cannot discuss what’s wrong with him. I’m just his friend.’

Gonzalez described Oddi as a ‘dancer’ and said he lived alone with his dog.

The Sun-Sentinel reports that Oddi has a girlfriend, who was out of the country at the time.

‘#flotus rocks! She sets the example of mannerism. She counters Trumps aggressiveness,’ he wrote about one photo of Melania at the White House.

In another story showing a Time magazine cover on the Stormy Daniels scandal, Oddi writes that ‘Reality is harsh’.

Oddi also criticizes the U.S. for ‘giving $10.4 million every day’ to Israel.

‘They have free healthcare and college. but we don’t because we can’t afford it!’ 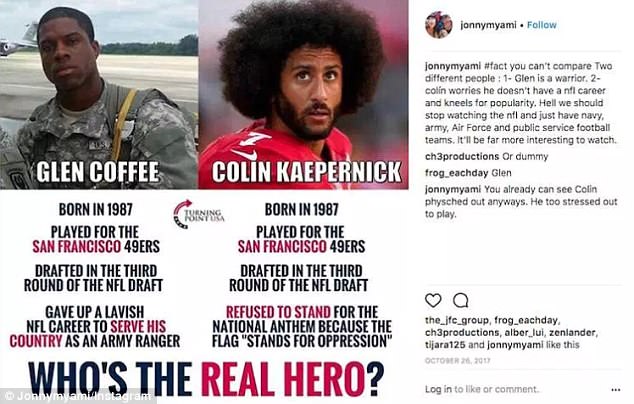 It’s unclear what Oddi was protesting when he stormed the club. In October 2017, he posted a meme to his Instagram account in which he accused Colin Kaepernick, the NFL quarterback who Trump has repeatedly attacked for kneeling during games, of not being a ‘hero’

The meme compares Kaepernick, who was widely criticized for kneeling during the national anthem, with one of his former 49ers teammates, Glen Coffee, who quit the NFL to be an Army Ranger.

The meme impies that Coffee is the ‘real hero’.

In his caption, Oddi says ‘you can’t compare two different people’ but then goes on to say that Kaepernick ‘kneels for popularity’.

However, he seems to be in favor of it according to a tweet he liked from Sean ‘Diddy’ Combs, in support of the protest.

The president’s second oldest son, Eric, tweeted his thanks to local law enforcement for quickly taking the suspect into custody

Perez praised the efforts of the officers who found to stop Oddi.

‘You know, these officers did not hesitate one second to engage this individual that was actively shooting in the lobby of the hotel,’ he said. ‘They risked their lives knowing that that they had to get in there to save lives in that hotel.’

Perez said the Secret Service was on the scene, and the FBI was on the way.

Police were preparing a search warrant on his Doral home on Friday morning and his neighbors were evacuated as officers swept the area looking for any potential booby traps.

Following the shooting, the president’s second oldest son, Eric, tweeted his thanks to local law enforcement.

‘A huge thank you to the incredible men and women of the @DoralPolice Department and @MiamiDadePD. Every day they keep our community safe. We are very grateful to you!’ Eric Trump wrote.

The 800-acre Trump National Doral Golf Club, previously known as the Doral Resort & Spa, was purchased by the Trump Organization in 2012. Its signature course is the Blue Monster at Doral.

The course was the former host of a PGA Tour event and, until last year, was the site of the World Golf Championship.