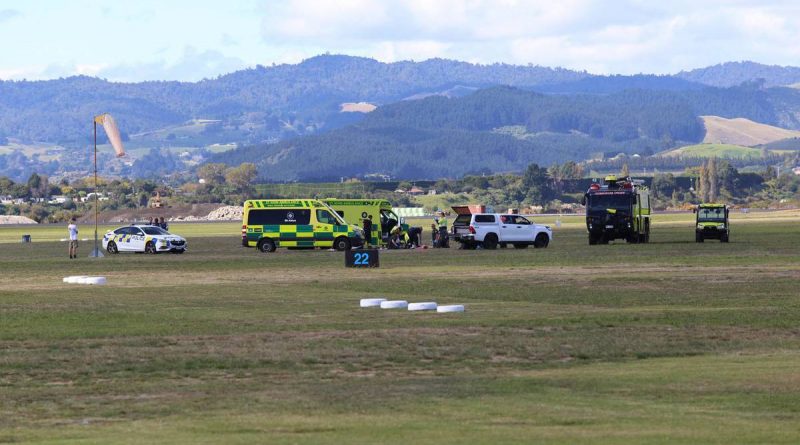 Police have named the man who died in a skydiving accident in Tauranga yesterday as Theo Williams, 21, of Hamilton.

Williams has been described by the skydiving company as an experienced skydiver who was completing a solo jump after a normal free fall and safe parachute opening.

A friend has paid tribute to Williams on social media as the “funniest, most heartfelt, most dedicated and most understanding” person.

“I am so privileged to have met you. You made the world a better place. I will miss you always and love you like a brother.

A witness to Saturday’s accident has described watching in horror as Williams plummeted to the ground.

Maree Conayne told the Herald she was with her family at the nearby gliding school by Tauranga Airport yesterday when the tragedy unfolded.

“We were at the gliding club waiting to go up in the plane… we watched some parachutists come down fine and then we saw a tandem and another one coming down,” she said.

“The lower one, it just kind of started spinning and it came down really, really fast. The ground just shook.”

She said his parachute had deployed but looked “deflated” and did not appear to be catching any air.

“That’s when he just started spinning like a corkscrew.”

Conayne said a young man rushed over and began trying to rouse the victim.

“The airport fire engine, they were doing some training, they came over and they straight away started doing CPR.”

But the fire officers were “already shaking their heads”, she said.

More firefighters soon showed up and continued CPR for some time, before Williams was loaded on to a stretcher and taken away in an ambulance. He died en route to Tauranga Hospital.

Emergency services were called to the airport on Kittyhawk Way at 10.33am on Saturday after reports that a parachutist had crashed.

On Sunday police said while the coroner would make the final call, it did not appear the death had been a result of a medical event, as earlier reported.

Worksafe and the Civil Aviation Authority have been notified.

“Police continue to make enquiries into the circumstances of the incident on behalf of the Coroner.

“Police extend their sympathies to Mr Williams’ family and friends.”

“Skydive Tauranga is saddened by the accident that occurred on Saturday where an experienced, single sports skydiver passed away.

“He was completing a solo jump, and after a normal free fall and safe parachute opening, the sports skydiver suffered injuries upon landing.

“All information has been passed on to the appropriate authorities.

“He is a valued member of our skydiving family, and our thoughts and prayers are with his family and friends.

“We have organised on-going support for our team, and a private karakia was held to honour his memory.”

The Civil Aviation Authority has launched a safety investigation and is sending two investigators to Tauranga tomorrow to start gathering information.

“We won’t know any more until they arrive,” a spokesman said.