Westminster coroner’s court heard last week that the CPS has asked police if there is enough evidence to investigate Bianchi in connection with Jossipalenya’s death. 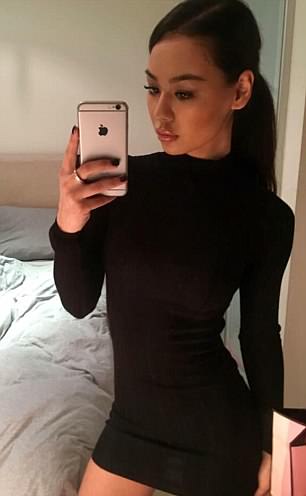 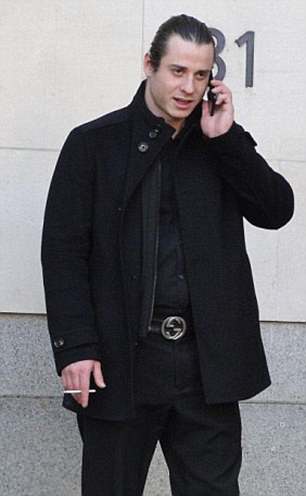 The Sun reported that Det Sgt Emma Kirby, from the Met, explained: ‘We have been asked to look into whether there has been a history of domestic abuse that could have deteriorated the deceased’s mental state to a point where she might have committed suicide.’

Assistant coroner Dr Shirley Radcliffe adjourned the hearing in London last week until an inquest can be completed this year.

Bianchi’s barrister, Steven Powles, said it ‘cannot be said that the defendant’s actions caused the suicide’.

In April, Bianchi was spared jail after admitting disclosing private sexual photographs and films with intent to cause distress and one count of assault by beating.

The couple had met while studying at Regent’s University in London.

A court heard the couple had a turbulent two-year relationship and went for a night out together on June 1 last year and came back to his apartment in Paddington, London, where they started arguing.

Bianchi pushed her out of his apartment in the early hours of the morning and threw her into the water feature outside, leaving her distraught and humiliated.

He claims that any bruises on her body were from his attempts to prevent her from committing suicide by jumping from his eighth floor balcony in the early hours on June 2. 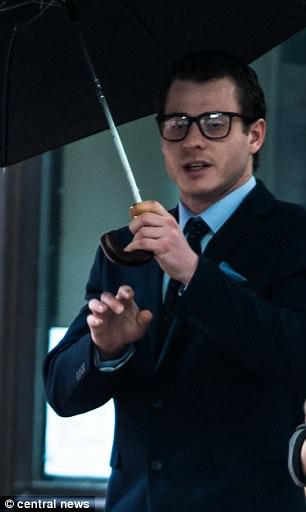 But she killed herself the next day – just one week after she received a video on WhatsApp of her performing oral sex at a phone booth in north London, Southwark Crown Court heard.

Describing an earlier incident, Miss Jossipalenya told police he had ‘grabbed her by the throat, struck her four or five times, spat on her and that she had passed out for a few seconds.’

Carly Loftus, prosecuting, said: ‘A message was sent attached to the recording saying, ‘I am going to keep destroying you’.

‘The complainant’s friend also received the video from three different numbers, one had a message attached, saying ‘I will f*** you up next, my love.’

When Bianchi’s phone was seized by police they found WhatsApp messages in which he had asked his friend to send the video to Miss Jossipalenya.

Miss Jossipalenya told police she did not know she was being recorded in the phone booth.

She explained: ‘I found it really insulting and humiliating, I think he’s doing this for revenge because of the argument. I am still in shock and feel broken.’

Judge Jeffrey Pegden handed Bianchi a suspended jail sentence but said: ‘That video caused her real upset, she was insulted and humiliated by receiving that most personal image of you and her.

‘I accept that video was sent out of revenge for something that the complainant had said about you during the relationship.

‘As far as the assault, that was a short time later, after the image had been reported to the police, you both had been out for the evening and you returned to your flat.

‘There was an altercation when you returned – the events that took place afterwards were the aftermath of that altercation.

‘It is right to say that I sentence you in terms of that assault, in pushing, shoving and man-handling outside of that address and that your hand might have been on her neck very briefly and might have left a mark.

‘But there was no choking and importantly within the flat you had held her away from the eighth floor balcony and that involved a degree of man-handling.’

Bianchi’s defence lawyer, Steven Powles, had claimed he sought vengeance for ‘rumours being spread about Mr Bianchi which could present difficulties to him, given the location where his family live.’

A statement from Ms Jossipalenya’s family, who are from Kazakhstan, said: ‘We cannot describe the pain we feel of losing our beloved Damilya.

‘She was such an adorable, wonderful, loving, caring and intelligent girl.

‘She loves everyone with all of her heart and tried to see the good in everyone she encountered. ‘We are heartbroken to hear the details of the abuse and torment in which our daughter had to endure because of Mr Bianchi.

‘She had a bright future ahead of her and had so many dreams and aspirations to accomplish great things.’

The judge told Bianchi: ‘These offences take place in the context of a two year relationship and I entirely accept that that relationship was a deep relationship but one which was sadly volatile.

‘Indeed as a young man away from the support and guidance of your family who were abroad, I accept that you struggle to understand and cope with your partner’s significant difficulties.

‘It is obvious to me that you had the inadequate life skills to deal with the particular psychological difficulties.

‘It is obvious to me that you, certainly during the course of your relationship, were very much in love with her, indeed you intended to marry her and you may be viewed as having lost the love of your life.

‘You genuinely cared for her and you genuinely grieve for her now and her loss has had a lasting impact on you.’

Bianchi, of Paddington, admitted disclosing private sexual photographs and films with intent to cause distress and one count of assault by beating.

He was sentenced to 12 weeks suspended for 12 months and ordered to carry out a 30 day rehabilitation activity requirement and pay prosecution costs of £250.