Furious United Airlines passengers have criticized the company after a man who they claimed was showing clear coronavirus-like symptoms was allowed to board the plane and died before he reached his destination.

The flight took off from Orlando bound for Los Angeles on Monday, and the victim was pronounced dead after an emergency landing in New Orleans.

Medics on board attempted to save him, including by reportedly performing CPR. His wife, one passenger said, told all within earshot that he had been showing symptoms for the past week and so she suspected COVID-19.

United said on Friday they were trying to trace those on board United Flight 591.

The flight was a Boeing 737-900 with capacity for 179 people, according to Flight Aware.

The victim was taken off and the plane and all other passengers then carried on to LA – with some later saying they were not offered the chance to rebook onto a different flight. 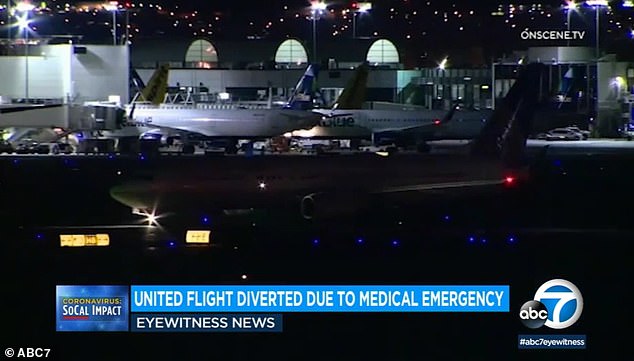 United 591 is seen arriving at Los Angeles airport, after a passenger died on leaving Orlando 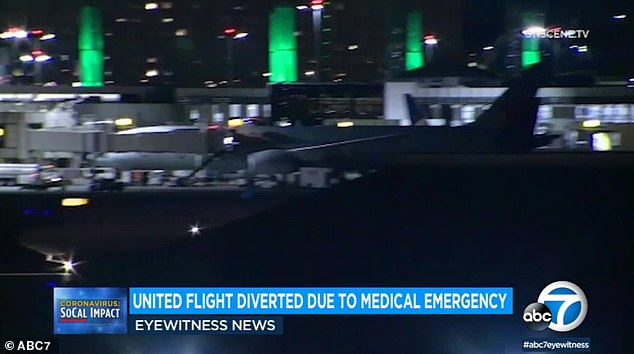 The plane, pictured at the gate in LA, made an emergency stop in New Orleans and the man was pronounced dead. The plane, and all its passengers, then continued to LA 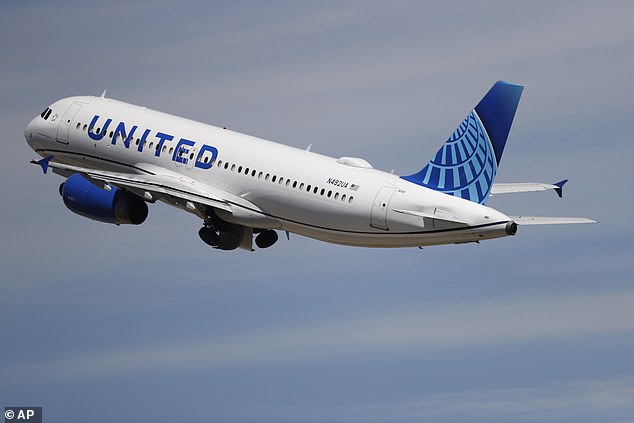 ‘Can I ask how you guys let a covid positive man on my flight last night?’ said one woman.

‘He was shaking and sweating boarding the plane. He was clearly sick and then died mid flight. We had an emergency landing in New Orleans and we didn’t even switch planes afterwards.

‘We all sat there for hours waiting while you guys cleaned up his blood and germs with wet wipes. Is this how you guys handle other people’s safety and health?’

She said that the airline’s claim that they believed he had a heart attack was ‘laughable’, adding: ‘There was never any mention of we are diverting this flight because of cardiac arrest reasons.

‘Everyone was aware this was COVID related because the wife was relaying his medical information, and shared he was in fact COVID positive and symptomatic for over a week. That is them covering up the fact that they handled this situation poorly.’

Another woman, named Shay, also tweeted angrily at United, accusing them of failing to check on the passengers before boarding, and criticizing the man and his wife for flying.

‘United, why did you never check our temperatures before boarding?’ she tweeted.

‘The family of the man, why didn’t you go to the hospital or not let your husband get on the flight feeling like that?

‘An entire plane had to watch him seize or have a heart attack none of us know which, and die.’

Shay said she noticed the man having breathing difficulties.

‘I made eye contact with his wife and looked at him and she just looked down,’ Shay said.

She said the medical team on board tried to revive him for an hour.

‘The family was crying, people were freaking out,’ she said.

‘He was shocked twice, given an epi-pen, 2 shots of adrenaline and mouth to mouth after chest compressions…’ 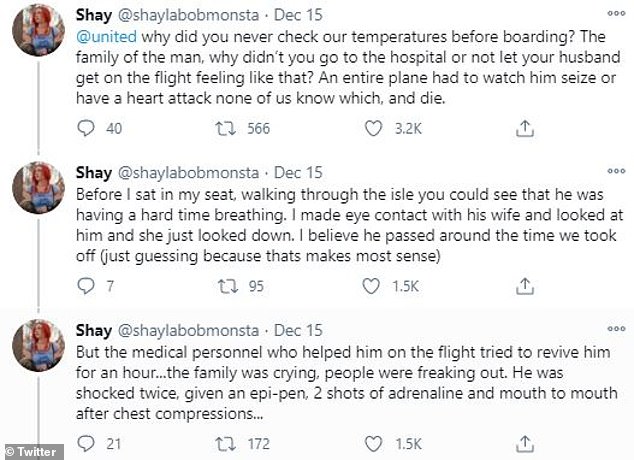 The Centers for Disease Control and Prevention (CDC) asked United for the passenger manifest so other passengers can be told that they might have been exposed to a disease, spokesman Charles Hobart said.

The passenger had filled out a form before the flight saying he had not tested positive for COVID-19 and had no symptoms of the disease caused by the novel coronavirus, according to the airline.

‘It is apparent the passenger wrongly acknowledged this requirement,’ United said.

United said the CDC did not specify the man’s cause of death, and United does not know whether it was COVID-19.

But, the airline said, the man’s wife was overheard telling an emergency medical technician that he had shown symptoms of the disease, including loss of taste and smell. 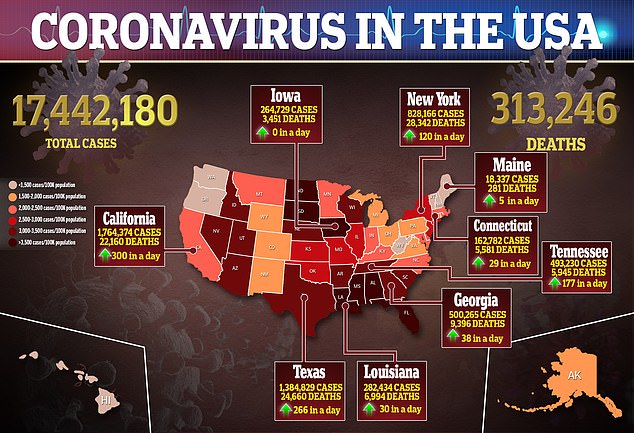 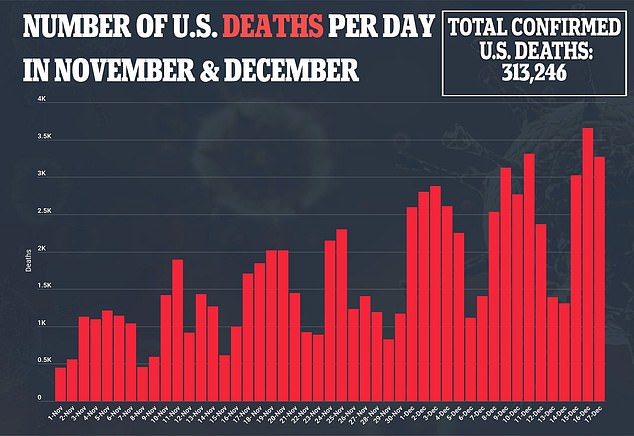 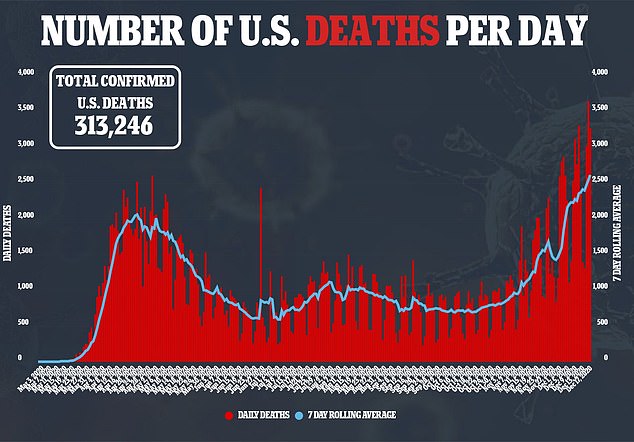 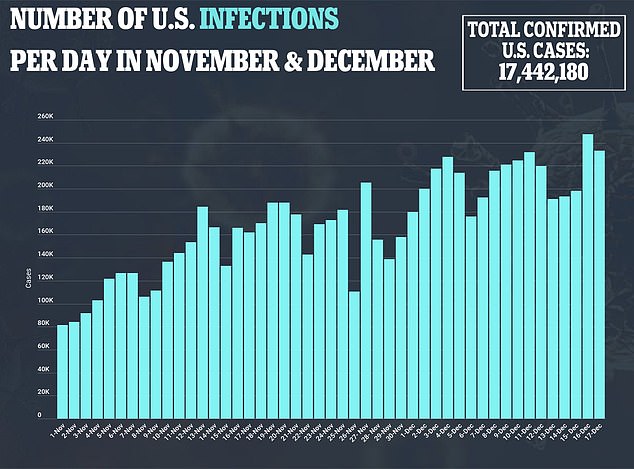 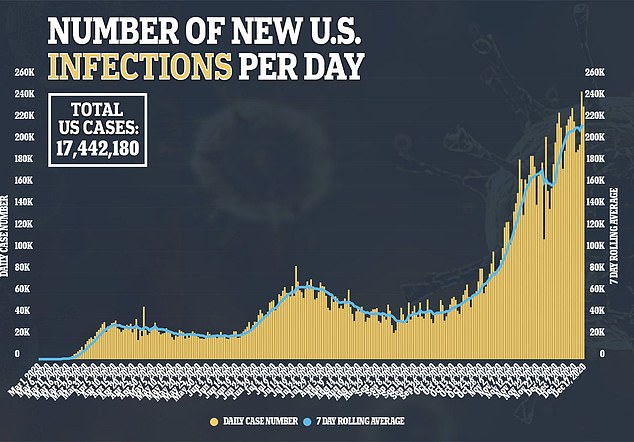 The CDC is collecting information to decide whether further public health action is appropriate, an agency spokesman said in a text message.

‘To protect the privacy of the individual, we aren’t providing this information to the public,’ the CDC spokesman told AP.

All four flight attendants were quarantined for two weeks once they arrived at Los Angeles, ‘per written guidelines,’ said Taylor Garland, spokeswoman for Association of Flight Attendants.

‘Our union continues to provide support to the crew,’ Garland said.

‘We urge passengers to comply with airline COVID policies and stay home if you´re sick.’

The man was taken to a hospital in New Orleans where he was pronounced dead, according to the airline.

Hobart said United originally was told that he died from heart trouble, so passengers were allowed to stay on the plane and complete the flight to Los Angeles or take a later flight.

The airline said all passengers stayed on the plane.