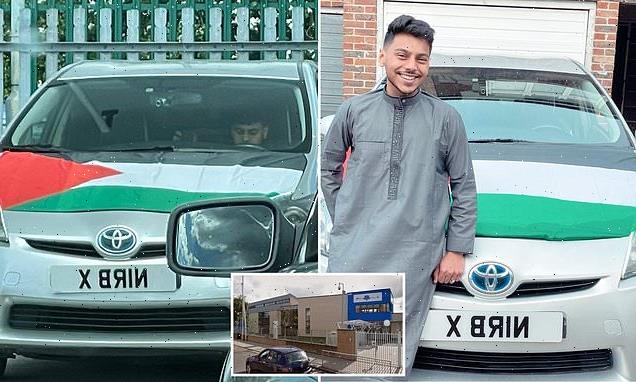 A student has been slapped with a £90 fine after he drove to collect his sisters from a Jewish school with a Palestinian flag draped across the bonnet of his car.

Samiul Islam parked up outside the Kantor King Solomon High School, in Barkingside, east London, while waiting for his siblings.

He claims a man and a woman confronted him and complained about the print on his Toyota Prius.

He also alleged that members of the public made offensive comments about Palestine.

Ten cops in six police cars then swooped on the Bangladeshi student and handed him a £90 fine by officers claiming he had been causing ‘harassment and distress’ in breach of a Public Order Act.

The 20-year-old branded the decision to hit him with a fine ‘stupid’ and ‘disgusting’ and he plans to appeal it. 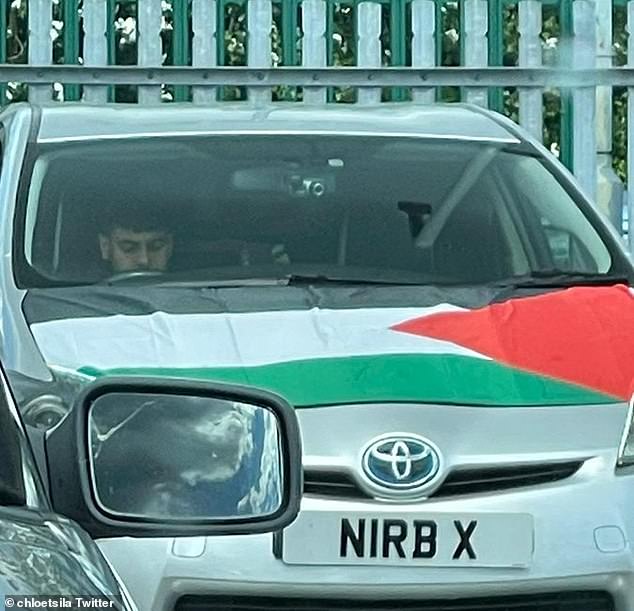 Samiul Islam parked up outside the Kantor King Solomon High School, in Barkingside, east London, while waiting for his siblings 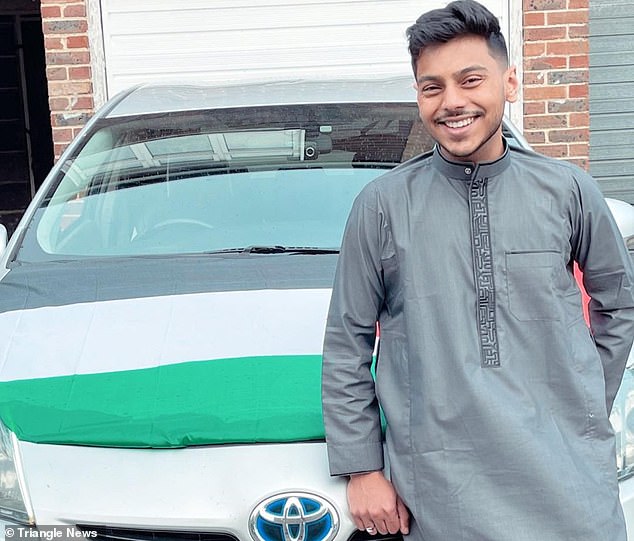 Samiul Islam (pictured next to his car) parked outside the Kantor King Solomon High School, in Barkingside, east London 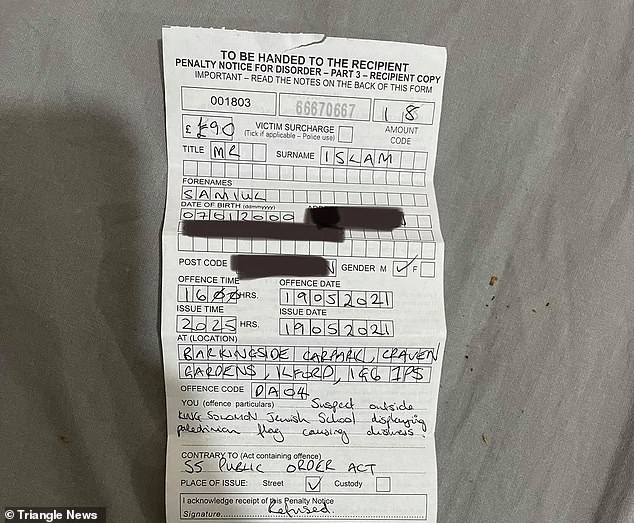 University student Samiul said: ‘It’s just so stupid that they were scared of a flag when I haven’t done anything other than sit in my car waiting for me sisters to come out so I can take them home.

‘It’s disgusting. How does someone with a flag on their bonnet cause the public a threat. And how does having a flag harass and cause distress to someone.

‘I’ve been harassed by three members of the public for sitting in my car and using the phone.

‘But to them I’m a bigger threat because I have a flag on my bonnet which caused them to call for six other police cars to come.

‘There were around 10 officers for what over a flag when they could be out there dealing with real criminals and crimes.’ 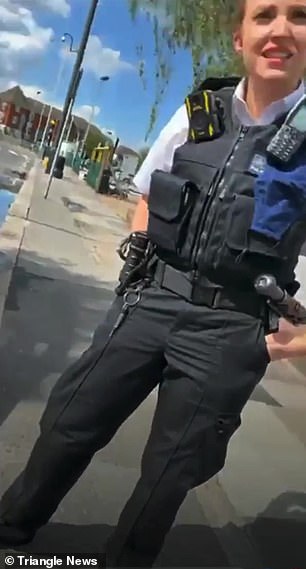 He filmed the altercation in the car park of Kantor King Solomon High School, in Barkingside, east London. Pictured: He discusses the incident with a police officer

He filmed the altercation in the car park of Kantor King Solomon High School, in Barkingside, east London.

A woman can be seen recording him as she holds the hand of a young girl and standing next to a white car.

The woman can be seen holding her phone up, appearing to record the young man.

He can be heard asking her: ‘Go on, what were you saying? Public car park. She said you’re going to get done. You f***ing did, you well did.’

As he speaks the woman appears to turn to the white car’s driver and tell them: ‘Look at him shouting at me.’

She then replies: ‘I didn’t say anything to you, I was talking to this lady here.’

In a second video, Mr Islam can be seen discussing the incident with a police officer.

She tells him that he can display what he wants on his car ‘as long as it’s not offensive,’ although the 20-year-old was later fined.

Police said a verbal dispute broke out between the driver and a member of the public.

In a statement, a spokesperson for the Metropolitan Police said: ‘At approximately 16:00hrs on Wednesday, 19 May police on a patrol were alerted to a verbal dispute that had occurred between the driver of a car bearing a Palestine flag and a member of the public.

‘Officers spoke to all parties involved. No persons were detained. The driver was subsequently issued with a penalty notice. There were no arrests.’

In a furious Facebook post Mr Islam slammed ‘Zionists’ and claims they told him Palestine was ‘going to get done’.

He wrote: ‘Got FINE cos ‘Palestine Flag Was Causing Distress.’ What the f*** is this. What have I even done?

‘This is Disgusting… Zionists. I’m picking up my sisters from school and I’ve got the Palestine flag on my car bonnet (sic).’

He explained: ‘I’m in the car park…picking up my sisters and this guy comes up to me saying that Palestine is [going to] get done. 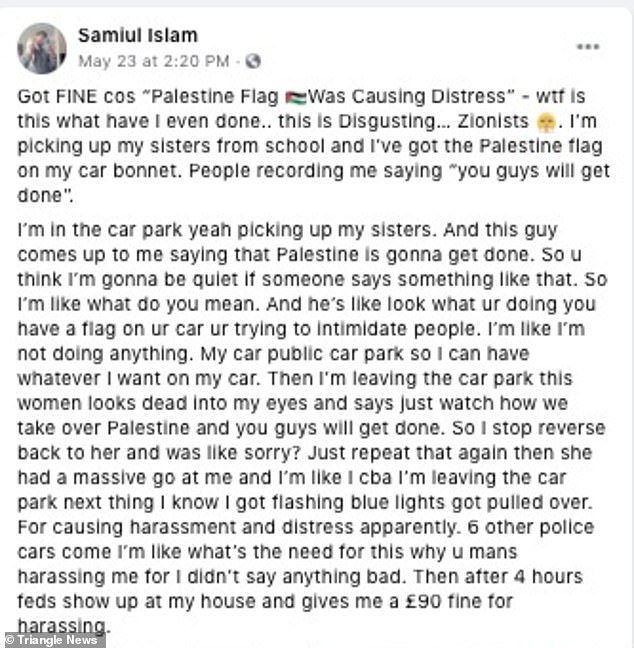 He also vowed to fight the fine, adding: ‘I most certainly am taking it to court. I’m not paying that never’

‘So you think I’m gonna be quiet if someone says something like that.

‘So I’m like what do you mean, and he’s like look what [you are] doing you have a flag on [your] car [you are] trying to intimidate people. I’m like I’m not doing anything.

‘My car [is in a] public car park so I can have whatever I want on my car.

‘Then I’m leaving the car park this woman looks dead into my eyes and says just watch how we take over Palestine and you guys will get done. (sic)

‘So I stop reverse back to her and was like sorry? Just repeat that again then she had a massive go at me and I’m like I [can’t be a***d].

‘I’m leaving the car park next thing I know I got flashing blue lights [and I have been] pulled over for causing harassment and distress apparently.

‘Six other police cars come. I’m like what’s the need for this why [you] mans harassing me for, I didn’t say anything bad.

‘Then after four hours feds show up at my house and give me a £90 fine for harassing.’

He also vowed to fight the fine, adding: ‘I most certainly am taking it to court. I’m not paying that never. Disgusting behaviour that is.’

A spokesperson for Kantor King Solomon High School declined to comment on the incident.