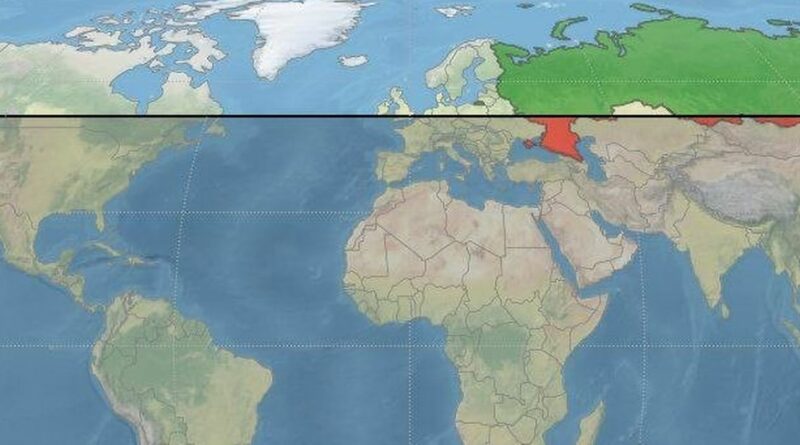 Russia has shared a horrifying map showing where the ISS could crash following a warning from the country's space agency that it could be fired back to Earth amid sanctions against Russia.

NASA had scheduled the ISS, which is home to American NASA astronauts, to be decommissioned in 2031, but experts fear it could come to an end much sooner if the Kremlin decide to cut ties.

Russian President Vladimir Putin could decide the fate of the ISS amid international sanctions placed on Russia during their invasion of Ukraine.

Dimitry Rogozin, the head of Roscomos, sparked fears of decoupling the engines after sharing a terrifying map of where Russia could let the ISS crash, Express reports.

In a post on messaging app Telegram he said the map "just shows that Russia would be least endangered by the destruction of the ISS".

The harrowing map shows that the ISS could crash almost anywhere on Earth, with Russia, part of Northern Europe and Northern Canada remaining mostly safe.

Mr Rogozin warned that western countries, “including those led by the dogs of war" should reconsider “the price of the sanctions they initiated against Roscosmos”.

He added: “The price of international space cooperation maniacally destroyed by the West. Crazy.”

The first two components of the ISS, "Zarya" and "Zvezda," the engines used to raise the ISS out of the upper atmosphere and into orbit, could be decoupled.

The head of Roscomos described the sanctions placed on Russia as "illegal" and said they would disrupt the operations of Russian vehicles servicing the ISS.

Mr Rogozin listed the Russian segments' utilities, warning that it "provides duplication of the life support systems of the American segment".

The utilities, which include obtaining oxygen, removing carbon dioxide, and removing harmful impurities from the atmosphere, could be knocked off if Rogozin's threats come true.

He added: "Also, Russian means provide backup of voice and telemetry communications of the American segment of the station with ground control points."

The ISS, which orbits 248 miles above Earth, is a joint programme between Russia, the United States, Japan, Europe and Canada.

To get stories from Daily Star delivered straight to your inbox sign up to one of our free newsletters here.

But if Russia pulls the plug on the ISS programme, Rogozin says that a map he shared on social media proves "that Russia would be least endangered by the destruction of the ISS."

Speaking out against the sanctions, Rogozin said: "Do you want to destroy our cooperation on the ISS? This is how you already do it by limiting exchanges between our cosmonaut and astronaut training centres.

"The ISS does not fly over Russia, so all the risks are yours. Are you ready for them?"