From Wall Street in 1661 to Central Park in 1860: Maps of New York City show how it grew into a VERY Big Apple, as it evolved from a new Dutch colony to a modern metropolis

A stunning exhibit of New York’s cartographic history is currently being displayed at the New York Public Library.

Titled ‘Picturing the City,’ the maps illustrate the ‘Big Apple’s’ cartographic evolution, spanning six centuries from ‘Manhattan’s earliest days as the hub of a new Dutch colony to a lighthearted depiction of the city in the 22nd century.’

The documents offer a rare glimpse into how early mapmakers shaped the contours, and perceptions, of one of the world’s great metropolises.

Maps of New Amsterdam commissioned during the 40 year period of Dutch rule (1624 – 1664) are rife with blemishes and exaggerations, while just decades later the surveys are illustrated with remarkable accuracy.

The New York Public Library display, curated by Katharine Harmon and Ian Fowler, will be open until July 16. 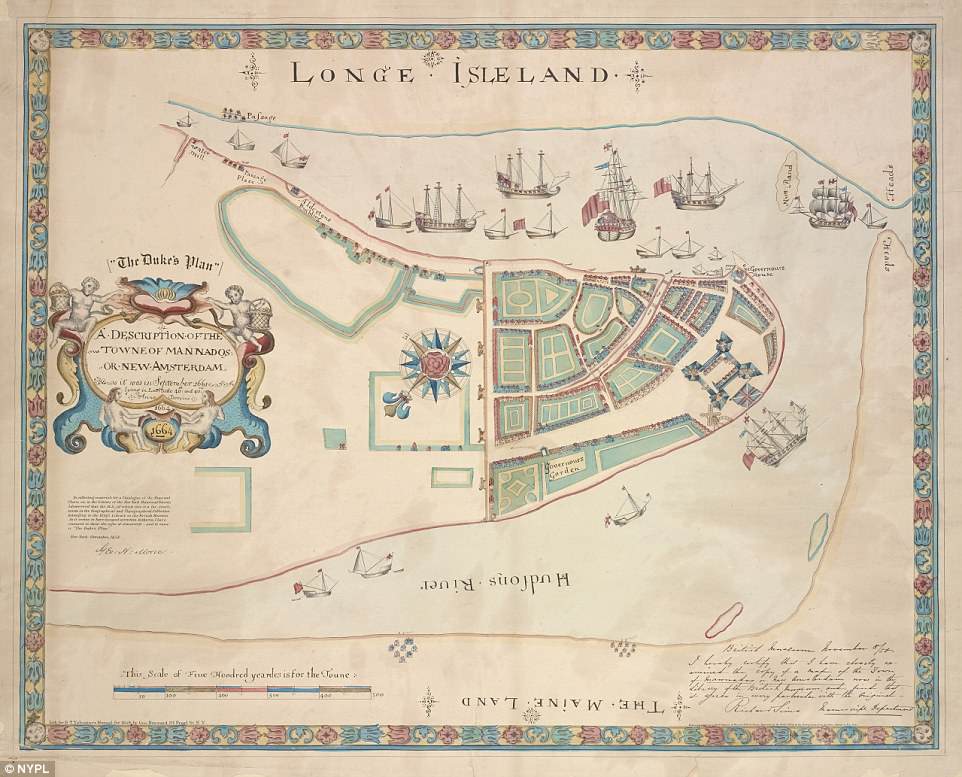 A map describing the town of Mannados, or New Amsterdam, as it was in September 1661. Visible in the drawing is the wall at the northern end of the settlement, now known as Wall Street (Published in 1859). The wall can be seen in the middle of the picture running vertically separating the built up part of the city on the right-hand side with the rest of the island 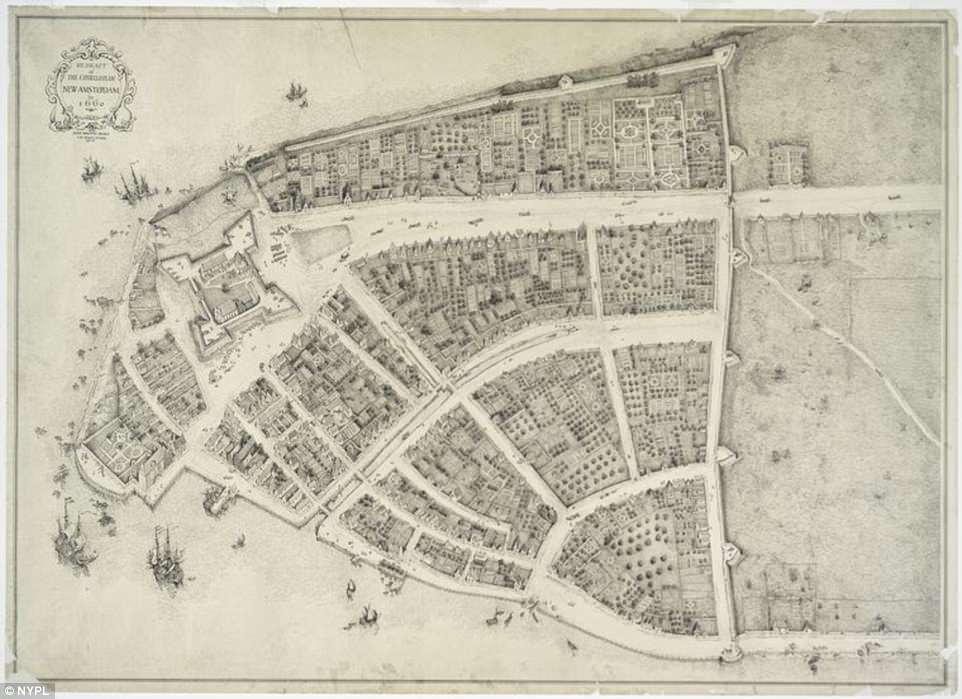 This hand-crafted illustration is a recreation of the Castello Plan, the oldest known known map of New York. Drawn by American illustrator James Wolcott Adams in 1916, the original was sold to Cosimo de’ Medici, Grand Duke of Tuscany, around 1667 and ‘rediscovered’ 223 years later 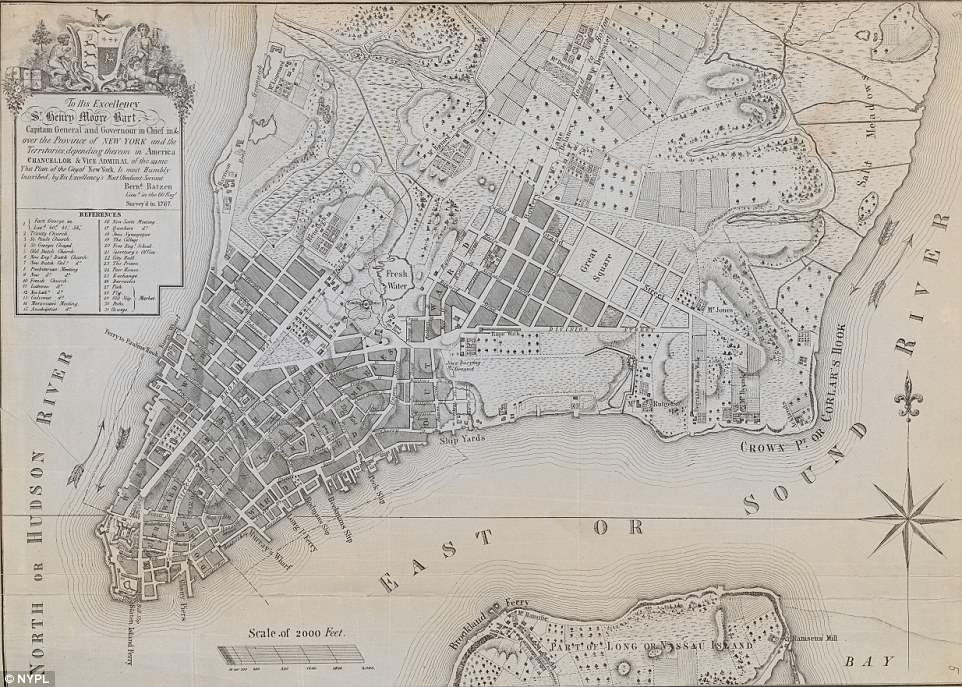 This illustration published in 1854 shows a ‘Plan for the City of New York’ when it was surveyed in 1767, nearly a decade before the start of the American revolution 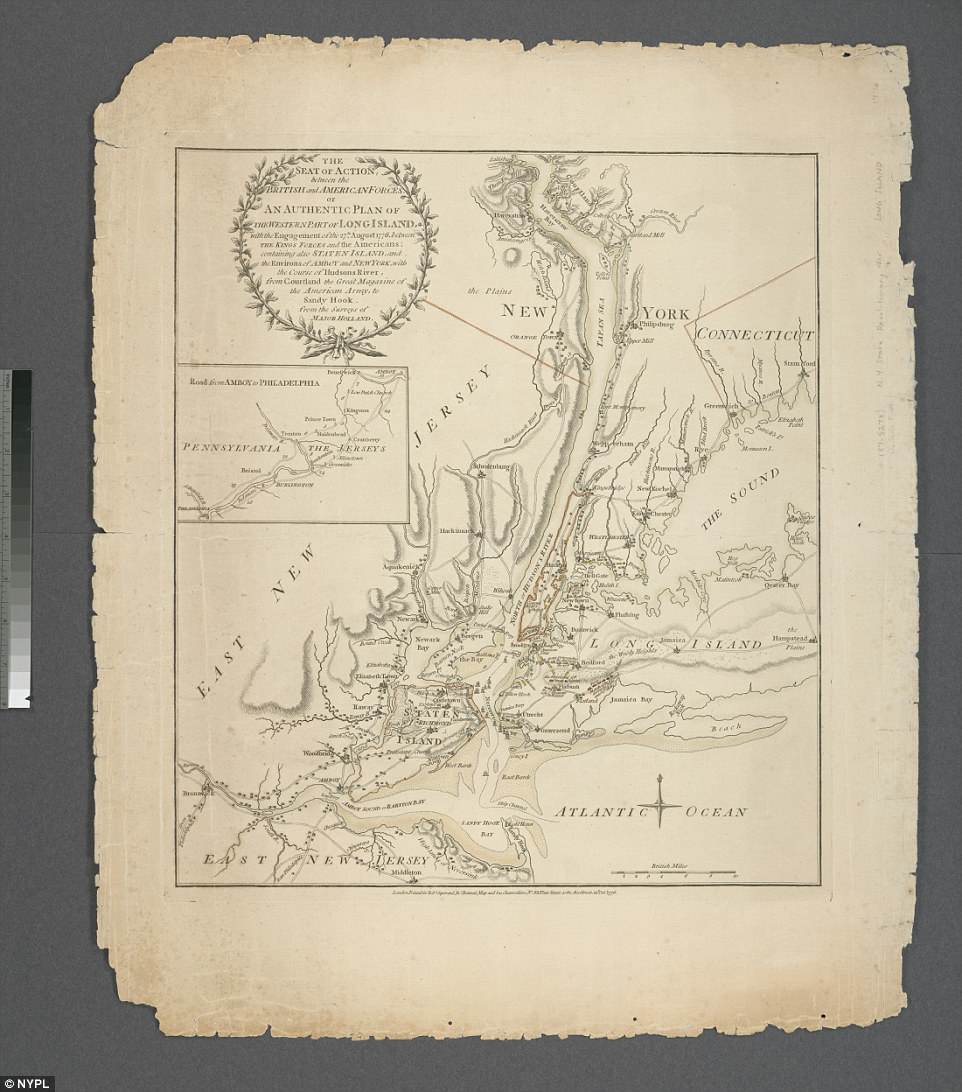 This map commissioned in 1776 depicts the ‘seat of action between the British and American forces,’ otherwise known as ‘An Authentic Plan’ and shows ‘Staten Island, and the environs of New York’ 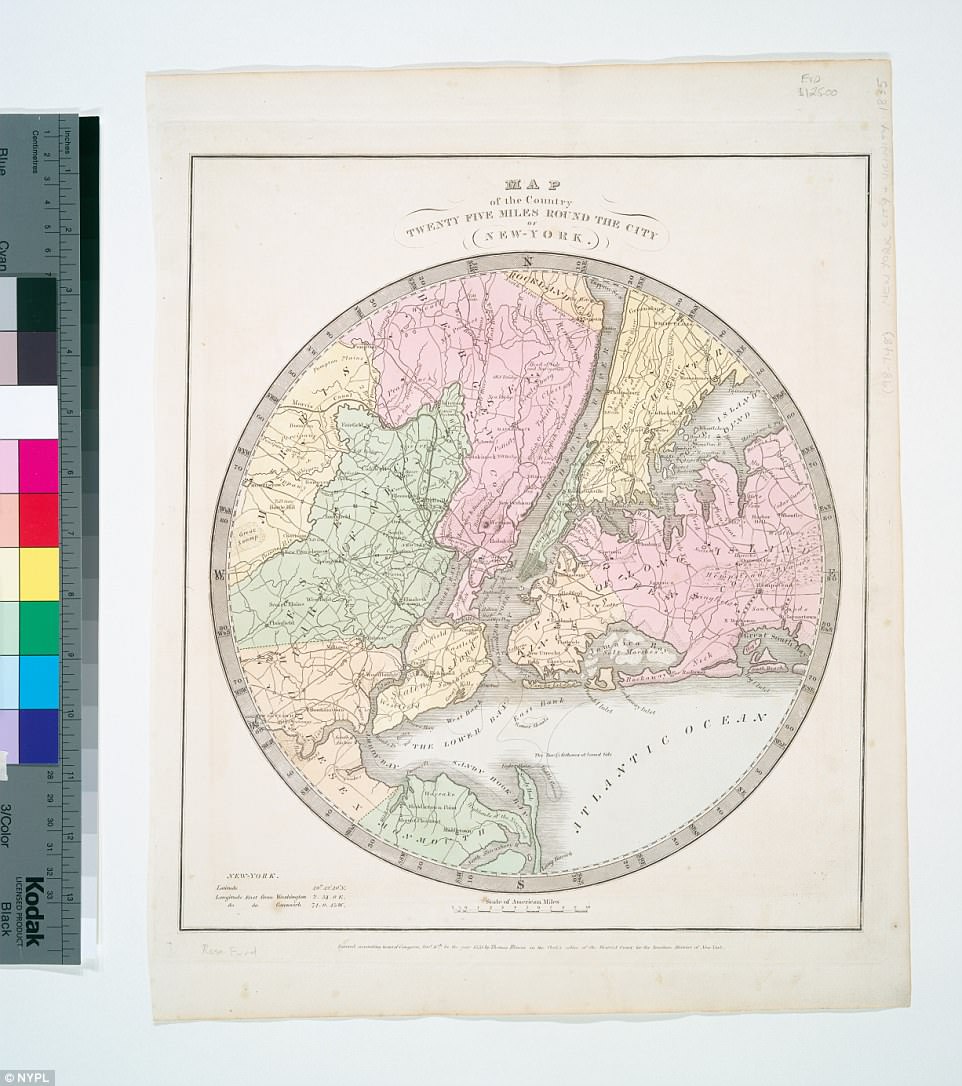 Commissioned in 1835, this illustration is called ‘Map of the Country – Twenty Five Miles Round The City or (New York).’ The map also encompasses parts of New Jersey 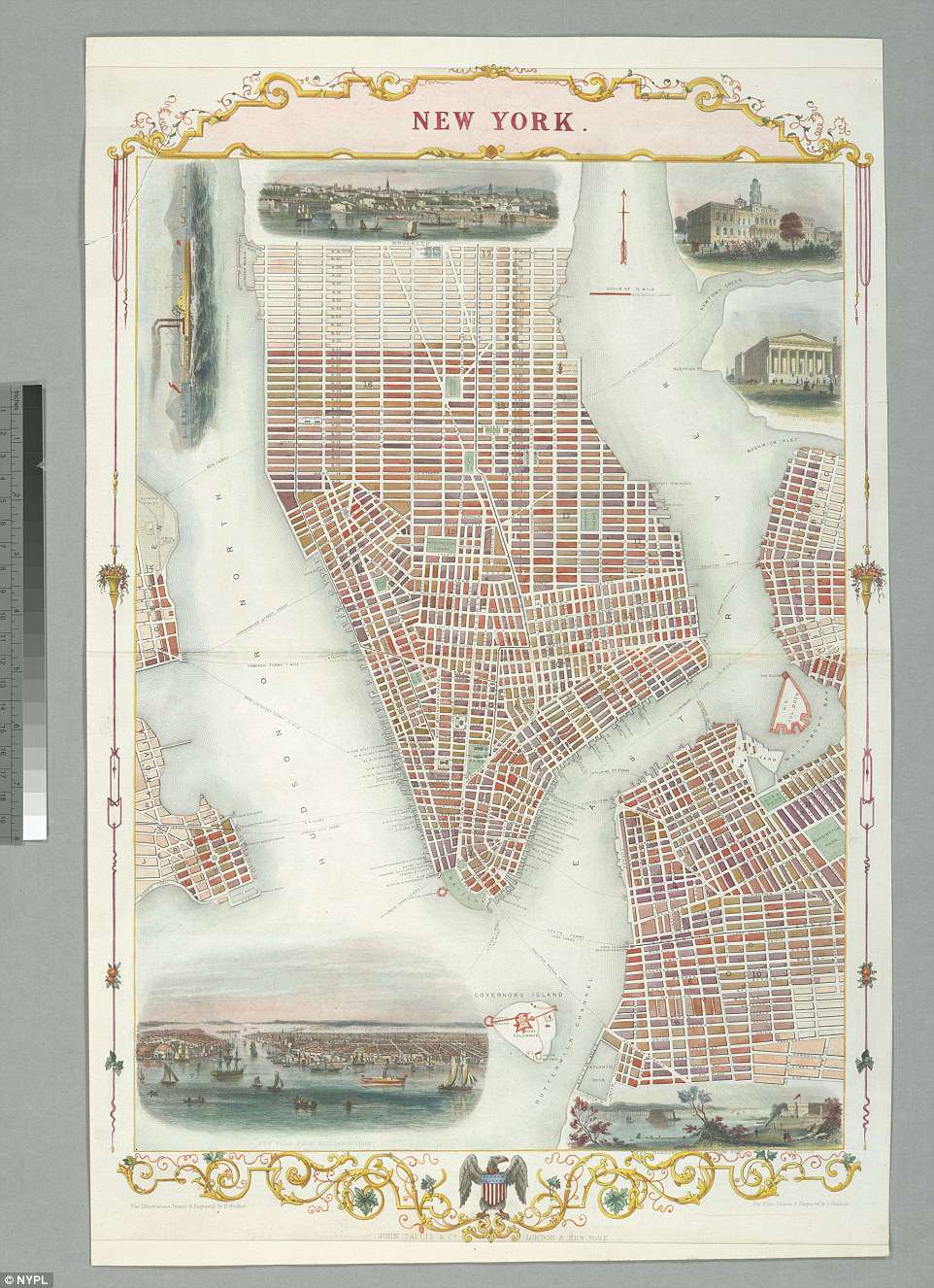 Produced for the Great Exhibition in London in 1851, this map shows Manhattan from Forty-Second Street South to the Battery in exquisite detail and is still considered a masterpiece 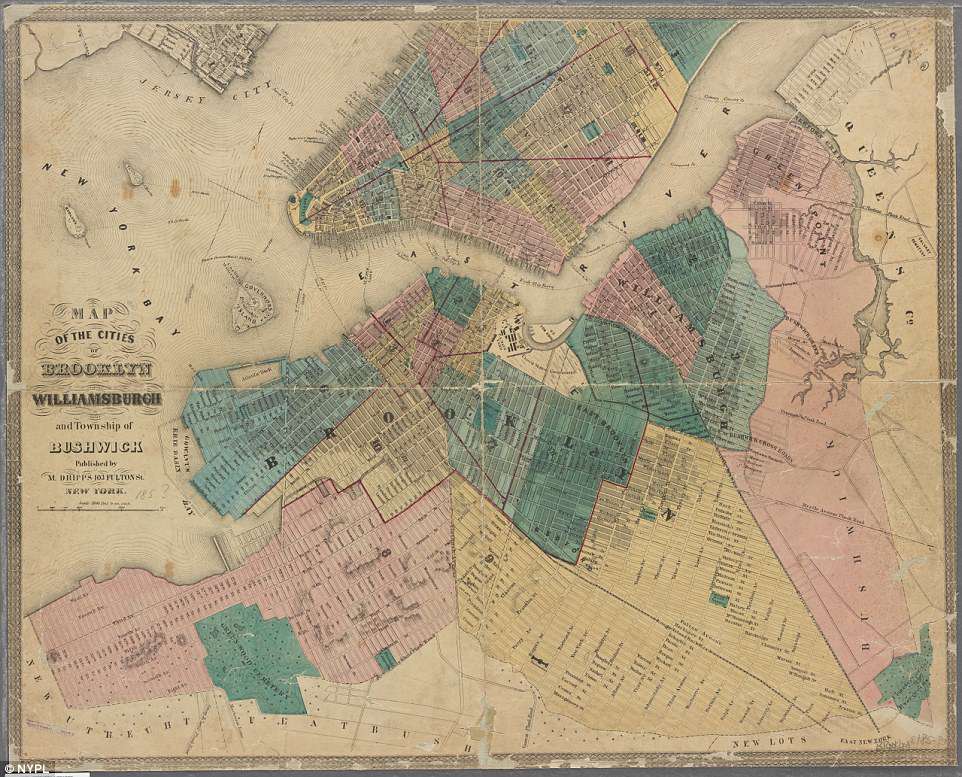 This illustration made in 1860 shows the ‘Plan of the Central Park,’ three years after the park was established in 1857 on 778 acres with construction beginning one year later 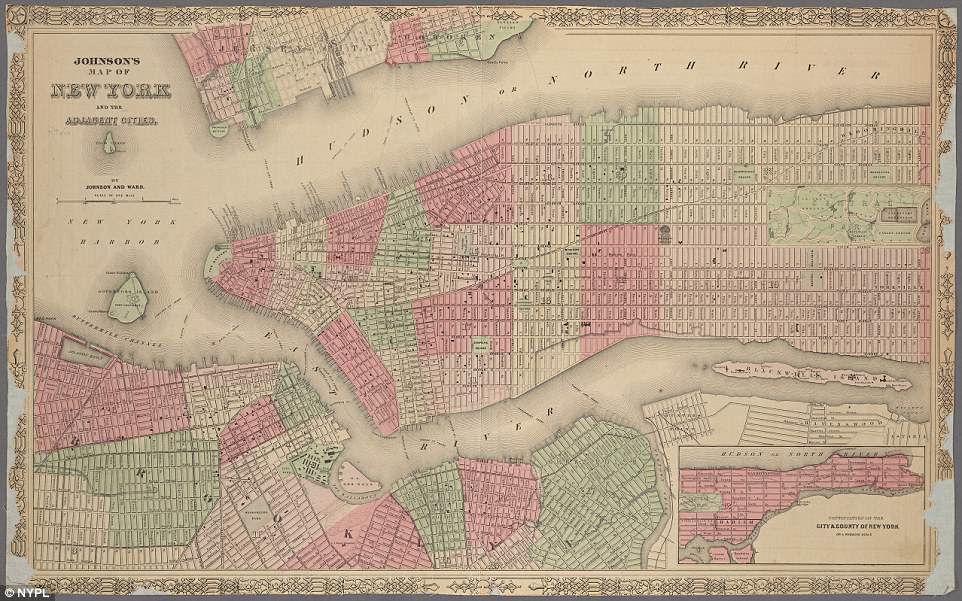 Near the forefront of the atlas publication industry for a quarter century was mapmaker Alvin Jewitt Johnson, who commissioned this map of lower Manhattan and its surrounding environs in 1860 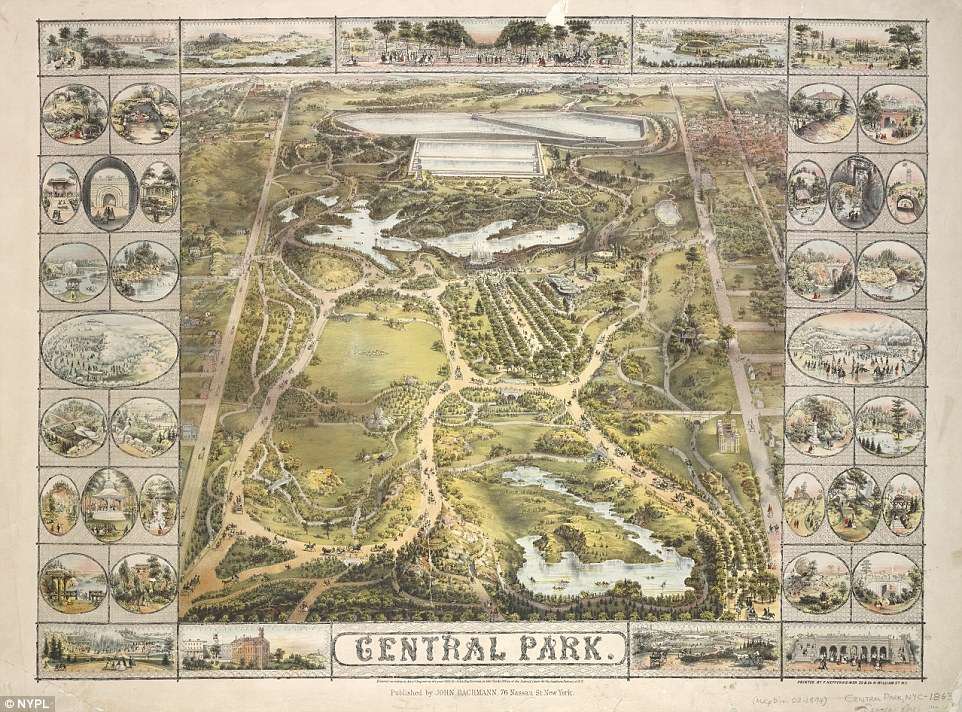 The exhibit, titled ‘Picturing the City,’ shows the Big Apple’s cartographic evolution and spans six centuries from ‘Manhattan’s earliest days to lighthearted depictions in the future.’ This exquisitely detailed  map of Central Park dates back to 1863 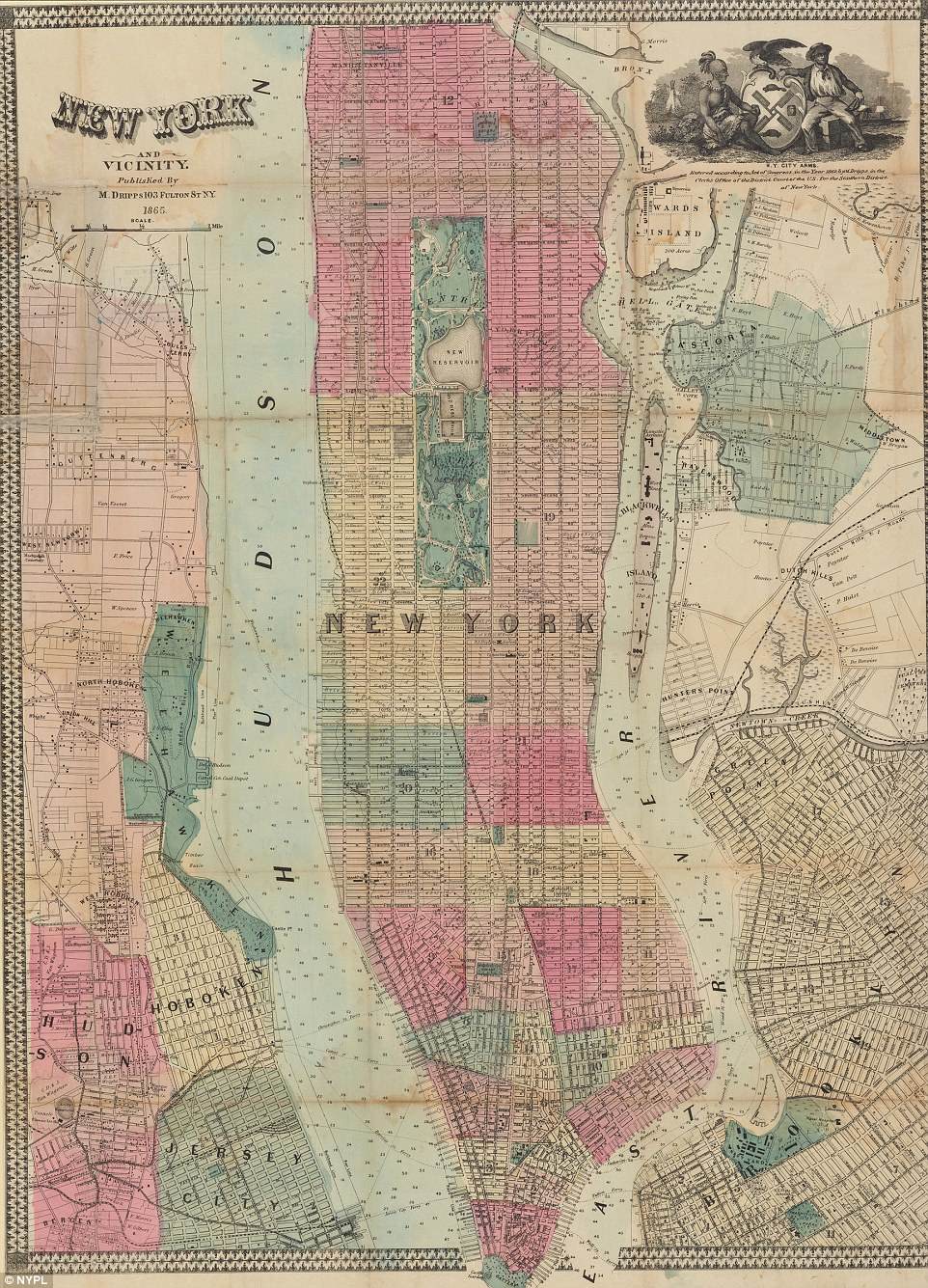 Created in 1865, this color coded map of ‘New York and Vicinity’ was published by Matthew Dripps whose office was located on 103 Fulton St. in Downtown Manhattan. 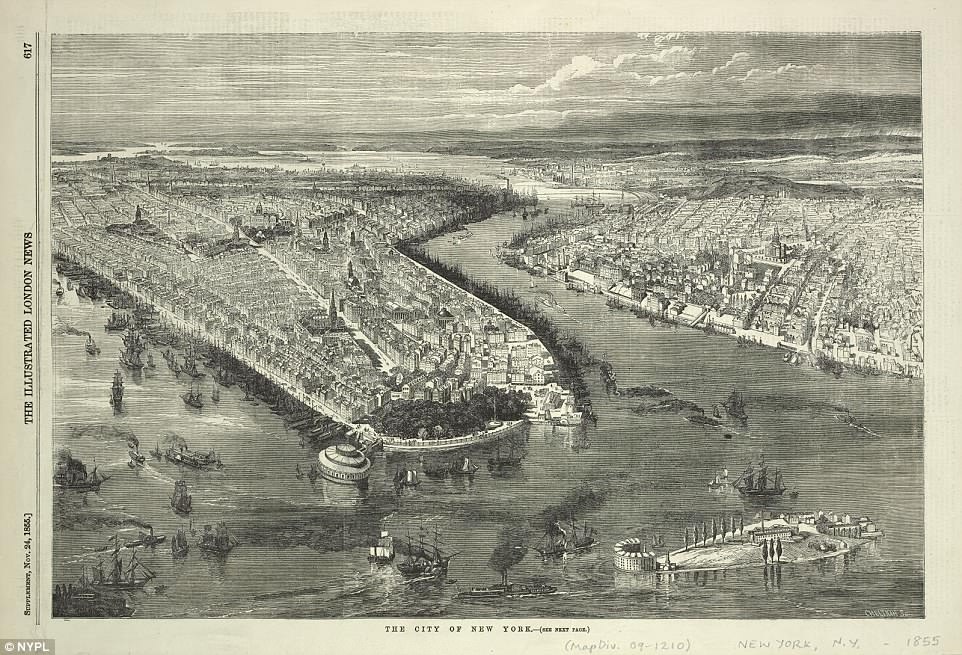 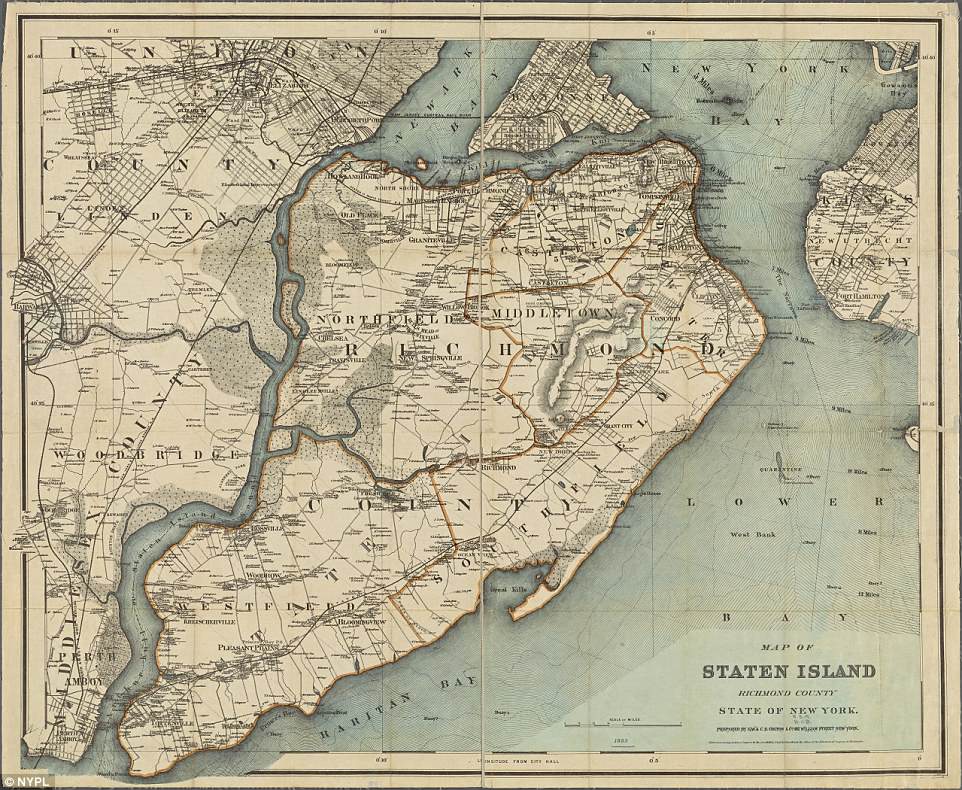 The exhibit also features the earliest known map of New York in existence commissioned during the 40 year period of Dutch rule between 1624 – 1664 (Map of Staten Island, 1889) 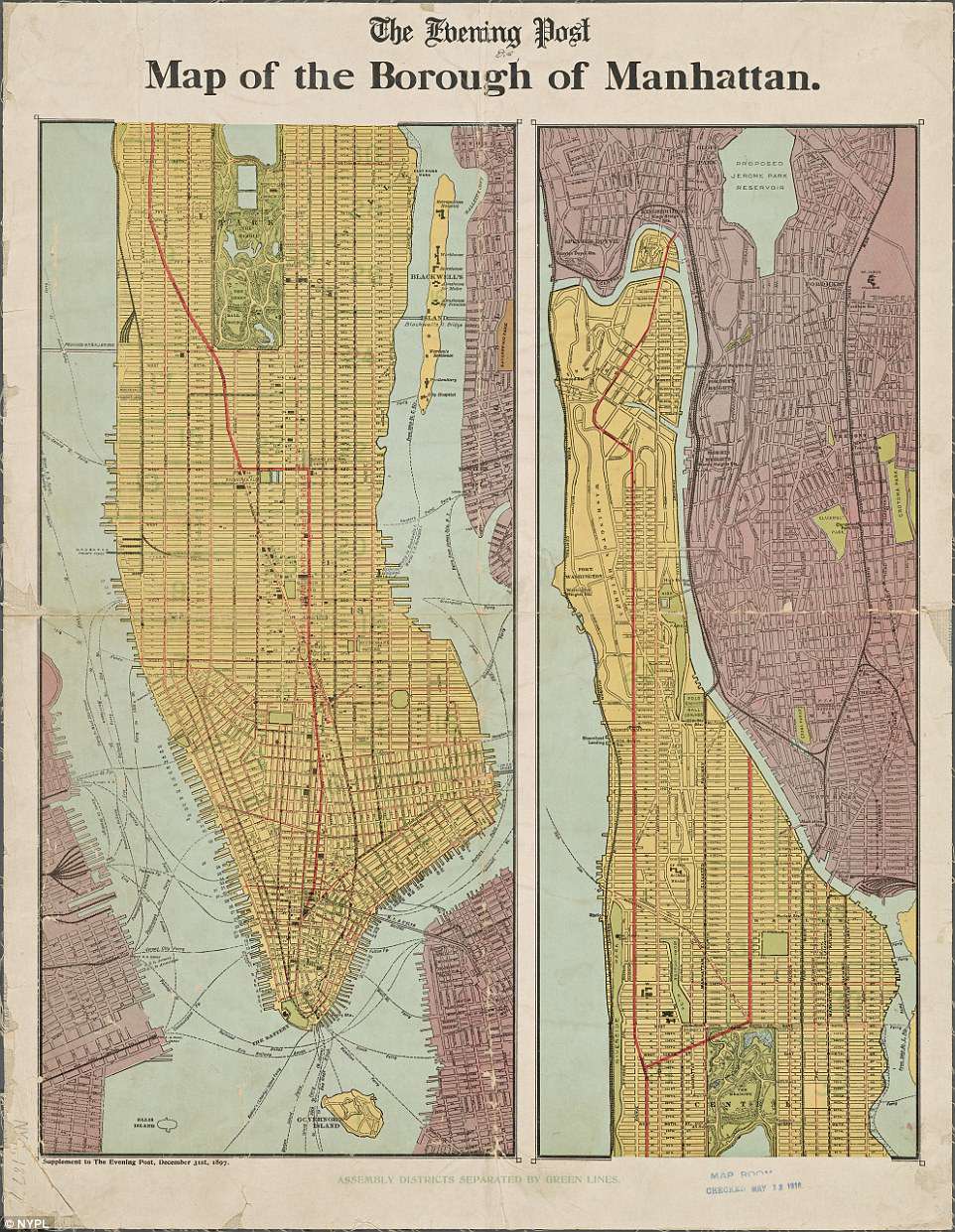 A supplement featured in the Evening Post, this ‘Map of the Borough of Manhattan’ was printed in 1897 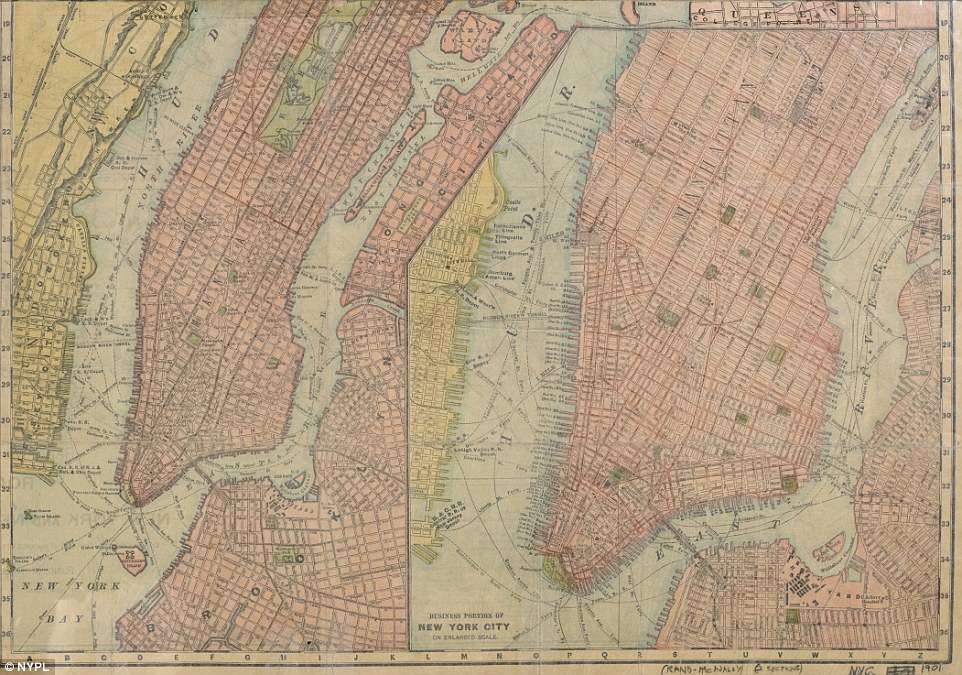 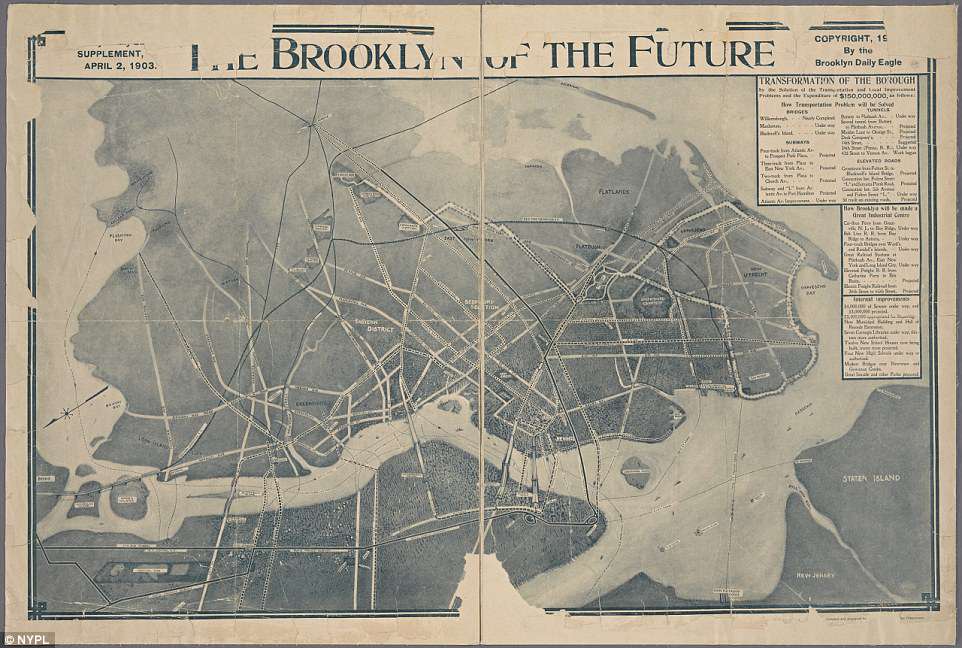 ‘Transformation of the Borough’: Titled ‘The Brooklyn of the Future,’ this survey was commissioned in 1903 and appears to tout major infrastructure projects in the area designed to connect it with the rest of the city

Illustrated six years before his death, German-born artist Henry Wellge made this bird’s eye view panorama of New York in 1911 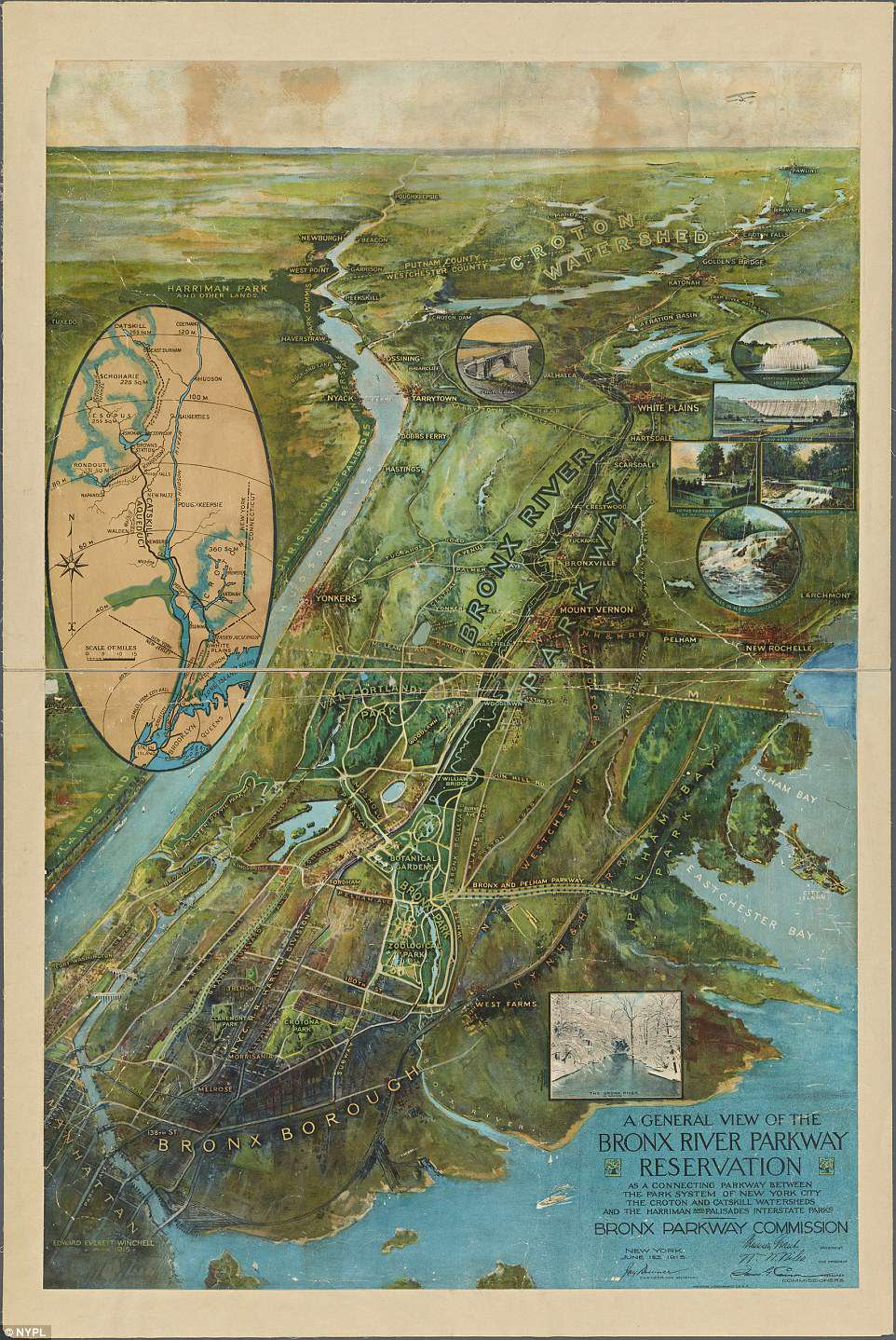 This exquisite map completed in 1915 shows The Bronx River Parkway, known as the first ‘open landscaped highway” in the nation, and the linear ‘reservation’ surrounding it

Map of the borough of Manhattan and part of the Bronx showing location and extent of racial colonies, 1920 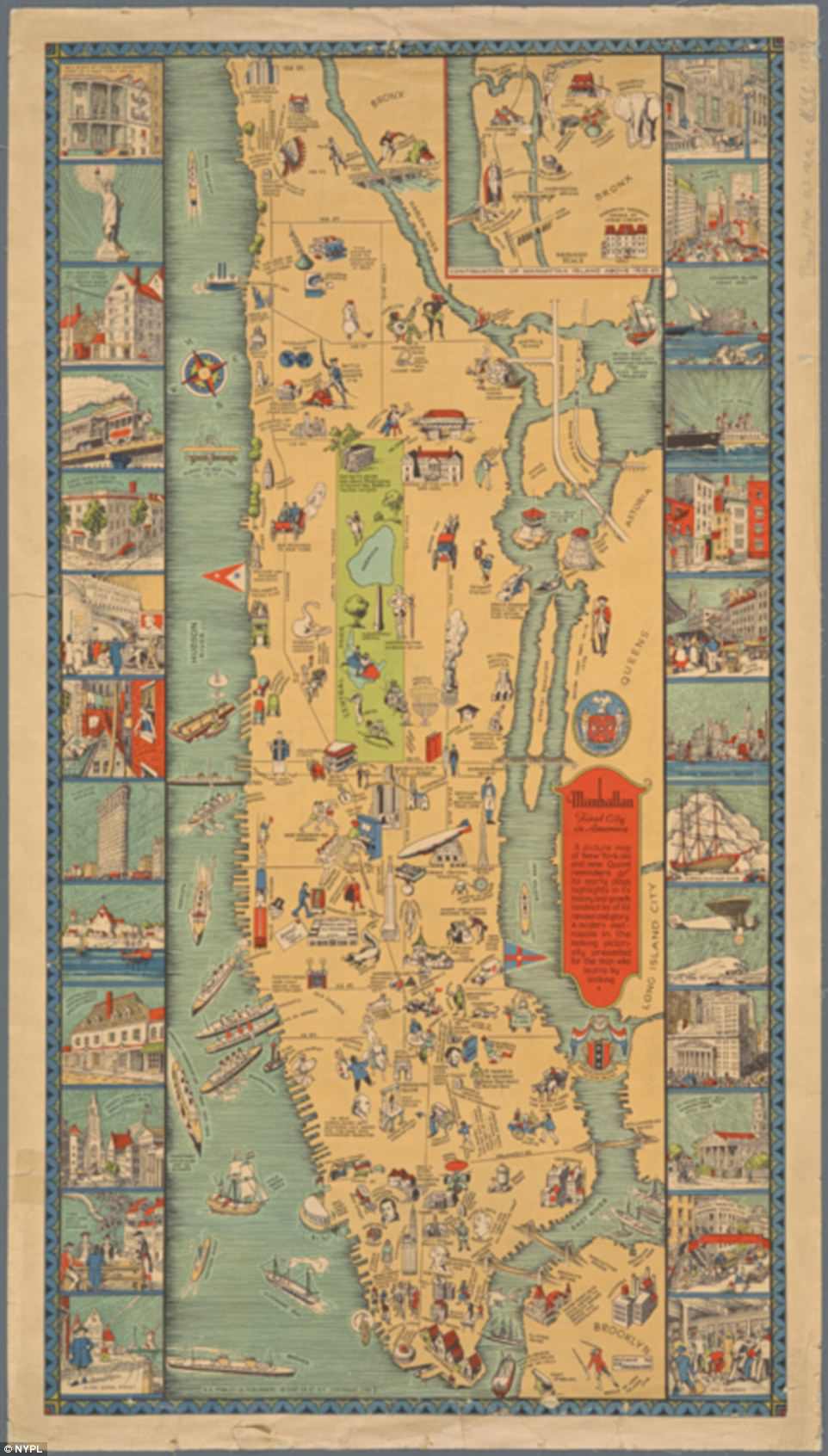 Drawn by C.E. Millard in 1933, this map shows the ‘modern metropolis in the making, pictorially presented for the man who learns by looking.’ This illustration is packed with whimsical figures, with pictorial insets to help viewers 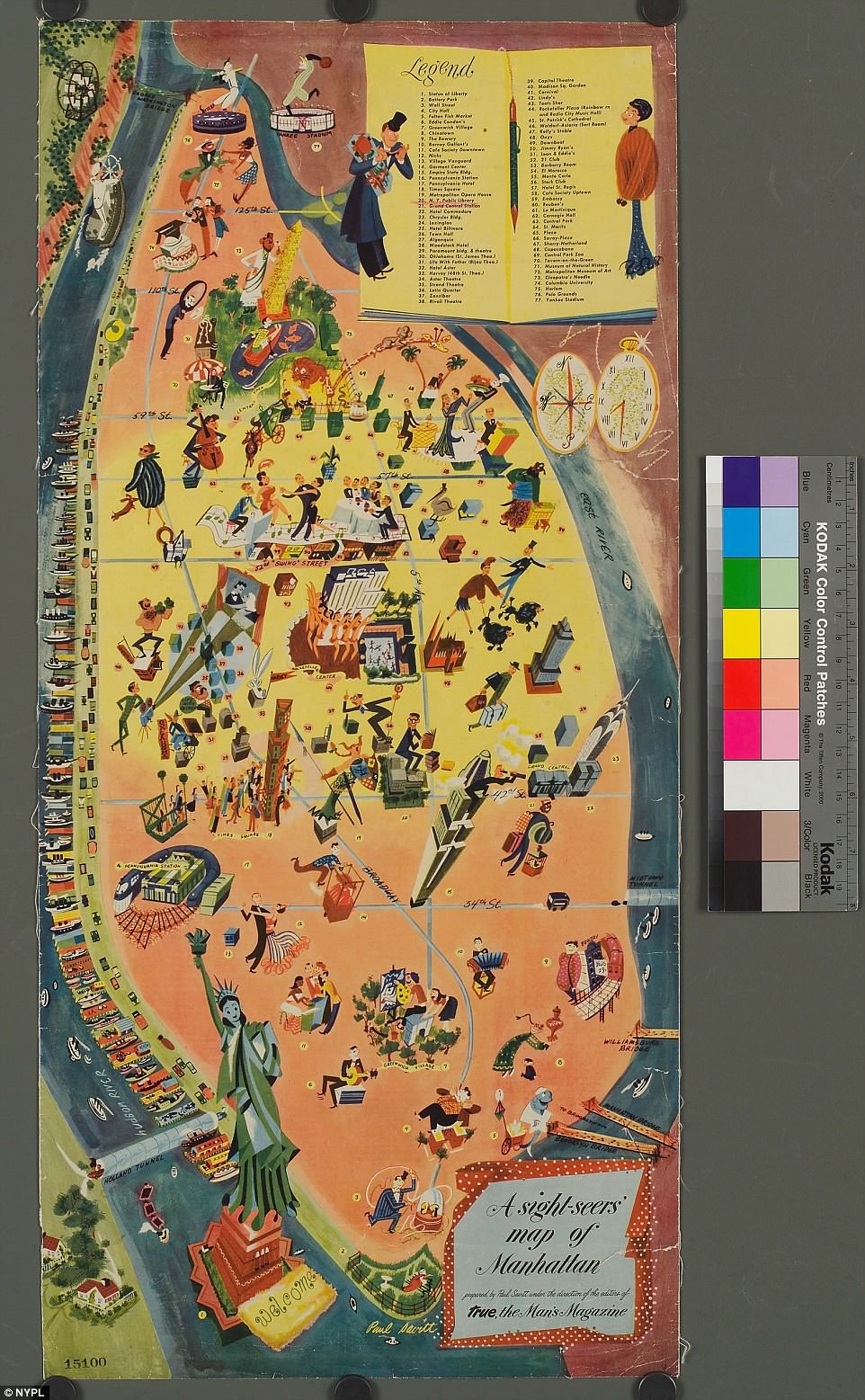 Created in 1946, this sight-seers’ map of Manhattan shows the best of the Big Apple, showing the Rockettes towering over the ice skaters at Rockefeller Center, a Yankee pitcher facing off against a Giants batter, along with a list of places to take a date out in the city