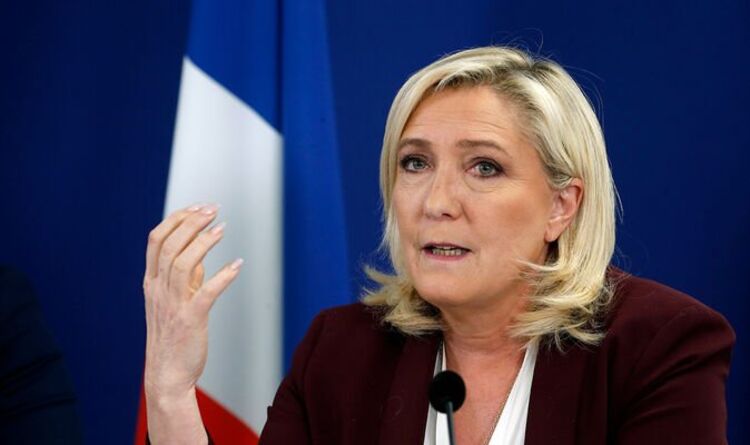 The French election is approaching as President Emmanuel Macron aims to hold onto power under the challenge of rival Marine Le Pen. Ms Le Pen challenged Mr Macron in 2017, but was beaten comfortably in the second round of voting. This time round, the far-right leader of the National Rally appears to be closer to the presidency as the polls tighten. The latest Ipsos Sopra Steria Cevipof poll for Le Monde newspaper on Wednesday gave Mr Macron a projected vote share of 26.5 percent to Ms Le Pen’s 21.5 percent in the first round of ballots on April 10.

In late March, Mr Macron’s lead was over 10 points, according to the same pollster.

Ms Le Pen will likely make her feelings known on UK politics should she become president of France.

In January 2019, the opposition figure in France said she would support the UK rejoining a “reformed” EU.

Speaking to the Sunday Times, Le Pen said that she regretted “a little” the fact that Britain would not be around to help change the EU from within.

She said: “Britain voted to leave the EU — it did not vote to leave Europe.

“An alliance of European nations will be the future and the UK could come back. The choice should be between leaving and staying in a reformed EU.”

Ms Le Pen also said in the interview that former Prime Minister Theresa May failed to get Brexit done because she was “playing the game of the EU.”

She added: “Money should not be the driver of everything. We are citizens of somewhere, not citizens of nowhere. We cannot waste this by multiculturalism.

“It is the nation, the nation state. Only the EU cannot see it.”

But Ms Le Pen’s comments in January 2019 are very different to previous comments she has made about Brexit.

She used to be an advocate of ‘Frexit’ – France leaving the EU – and vowed in 2016 to hold a referendum on France’s membership.

The far-right figure then told Nigel Farage in a 2017 interview that the UK had shown leaving the bloc was possible.

She said: “We had been told that it was not possible to leave the EU, and the UK has just demonstrated that, when the people want it, we can set up the conditions to exit the EU. So thank you for showing us the way out of this huge prison.”

Ms Le Pen added that she felt a “sense of relief” after the Brexit vote.

However, after losing the 2017 French election, Ms Le Pen ditched calls for a ‘Frexit’ referendum.

In February 2020, she told Euronews: “Maybe Great Britain can rejoin us once we’ve built something where each nation conserves their freedom.

Macron has ‘enabled the return of Marine Le Pen’ [INSIGHT]

“[Brexit] still took three years … there was a real contempt for the people on the part of leaders of the European Union who barely hid wanting to make the divorce as difficult as possible.”

President Macron has been more consistent on Brexit, criticising it from the outset.

He said: “Look at what happened with Brexit, and so many other elections: what looked improbable actually happened. Nothing is impossible.

“The danger of extremism has reached new heights because, in recent months and years, hatred, alternative truths have been normalised.

“We have got used to see on TV shows antisemitic and racist authors.”