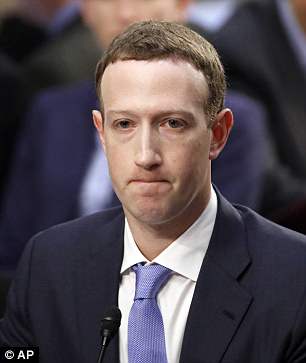 The six investors believe Mark Zuckerberg’s twin roles as CEO and chairman, plus his almost complete control of voting rights, means he can swat away opponents seeking change after a series of scandals. He is seen at a senate hearing on April 10

Facebook investors with nearly $3billion in shares between them are mounting a bid to topple Mark Zuckerberg as chairman following growing anger about his ‘dictatorship’ over the company.

The six investors believe Zuckerberg’s twin roles as CEO and chairman, plus his almost complete control of voting rights, means he can swat away opponents seeking change after the Cambridge Analytica scandal and claims of election meddling.

The rebels are demanding the billionaire relinquish his role as chairman to allow an independent executive to be hired in his place. They also want a change in how voting rights are distributed among shareholders to lessen his power.

The chief executive officer of a company is accountable to the board of directors, which is headed by the chairman.

Zuckerberg fulfilling both roles means he is ‘answerable to no one’, Illinois state treasurer and Facebook investor Michael Frerichs told Business Insider.

Three-quarters of class B shares are owned by Zuckerberg, meaning he commands more than half of the company’s voting power.

Patrick Doherty, the director of corporate governance at the office of the New York comptroller, which oversees more than $1 billion in Facebook stock, slammed the set-up as a dangerous throwback.

‘The idea that there should be an autocrat in charge of a gigantic public company, which has billions of dollars of shareholder money invested in it, is an anachronism,’ Doherty said.

‘It harks back to the 19th century when you had these robber barons who were autocrats and dictators.’ 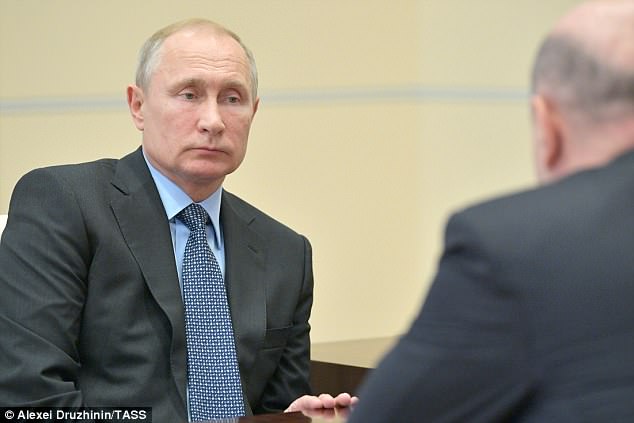 Zuckerberg faced similar criticism at the annual shareholder meeting on May 31, when one investor accused him of acting like Vladimir Putin (pictured in Moscow on Tuesday)

Business Insider did not name the six rebel shareholders they had spoken to. Facebook did not respond to the report, but has previously called its government structure ‘sound and effective’.

Zuckerberg was attacked over similar concerns at Facebook’s annual shareholder meeting on May 31.

The billionaire executive was urged to ‘take a page from history’ and ’emulate Washington, not Putin’, during heated encounters at the session in Menlo Park, California.

Many critics referred to recent Facebook controversies, including Russian interference in the US presidential election, the spread of fake news and concerns over user privacy. 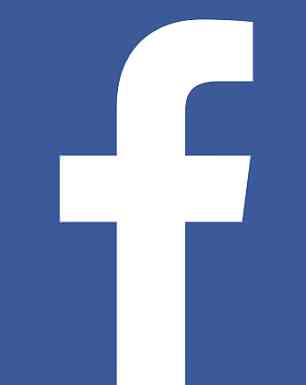 Will Lana of Trillium Asset Management said that his firm had identified ‘at least 15 distinct controversies’ facing the company.

He argued for a change to the board’s approach to risk management to avoid further scandal.

‘The proof of the current structure’s inadequacies is on display in the current headlines,’ Lana said.

A plane pulling a banner that read ‘YOU BROKE DEMOCRACY’ flew over during the meeting.

The aircraft advertised Freedom From Facebook, a group of privacy activists that are pushing the US Federal Trade Commission to split up the company.

Investors also set their sights on Facebook’s recent data scandal, which eventually forced Zuckerberg to speak in front of members of Congress, as well as EU officials.

It was revealed in March that Facebook had handed over the private data of millions users to the now-defunct political consultancy firm Cambridge Analytica.