Facebook CEO Mark Zuckerberg has stopped selling shares of the company after a nosedive in stock prices in the fourth quarter of 2018.

Zuckerberg had sold $5.6 billion of his stake in the social networking site since Q4 of 2017, after a pledge to do so to fund his charitable endeavors.

But that stopped abruptly, with the technology entrepreneur not parting ways with a single share in the final months of the year, as shares dipped by 20 percent amid a market slump, in general, Bloomberg reported on Thursday. 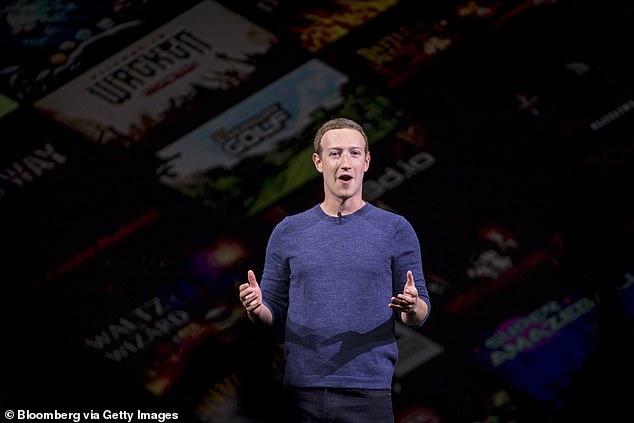 Facebook CEO Mark Zuckerberg has stopped selling shares of the company after a nosedive in stock prices in the fourth quarter of 2018. Zuckerberg is pictured speaking during the Oculus Connect 5 product launch event in San Jose, California on September 26

The marked decline in the Menlo Park, California-based company’s trading price came as the social media platform faced backlash over its user data policies as well as its moderating practices.

Though the effects of the public’s displeasure was felt immediately, Zuckerberg has said those concerns will likely take years to address.

His own wallet was also hit in the scandal, with Zuckerberg’s net worth declining by $32.7 billion as of market closing time on Wednesday.

That reality has bumped him to seventh on the Bloomberg Billionaires index, which lists the world’s wealthiest individuals. 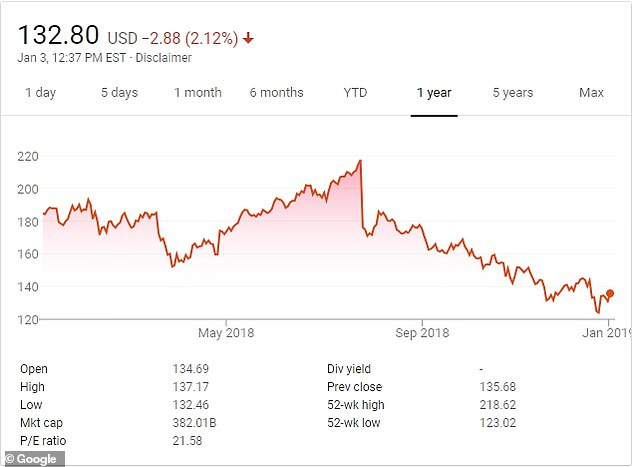 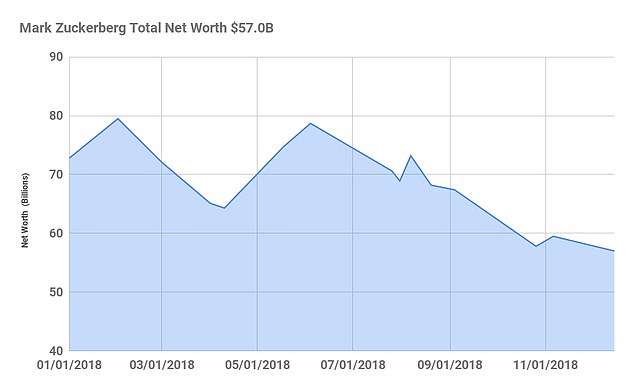 Zuckerberg’s net worth had declined by $32.7 billion as of market closing time on Wednesday

Still, seventh is a pretty nice spot to be in as Zuckerberg, 34,  and his wife, Priscilla Chan, 33, aim to make good on a promise they made in December 2015, shortly after their first daughter was born.

In an open letter to their daughter on Facebook, published on December 1, 2015, Zuckerberg wrote:

‘As you begin the next generation of the Chan Zuckerberg family, we also begin the Chan Zuckerberg Initiative to join people across the world to advance human potential and promote equality for all children in the next generation. Our initial areas of focus will be personalized learning, curing disease, connecting people and building strong communities.

‘We will give 99 [percent] of our Facebook shares — currently about $45 billion — during our lives to advance this mission. We know this is a small contribution compared to all the resources and talents of those already working on these issues. But we want to do what we can, working alongside many others.’

Zuckerberg began making good on that promise in September of 2017 with a pledge to  dump 35-75 million shares over the next 18 months. 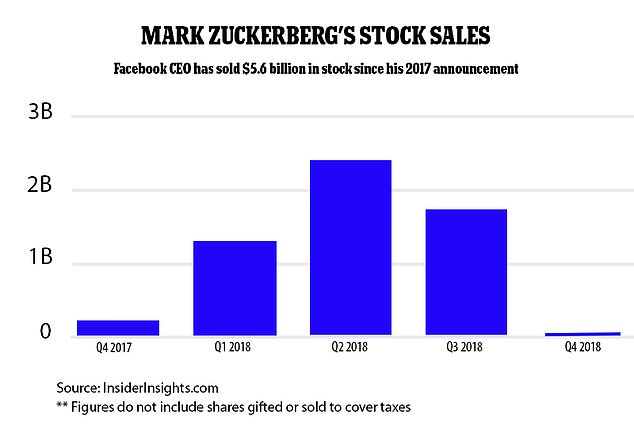 Zuckerberg began making good on a promise to give away most of his wealth during his lifetime in September of 2017 with a pledge to dump 35-75 million shares over the next 18 months. With three months to go, he’s now sold about 30.4 million shares, worth roughly $5.6 billion, despite not selling a single share in the fourth quarter of 2018

While the pause makes sense with stock prices down, it wasn’t necessarily a direct call by Zuckerberg to temporarily pull the plug.

The planned sale of those shares had been scheduled in advance through something called a 10b5-1 trading plans.

Such plans can include safeguards against transactions that fall within certain price or volume parameters.

Zuckerberg isn’t alone, however, in selling off his stock.

That’s the highest amount unload by the top brass since 2016, when they let go of $10.7 billion in shares, according to data compiled by Bloomberg.

That figure is not including stocks that were gifted or sold to cover taxes. 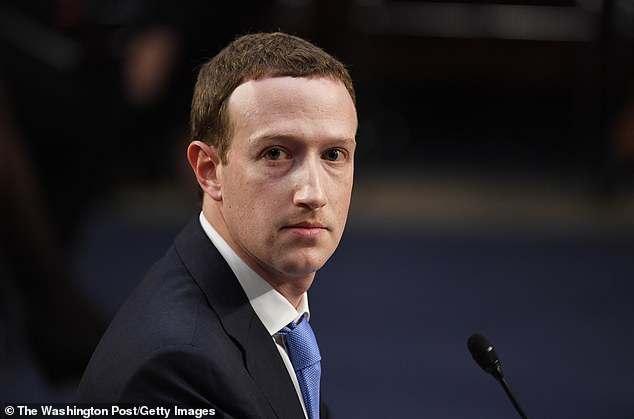 Facebook shares have dropped a total of 39 percent to date, from the site’s record high of $218.62 on July 25. Zuckerberg is pictured during a hearing at the Hart Senate Office Building on April 10 in Washington, DC