Beijing: The 200th anniversary of the birth of Karl Marx on Friday illustrated how times have changed in China, as a group of seven of Donald Trump's trade hawks spent the day in Beijing negotiating over the impending trade war. 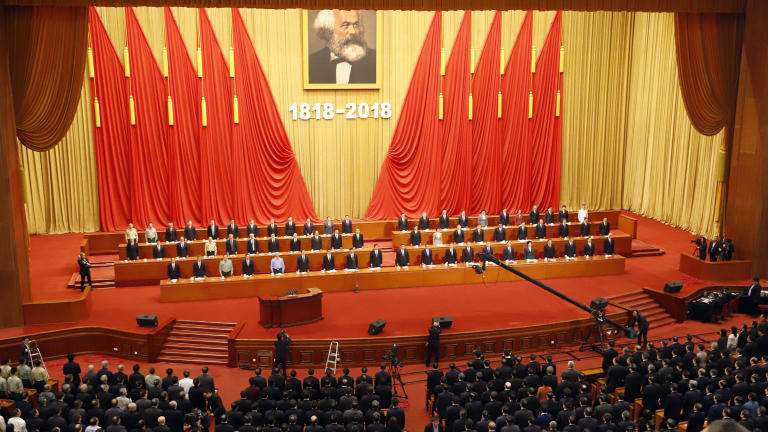 Participants stand as The Internationale is played in the Great Hall of the People to mark 200 years since the birth of Karl Marx.

Chinese President Xi Jinping gave a major speech on how Marxism still drove China onwards, while across town, his top economic advisor, Vice Premier Liu He, upheld the principals of globalisation and free trade in talks with the American group.

The Marx anniversary speech, which was televised nationally, highlights that Xi is pushing the ruling Communist Party and its philosophy into the centre of Chinese life – on university campuses, in business and in government.

That this could occur at the same time as economic reform and opening up was explained by Xi as Marxism adapting to the times.

Among a small busload of foreign media invited to hear Xi speak, Fairfax Media struck up a conversation with a North Korean journalist. He strode smiling up the staircase in the Great Hall of the People, wearing the standard North Korean grey summer suit (worn without a shirt underneath) and obligatory Kim Jong-il and Kim Il-sung lapel badge.

It is rare for a North Korean reporter to be seen, let alone speak with western media. Marx's anniversary would be big in Pyongyang, he said.

What was left unsaid was that China and South Korea have very likely offered North Korea a path for economic reform, out of old-school socialist planned economies, in exchange for nuclear dismantlement.

Marxism had changed China, said Xi, and scientific socialism was "by no means an immutable dogma".

"The great social changes in contemporary China are not … a simple application of the template envisaged by a classical Marxist writer, nor a republication of the practice of socialism in other countries, nor a reprint of the modernisation of foreign countries," he said. 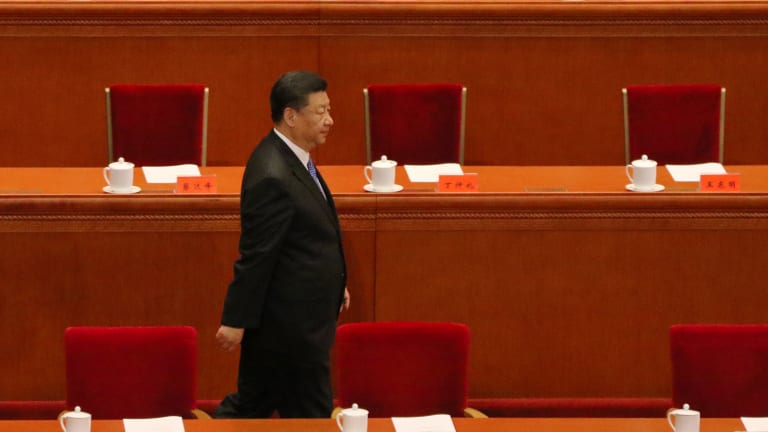 Xi Jinping arrives at the podium to speak of the relevance of Marxism in modern China.

Marx was even invoked as a champion of globalisation. Xi gave an apparent dig at the Trump trade delegation across town.

"Countries are more connected and interdependent to each other than ever before. An integrated world is there. Whoever rejects the world, the world will reject them," said Xi.

Xi said the world had undergone earth-shaking changes since the Communist Manifesto was published 170 years ago, but its general principles were "entirely correct".

The speech reinforced that China has no intention of following western democratic reforms.

China faced "unprecedented heavy tasks of reform" and challenges and risks in governance, Xi said, but it had to use Marxism to solve its problems.

The US trade delegation included such heavyweights as US Treasury Secretary Steven Mnuchin, US trade representative and architect of the $US100 billion ($133 billion) in looming punitive tariffs against China. Also present were Robert Lighthizer, Death by China author Peter Navarro, American TV commentator Larry Kudlow and Commerce Secretary Wilbur Ross.

The delegation arrived on Thursday and Mnuchin spoke only briefly to media on Friday morning.

“We are having very good conversations,” was all he said as he left his hotel.

Chinese media published commentary that the Chinese side was unwilling to meet Trump's demands to immediately cut $US100 billion from the $US375 billion trade surplus, nor gut its key 'Made in China 2025' advanced manufacturing program, which supports Chinese high-tech brands.

No immediate breakthroughs were expected to be achieved during the two days of meetings.