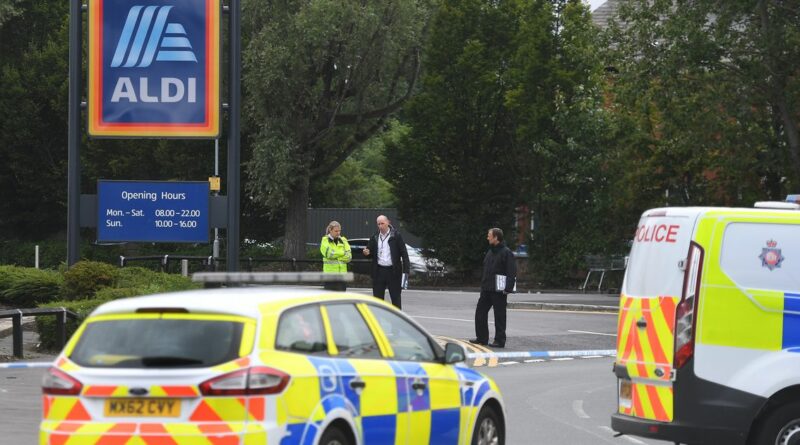 A 50-person fight in an Aldi car park may have kicked off over a man asking for a girl's phone number, it has been claimed.

One woman in her 30s was rushed to hospital following the mass brawl, with serious injuries believed to have been caused by a vehicle.

Police were called to the chaos in Gorton, Manchester at around 4am on Sunday where some thugs were reportedly armed with weapons.

Paramedics were already treating a woman when officers arrived at the supermarket.

According to nearby residents, screams echoed from the car park well before the scuffle broke out, Manchester Evening News reports.

The owner of a restaurant opposite Aldi, claims he was told that a man hitting on someone's girlfriend sparked off the violence.

An event was held at Roots restaurant and bar opposite the scene which was due to finish at around 2.30am.

The owner, who would only give his name as Sid, said the venue was closed by the time trouble kicked off and he only learned of it after he had left and gone home.

"Nothing happened in the restaurant," he said.

"Everyone was gone. I think it was people that came from somewhere else, from another venue, and they thought we were open late.

"I got a call when I was at home. I spoke to someone who was there – most of our customers are regulars and he didn't know any of the faces. I think they came to do a street party or something."

"They told me it started because of some guy asking for a phone number from somebody's girlfriend.

Sid says he had not spoken to police but said he is happy to co-operate with their investigation if required.

"We are curious to find out what really went on, if it was connected to us but I don't think it was," he said.

"We've never had something like this, we've been open ten years."

Councillor Julie Reid said she wants a "full investigation" into the circumstances surrounding the incident.

"This is ridiculous – we don't need it in Gorton," she said.

"The majority are decent people. Why would this happen on a remote car park on Hyde Road?

"A lot of people heard screaming, punches and saw people with weapons, clearly it was a big fight."

The police cordon remained in place on Garratt Way for much of Sunday with officers pictured laying down evidence markers on the pavement.

One resident who overlooks the car park told how he was trying to get to sleep and was woken by loud noises.

He said: "I heard shouting and screaming. I just thought it was normal things but then the screaming didn’t stop.

"I saw a lot of people in the parking lot screaming at each other."

He said he heard a bang and a woman screaming.

A GMP spokesperson said: "Police were called at 4am this morning (Sunday 15 August) to a report of a large fight involving nearly 50 people on a car park off Garratt Way, Manchester.

"On officers' arrival, the group dispersed and a woman in her 30s was being treated in an ambulance – it is believed a vehicle had collided with her and she suffered serious but not life-threatening injuries.

"No arrests have been made and enquiries are ongoing.