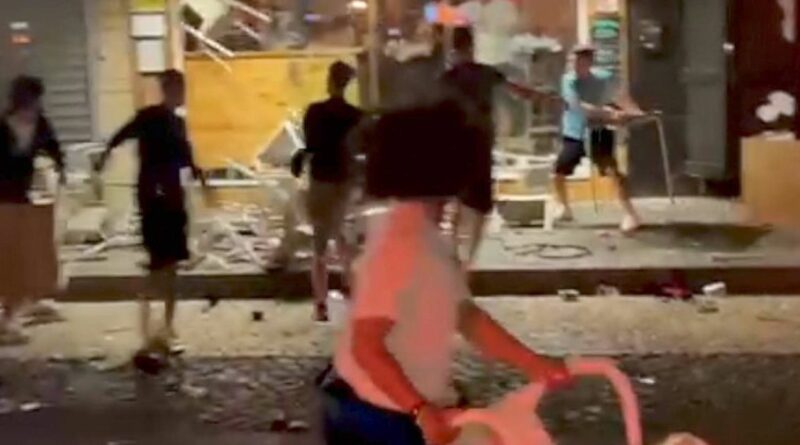 An unruly mob of 20 Brits threw tables and chairs around during a mass brawl outside a Portuguese bar.

The riot kicked off at the Aloha bar in the Algarve coastal resort of Portimao, with scared staff taking cover to try and avoid getting hurt amid the mayhem.

Amazingly, nobody was seriously injured during the June 20 fracas, although several individuals involved were said to have required medical assistance.

Seven British youngsters were subsequently identified by police, with some having criminal backgrounds, according to officers.

During a video of the violent melee, a staff member is seen shielding himself from flying chairs with a table.

Shocked onlookers can also be heard shouting "what the f***" and "oh my God".

Local reports stated that a fight started between two different groups, before the gang of Brits then turned against bar manager Ricardo Teixeria and a security guard when they attempted to split the scrap up.

After around a minute, the group then ran off.

Teixeria said: "At around 1am two groups clashed. According to the authorities some of foreign nationality, namely Irish and English, were involved.

"All our employees and security are well and there was no damage to the establishment. It is unusual to have this kind of problem. Portimao is a calm city and we don't normally have these issues with foreigners or locals."

A Portimao Council spokesperson, meanwhile, told media outlet Portugal Resident that the local authority is planning to install 32 CCTV cameras to try and reduce violent crime incidents in the city.

Police are also planning to position a permanent rapid response unit in the area with the intention of preventing similar scenes in the future.

The coastal spot used to be a sleepy fishing port until the 1980s when tourists discovered its charms, leading to the addition of glitzy hotels and a main street rammed with bars and restaurants.