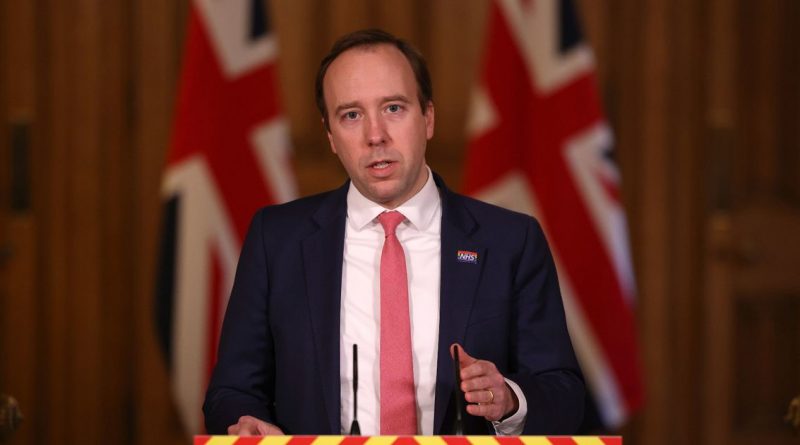 Matt Hancock will address the House of Commons today after it emerged under-50s will face a delay in receiving Covid vaccines.

The number of doses arriving in the country is due to fall in April after a shipment issue, NHS facilities were told in a letter earlier this week.

Addressed to local health leaders in England, it asked vaccination centres and community pharmacy-led services to close unfilled bookings and "ensure no further appointments are uploaded" to booking systems in April.

This week, Brits in their 50s were invited to get their first jab.

However, the under-50s may now have to wait several more weeks before they are called up.

Five million doses of the Oxford University/AstraZeneva vaccine were due to arrive at the end of March but the shipment has been delayed by four weeks.

In a press conference on Wednesday, March 17, the Health Secretary played down the disruption.

He said: “Supply is always lumpy and we are on course to deliver the offer that everybody who is aged 50 and above will be able to get vaccinated by the 15th of April. I recommit to that today.”

The warning was made in a letter first reported by the Health Service Journal.

It read: "The Government's Vaccines Task Force have now notified us there will be a significant reduction in weekly supply available from manufacturers beginning in week commencing 29 March, meaning volumes for first doses will be significantly constrained."

"They now currently predict this will continue for a four-week period, as a result of reductions in national inbound vaccines supply.”

An expert has since warned that reduced supplies could slow the easing of lockdown restrictions.

Dr Simon Clarke, associate professor in Cellular Microbiology at the University of Reading, said while it was not yet known why the delay had occurred, the "ripple effects could last for months".

He said: “It will undoubtedly make the meeting of the target dates for lifting restrictions more difficult than they otherwise would have been.

"By pushing back the under-50s first doses, their second doses are also being pushed back.

"If full vaccination becomes required for holidays abroad or even more mundane things like going to the cinema, millions of younger people may end up being excluded from participating for the whole summer."

Meanwhile, the UK faces a possible block on doses from the EU after European Commission president Ursula von der Leyen warned the bloc "will reflect on whether exports to countries who have higher vaccination rates than us are still proportionate".

She said she wanted "reciprocity and proportionality" in exports, pointing out that 10 million doses of vaccine had gone from the EU to the UK.