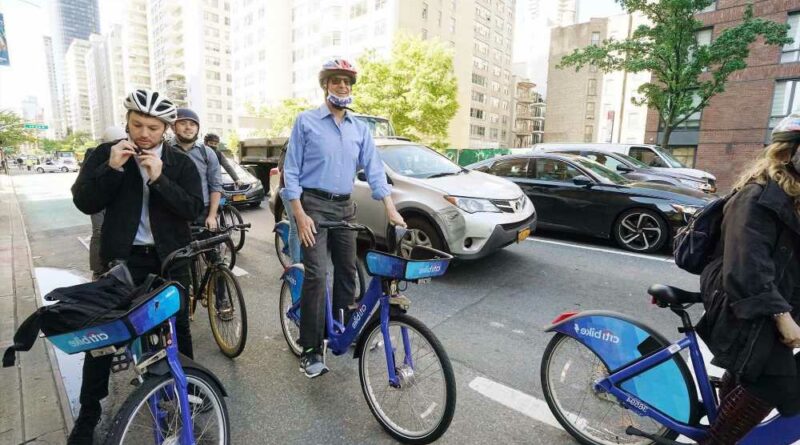 Italian-Americans to rally against canceling Columbus Day in NYC schools

Mayor Bill de Blasio hopped on a Citi Bike for a leisurely hourlong ride through the heart of Manhattan on Tuesday to tout National Bike Month — except no one from the public seemed to notice.

Hizzoner — wearing a blue button-down shirt and gray suit pants along with a red-and-blue “Vision Zero’’ helmet  — only received mild attention when reporters pointed out to passers-by who the cyclist with them was.

Even when de Blasio arrived at City Hall, a guy walking by the mayor and his group of about 20 to 25 reporters and staffers near a Citi Bike rack asked, “Is that the governor?’’

The last time the mayor publicly rode a Citi Bike was in August 2018, to promote the introduction of pedal-assisted models in the city.

He didn’t use the motorized version Tuesday — telling a reporter, “It doesn’t work for me, man. If you’re gonna do it, do it, be authentic.’’

Hizzoner began his more than six-mile trek at 8 a.m. from his mayoral home at Gracie Mansion on the Upper East Side and traveled mainly down Second Avenue with his media and staff entourage, along with a plainclothes NYPD security cop who was also on two wheels.

The ride took about an hour and 20 minutes, with only an uphill Midtown stretch appearing to tax the 60-year-old mayor.

Hizzoner was jovial and chatty with the press riding with him — and calmly maneuvered around a large black-and-red plumbing, heating and electrical truck blocking the bike lane in Lower Manhattan.

The mayor told a reporter he doesn’t commute to work on a bike regularly because he can’t talk on his phone at the same time.

After arriving at City Hall, de Blasio told reporters, “That area around the bridge needs work,’’ referring to the Ed Koch Queensboro span at 59th street, which is usually a gridlocked mess.

He later crowed at a 10 a.m. press conference, “I am feeling invigorated.

“There’s nothing like a good bike ride in the morning,’’ the mayor said.

“It’s National Bike Month, and I celebrated by getting on a Citi Bike this morning,’’ he said, adding the ride was “just beautiful another way of seeing the city coming back to life.’’

Hizzoner announced at the briefing that the city is expanding its bike lines by about 30 miles and will be giving away a free two-week Citi Bike membership to people who get their coronavirus vaccines.