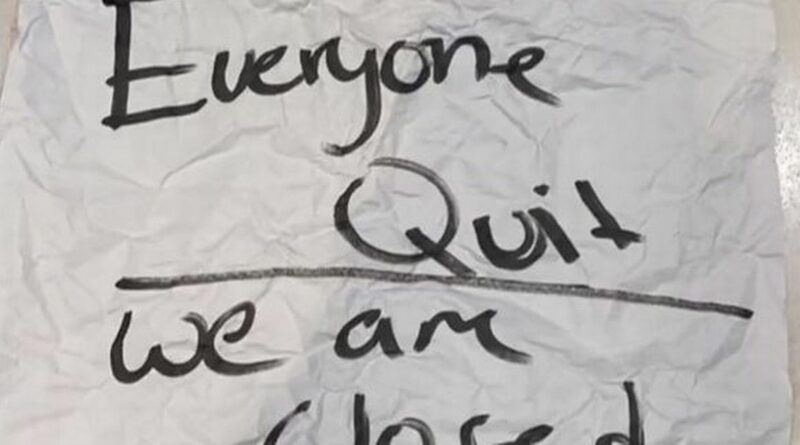 A McDonald's was forced to close after all its workers appeared to quit midway through the shift after reportedly arguing with the managers.

A viral TikTok, which has racked up more than 2.3million views already, showed an unstaffed restaurant with a note explaining the lack of staff.

The hand-written note at the California McDonald's simply said "Everyone quit, we're closed".

The eerie video showed the empty kitchen with no customers waiting and no orders on the screen ready to be collected.

TikTok user @zoey.isback captioned the video: "Well that happened today and it was so funny" alongside a crying face and laughing face emoji.

After it was suggested that the whole team quit because of a row over pay, she explained that wasn't the case.

"The store was ran by teenagers and it was a terrible workspace. The higher-ups had trouble helping us when needed."

She continued: "It's a bad job to start with but that's where most teenagers start for experience so that's where I put myself."

Another video posted later gave more detail into the story, as Zoey complained about her bosses.

She captioned the post: "Story time? Here's a little more, I barely recorded that day that's why. But idk why y'all are so interested on what happened."

With the video reaching millions of people in a matter of days, many viewers who have worked in the service industry, particularly in the pandemic, offered their support in the comments.

One wrote: "Worker solidarity here! I'm glad everyone quit. That tells me more about how terrible the workplace is than the employees. Good for y'all".

"I think anyone whose worked service is collectively agreeing, good for you guys," added another.

A third asked: "Can this become a trend in toxic work environments? This is great…. lol".