McDonald's (MCD) is bringing back its fan-favorite Szechuan Sauce.

Beginning on March 31, and for "only a few days," the sauce will be available for free with any Chicken McNuggets order at U.S. locations. There's a catch though, the dipping sauce will only be sold via the McDonald's app.

This is the sauce's fourth return to the Golden Arches since its debut 24 years ago as a promotional tie-in to Disney's animated movie "Mulan." The sauce made a cult-fan comeback 20 years later, in 2017, after being referenced on the hit animated science-fiction series "Rick and Morty," leading the show's followers to create a petition to bring the dipping sauce back.

Later that year, McDonald's sent the creators of "Rick and Morty" a four-pound bottle of the sauce, hinting that a limited batch would be available in the near future. But its Oct. 7 release backfired. Fans drove hours only to find out locations didn't have the sauce. At some spots, customers took to Twitter to share videos of angry customers chanting, "We want sauce!" 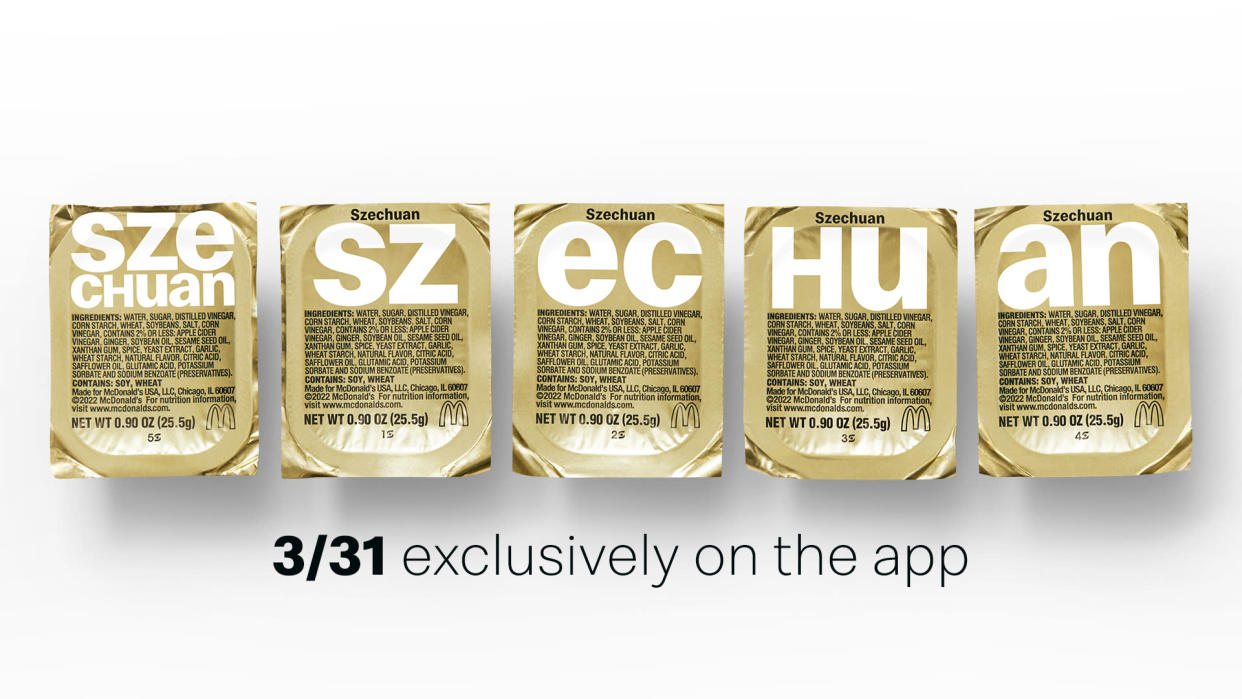 There's currently a resale market for the sauce on eBay (EBAY), with prices ranging from $1 per packet to $850 dollars for 100 packets.

The newest rendition of the sauce packets features five different designs, which together spell “Szechuan.”

In the company's fourth quarter and full-year 2021 results, the app-driven MyMcDonald’s Rewards program helped to drive digital sales of over $18 billion in 2021, or over 25% of total sales in McDonald's top six markets.

Year-to-date, shares of the Golden Arches are down nearly 11% but compared to a year ago, shares are up more than 7%.

Brooke DiPalma is a producer and reporter for Yahoo Finance. Follow her on Twitter at @BrookeDiPalma or email her at [email protected]