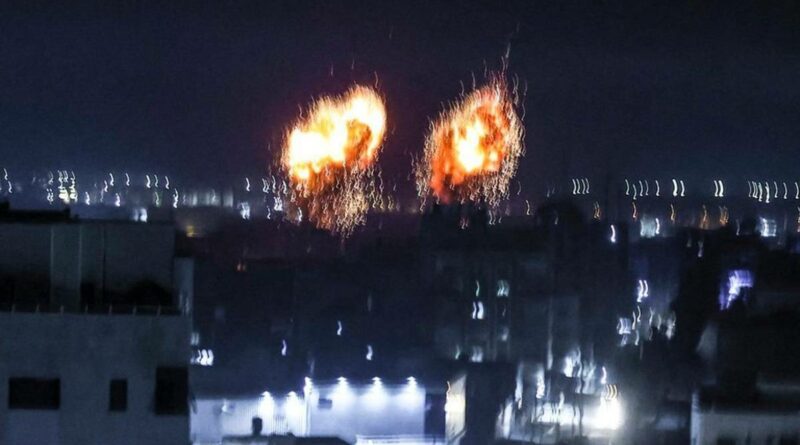 Foreign diplomats worked to calm tensions after the first armed exchange between Hamas and Israel since an 11-day air war in May.

International mediators stepped up efforts Wednesday to broker a longer-term truce between Israel and Hamas, the militant group that dominates the Gaza Strip, after the first armed exchange between the two sides since the end of an 11-day air war in May.

Egyptian and United Nations diplomats were mediating between both sides, two diplomats involved in the talks said. The effort followed a day of escalating tensions on Tuesday after the new Israeli government permitted far-right Jews to march through Palestinian neighbourhoods in Jerusalem. In response, militants in Gaza sent several incendiary balloons into Israel, causing 26 fires, and Israeli aircraft fired missiles at several military posts in Gaza in the early hours of Wednesday morning. No casualties were reported.

The escalation was the first major test for the fragile new Israeli government that on Sunday replaced Benjamin Netanyahu, the country’s longest-serving leader, after winning a confidence measure in Parliament by just one vote. Its first major decision was to allow the provocative far-right parade, a decision that angered Arab and left-wing members of the coalition.

Mediators received indications from both Israel and Hamas that neither was seeking to increase conflict further, one diplomat said Wednesday. An Egyptian task force was on the ground in Gaza on Wednesday morning, clearing rubble from the war in May and trying to prepare the ground for a longer-term reconstruction effort.

But the Hamas leadership publicly did not rule out further attacks on Israel. Moussa Abu Marzouk, a senior member of Hamas’ political wing, based in Qatar, said by phone that the decision would be made by the group’s military leadership.

“The issue of responding to the bombardment is on the table, but this decision is with the resistance,” Abu Marzouk said, referring to the group’s armed wing.

A deeper truce remained even more elusive, with Israel, Hamas, the Palestinian leadership in the occupied West Bank and international donors yet to agree on a mechanism to deliver aid, money and reconstruction materials to rebuild Gaza following the war in May.

“The UN is in contact with all relevant parties on matters related to the cessation of hostilities,” said Tor Wennesland, the United Nations special coordinator for the Middle East peace process. “This has been going on for a while and will continue with the view of having some arrangements put in place that could stabilise the situation. This is still a work in progress with more to be done.”

The war in May killed more than 250 Palestinians and 13 Israeli residents, according to the United Nations. In Israel, Palestinian rockets wrecked several apartments, cars and buses, damaged a gas pipeline and briefly shut down two major airports. In Gaza, Israeli strikes damaged homes, clinics, hospitals and schools, as well as power lines, sewage works and three major desalination plants, the United Nations said.

But while diplomats say some reconstruction material has begun to enter Gaza through Egypt, Israel has limited what can arrive through its crossing points to core humanitarian materials, such as medicine, fuel and food, pending a longer-term agreement. It has also blocked the supply of financial aid from Qatar; before the war, the Gulf country sent about US$30 million every month to help stabilise Gaza’s economy.

Israel and Hamas disagree on whether to include a prisoner swap as part of any stronger cease-fire deal. Israel wants Hamas to return two missing Israelis who are believed to be captive in Gaza and the remains of two Israeli soldiers also thought to be there. Hamas seeks the release of Palestinian prisoners inside Israeli jails.

The process is also complicated by a desire for the Palestinian Authority — which exerts limited autonomy in parts of the occupied West Bank, and which Hamas forced from Gaza in 2007 — to play a role in coordinating any future aid.

Israel and Egypt control what comes in and out of Gaza as well as most of its electricity and fuel. Israel has the biggest say, since the main supply routes to Gaza are routed through Israeli ports. It also controls Gaza’s birth registry, airspace and access to the sea and cellular data, and it restricts Palestinian access to farmland at the strip’s perimeter.