Seeing double…? Welcome to the ‘Island of Mirrors’ where 100 pairs of twins live in a tiny tropical enclave in the Philippines in ONE-IN-THREE families

This is the tiny tropical Filipino island which has become famous for the 100 pairs of twins dominating the sparse population.

Schools, homes and families on the island of Alabat are overrun with identical and non-identical siblings.

The latest miracle babies are Gian and John, who are pictured happily sharing their hammock-cot.

But as the four-month-old youngsters will find out, looking just like your brother or sister is far from out of the ordinary where they live.

According to local legend the growing number of twins on the Alabat began generations ago.

Now there are 78 pairs of non-identical twins and 22 pairs of identical twins – including one pair of conjoined twins. Many of siblings continue to dress the same as each other into adulthood. 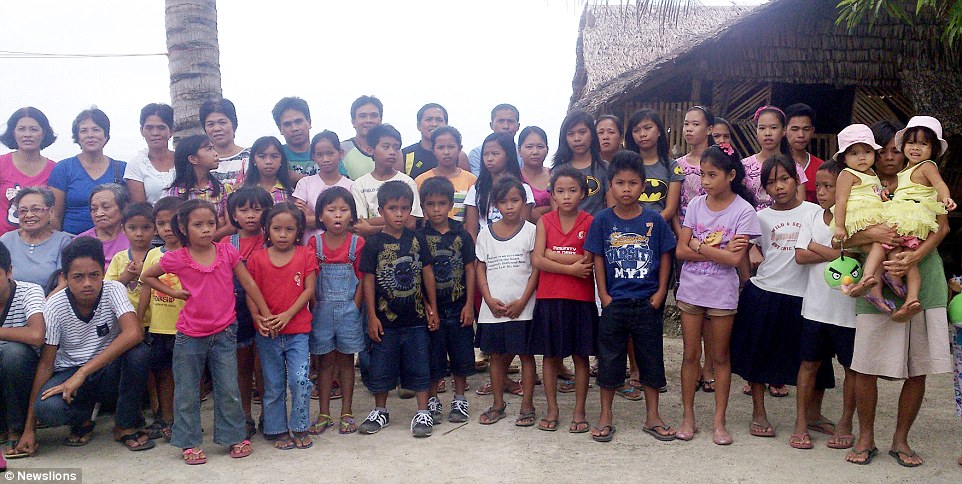 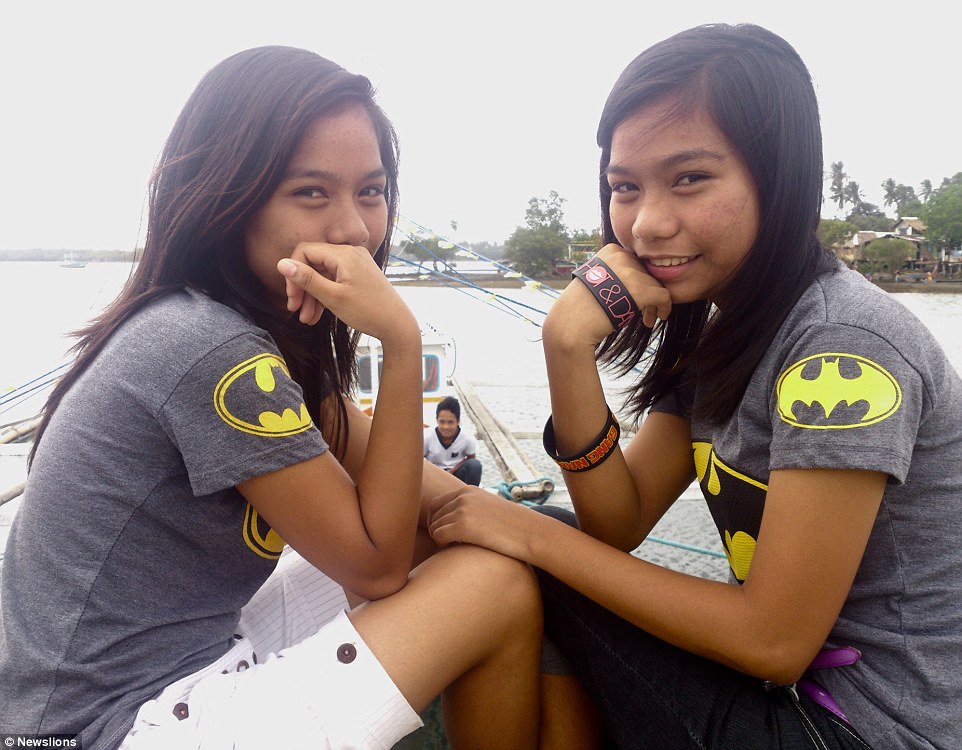 Schools, homes and families on the island of Alabat are overrun with identical siblings like sisters Dalisay and Dalna 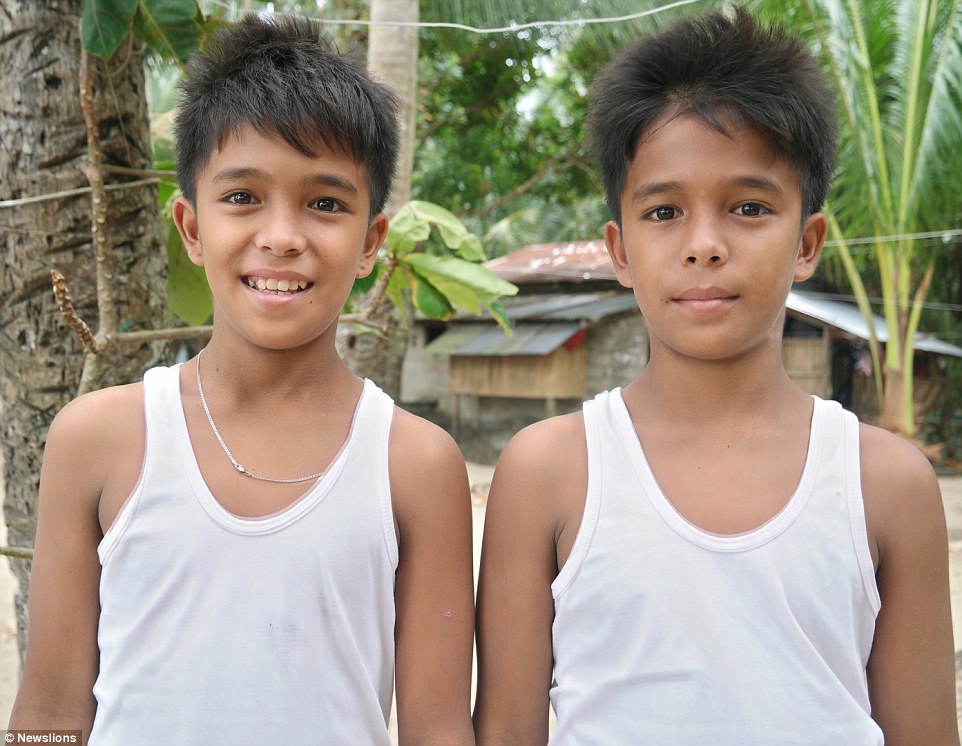 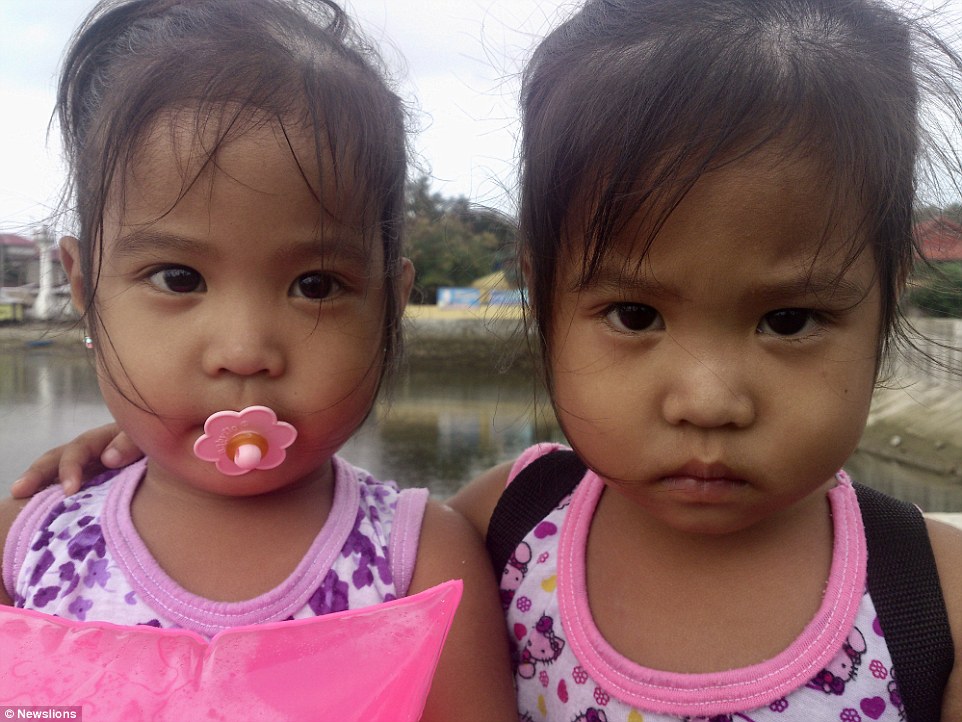 Twins Jane Nicole (with dummy) and Jennie Nicole (wearing hello kitty tshirt) are always dressed in different sets of clothes by their mother Nesa Lim, mother of the to avoid them from envying each other 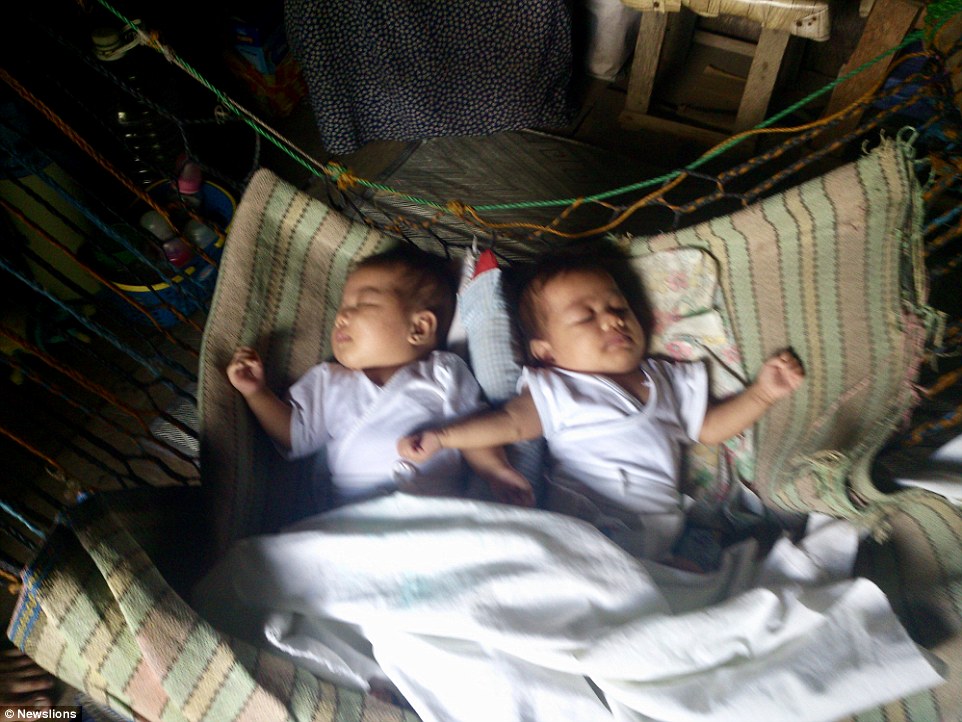 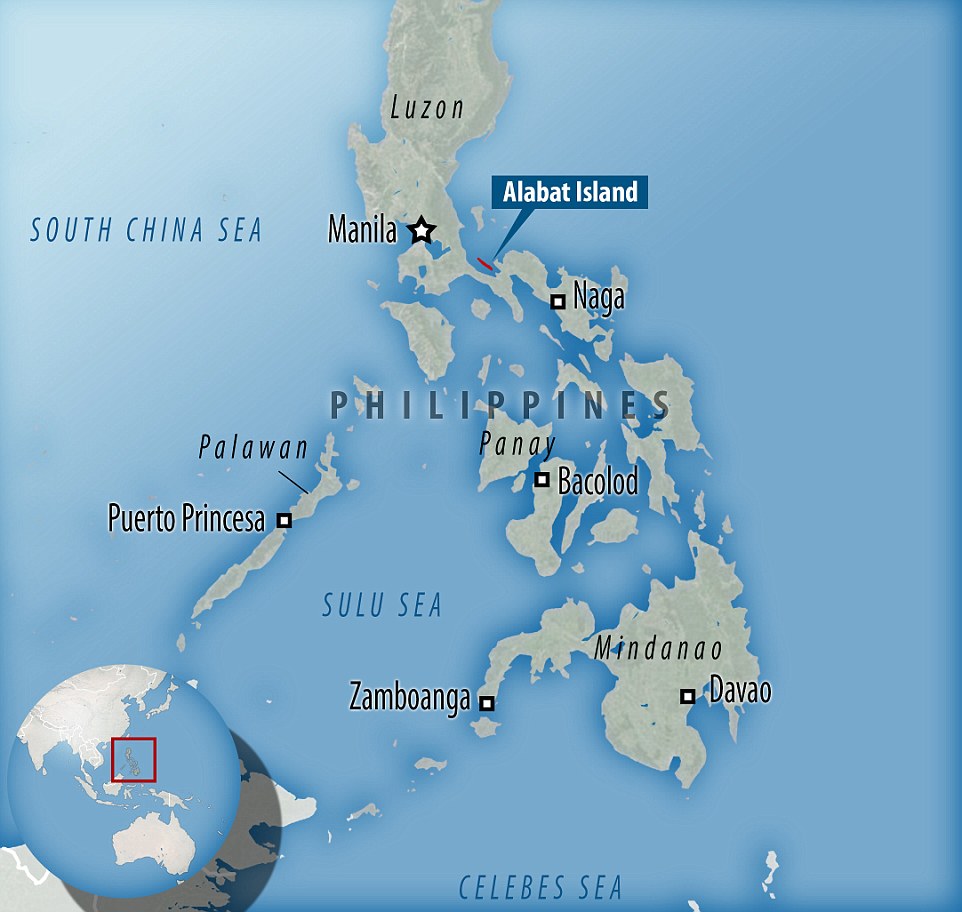 The oldest surviving pair are 86-year-old grandmothers Eudosia and Antonia Meras, who are now both widows.

Antonia, who got married when she was just 19, recounted how her husband quickly learned to tell the identical twins apart.

‘In the initial days my husband would often mistake Eudosia for me,’ she revealed. There were some embarrassing moments when my husband made amorous overtures to my sister thinking that it was me.

‘I then showed him that I have a mole on my nose while my sister does not have one. That solved the problem once and for all.’

Her sister Eudosia revealed she does have a mole, but it is on her lips – which she claims makes her chatty.

‘See, I have a mole on my lower lip that’s why I am very talkative,’ she said. In our lifetime, we notice that there are twins like us all over the island.

‘Most of us wear identical clothes and people have problems identifying who is who,’ she added. 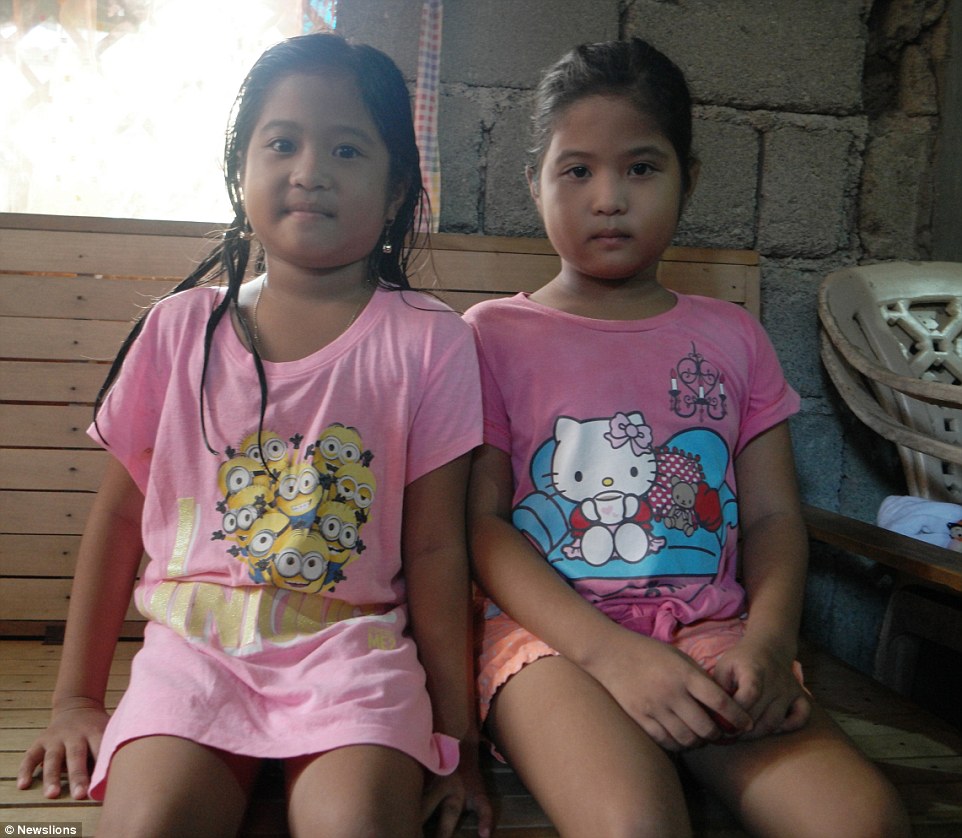 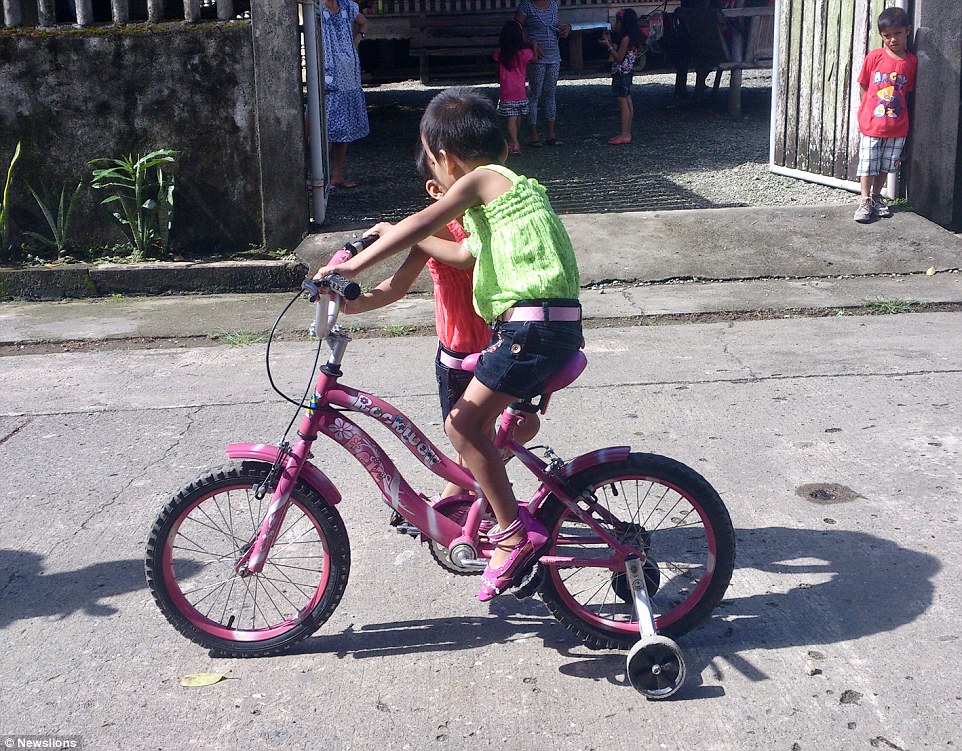 Conjoined twins Joy and Joyce Magsino (pictured riding a bike) were born attached at the forehead. Their grandmother’s Sonia and Cynthia were also twins. The girls, now 11, hope to undergo surgery to be separated

The grandmothers are now the last in a growing line of twins.

Antonia’s 21-year-old granddaughter Stella Amargo is a third-generation twin. But unlike the grandmothers, who are looking forward to reaching 100 together, she does not get on with her sibling.

‘My sister is not here, we have our own lives now,’ Stella said. I can tell you that it’s not easy growing up with a twin sister or brother.

‘Twins tend to be envious of the attention, love, care and attention given to their sibling. It’s always the case – one is the favourite and the other is not.

‘You might deceive the others, but parents can easily differentiate between us, just by observing our behaviour, even when we try to impersonate each other.’

She added: ‘Aside from our twin grandmother, my grandfather on my father’s side are twins. And I also have twin relatives. And across the street live neighbours who are fraternal twins.’

The neighbours they are talking about are eight-year-old Jane Carla and John Carlo. Their mother Virginia Belo has twin brothers and her mother is also a twin.

The island’s youngest twins – Gain and John – are in safe hands.

Although the infants’ parents are not themselves twins, their mother Gaylee Diomela’s has an aunt and an uncle who are  – and the babies’ paternal grandparents are both twins. 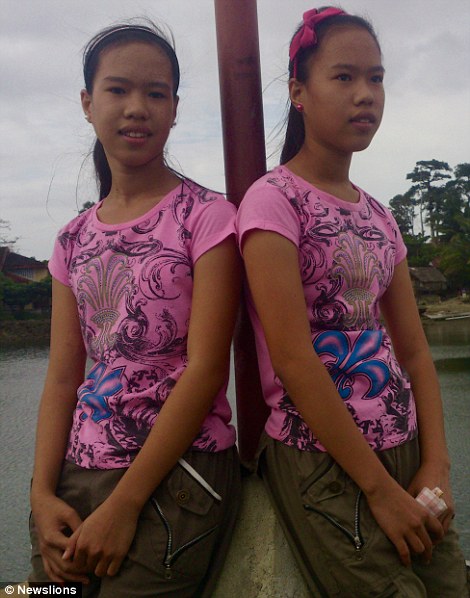 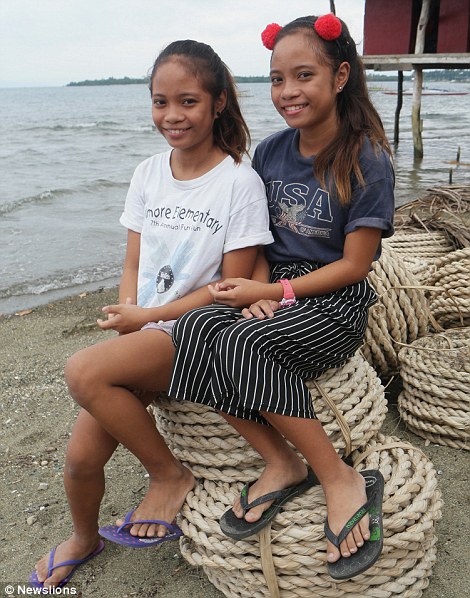 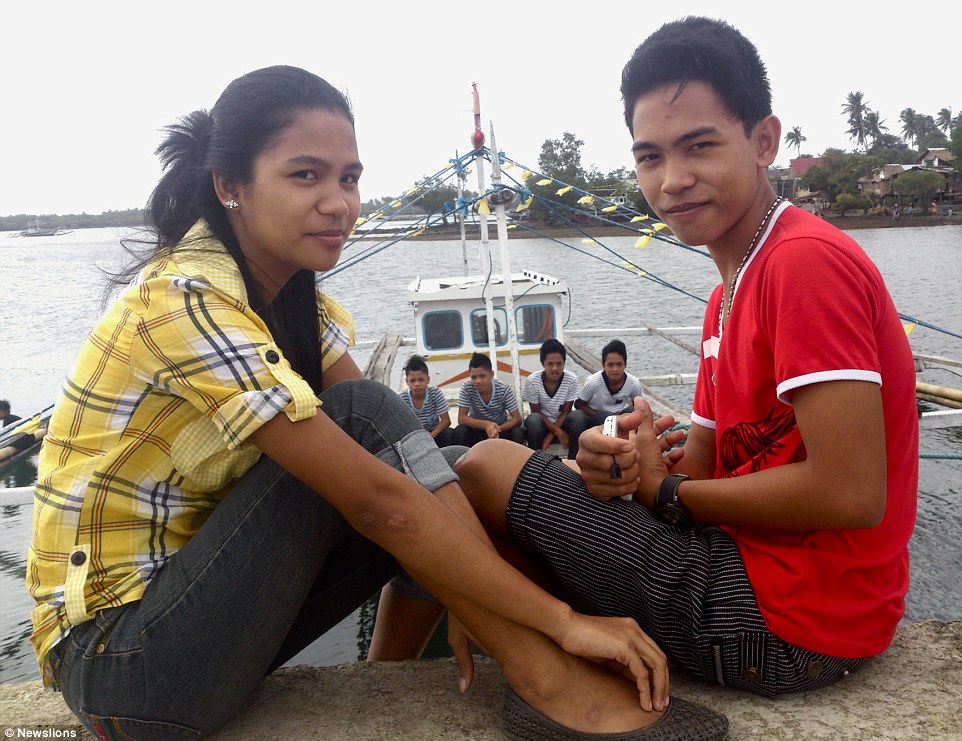 Most teenage twins spent their weekends in Atimonan town, an hour away by boat from Alabat Island, but return home for school 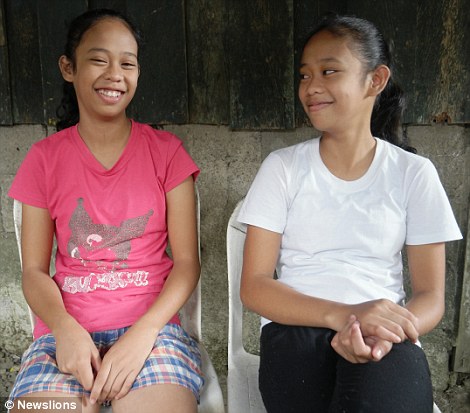 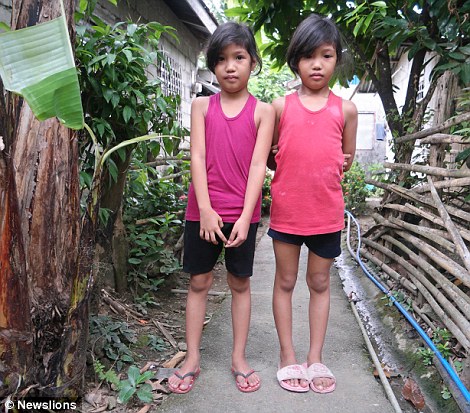 Imelda Saberdo, 52, believes the myth that when she was pregnant she was fond of eating twin bananas and that’s why her youngest Isabelle Saberdo (violet t-shirt) and Alexa Saberdo (red t-shirt) were twins

Not all of the twins look alike. Ronalyn and Romalyn, 38, are different have different heights and body sizes.

Other differ widely in temperament. Rolando Consulta, 45, is nothing like his twin brother, his wife Purita Consulta claims.

She said: ‘My husband has a twin brother and they look almost identical. He and his brother wear the same clothes but I can easily tell them apart. My husband is talkative and short-tempered while his brother Roberto is quiet and easy-going.’

Conjoined twins Joy and Joyce Magsino were born attached at the forehead. Their grandmother’s Sonia and Cynthia were also twins. The girls, now 11, hope to undergo surgery to be separated.

‘Identical twins are a miracle of nature,’ Nikki Roberts, of the Twin and Multiple Births Association, told MailOnline.

‘Only one per cent of births are twins. And of these just a third are identical.

Non-identical twins are created when a woman produces two eggs at the same time and both are fertilized, each by a different sperm.

‘Identical twins occur when a single egg is fertilized and split into two creating babies with the same genes, physical features and sex.

‘Conjoined twins occur when the egg splits very late on after it is fertilized.’