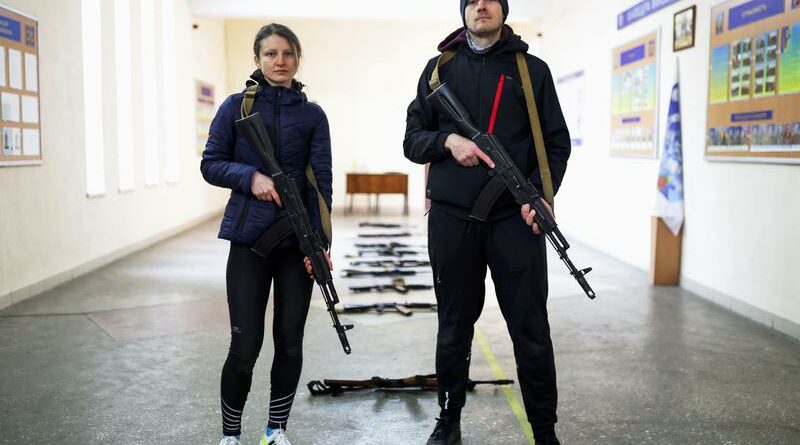 ODESSA, Ukraine (Reuters) – A generation of Ukrainians who knew of war only from history books and the stories of their grandparents has been forced to prepare to fight, and some are choosing to do it with the partners they were building their lives with only weeks ago.

In a training centre in the southern city of Odessa, young urban professionals who might normally be choosing where to meet friends for a coffee learn about handling weapons and applying emergency first aid to battlefield wounds.

“Every person should know how to fight, how to make medicine, aid for your relatives or other people,” said 26-year-old graphic designer Olga Moroz, training in civil defence alongside her boyfriend, 32-year-old sales manager Maxim Yavtushenko.

The couple, who had been planning their wedding in the summer, were at the dimly lit facility that provides basic training for 80 to 150 people a day, all seeking to have some kind of preparation for the day that Russian troops pressing closer to the city finally arrive.

Odessa, a picturesque Black Sea port that handles more than half of Ukraine’s imports and exports, is seen as a major strategic and symbolic target for Russian forces. Russia invaded the country on Feb. 24 in what the Kremlin describes as a “special military operation”.

Three weeks later, the capital Kyiv and key cities like Odessa are still unconquered, with Russian troops facing strong resistance from Ukrainian forces and defiant opposition from the civilian population. But some cities, such as the city of Mariupol east of Odessa, have faced days of bombardment.

The reality of war has come as a shock to residents of Odessa, a vibrant city where design ateliers and coffee outlets specializing in single bean roasts mix with historic architecture and the looming cranes and rail yards of the port.

“To be honest it’s really hard for us to understand that right now is a war,” said 26-year-old internet marketing agency employee, Murager Sharipov. “Now people are dying somewhere, people are dying and these are our people,” he said.

Although the civil defence training offered in the centre is basic, Yavtushenko said it had helped prepare mentally for what might come.

“Ukraine is right now alone and people who right now are watching it need to understand the war is here, but it can be in your home, it may be with your friends and in your country.”