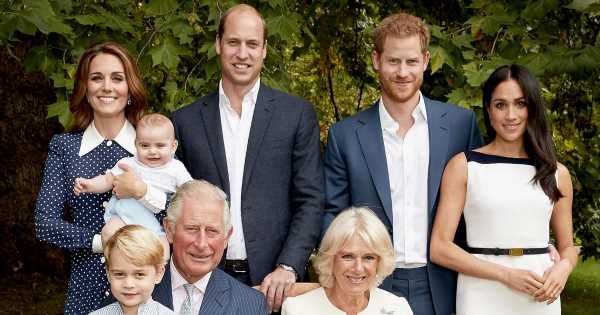 Meghan Markle and Prince Harry will be snubbed from joining Prince Charles and Camilla at the balcony on Buckingham Palace after his coronation, a royal insider has claimed.

A source said that a "slimmed-down monarchy" will be present at the coronation and believes the Sussexes won't be joining the key part of the ceremony.

Only Prince William, Kate and their three children are likely to join Charles and Camilla when he ascends the throne, the source told the Mail on Sunday.

They said the Prince of Wales wishes for his coronation to be "far cheaper" than the Queen's ceremony in 1953, which cost £1.57million – the equivalent of £46million today. It was suggested that the list of guests will be as few as a quarter of the number invited in 1953 – and there will be far fewer members of the royal family itself.

A source said: "It will be a slimmed-down Monarchy on display throughout.

"I wouldn't be surprised to see just Charles and Camilla, Kate and William and their children on the Buckingham Palace balcony afterwards."

Prince Charles and Camilla will be crowned side by side in the scaled-back coronation ceremony, it is claimed.

It comes after the Queen revealed it is her “sincere wish” that Camilla will be known as the Queen Consort when he son takes to the throne.

The last time a Queen Consort was crowned was in 1937 when the Queen's mother, Elizabeth, sat alongside King George VI.

A source said that plans for Charles and Camilla’s coronation, which is due to happen within a year of his accession, are being discussed as part of Operation Golden Orb.

The ceremony will be “shorter, sooner, smaller, less expensive and more representative of different community groups and faiths".

The source also said some aspects of the coronation will be altered to “reflect modern day Britain”, but it will remain an Anglican service with the vows not expected to change.

The number of guests will be limited to 2,000 and fewer members of the royal family will be in attendance.

The Queen, who turns 96 in April, became the first British monarch to celebrate a Platinum Jubilee this month, marking 70 years of service.

She was crowned on June 2 in 1953 at Westminster Abbey, following the death of her father King George VI the previous year. Around 27 million people watched the ceremony on TV and 11 million listened on the radio.

Earlier this month, she praised Camilla's "loyal service" and said she wants her daughter-in-law to become Queen Consort "in the fullness of time".

The Queen also said that when Camilla and Charles are crowned, she expects people across the country to offer "the same support that you have given me".