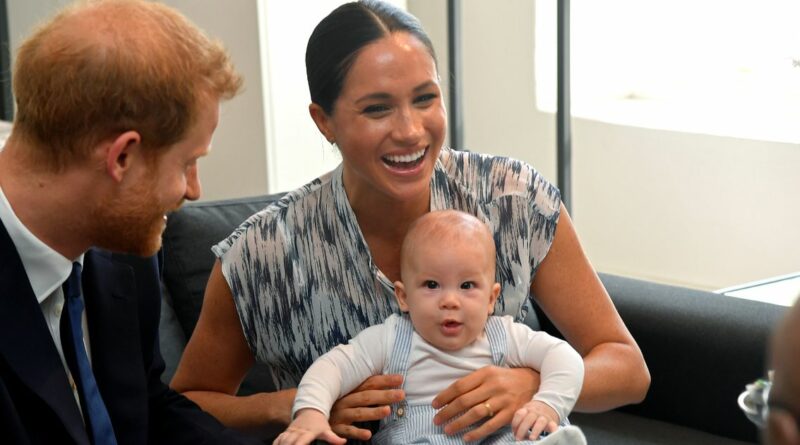 Prince Harry and Meghan Markle rejected the title offered to Archie out of fear of playground 'mockery', a royal biographer says.

According to Andrew Morton, having 'dumb' in their eldest son's honorary title was enough to put the Duke and Duchess of Sussex off it.

Archie Harrison Mountbatten-Windsor could have grown up as the Earl of Dumbarton, but his parents are alleged to have feared it would attract teasing at school.

The couple's decision, Mr Morton says, reflects how sensitive they are about their family's image.

In line with royal tradition, Archie was entitled to take on the subsidiary style of his father’s official title.

When they tied the knot, the Queen made Prince Harry and Meghan the Duke and Duchess of Sussex, the Earl and Countess of Dumbarton and the Baron and Baroness Kilkeel.

Rather than have any link to stupidity, Archie would inherit a 17th-century title that relates to the Scottish area of West Dunbartonshire.

Mr Morton who has re-released his book Meghan and the Unmasking of the Monarchy: A Hollywood Princess, told Us Weekly: "[Archie] could have taken the title [of] the Earl of Dumbarton, which is an honorary title, but [Harry and Meghan] decided against that because they felt that the word 'dumb' in the word 'Dumbarton' would have been used as mockery when Archie went to school."

The biographer, 68, added: "And again, it shows you their sensitivity to image. Which is something, you know, somebody was saying to me [that] the other day that they contacted team Sussex and the first question [the Sussexes] asked was 'What pictures are you using?' And that person thought, 'That’s everything you need to know about the Sussexes.'"

Harry and Meghan have instead left the door open to Archie to choose whether he wants to embrace an honorary title when he is older.

When Archie was born on May 6, 2019, at the Portland Hospital to Prince Harry and Meghan, we could scarcely imagine the events that would ensue.

At the time of his birth, it was revealed that he would be officially known as Master Archie Harrison Mountbatten-Windsor, rather than Prince Archie of Sussex.

The reason for this comes down to Letters Patent by King George V in 1917 where he wrote that all the children of the sovereign, the male-line grandchildren and the eldest son were all allowed to hold a princely title.

It was previously suggested that when Prince Charles sits on the throne, Archie and his younger sister Lilibet would become a Prince and a Princess but Charles’s desire for a slimmed-down Royal Family now makes that unlikely.