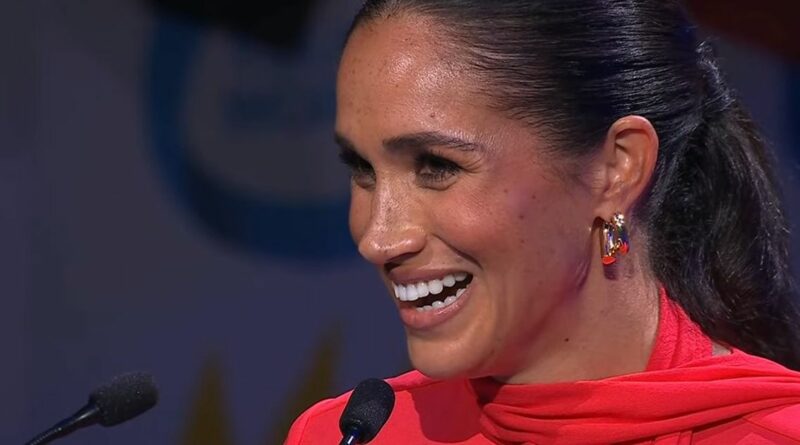 Meghan Markle had an "authentic smile" on her face when she spoke about how "nice" it was to be back in the UK at the One Young World summit.

The event saw the Duchess of Sussex make her first public speech in the UK since leaving the Royal Family back in 2020.

As soon as they set foot on UK soil, they were spotted taking a train from London Euston to Manchester to attend the opening ceremony of the organisation which Meghan has been a Counsellor since 2014.

Once there, the former Suits actress, who was wearing a striking red blouse and matching trousers, gave a speech about how much her life has changed and said it was nice to be back in the country.

And she kicked things off by saying it was "very nice to be back in the UK".

While tension around the pair seems to skyrocket whenever they touch down on British soil, body language expert Judi James claims that Meghan's smile was genuine when she spoke about her happy return.

Speaking to the Daily Star, Judi said: "It was Meghan raising her hands high to clap the UK flags during the ceremony and it was Meghan telling her audience with an authentic smile how nice it was to be back in the UK."

Judi also claimed that Meghan gave a "dramatic" speech about how her life has changed from being an actress on Suits to being a mum and wife.

"With several references to Archewell and her podcast from the host, Meghan took us through her small history as a counsellor," she added.

"Fluttering her eyelashes shyly as she described herself as just a ‘girl from Suits’, having to save her place card to prove she belonged there to a much more knowing smile and dramatic pause as she referenced her marriage and being a ‘Mom’.

"Her small elbow pump to her body and the puckered smile as she spoke of ‘how my life had changed’ was dramatic and followed by a long blink of gratitude.

"She threw a coy smile and loving giggle at Harry, who looked down and performed a tongue-poke.

"She made it clear this is still very much all about their love story and the audience responded with applause."