Windsor: "It's going to be great fun," said the virger of St George's chapel moments before guests started arriving for the royal wedding.

Another attendant nearby commented, "Wish us luck!"

The scent of roses filled the air inside the chapel as guests waited patiently outside. Orders of service were placed precisely in the centre of the chairs. 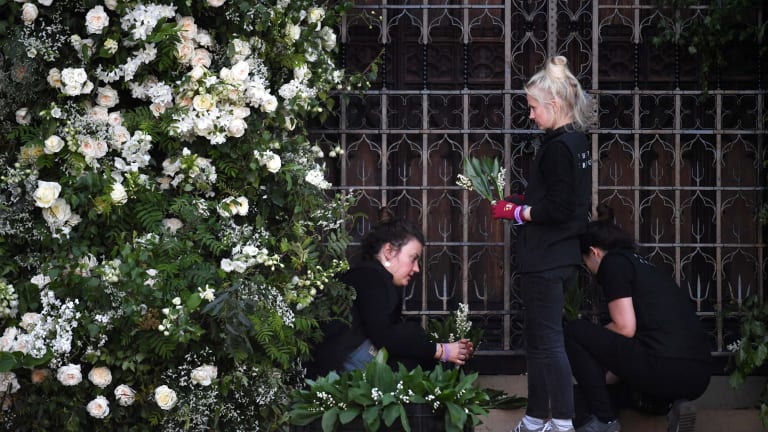 Flower arrangers do last-minute preparations within Windsor Castle ahead of the royal wedding ceremony of Britain’s Prince Harry and Meghan Markle.

An anxious church attendant walks past. "We are missing about 10 orders of service. We need them right now," he tells the virger – the woman responsible for the order and upkeep of this particular chapel, who insists on the traditional spelling of her title, better known as "verger".

On the chapel altar, a set of golden plates, which are pulled out for special occasions gleams in the dim light. The virger said, "We don't polish them very often because we don't want to rub them down too much."

Guests inside the chapel were divided into two areas. The nave and the quire for very, very important people (VVIPs). Those include the bride and groom's families, of course, but also celebrity guests including George and Amal Clooney, Oprah Winfrey and Serena Williams.

St George’s Chapel was commissioned by King Edward IV in 1475 and is considered a masterpiece of the late Gothic style.

But it was more than half a century before it was finished under King Henry VIII, who (probably not personally) added the vaulting over the organ in 1528.

As was the style at the time, the quire (choir) at the east end is separated from the main body of the church (the nave) at the west end. 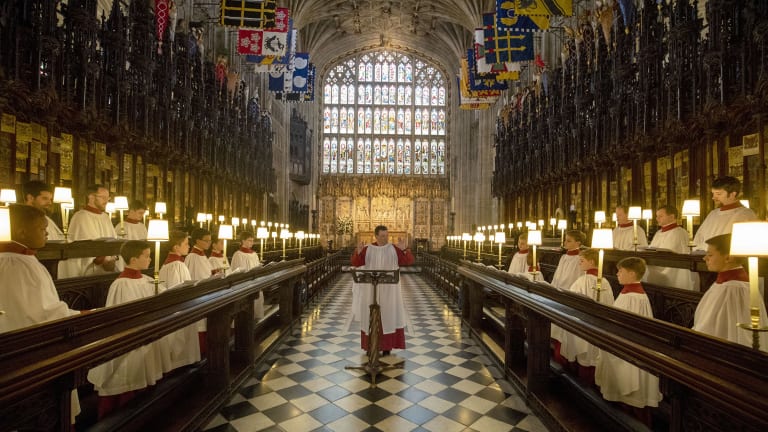 The St. George’s Chapel Choir rehearses ahead of the royal wedding.

For the wedding service of Harry and Meghan, most of the guests were in the nave. Though they would not have had a good view of the action (each row got its own discrete TV screen), they were able to feast their eyes on some beautiful late 15th century stained glass windows picturing “princely knights”, saints and bishops.

In the corner of the room is the stone font – though not the same one used to baptise Harry in 1984.

The quire is stunning, with intricately carved wooden stalls commemorating the members of the Order of the Garter.

The chapel is that ancient order’s spiritual home, and though there can be only 26 members at a time there have been 1000 members over the years – Prince William took it into quadruple figures in 2008. 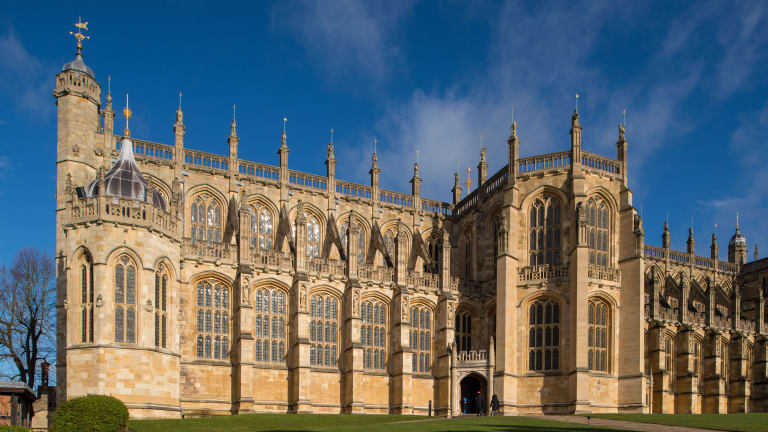 Above the seats are the banners and helms of the living members of the order.

There are also some pretty famous bodies around the chapel: literally. King George V and Queen Mary’s tomb is in the north-west corner of the nave, and King George VI and Queen Elizabeth (and the ashes of the Princess Margaret) also lie here. In all there are ten British sovereigns under these old stones.

Fun fact: the Chapel is technically a “Royal Peculiar”, because it is ouside any diocese or arch-diocese authority.