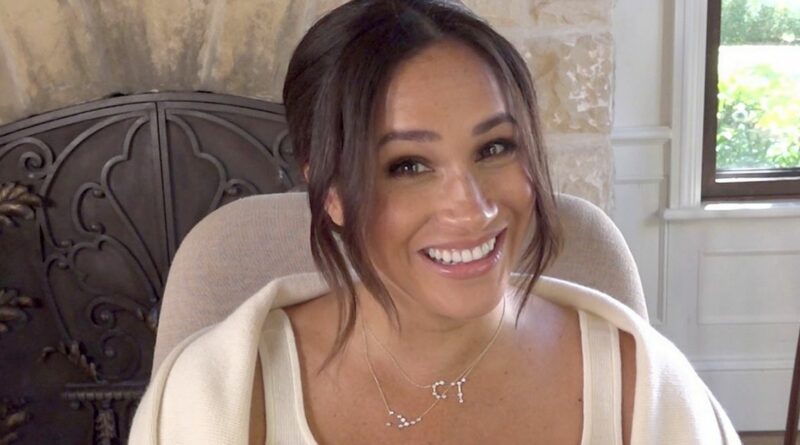 A royal biographer and self-styled royal expert has accused Meghan Markle and Melissa McCarthy of "mocking the Queen" in the duchess's 40th birthday video.

Angela Levin was commenting on the viral release of Markle's 40th bday "publicity stunt" to support 40×40, a new campaign for gender equality after COVID.

Hollywood comedienne McCarthy appeared in the light-hearted clip, joking about the pair getting matching tattoos and why Meghan hasn't agreed to a Suits reunion.

But McCarthy is said by some to have made fun of the Queen by dressing up in a garish green outfit, fancy hat included.

She joked it was in order to "fit in" with the vibe of Meghan's video – and seemed pretty self-aware – but Levin was having none of it.

She tweeted furiously: "Anyone else think that Meghan and her friend Melissa McCartney were mocking the Queen in the birthday video?

"Both holding old fashioned cup and saucer like Meg used in her blog after 1st meeting with queen.

"Melissa sipping from the cup wearing fancy hat and gloves?"

In a follow-up tweet, Angela revealed what she was really thinking.

"The mockery shows what she thinks of the Royal Family", she added.

"She's got what she wanted and is confident she can outsmart us all.

"We just have to wait for Harry's outpouring in his memoir."

The comedic video was intended to celebrate 40×40, a new campaign urging mentors to provide 40 mins of their time to help jobless women pushed out of work by the COVID pandemic.

In a statement published on Archewell's website yesterday Meghan said she had asked 40 friends to mentor a needy pal.

The duchess wrote: "I believe mentorship is one way to help women regain confidence and rebuild their economic strength.

"For my birthday, I have asked 40 friends, activists, athletes, artists, and world leaders to help kickoff a global effort by contributing 40 MINUTES OF MENTORSHIP to support women re-entering the workforce."

Linking to UN research which showed women are likelier to be economically hit by the pandemic, Meghan said she hoped to make a "meaningful impact" with the new campaign.