Meghan Markle and her agent ‘arranged’ for paparazzi shots of her to be taken as she entered a London restaurant, just one year before she met Prince Harry, sources said.

A photographer snapped pictures of the then lesser-known Suits actress heading into Toto’s restaurant in Kensington in March 2015 – in a shoot allegedly organised via her agent at the time.

She was snapped walking into the Italian restaurant wearing a stylish black ensemble with a white sleeveless trench coat.

Inside, the actress – who played paralegal Rachel Zane on Suits – was interviewed by The Mail On Sunday’s You Magazine as part of a weekly feature showcasing up-and-coming talent.

Meghan Markle and her agent ‘arranged’ for paparazzi shots of her to be taken as she entered a London restaurant, just one year before she met Prince Harry, sources said 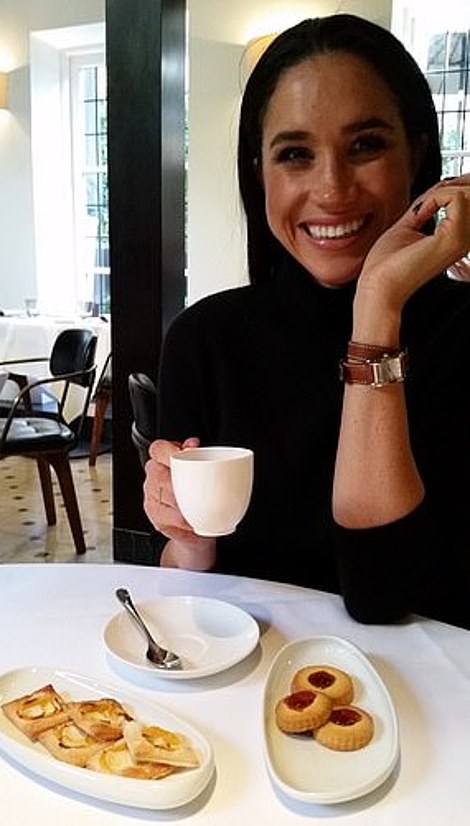 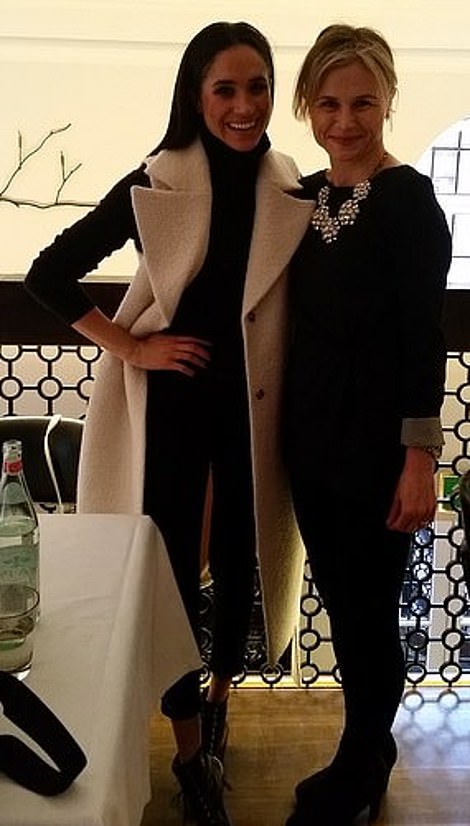 Inside, the actress – who played paralegal Rachel Zane on Suits – was interviewed by The Mail On Sunday’s You Magazine (pictured inside and with the journalist who interviewed her) 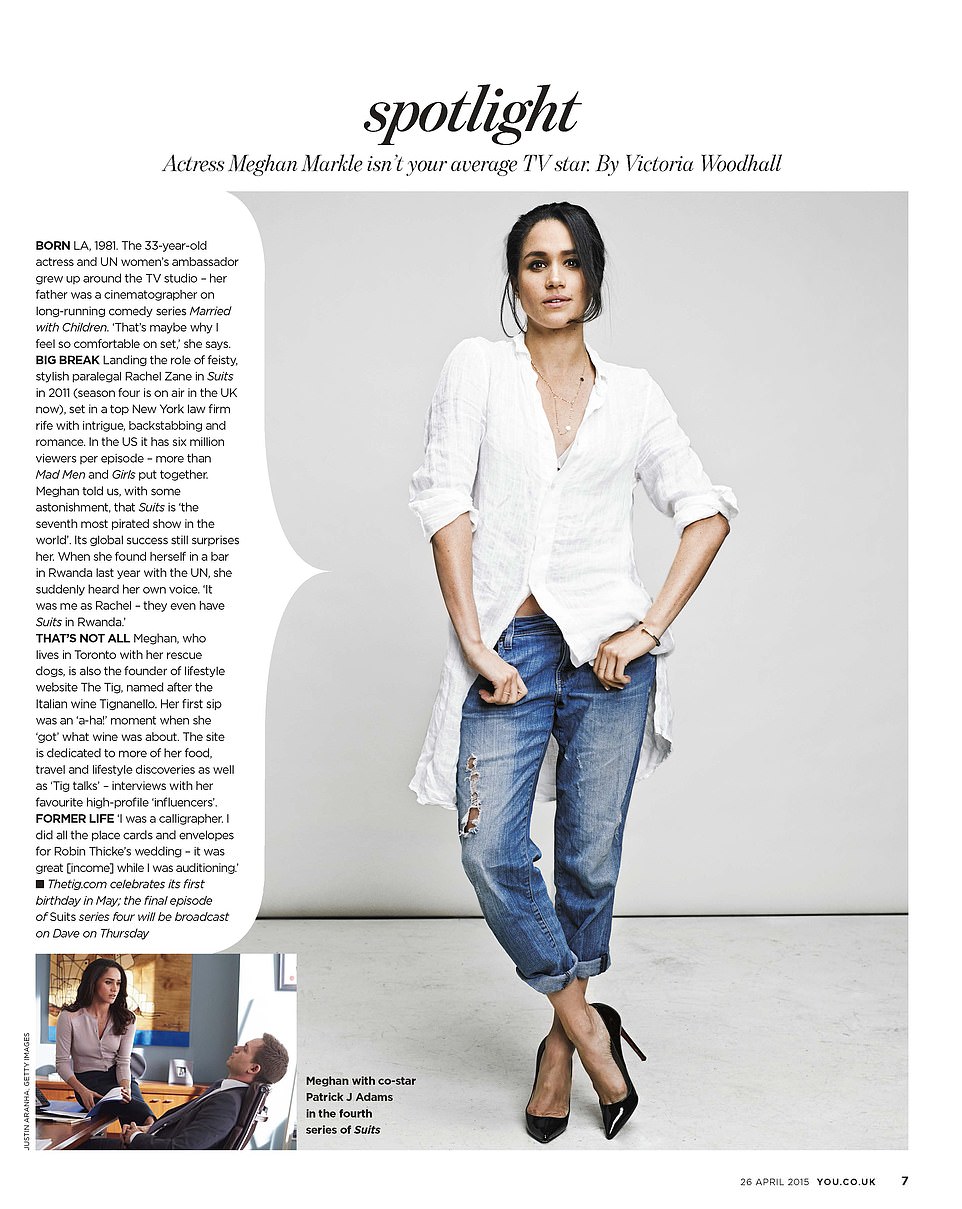 Inside, the actress – who played paralegal Rachel Zane on Suits – was interviewed with The Mail On Sunday’s You Magazine (pictured) as part of weekly feature showcasing up-and-coming talent

A source told The Sun: ‘Meghan knew the photographer was going to be at the Kensington restaurant to take her photos of her arrival. It was all pre-arranged.’

They added: ‘For someone who wasn’t very well known in the UK at that point, she certainly didn’t question why a photographer would randomly turn up to take her picture.’

Meghan’s former agent Gina Nelthorpe-Cowne denied that a photo shoot was ever pre-arranged by the company Kruger Cowne.

Earlier this week, bombshell biography Finding Freedom revealed that Meghan set up a paparazzi pictures while she was working as an actress and before dating Prince Harry.

The Suits star allegedly told photographers where she would be so they could get pictures and ‘let info slip out to the press’, the bombshell biography claims.

Meghan Markle heads to afternoon yoga in Toronto, Canada, in December 2016 (left). Her relationship with Prince Harry (together right in 2017) became public in October that year. There is no suggestion that paparazzi were set up for these pictures

Recalling the moment the couple’s relationship became public in October 2016 while they were in Toronto, it claims they were ‘tipped off’ that a tabloid was planning to run the story.

There is no suggestion that Meghan was involved in the pair’s relationship becoming public.

‘It was no longer just the two of them. While Meghan, before she met Harry, had occasionally set up a paparazzi photo here and there or let info slip out to the press, she did everything in her power to protect the privacy of her relationship with the prince.

‘She knew keeping things quiet meant they could get to know each other without pressure or further worries that came from reporters covering their romance.’ 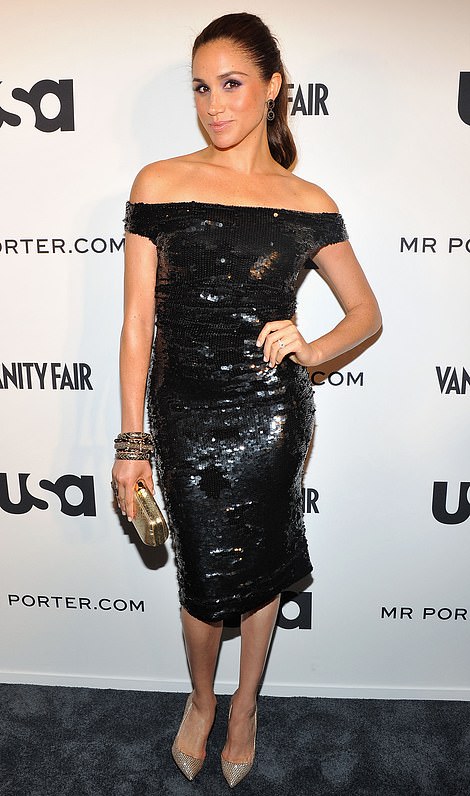 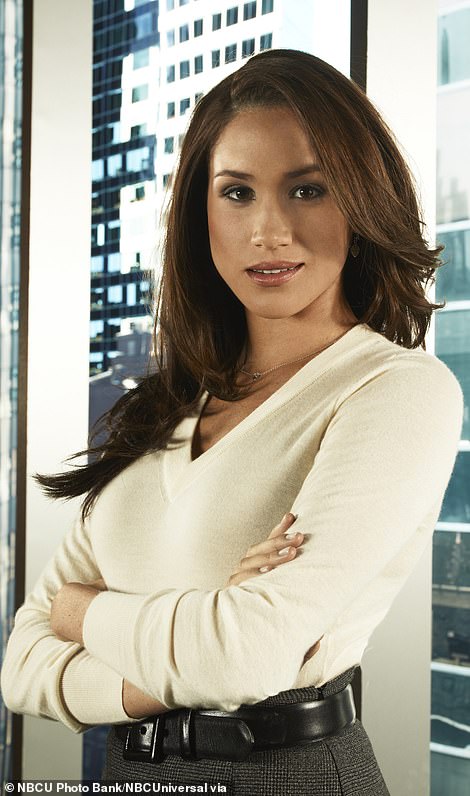 Actress Meghan is photographed at a glamorous event on June 12, 2012 in New York (left). She was in TV show Suits (right) at the time

But it added there was ‘also a part of her that was relieved’.

The claims about Meghan’s previous relationship with the media come amid questions over the Duke and Duchess of Sussex’s involvement with the book.

The couple have denied they sat down with authors Omid Scobie and Carolyn Durand to be interviewed for the biography – serialised in The Times and Sunday Times – that lays bare their battle with the royals.

But its pages contain intimate anecdotes which would only be known by those closest to them. In one excerpt, the authors tell how the night before her wedding, Meghan was ‘sitting in a bath…FaceTiming with a friend’.

Another section describes the ‘perfect [yoga] pose’ she stretched her body into after discussing marriage with Harry while on holiday in Africa.

It also reveals texts between the couple and the details of the meal eaten by the prince and the Queen when they met at Windsor for a final heart-to-heart.

In another extract, a source close to the couple defends the fast pace of their relationship, saying: ‘Their love was real and their feelings for each other were genuine. Everything else was noise.’ The comment echoes Meghan’s own words from an interview in Vanity Fair in 2017 when she discussed the impact of her relationship with Harry.

‘The people who are close to me anchor me in knowing who I am. The rest is noise,’ she said.

Some commentators have drawn comparisons to Andrew Morton’s biography of Diana, the late Princess of Wales.

The book was criticised on publication but it later emerged that Diana was the source.

The Queen’s former press secretary Dickie Arbiter told the Mail: ‘I think it has their fingerprints all over it.

We had a similar scenario in 1992 when Diana swore blind she hadn’t helped Andrew Morton and yet a year later it came out that she had indirectly helped him so history is repeating itself.

‘There are too many things that we have seen in the serialisation that could only come from the horse’s mouth, like deciding to gatecrash Sandringram when they landed from Canada.