MEGHAN Markle stunned in clothes from her own Smart Set range today as she headed to the beach with Prince Harry – but with no sign of baby Archie.

The Duchess of Sussex beamed as she arrived with her husband on the second day of their royal tour in Africa to visit Waves for Change – a charity that works with surfers to provide mental health support for youngsters. 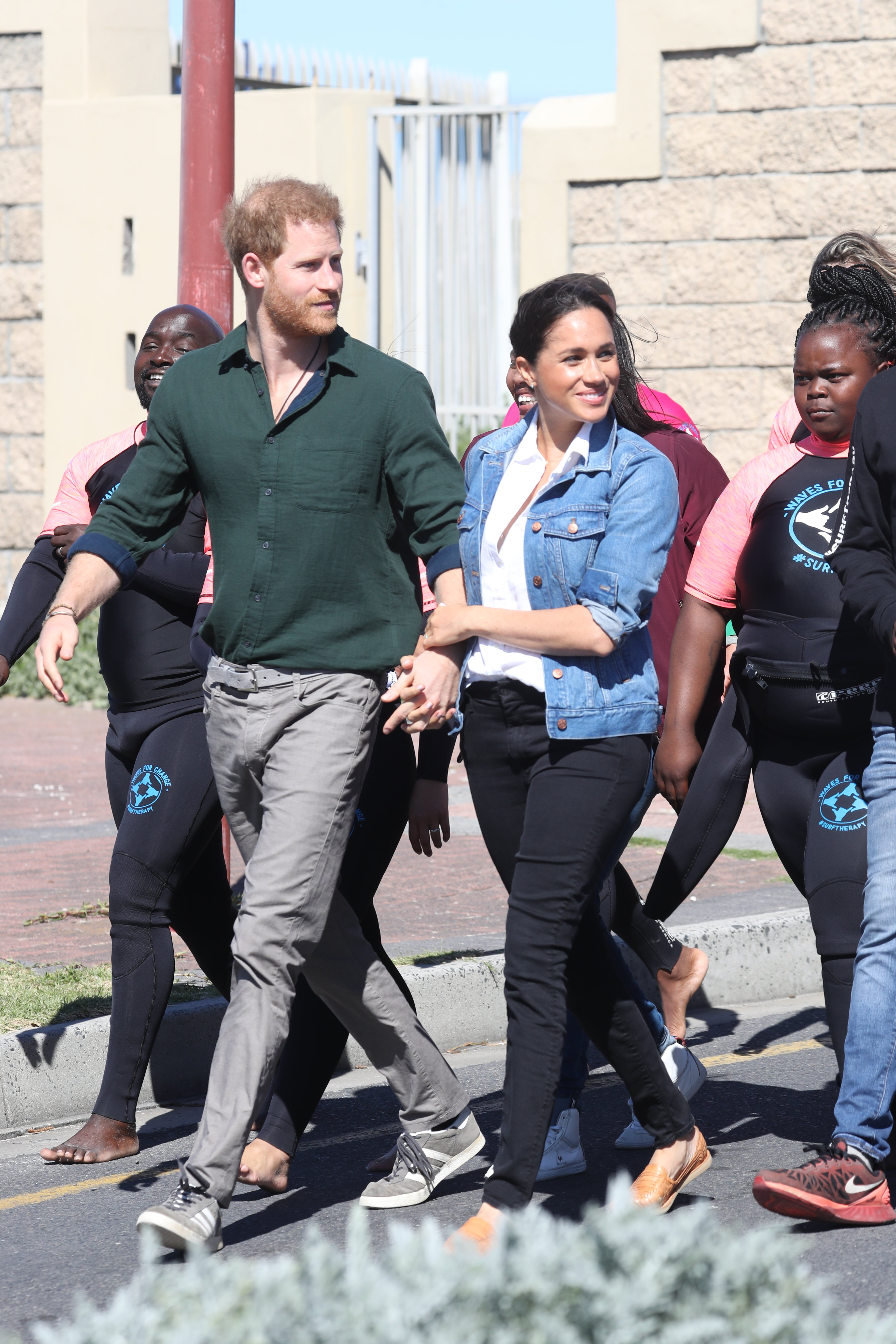 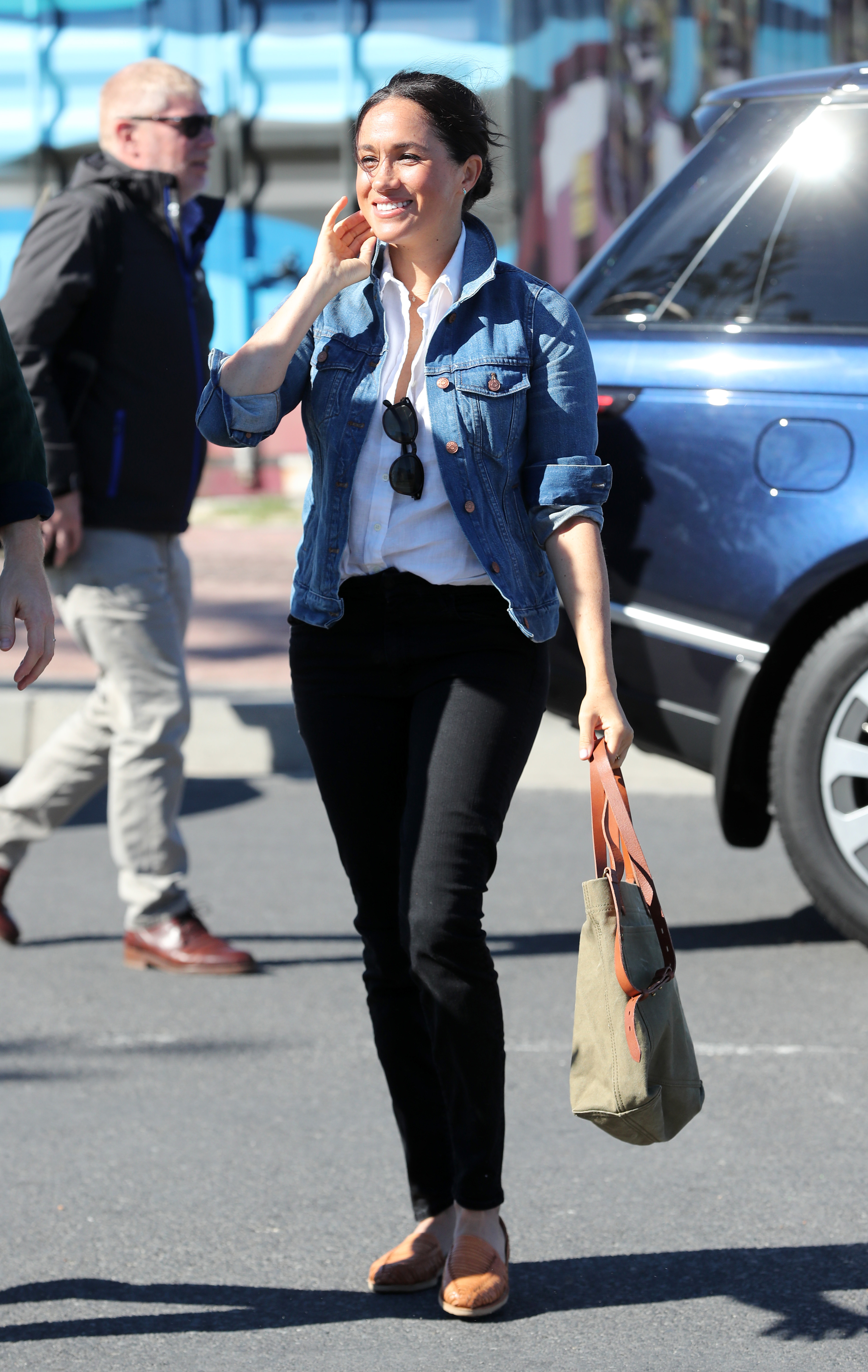 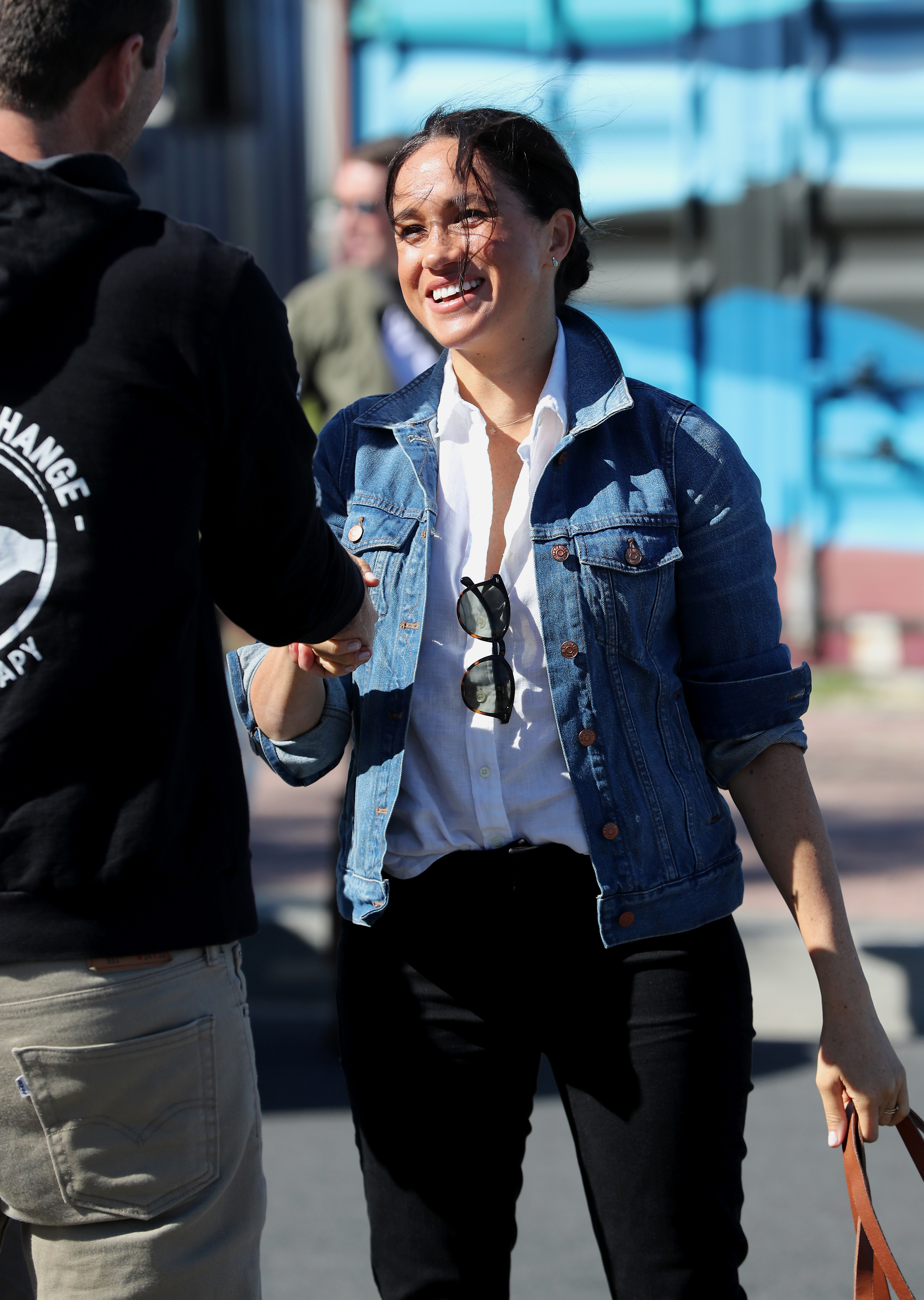 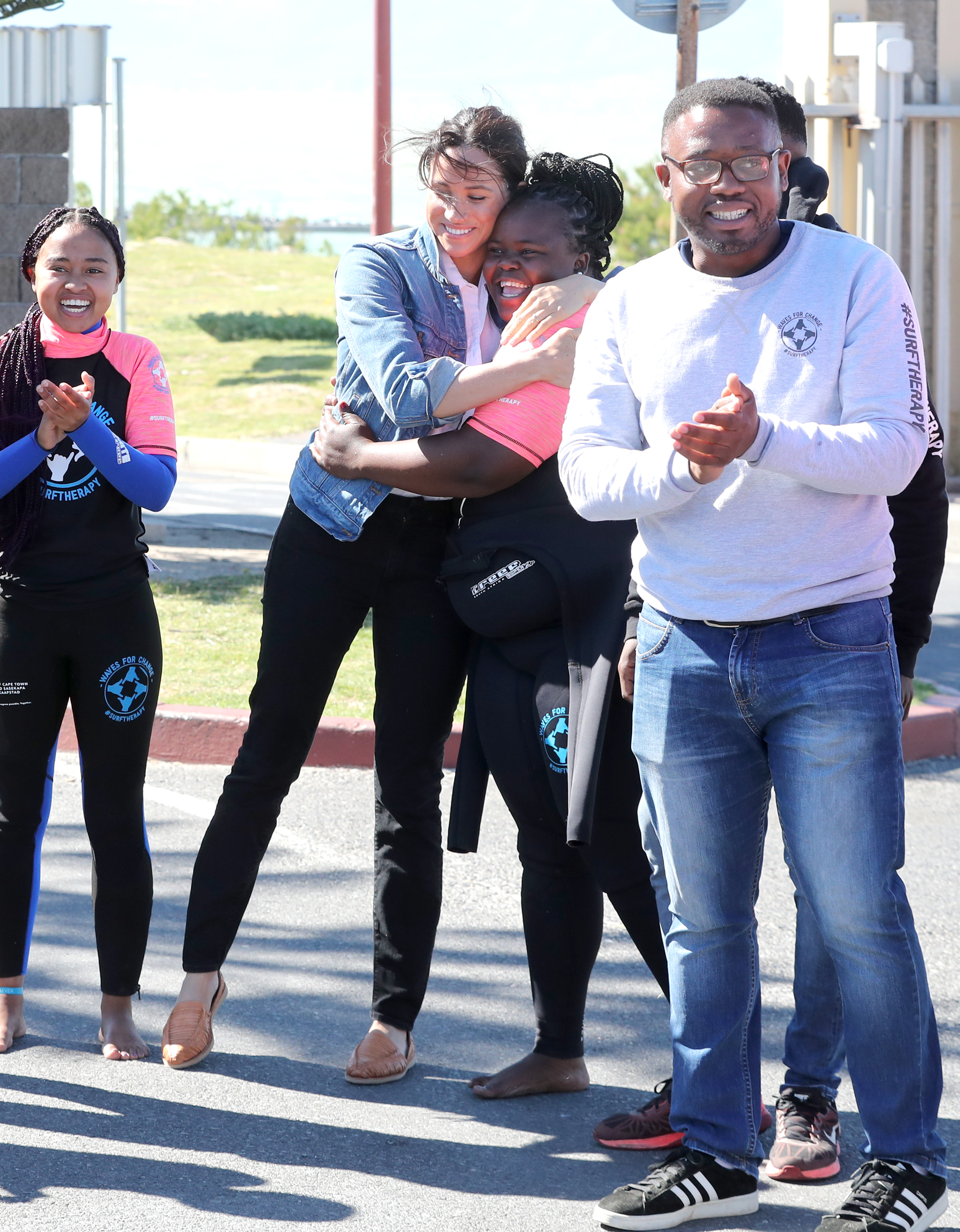 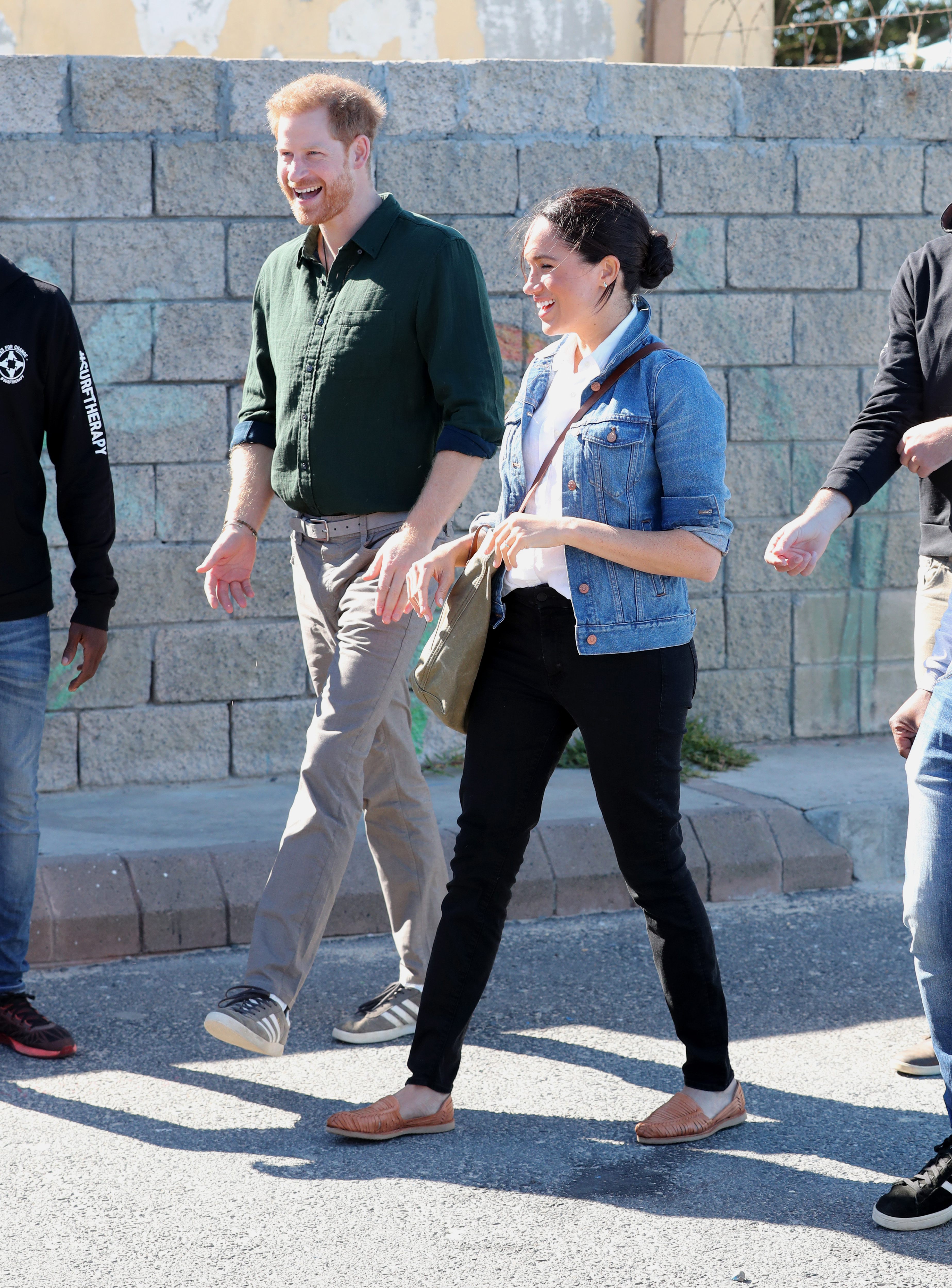 Meghan, 38, looked incredible in clothes from her Smart Set clothing range, donning her Misha Nonoo white shirt paired with Jigsaw trousers and a denim jacket as she started her day at Monwabisi Beach in South Africa as part of the ten-day tour.

Keeping it casual, she also had her £55 Le Specs sunglasses hooked onto the front of her shirt – while trying to keep her hair under control in the blustery winds.

She and Prince Harry, who wore a green shirt and grey trousers, appeared in good spirits as they were greeted this morning.

But they left four-month-old Archie at home for the busy day of engagements.

The duchess will later meet the Lunchbox Fund, an organisation which provides daily meals for South African schoolchildren.

The charity is one Meghan and Harry, 35, asked supporters to donate to after baby Archie was born in May.

They will then following meetings in line with the British Commonwealth with a meal with Dr Thomas Maes, who heads the Commonwealth Litter Program.

Meghan and Harry will then split off – with the new mum staying with baby Archie while her husband sets off to carry out his duties of Captain General of the Royal Marines.

The Duke will travel with the City of Cape Town Marine Unit by boat before the couple reunite at Bo Kaap in celebration of Heritage Day, a South African public holiday. 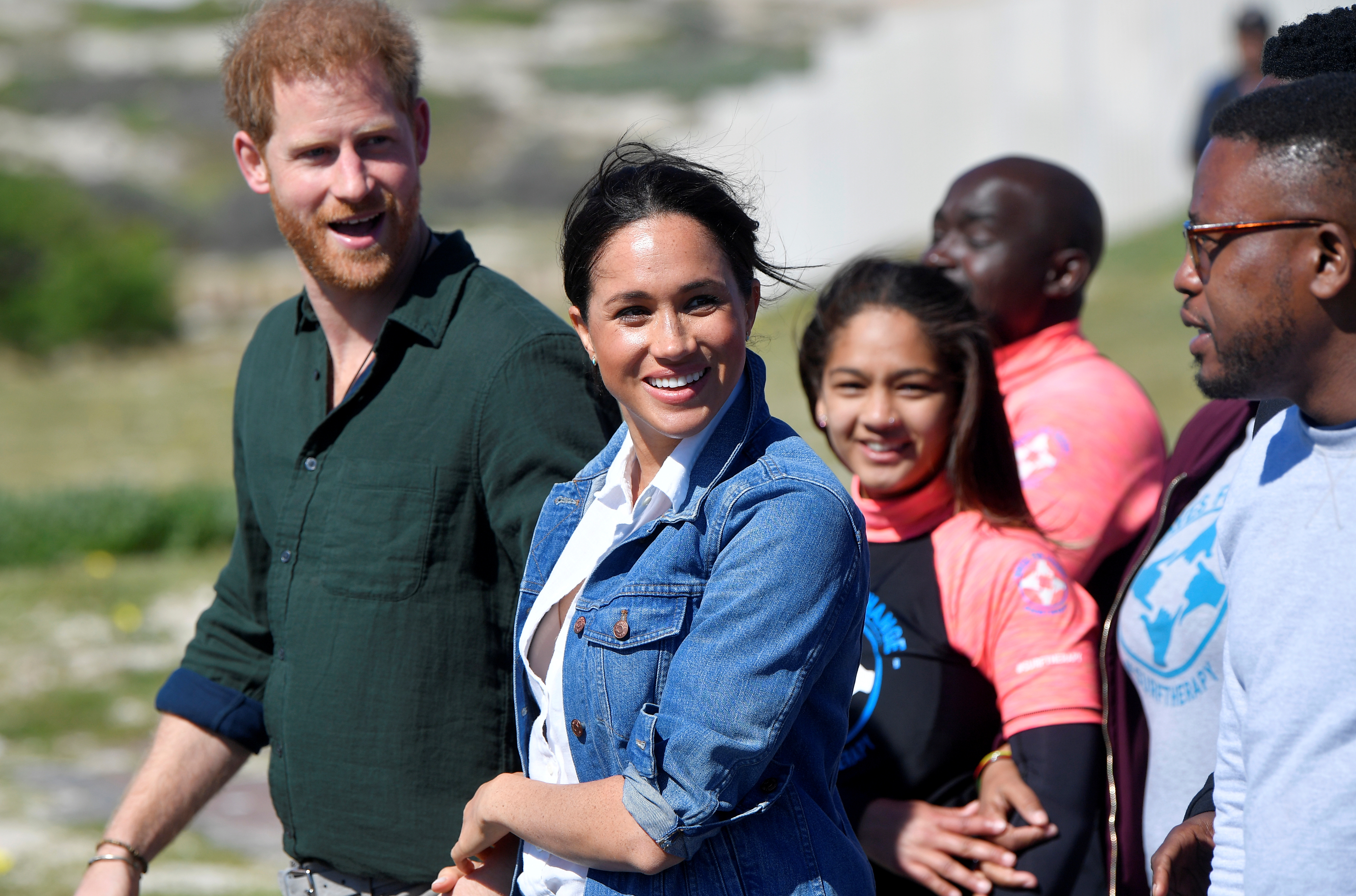 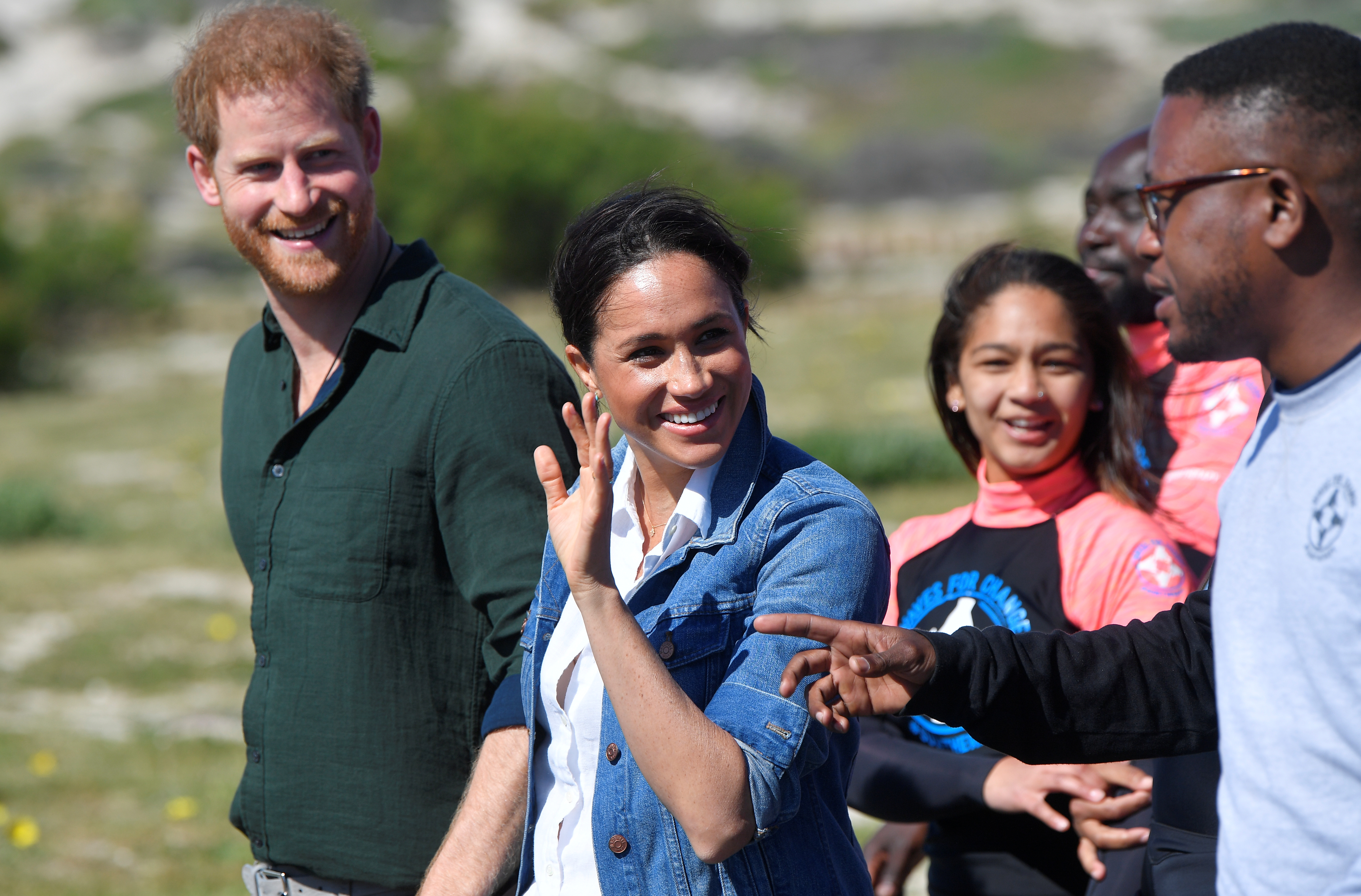 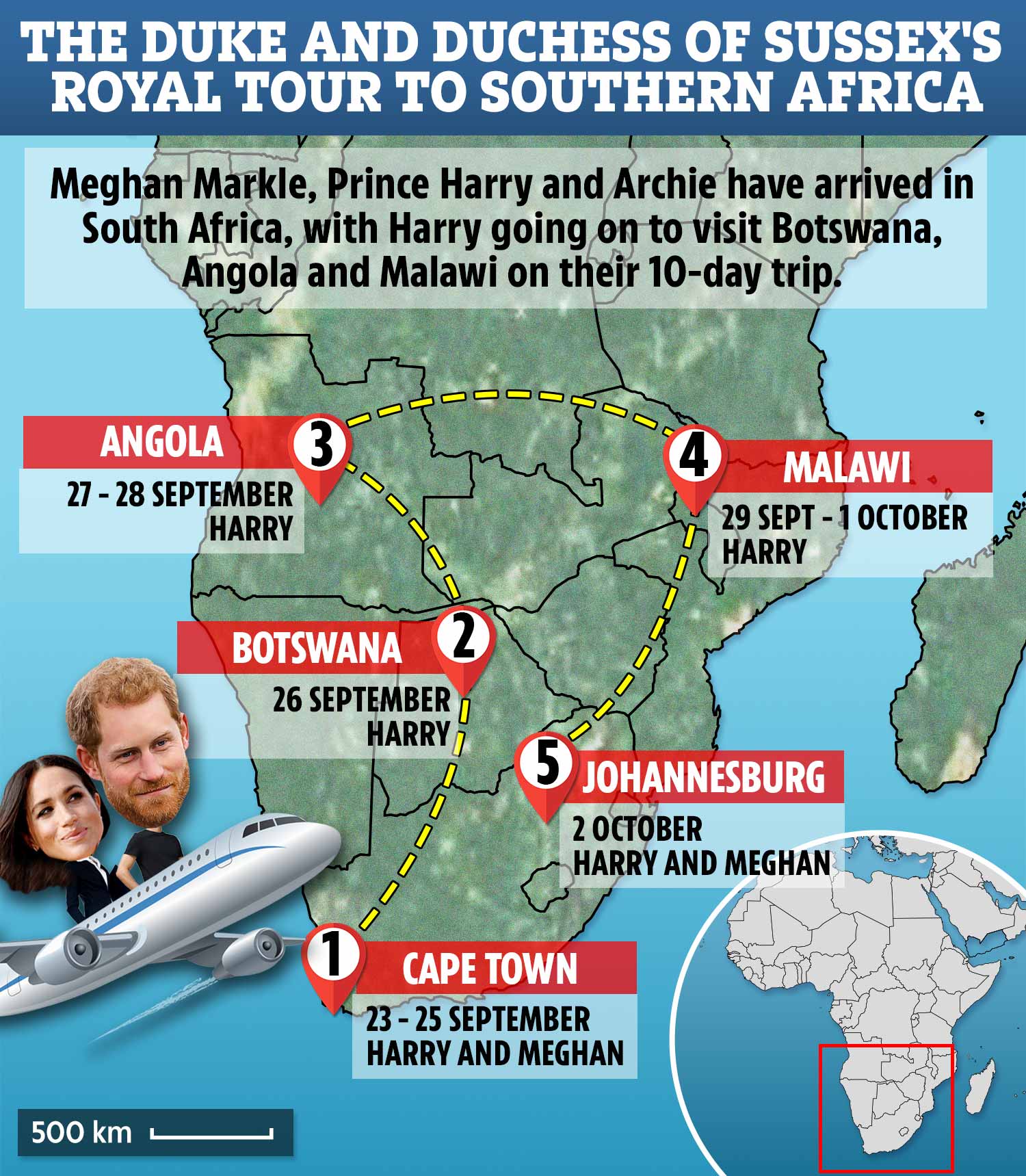 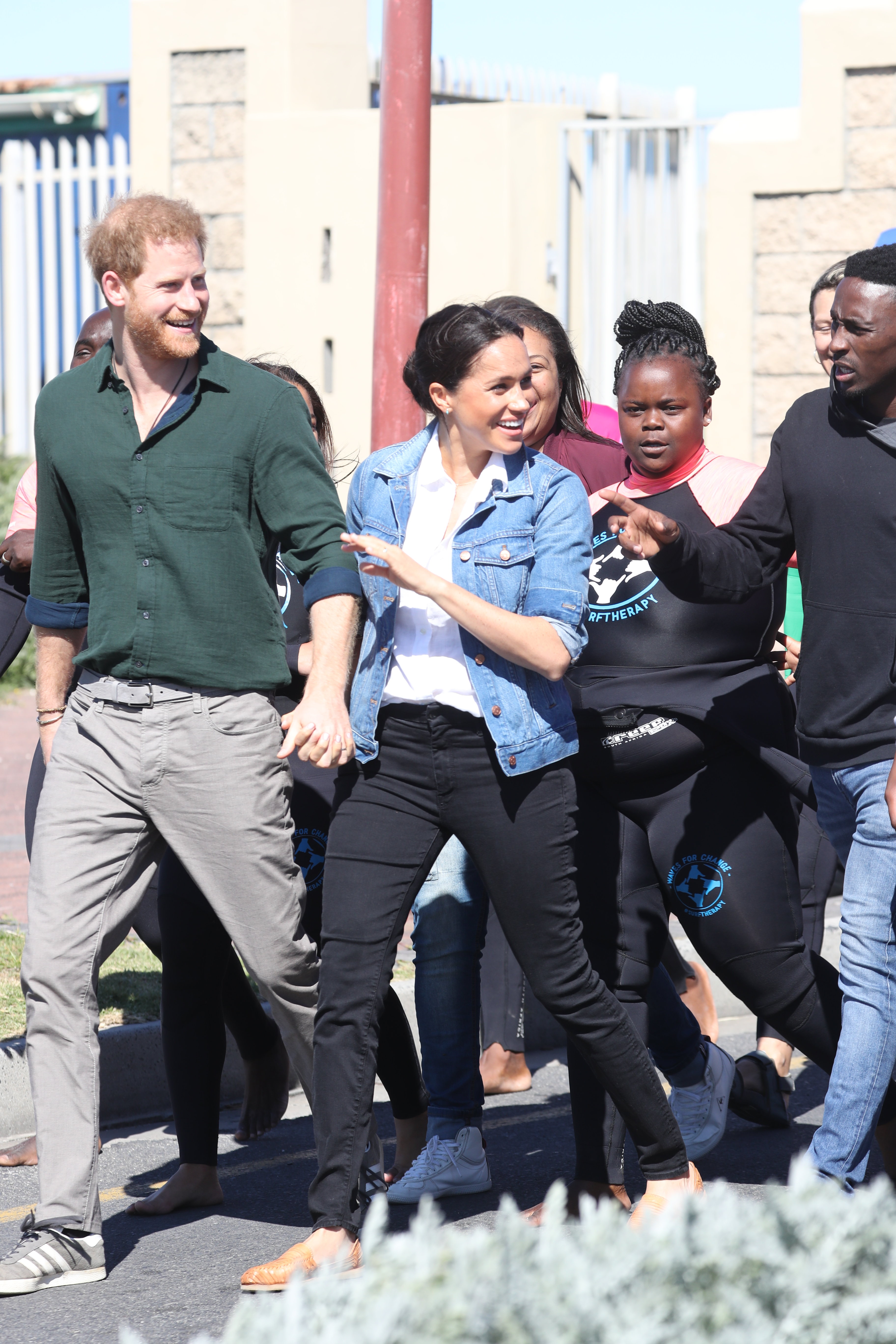 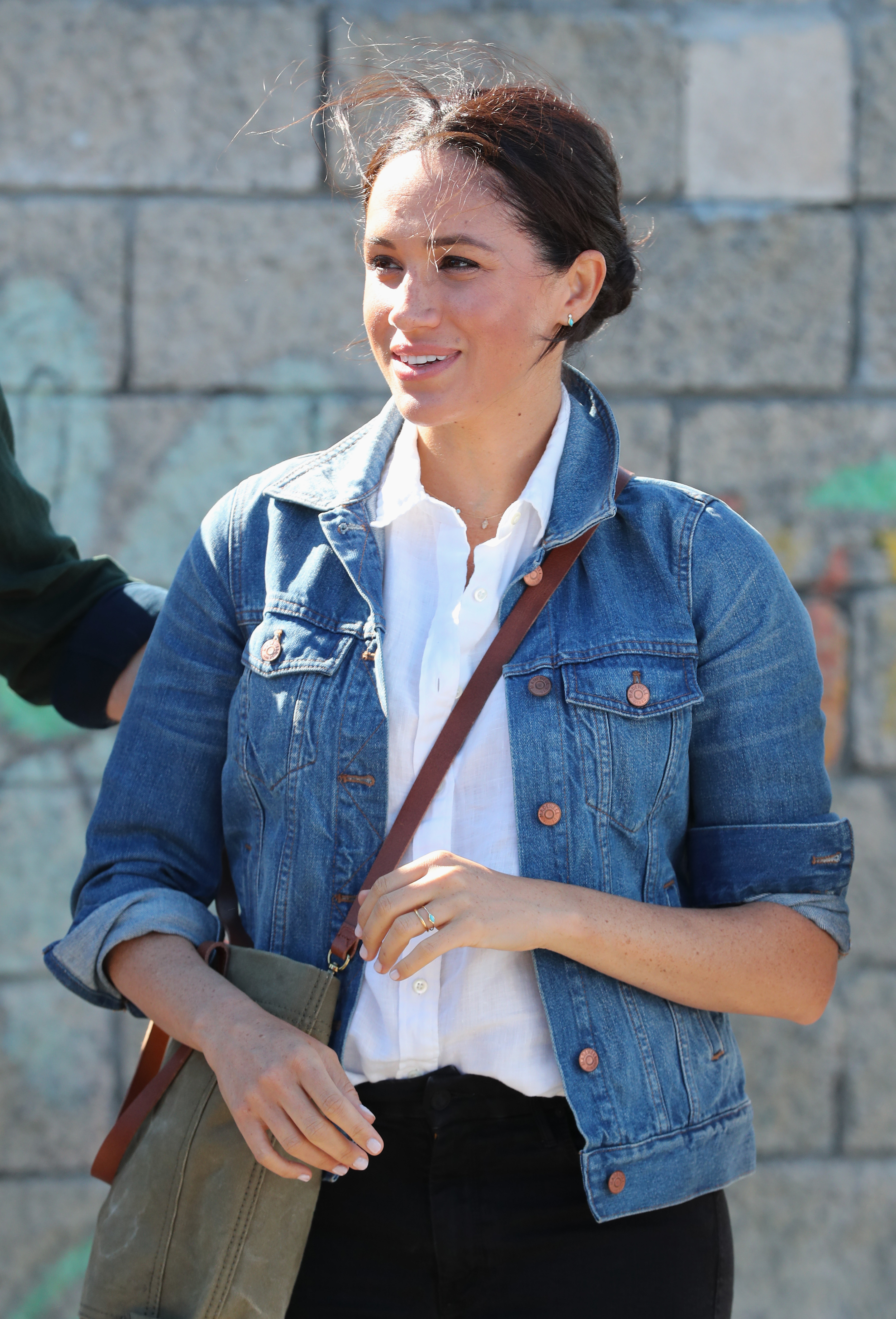 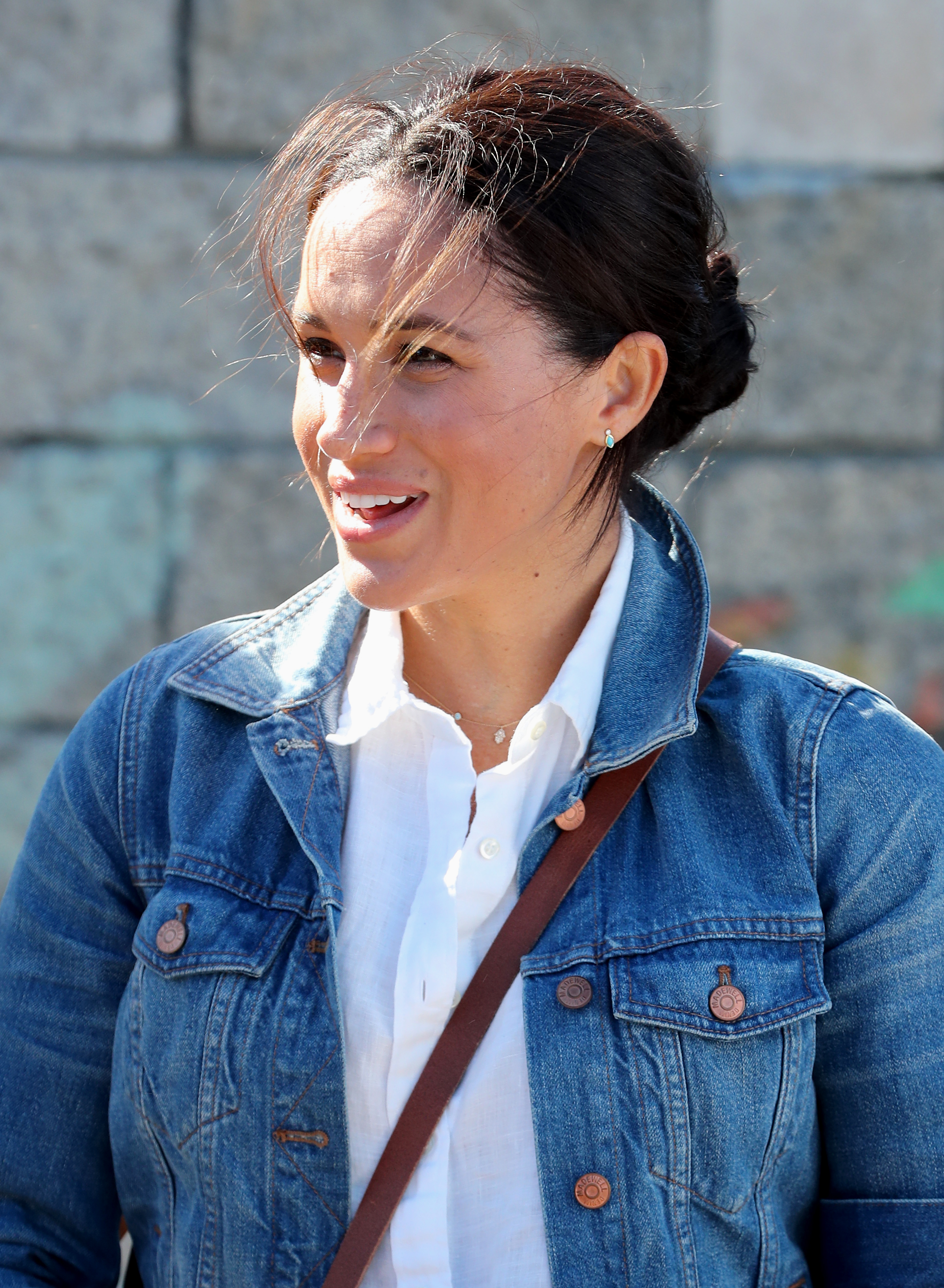 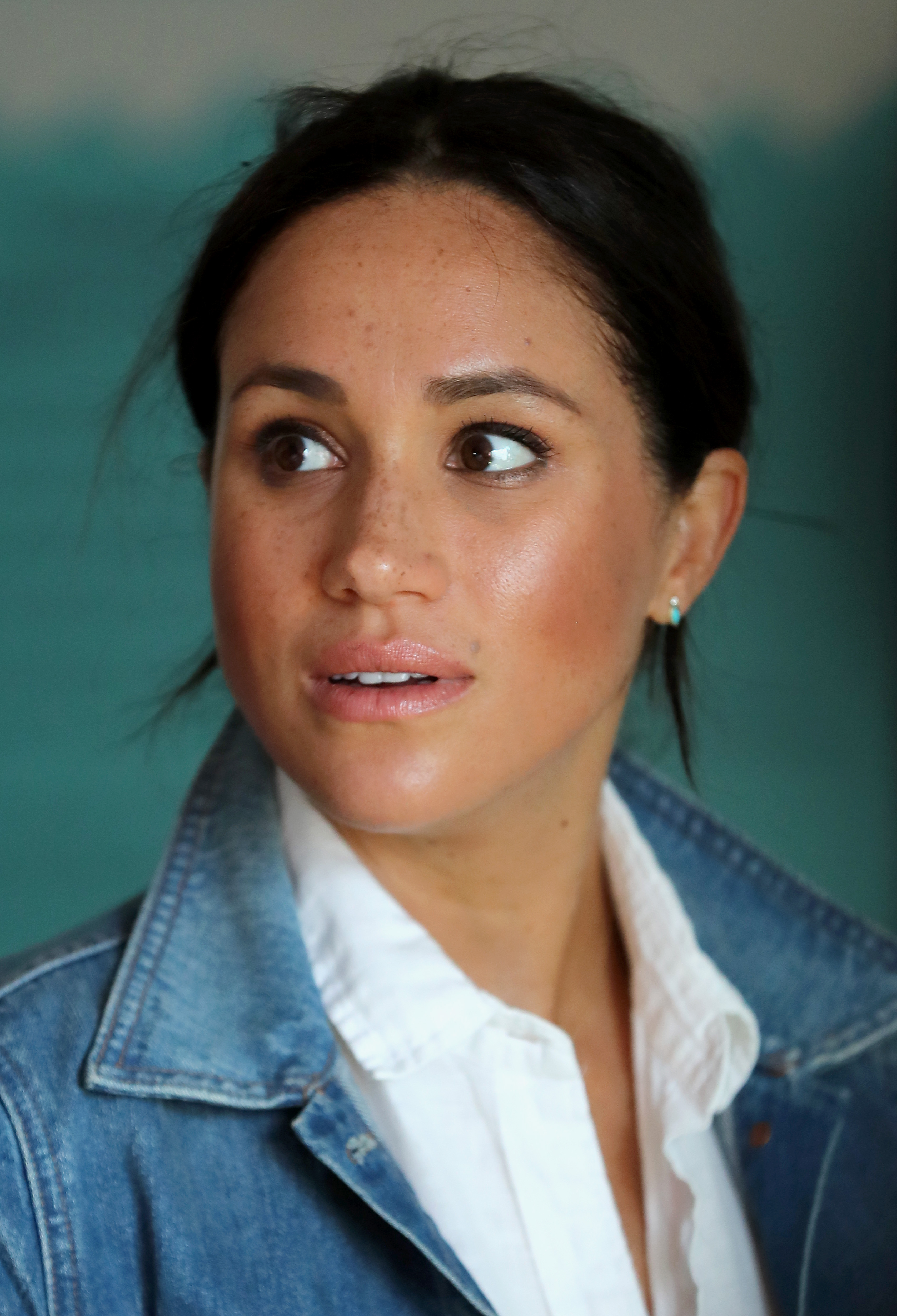 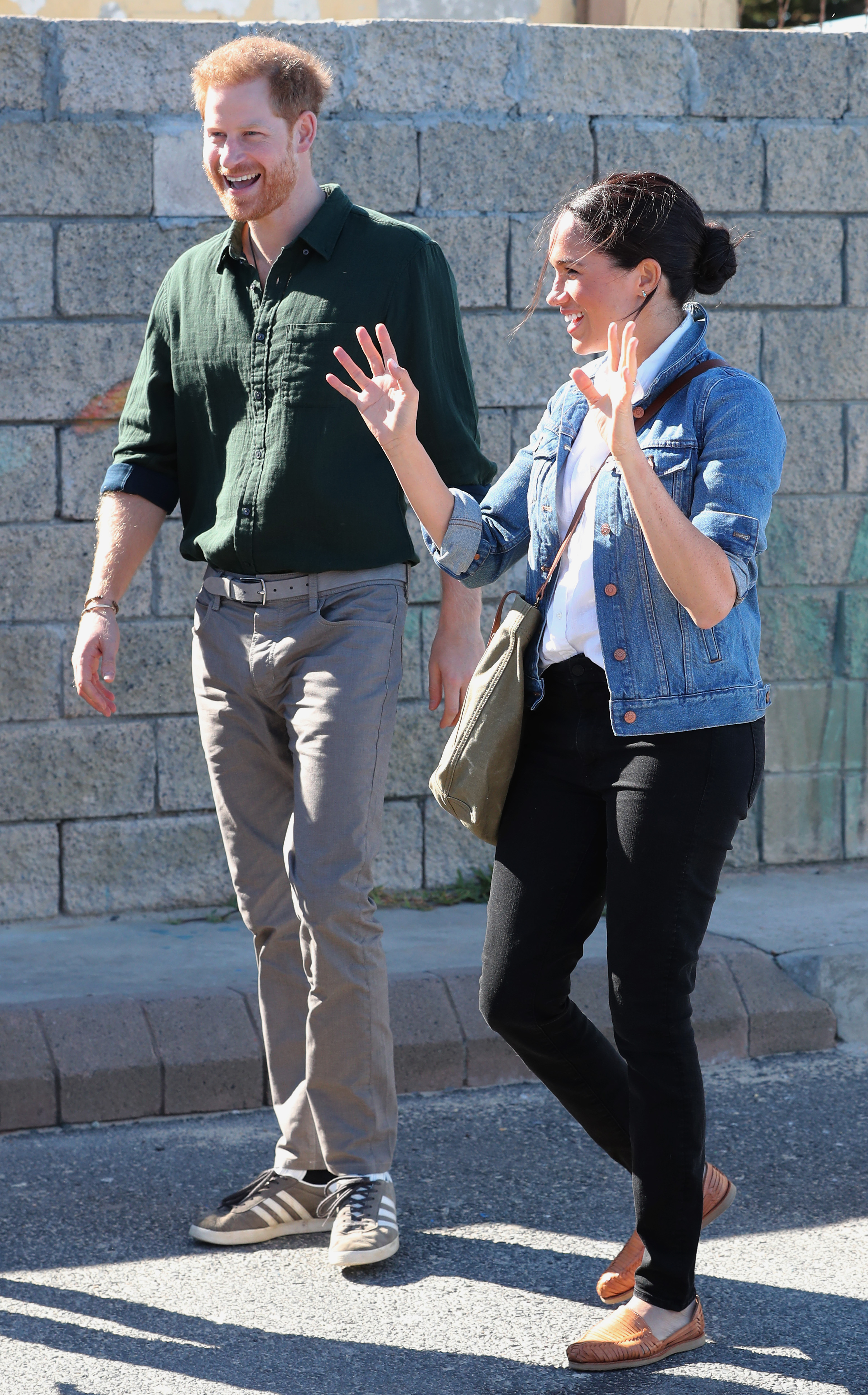 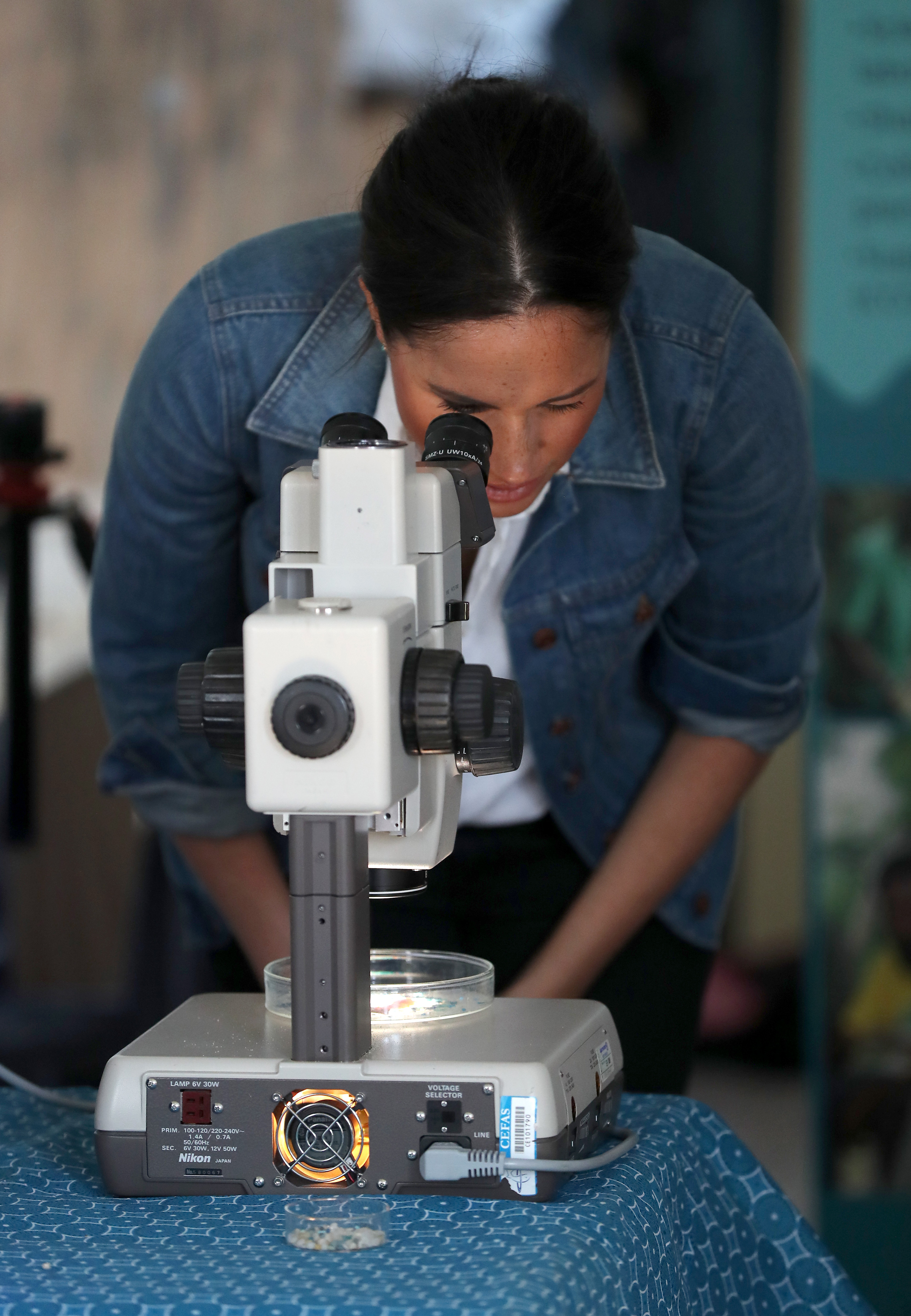 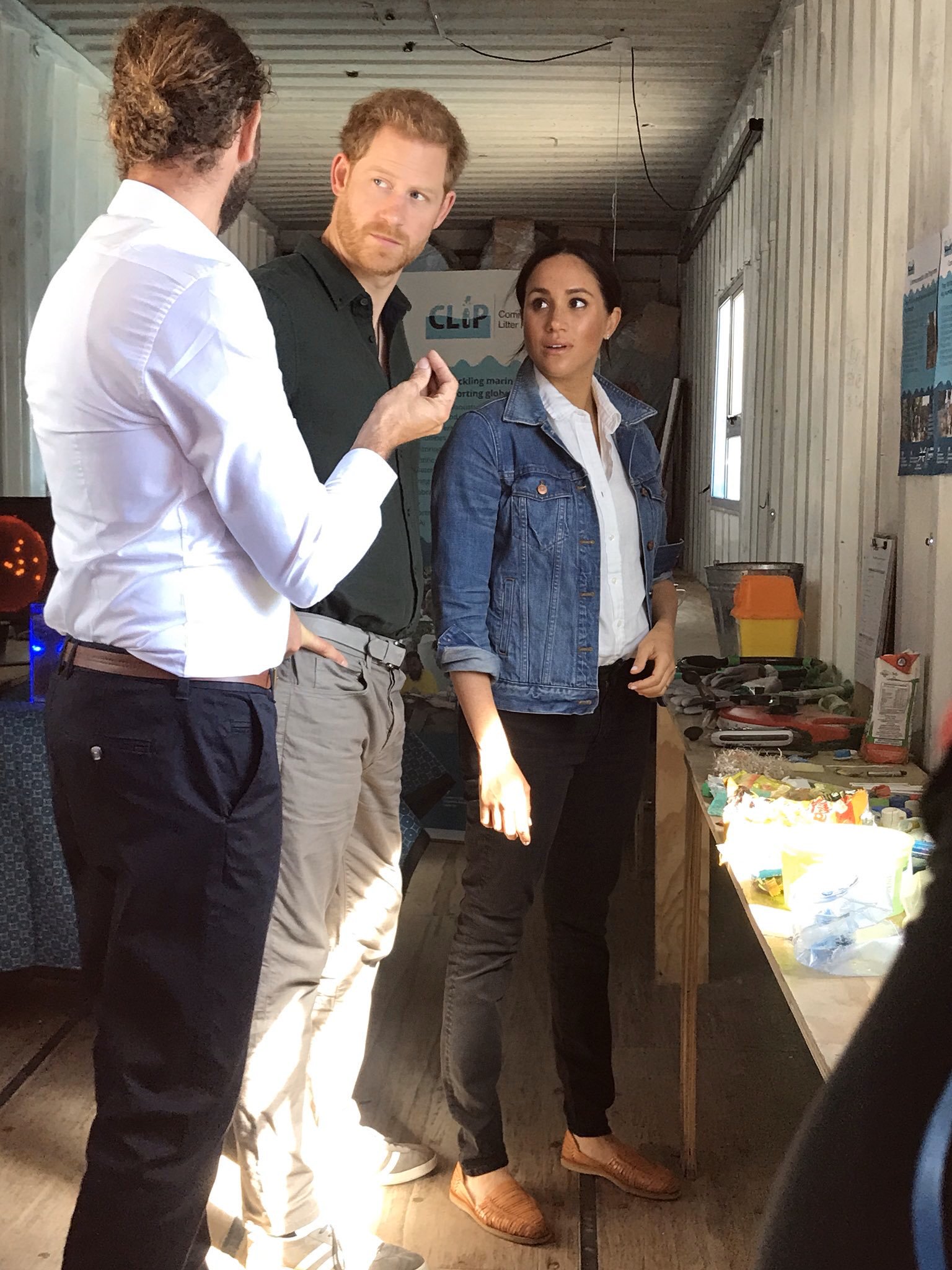 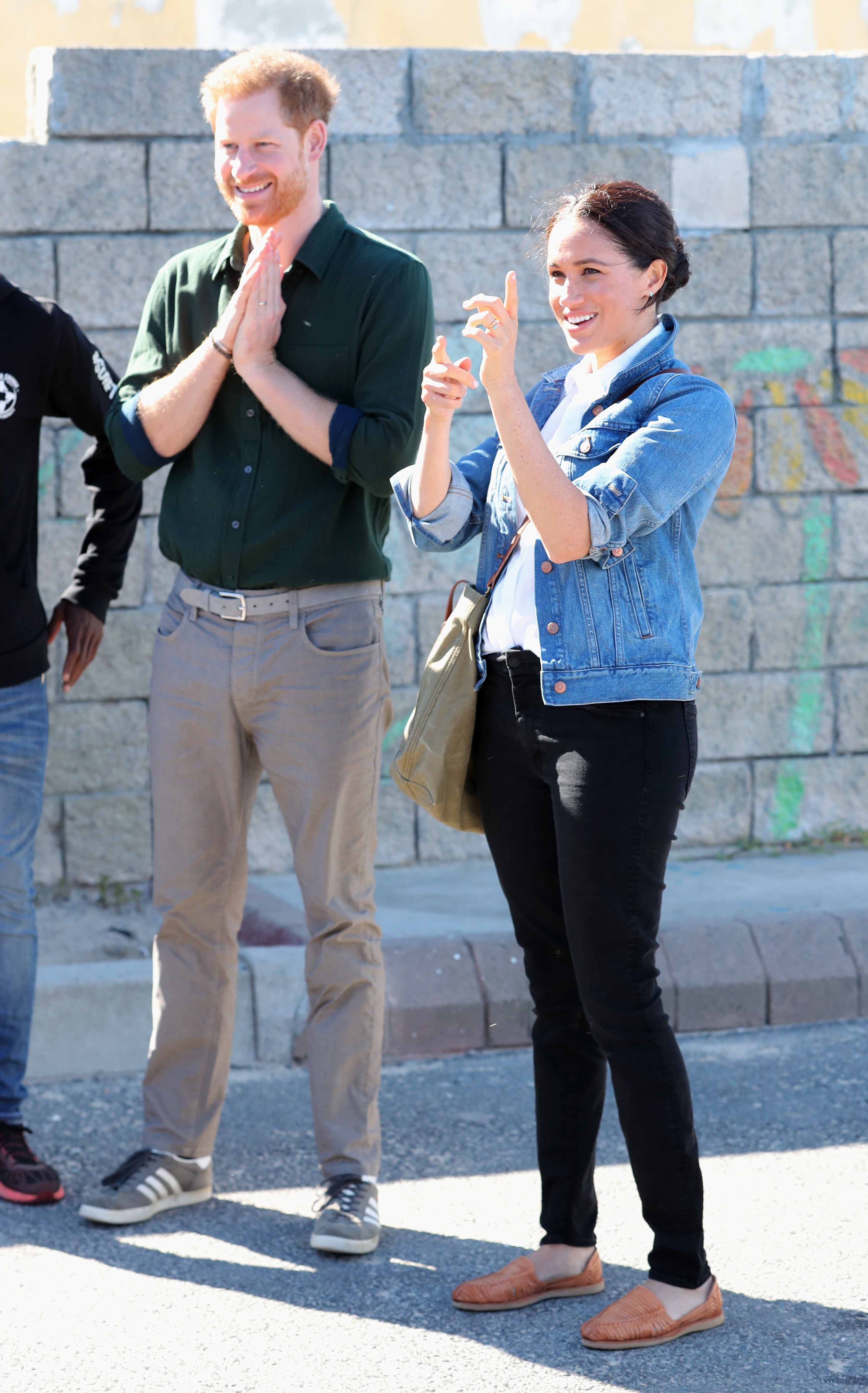 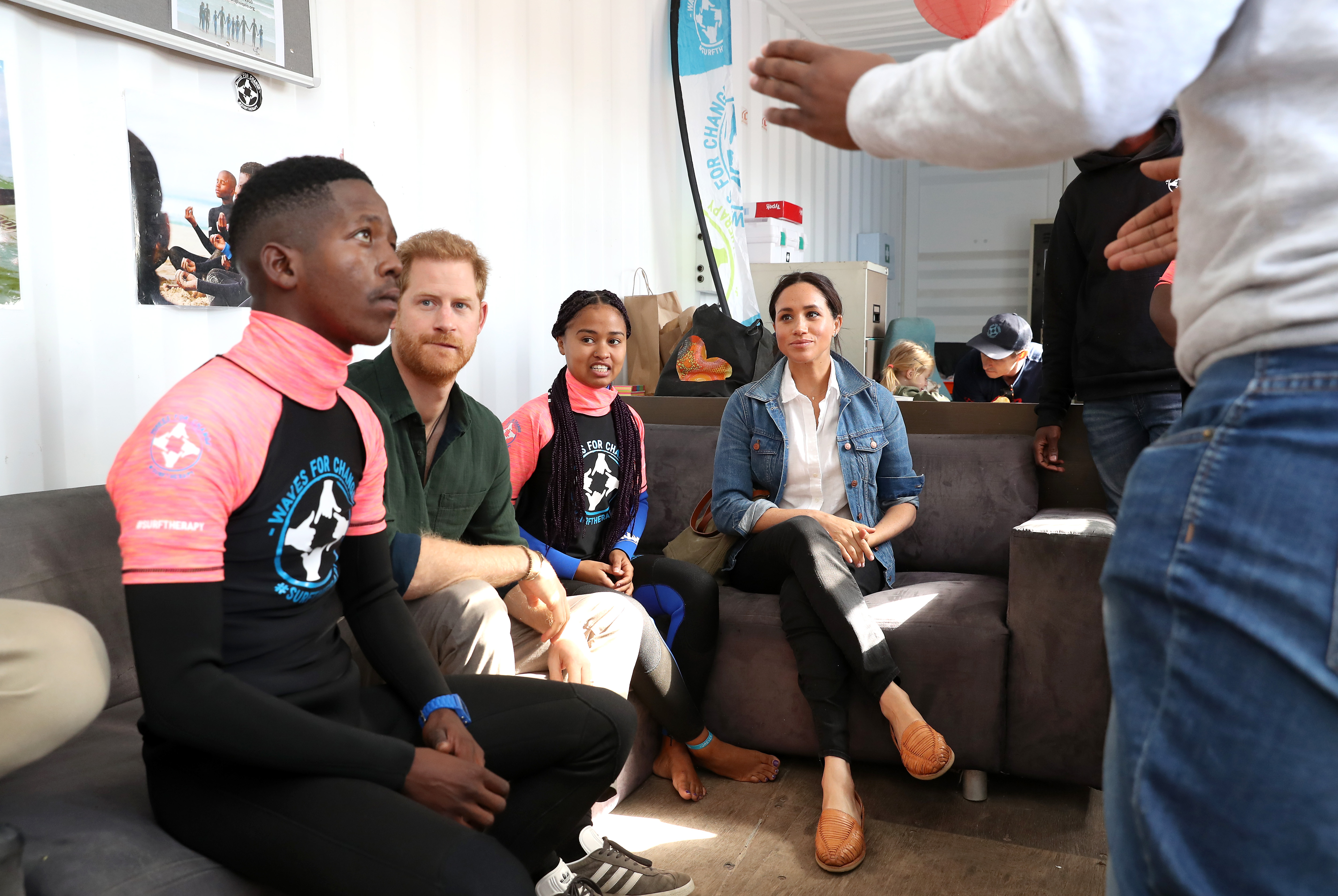 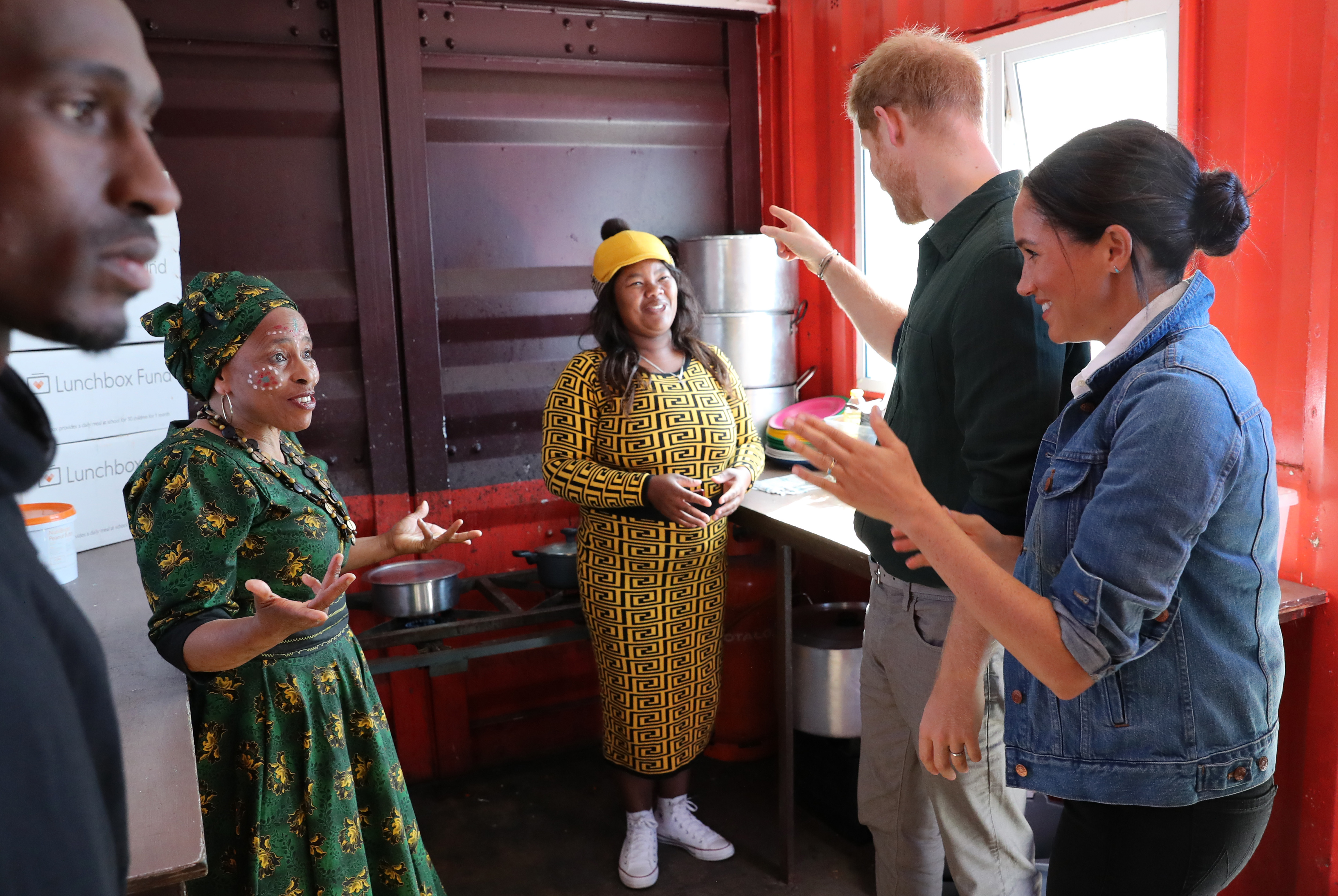 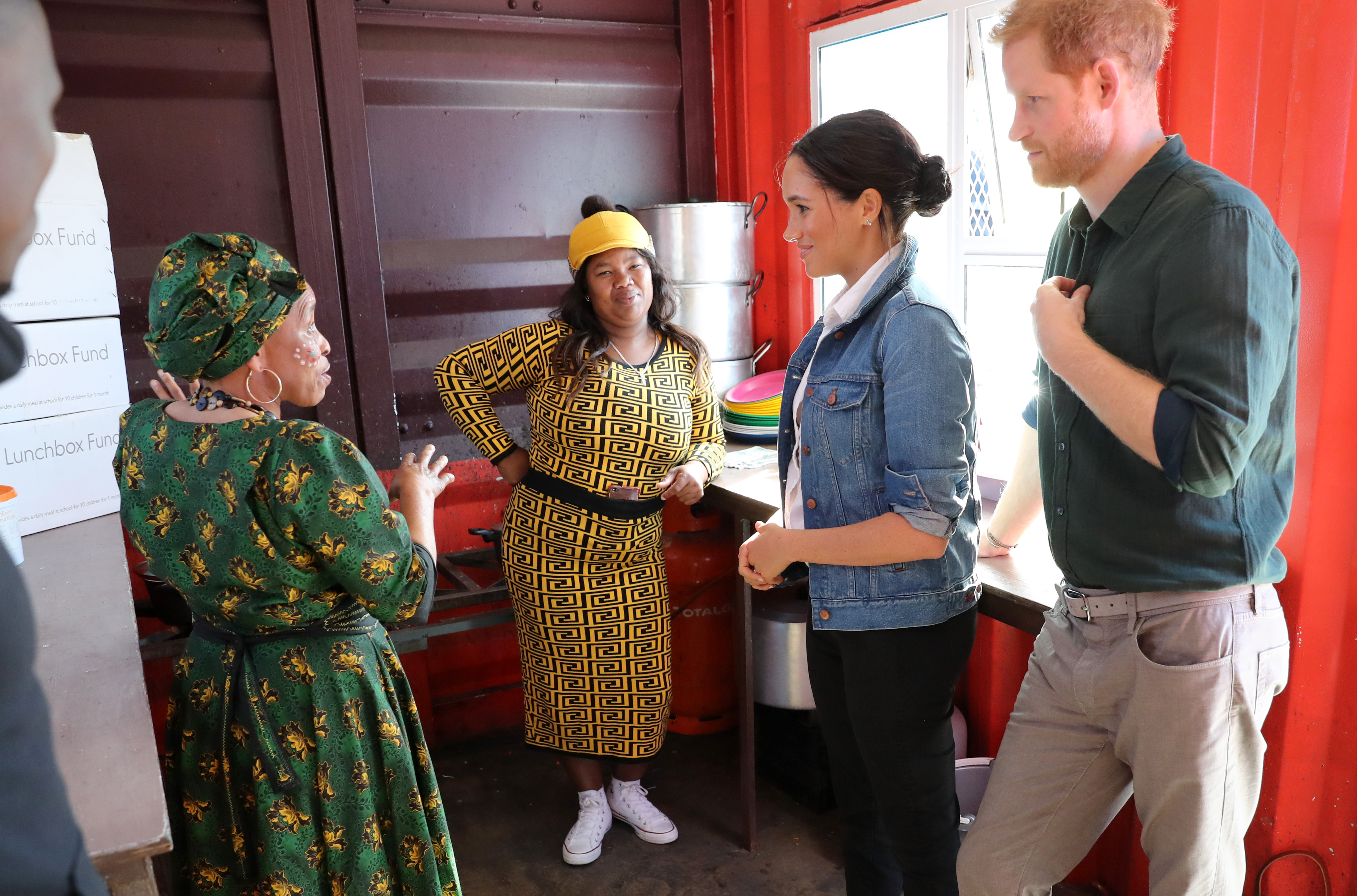 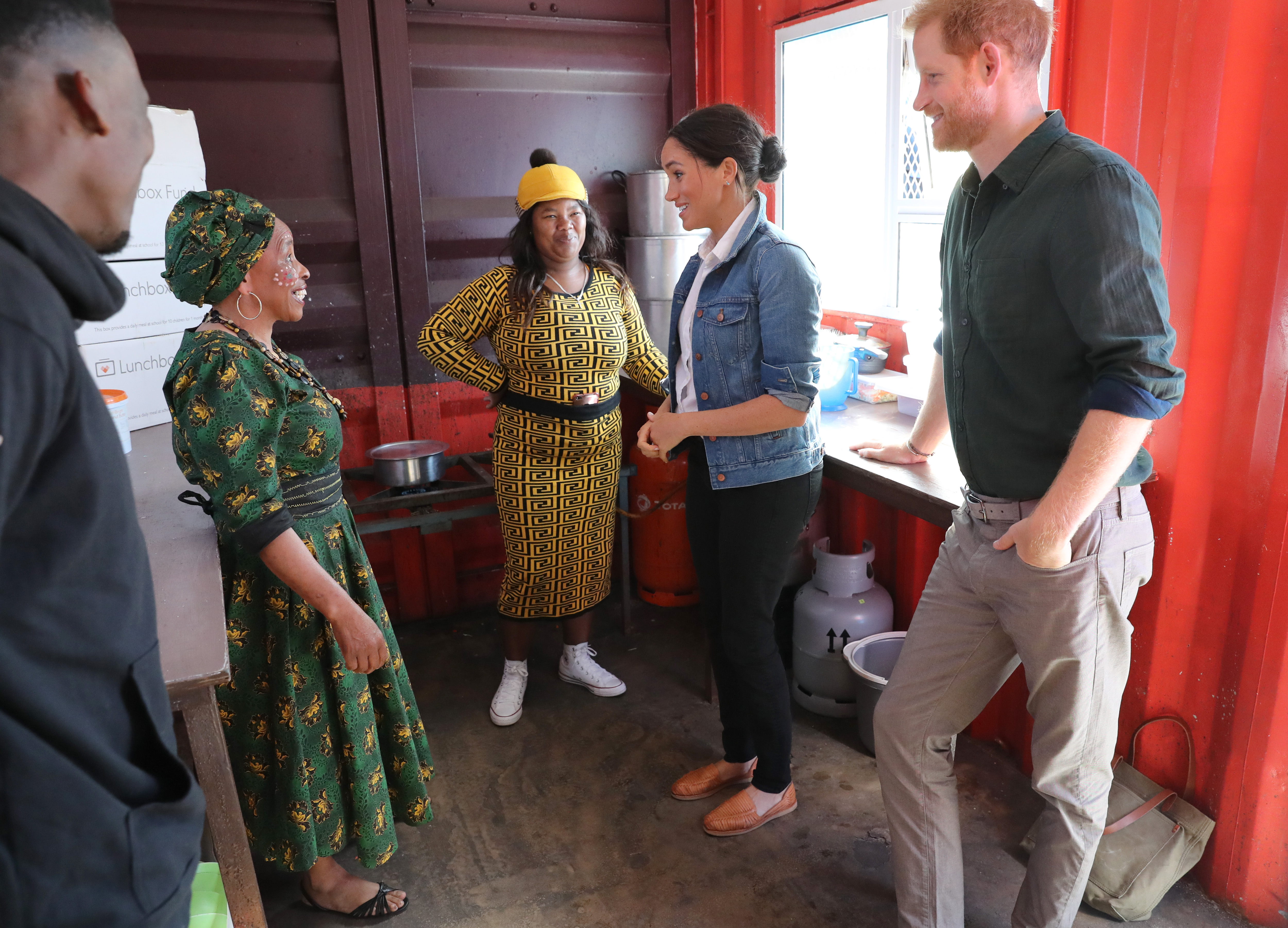 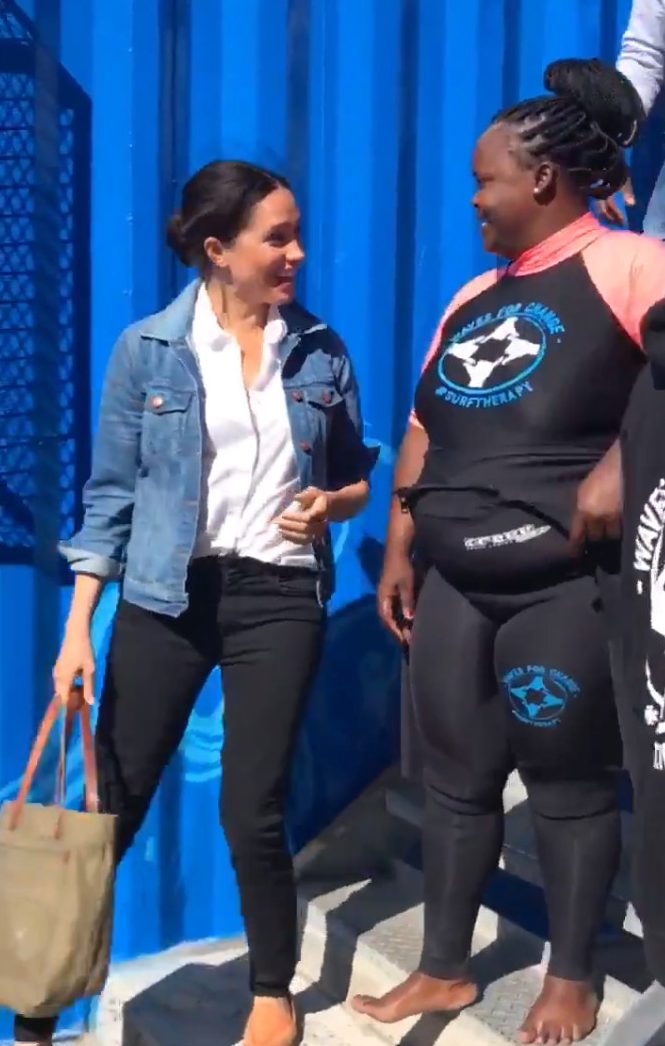 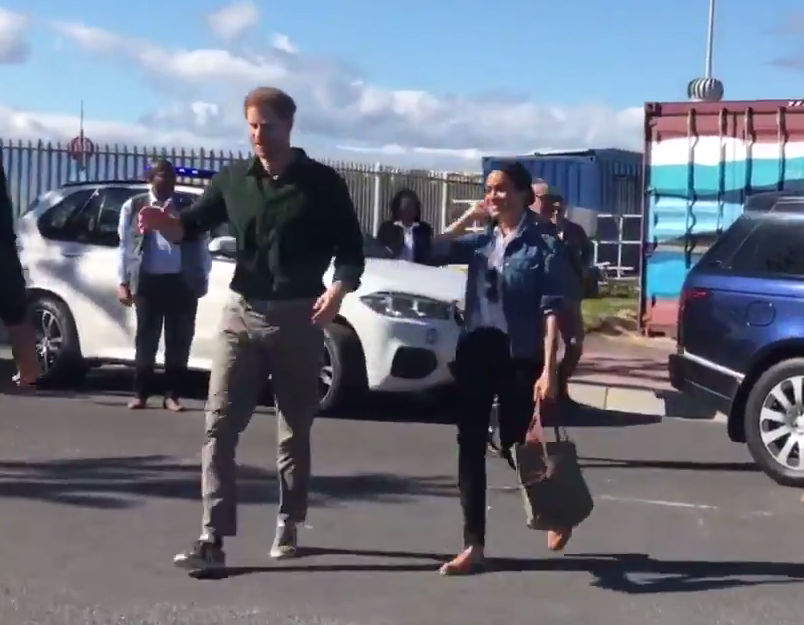 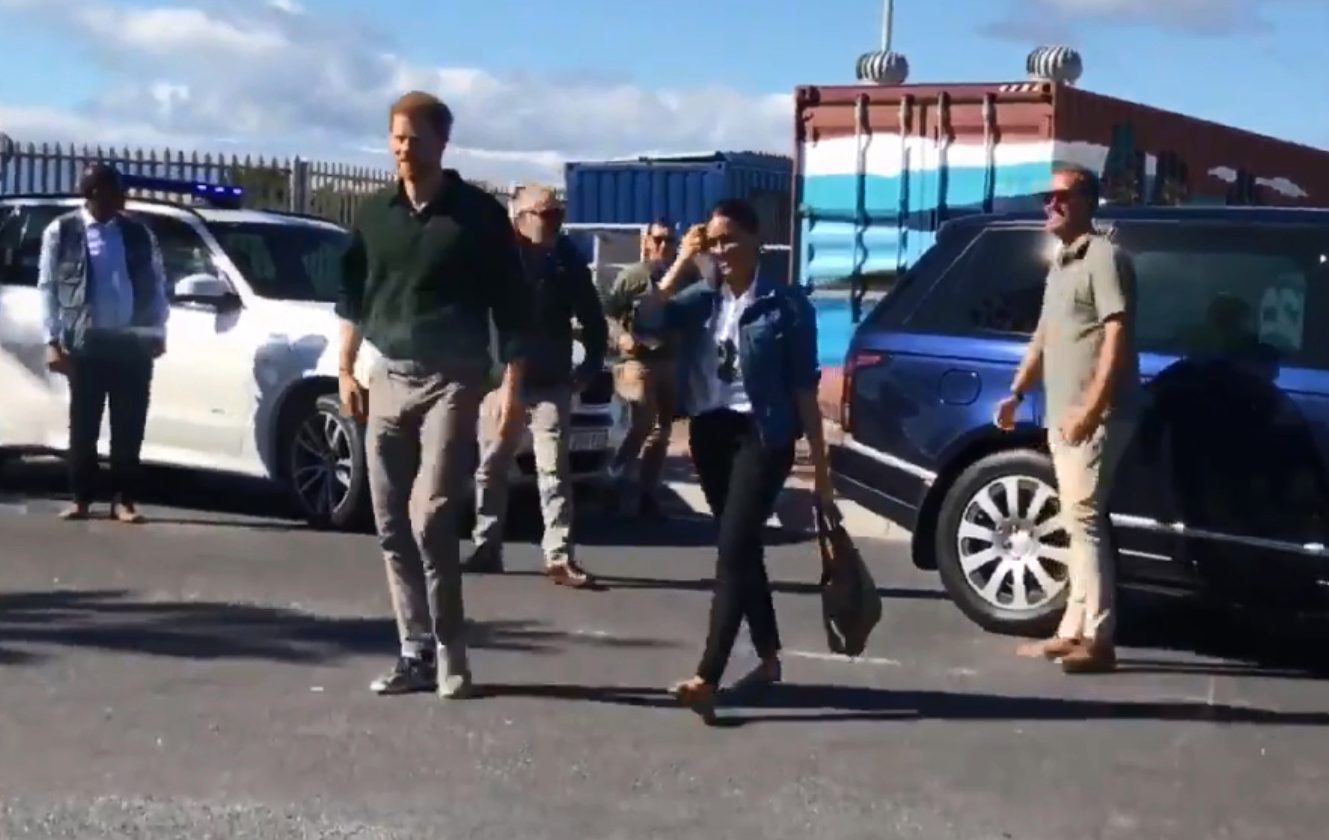 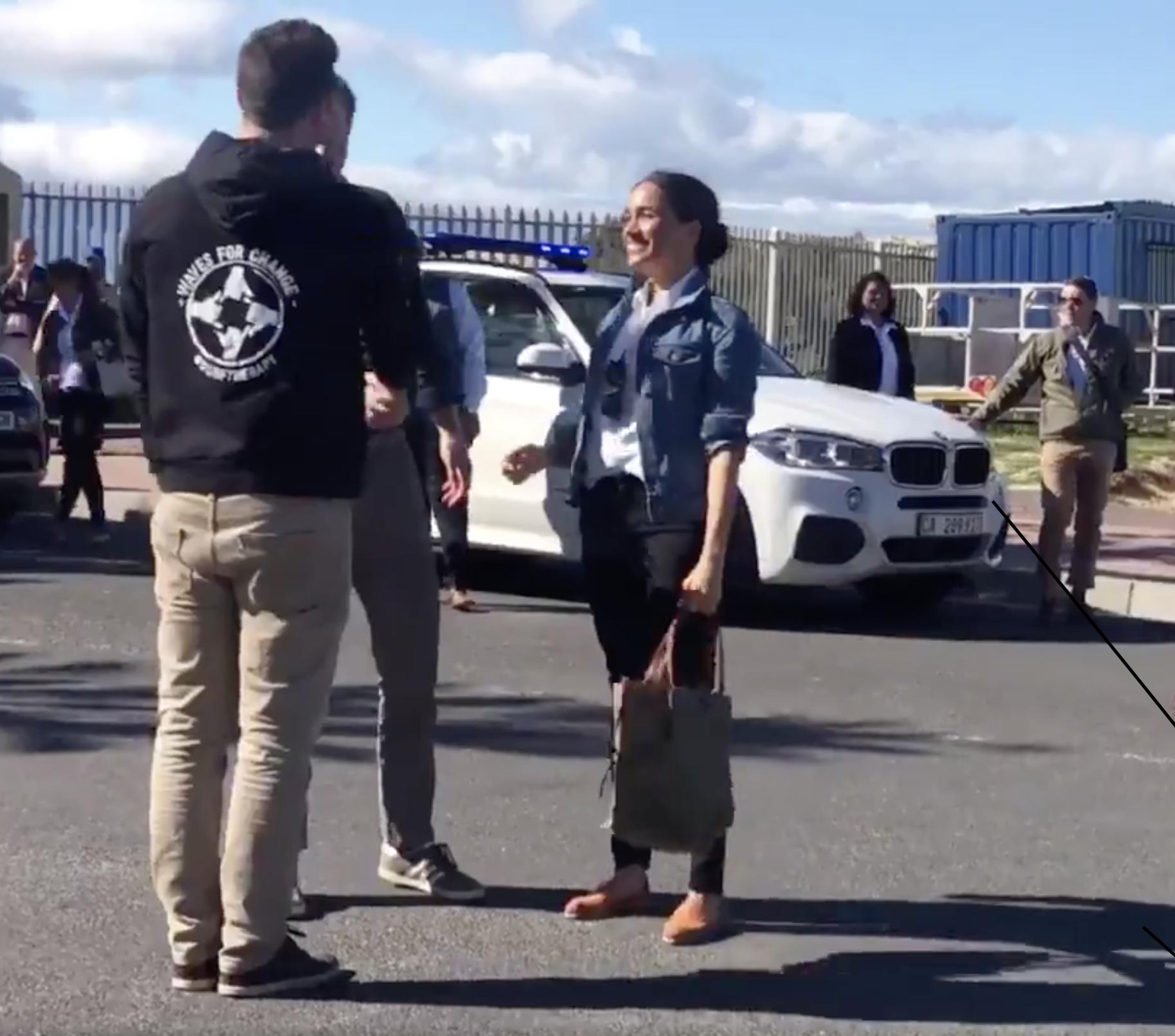 The first day the trip yesterday saw the couple touch down with Archie, who is on his first royal tour.

They headed to Nyanga, which is the murder capital of South Africa — a country itself known for having one of the world's highest homicide rates.

They were greeted with hugs, kisses, female dances in traditional costume, musicians playing and ecstatic youngsters waving their national flag.

Soon Harry was engaged in a spot of "dad dancing" as he joined in with a performance, sending the Duchess of Sussex into fits of hysterics.

Meghan herself was beckoned over, although she proved more of a natural than her spouse.

In tribute to the region, Meghan wore a dress by the label Mayamiko, an ethical and sustainable woman's wear and life style brand, producing clothes made in Malawi.

Surrounded by young women who have benefited from a female empowerment programme teaching them self-defence, the duchess took the unusual step of highlighting her mixed-race heritage.

'I'M HERE AS YOUR SISTER'

In a powerful speech to the hosts, Meghan said: “On a personal note while I’m here as a member of the royal family, I’m here with you as a mother, as a wife, as a woman, as a woman of colour and as your sister.

"Please know that my husband and I have been closely following what you’ve been experiencing here — as best we can from afar.

"And that everything that is being done on the ground is making the great change that you not only need but that you deserve."

The couple were then hugged by 81-year-old Somaya Ebrahim, who asked: "Where's Archie?"

She was told that four-month-old Archie, who is on his first ever tour, was sleeping.

Somaya was in the crowds when the Duke’s grandmother the Queen first visited Cape Town with her parents and sister in 1947.

The former District Six resident was forcibly removed to a Township with her family during the Apartheid era.

Somaya, who was just nine when she waved her flag for King George VI and his family, was overwhelmed by the meeting.

“It was amazing, they were so lovely,” she said afterwards. 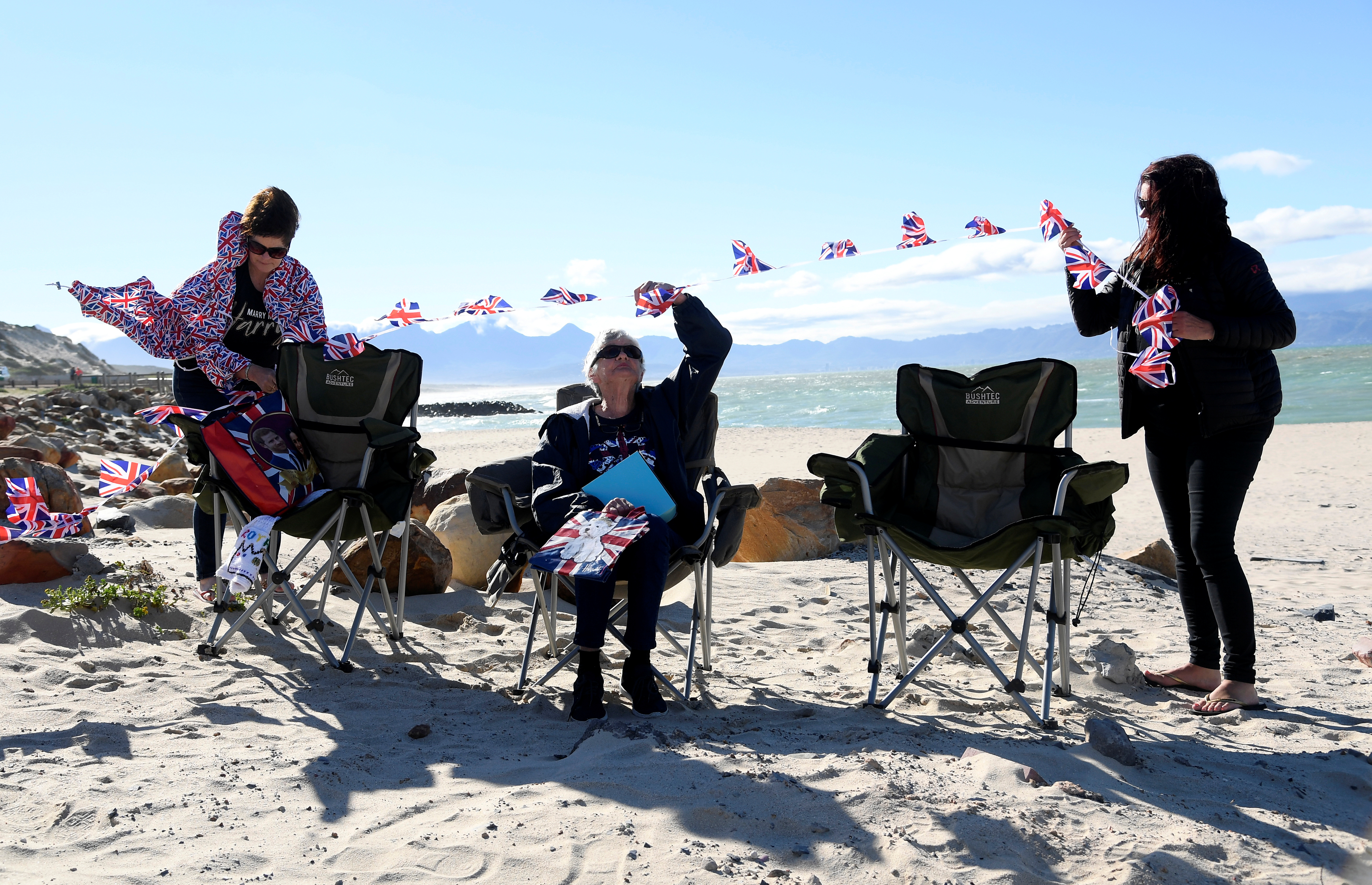 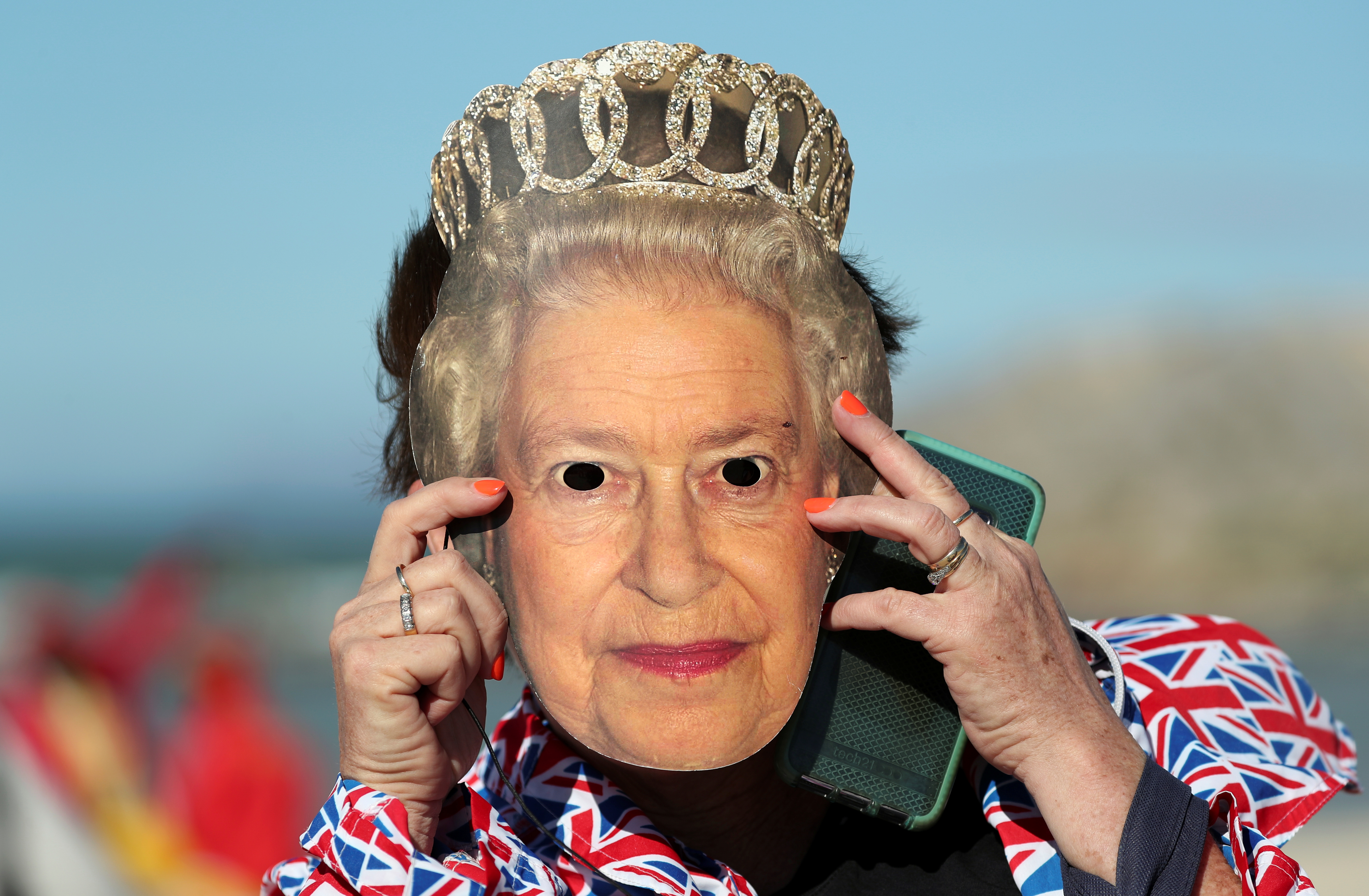