‘Melanie is feeling well’: President misspells his wife’s name in a tweet announcing she is back at the White House after a kidney procedure

President Trump misspelled First Lady Melania’s name as ‘Melanie’ in a tweet on Saturday welcoming her back to the White House after a long spell in hospital for a kidney procedure.

‘Great to have our incredible First Lady back home in the White House. Melanie is feeling and doing really well. Thank you all for your prayers and best wishes!’ Trump wrote, before the tweet was swiftly deleted and replaced with a correct version.

Melania been at Walter Reed National Military Medical Center near Washington since having a ‘successful’ embolization procedure on Monday for an unspecified kidney condition that the White House said was benign.

The President’s tweet (top) came after the First Lady was released from the Walter Reed National Military Medical Center near Washington, where she had been since having a kidney procedure on Monday. It was quickly met with replies poking fun at Trump’s error (bottom)

Other Twitter users were quick to poke fun at the President’s error. ‘Wonderful. But do tell us more about this Melanie,’ wrote Jarrett Bellini.

‘Glad to hear that Melanie is doing well. Please let us know if you hear from Melania,’ another added.

And Michael Blackman quipped: ‘I can’t believe the Trump cheated on Melania with Melanie.’

The first lady said on Twitter on Wednesday that she was ‘feeling great’. She thanked the Walter Reed staff and her well-wishers, and added that she was looking forward to going home.

‘A sincere thank you to Walter Reed Medical Unit & to all who have send good wishes & prayers! I am feeling great & look forward to getting back home to the White House soon,’ she said.

On Tuesday, the president tweeted to say it was a ‘successful procedure,’ describing his wife as being ‘in good spirits’ and offering his thanks ‘to all of the well-wishers!’

He spent over an hour at the hospital before departing, without addressing waiting reporters, via motorcade under stormy skies.

The White House did not offer any additional details on Mrs. Trump’s condition, though Vice President Mike Pence described the procedure as ‘long planned’ as he opened a speech at an evening event celebrating Israel’s independence.

‘Melania is already on the mend,’ Pence said. 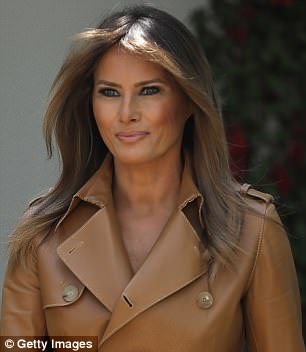 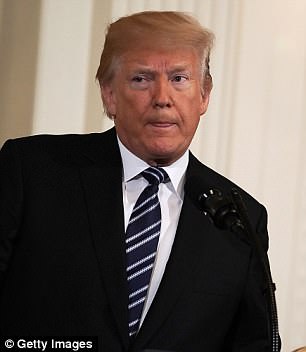 The first lady (left, on May 7) said on Twitter on Wednesday that she was ‘feeling great’. Trump (right, on May 18) visited her and said the procedure was a success

Other Twitter users were quick to poke fun at the President’s error. ‘Glad to hear that Melanie is doing well. Please let us know if you hear from Melania,’ one wrote

In the Senate, Minority Leader Chuck Schumer, D-N.Y., sent well wishes for ‘a speedy recovery to the first lady.’

She was last seen in public on Wednesday at a White House event where she and the president honored military mothers and spouses for Mother’s Day.

Two urologists who have no personal knowledge of Mrs. Trump’s condition said the most likely explanation for the procedure is a kind of noncancerous kidney tumor called an angiomyolipoma.

They’re not common but tend to occur in middle-aged women and can cause problematic bleeding if they become large enough, said Dr. Keith Kowalczyk of MedStar Georgetown University Hospital.

‘The treatment of choice’ is to cut off the blood supply so the growth shrinks, added Dr. Lambros Stamatakis of MedStar Washington Hospital Center.

Doctors do that with an embolization, meaning a catheter is snaked into the blood vessels of the kidney to find the right one and block it. 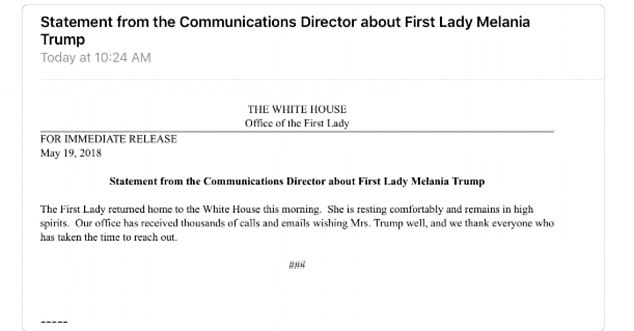 Most of the time, these benign tumors are found when people undergo medical scans for another reason, but sometimes people have pain or other symptoms, Kowalczyk said. Many times, embolization patients go home the same day or the next.

The president had no official public appearances Monday and declined to answer shouted questions from reporters about his wife as he departed the White House for Walter Reed.

The former model from Slovenia is Trump’s third wife and the couple has been married for 13 years. They have a 12-year-old son named Barron.

Mrs. Trump, who has been gradually raising her profile as first lady, recently hosted her first state dinner and launched a public awareness campaign to help children.

With the president watching, Mrs. Trump last week unveiled the ‘Be Best’ campaign, which she said will focus on childhood well-being, social media use and opioid abuse.

Mrs. Trump joined her husband last month to host the prime minister of Japan for a two-day summit at the Trumps’ Florida estate, and the Trumps hosted the president of France at the White House on a three-day state visit, including a lavish state dinner.

Separately, a former Playboy model has revived her allegations of a 10-month affair with Trump in 2006. Trump also denies the allegations from Karen McDougal.

Mrs. Trump has, at times, has been noticeably absent from her husband’s side. But both made a point of displaying affection during last week’s Rose Garden event where she announced the ‘Be Best’ initiative.

The first lady lived full time in New York during the administration’s opening months so Barron would not have to change schools midyear. She and Barron moved to the White House last June.

A kidney embolization is a simple procedure done to intentionally block off a blood vessel in the kidney.

‘Embolization is a minimally invasive procedure to stop blood flow to parts of an organ (in this case kidney),’ Dr Jamin Brahmbhatt, a urologist at Orlando Health, explains.

‘It can be used to treat malignant and benign lesions.’

WHY IS IT DONE?

An embolization is often used as a first-line treatment for any kind of gastrointestinal bleeding, but it can also be preventative.

It can be performed on any organ that has a growth or blood vessel clump.

There are typically two scenarios for performing a kidney embolization:

There are three things on which kidney embolizations are peformed: 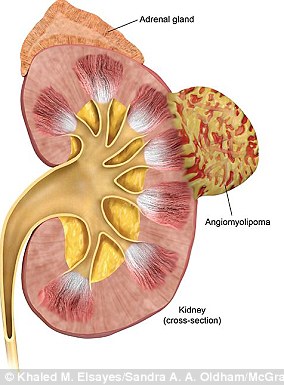 Melania Trump’s operation was reportedly for a ‘benign’ kidney condition.

These growths disproportionately affect women (four times more than men), and 80 percent of them are spontaneous (compared to 20 percent which are genetic).

Surgery is only recommended if it grows too big.

‘If they’re under four centimeters, we just monitor it,’ Dr Brahmbhatt explained.

‘But if it goes over four centimeters, the risk of it rupturing goes up way high, so that’s when we suggest treatment.’

HOW IS IT DONE?

Typically, a patient is given sedation and the entire procedure is done through an X-ray view.

The doctor makes a small incision near the groin, and guides very long, skinny tube, called a catheter, through a blood vessel toward the kidney.

There, an ‘agent’ or chemical  that causes the blood to clot is injected, cutting off the flow of blood to through that particular vessel.

The entire procedure takes up to three hours and hospital stays afterwards vary.

HOW IS THE RECOVERY?

‘After embolization patients often have nausea, vomiting, fever, and pain that could last a few days,’ Dr Brahmbhatt said.

Embolizations are minor operations, with relatively low risks of complications or side effects.

In very rare cases, patients may have a bad reaction to the dye used in the procedure.

More commonly, some have discomfort or minor bleeding after an embolization, and as such they are monitored over night.

Some people develop fever, weakness and nausea, a temporary condition called ‘post-embolization syndrome,’ that usually subsides within a few days.

Will Smith on His Father's Death: It 'Sort of Released Me To Be Me'