They are two of the nation’s favourite crime dramas, which had TV viewers gripped for weeks.

But Met Police commissioner Dame Cressida Dick has revealed she was ‘outraged’ by the BBC’s Line of Duty, and even switched off the ‘ludicrous’ Bodyguard.

The series, both written by Jed Mercurio, became ratings hits for BBC One, and won numerous awards. 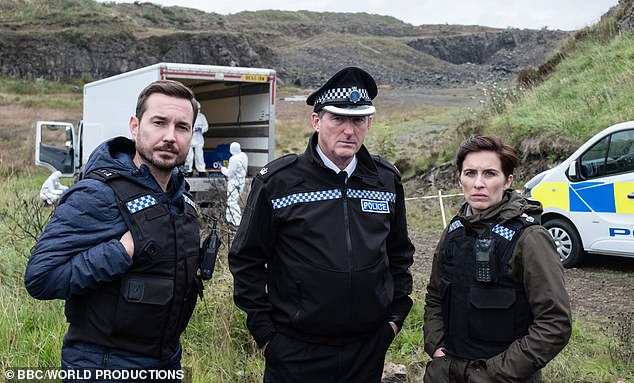 Steve, played by Martin Compston; Hastings, played by Adrian Dunbar; and Kate, played by Vicky McClure, are pictured above. Cressida Dick revealed she sat next to McClure at an awards evening and decided to watch the drama

Dame Cressida said she sat next to Line of Duty star Vicky McClure at an awards show and was inspired to give the drama a try.

Clearly unimpressed by both programmes, the police chief, 58, told the Radio Times: ‘I found myself sitting next to the lead actor [Vicky McClure] at an event and I thought she was quite interesting and so I thought, ‘I’d better watch a bit of this’.

‘But I was absolutely outraged by the level of casual and extreme corruption that was being portrayed as the way the police is in 2018-19.

‘It’s so far from that. The standards and the professionalism are so high. But I could see that it was good drama.’

But she admitted that she was far more irritated by the Bodyguard, which starred Richard Madden as an officer protecting the Home Secretary, played by Keeley Hawes.

‘It drove everybody round here absolutely up the wall!’ Dame Cressida said. 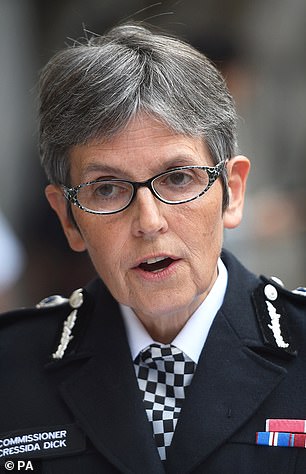 Met Police commissioner Dame Cressida Dick has revealed she was ‘outraged’ by the BBC’s Line of Duty, and even switched off the ‘ludicrous’ Bodyguard

‘I actually did have to switch it off after about 20 minutes – the moment when the Home Secretary made a pass at the Protection Officer was just beyond me, I’m afraid.

‘But both series actually make us look a bit cool and interesting – a net positive, probably. They bring in interest and applications. Even though it’s all completely ludicrous.’

In the programme, Miss Hawes’ character has passionate sex with her protection officer, played by James Bond hopeful Madden, in a hotel room.

She also explained that BBC One’s police documentary, The Met: Policing London, had also helped to increase recruitment to the service.

While her number one operational priority is to reduce violence, she explained she also wanted to increase public confidence in the police.

‘I do believe that the more people know, the better it is’, Dame Cressida said of having a documentary made.

‘So we’ve nothing to hide. These are good documentary-makers, and we get lots of interest from people as a consequence of it. People wanting to volunteer with us and get involved.’

Speaking about her home life, Dame Cressida revealed it was often difficult to talk to her partner Helen, who has now retired from the police force, due to operational privacy.

‘Actually, we did talk shop a bit,’ she admitted.

‘When we were both policing we had some pretty strong Chinese walls about what we did talk about. So when I was working in counter-terrorism, I never, ever would have dreamt of talking about something that was sensitive or secret. But the idea that in order to stay sane you never talk about the job… no. We found that on occasion it was quite handy to be able to say, ‘It’s been a tough old day’.’

Asked whether the couple plan to marry, she replied: ‘God! Ha! I don’t know.. Watch this space.’ 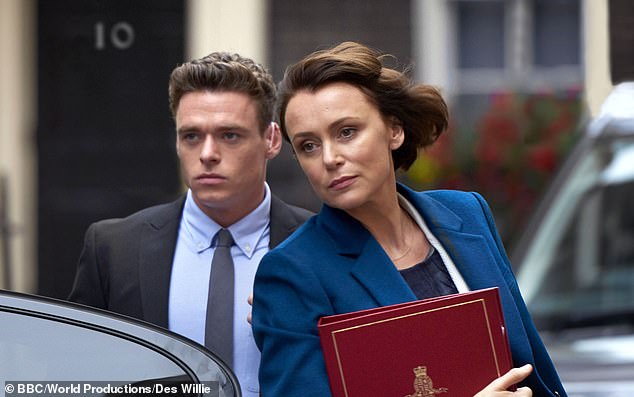 She admitted that she was far more irritated by the Bodyguard, which starred Richard Madden as an officer protecting the Home Secretary, played by Keeley Hawes, who are both pictured above