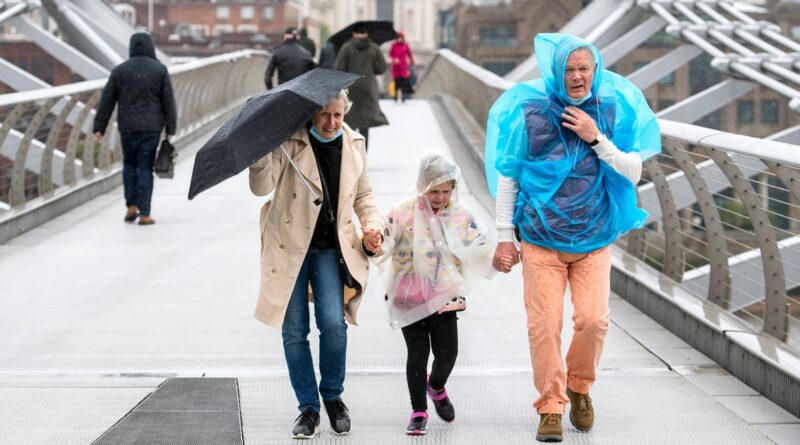 Brits will be drenched in severe downpours today, with millions likely affected by the rainstorms.

The Met Office has issued a yellow weather warning, which covers a large area of England, fully encompassing an enormous section stretching north to south.

The only places that will remain unaffected appear to be the southwest, Wales, and the very furthest areas in the west and east of England.

The alert, which begins at midday and is in place until midnight, will bring heavy showers to lash Brits and it may lead to flooding.

Public transport is likely to be disrupted and roads could shut as a large amount of rain is expected to fall in a short space of time.

The weather agency also warns there is a slight chance of power cuts and damages to homes and businesses affected by flooding.

To find out when the storm is set to arrive in various parts of the UK, read below.

When is the rain going to hit where you are?

Newcastle and Sunderland, fully covered in the yellow warning, will start the day with overcast skies. The rain will begin as early as 9am with the heavy showers falling from 10 am until 1pm.

In the afternoon, the sun will attempt to break cover but there is still a 30% chance of rain falling with this increasing to 40% later on in the evening. It's likely the rain will stop around 6pm onwards.

Areas such as York, Leeds, Sheffield, and Lincoln will wake up to clouds that will remain for most of the morning. Heavy rain is likely for two hours beginning around 11am until after lunchtime.

Expecting fewer downpours than further north, light showers will continue throughout the afternoon with outbreaks of sunshine. Dry skies, with more clouds, are expected from 6pm.

The very western parts are likely to escape the storms but Greater Manchester, the Peak District, and areas further away from the coast are at risk of rainfall today.

Greater Manchester will have a miserable start to the day with rain in the early hours, becoming heavier at 7 and 8am with 80% of downpours. There will be a break for lunchtime with dry conditions expected between 10am and 3pm before light showers return.

Those living in Birmingham, Nottingham, Northampton, Leicester, and Peterborough will follow a similar pattern as the northwest. Showers will start earlier, with a 50% chance of rain from 6am until 9am.

Fortunately, the sun will attempt to shine through the clouds around lunchtime offering a break between the overcast skies. A relatively dry day compared to other areas of the UK with rain not predicted to return for the latter part of the day.

London on the other hand will have a wet and dreary Sunday to end the weekend, with the first spots of rain appearing at 10am and returning at lunchtime. The afternoon is expected to bring showers with a 50% chance of water falling for several hours.

It's forecast Greater London will see some rainfall most of the day until the weather alert ends at midnight, with further light showers in the evening.

Kent won't be able to escape the weather warning, with the storm approaching from midday and lingering until 8pm tonight. Brief spots of sunshine will peek through in the afternoon, however, light showers may combat the effects.

Even down to the coast of Brighton will experience showers, with a wet start, cloudy skies for the morning before rain hits in the afternoon.

Only the furthest parts of the east of England are set to escape the downpours, such as Norwich.

Essex will have a dry and grey morning before the rainfall begins at 3pm and remains for several hours until late in the evening, most likely 9pm.

For other areas in the east, there could be small breaks of sunshine in between the rain but its predicted showers will continue throughout the day.