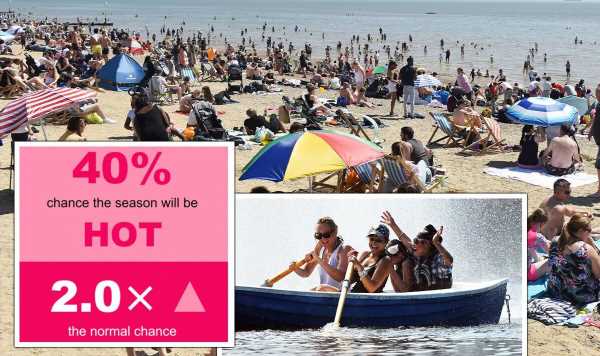 The UK faces a greater than normal risk of ‘impacts from heatwaves’ through the coming months, according to government meteorologists. The Met Office’s three-month summer outlook also claims the chances of ‘hot weather’ are double those of other years. It states: “There is an increase in the likelihood of warmer-than-average conditions in the month ahead.

“Predictions are consistent in suggesting an increase in the likelihood of temperatures being above average overall.

“While this doesn’t necessarily mean heatwaves will occur, it does increase the likelihood of heatwaves compared to normal.”

Independent forecasters agree the frosty spring interlude could be poised to give way to a major blast of heat.

Exacta Weather’s James Madden said: “There is now the potential for a major spell of warm weather to develop during the latter part of May or early June.”

Bookies are already slashing the odds on a seasonal scorcher with Coral offering 5-4 from 3-2 on this summer steaming into the record books.

Spokesman John Hill said: “The betting is pointing to a record hot summer this year in the UK.

“After what has been an unsettled couple of weeks, it is something to look forward to.”

Ladbrokes is offering 2-1 from 4-1 on this month turning out to be the hottest May ever.

Spokesman Alex Apati said: “We’re strapping in for a record-breaking month of sunshine ahead.”

It comes as cold air flooding in from the Arctic threatens gloomy skies, chilly temperatures and even snow through the next week.

As the UK falls in the firing line for a late Polar blast, weather models reveal the risk of frost or even a touch of snow.

High pressure responsible for the cold snap will continue to grip the UK through the first week of the month.

It means farmers and growers desperate for a deluge will be left high and dry with little rain in the forecast.

John Hammond, meteorologist for Weathertrending, said: “Through the early days of May, high pressure will maintain a barrier, meaning any wet weather will be sporadic and unreliable.

“Winds will also continue to be deflects, still coming from a cooler northerly source than some might like.

“Later in the week there is a chance we may well endure a fresh wave of Arctic air, raising the possibility of overnight frost, especially in northern areas.”

Forecasters agree rain will be in short supply through the next week at least despite the cloud.

Jim Dale, meteorologist for British Weather Services, said: “Once we are out of any rain from the weekend, we are back to being mostly drier than average.

“There may be a couple of cloudy days and a couple of warmer days, but apart from that, I see nothing in the outlook for the start of May that indicates much of a change.

“During the second week of May, there may be more in the way of rain which should make gardeners and growers happier.”

Met Office meteorologist Alex Deakin said: “Generally, it looks pretty cloudy on bank holiday Monday, and it’s hard to pin down where we will see any sunshine and there will be a few showers around.

“Temperatures will be on the way back up if we do see some sunshine.

“On Monday we are betwixt and between weather systems and it depends where you get the cloud or the sunshine as to the type of weather you will have on bank holiday Monday.”

However, Britons may soon be swapping rain coats for t-shirts and sun cream with warm weather predicted for early summer.

The Met Office outlook, which covers May to July, predicts only a 10-per-cent chance of the season being cooler than normal.