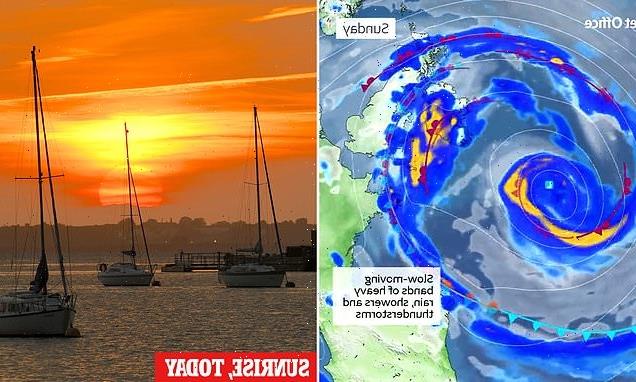 Prepare for the weekend washout: Met Office issues flood warnings with up to four inches of rain (but it will still be VERY humid with temperatures up to 79F)

Britons have been warned to prepare for a washout weekend with up to four inches of rain set to fall in 24 hours for some parts along with ‘hit and miss’ showers and thunderstorms for many other areas.

Conditions will continue to feel humid with highs in southern England of 27C (81F) today, 26C (79F) tomorrow and 23C (73F) on Sunday on what is the first weekend of meteorological autumn, which began yesterday.

The heaviest rain will be over South West Scotland and Northern Ireland where a weather warning is in place for all of tomorrow for up to 1.6in (40mm) to fall in two to three hours and up to 4in (100mm) in 24 hours. The Met Office warned that homes could be flooded, and ‘fast flowing or deep floodwater’ could cause a ‘danger to life’.

Showers over eastern England are likely to be ‘lively’ but there will be brighter spells either side of the rain and conditions will feel humid in the sunshine with temperatures into the low-20Cs (low-70Fs) in most places.

Today, early patches of mist and fog will soon clear and the day will then be mostly dry and bright with spells of sunshine but also a chance of showers – with more cloud and rain across Northern Ireland and western Scotland. 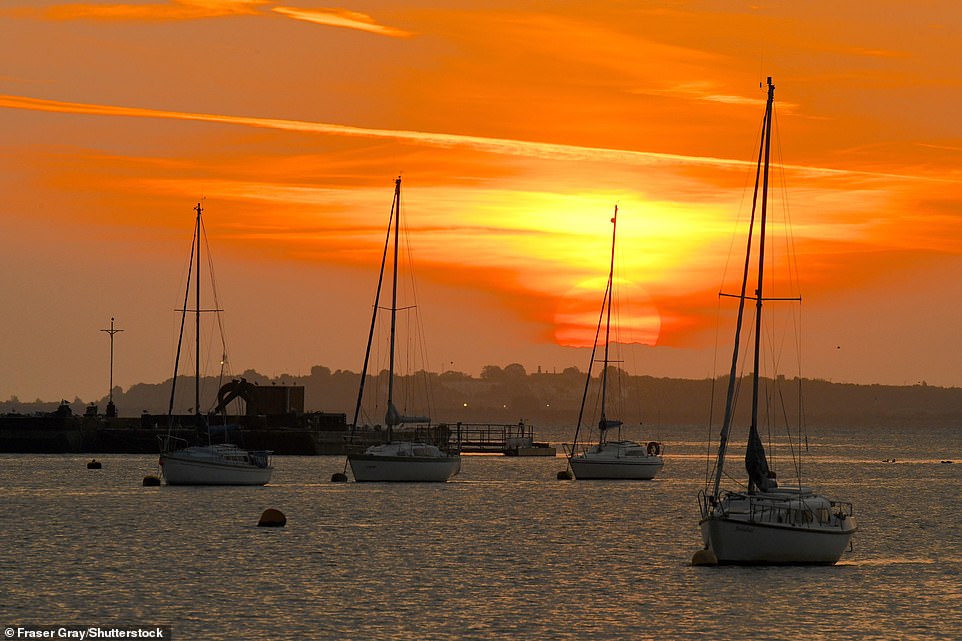 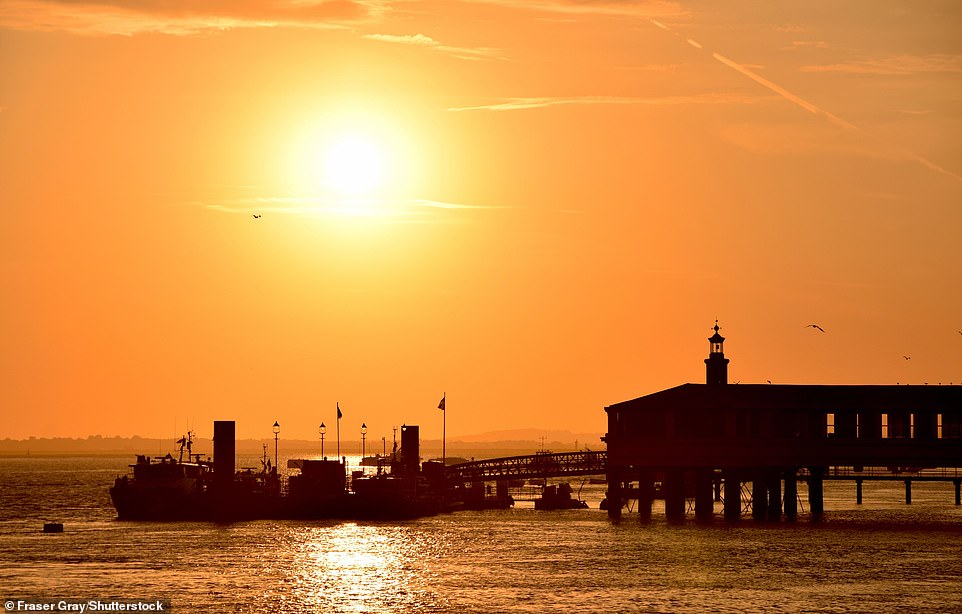 The sun rises today over the River Thames above Royal Terrace Pier in Gravesend, home of the Port of London Authority 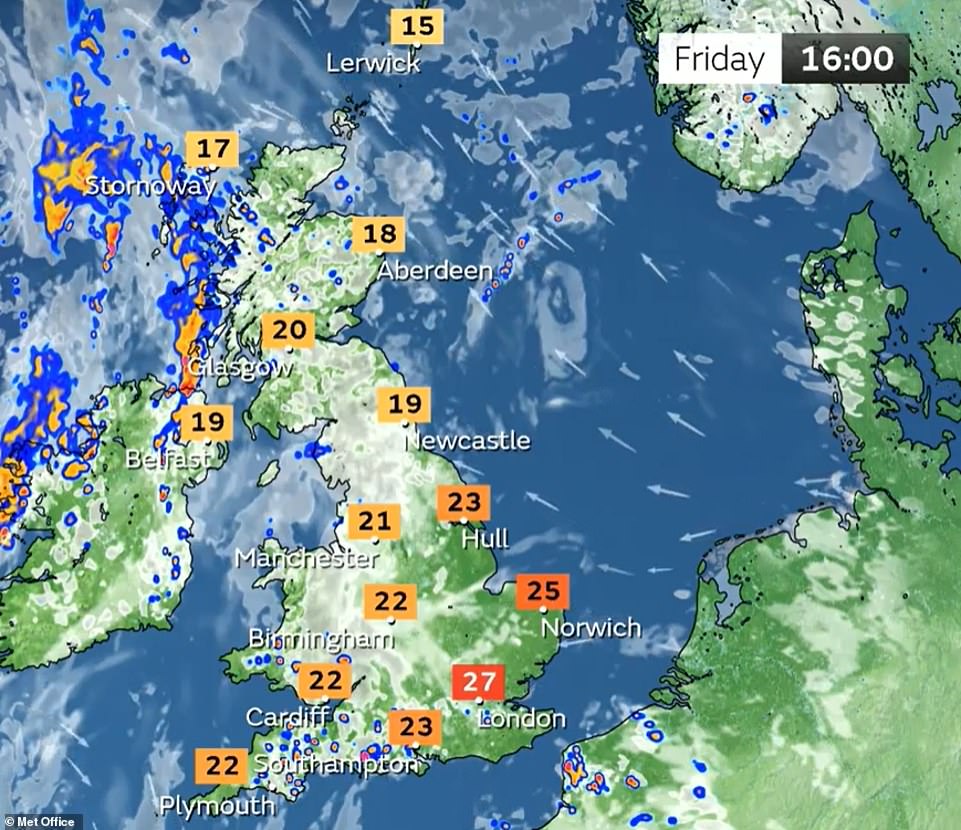 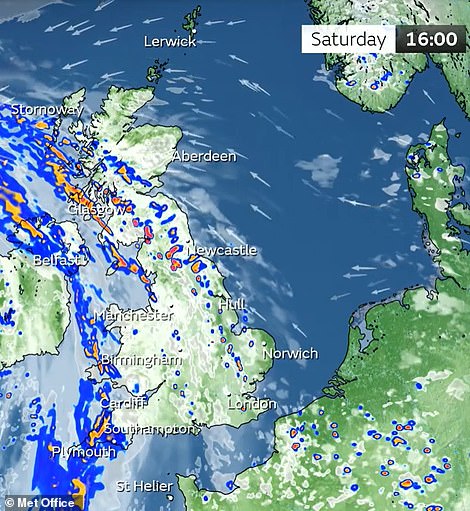 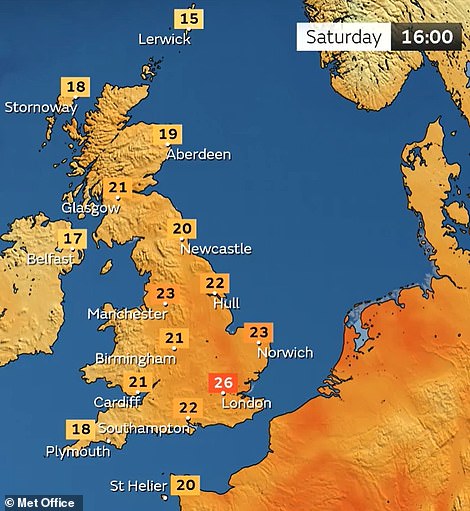 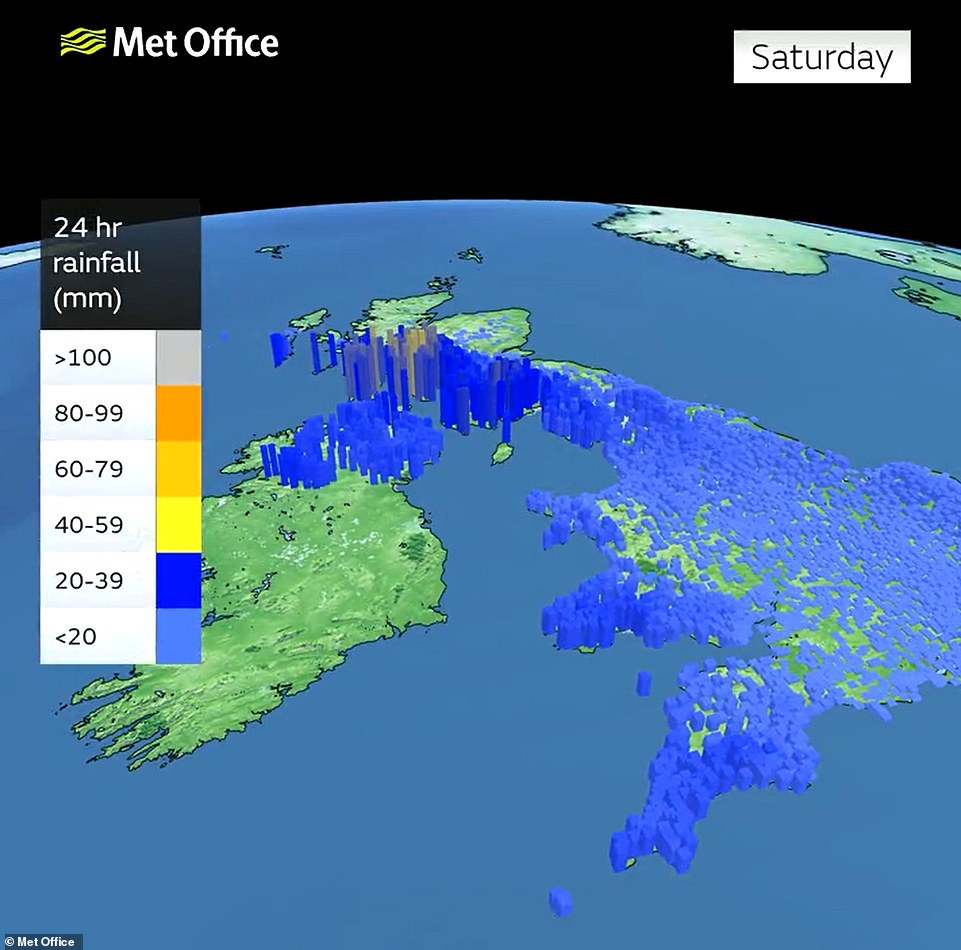 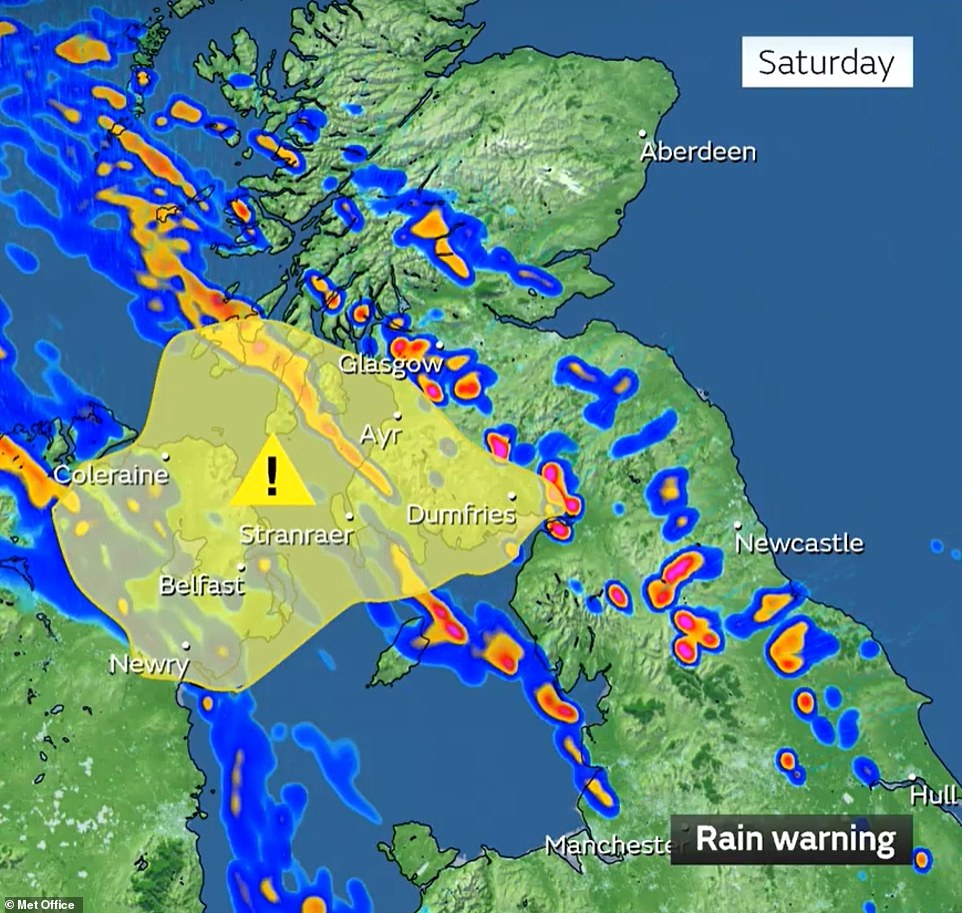 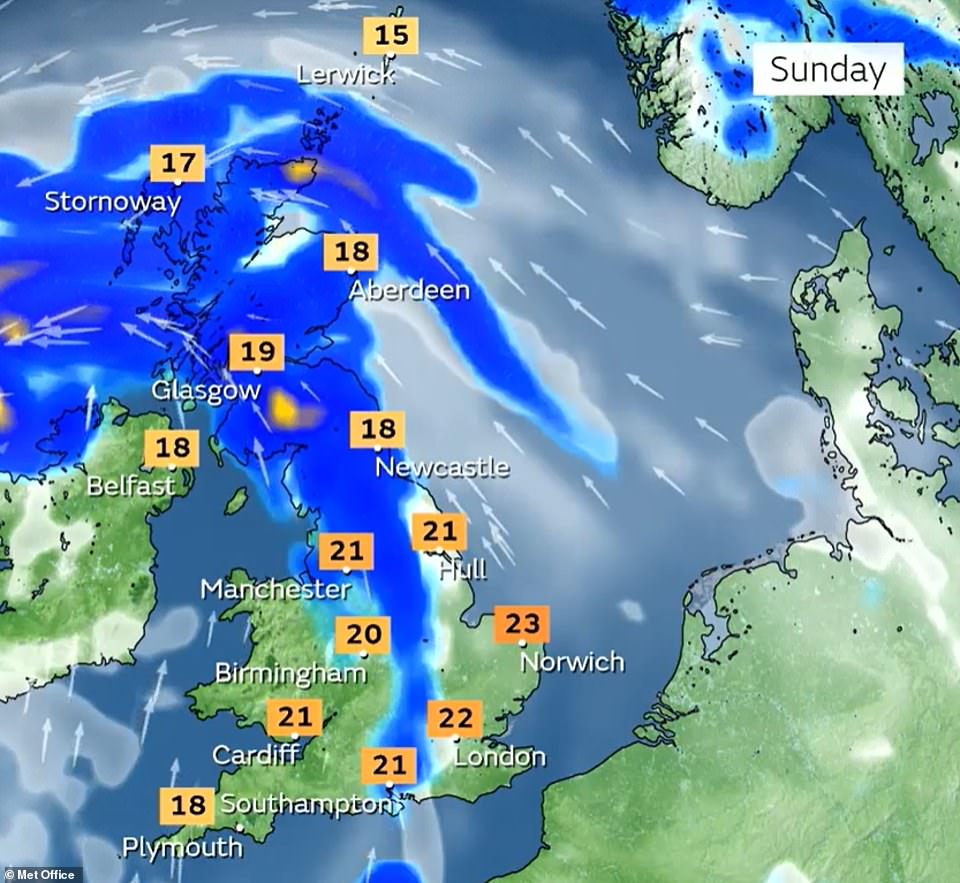 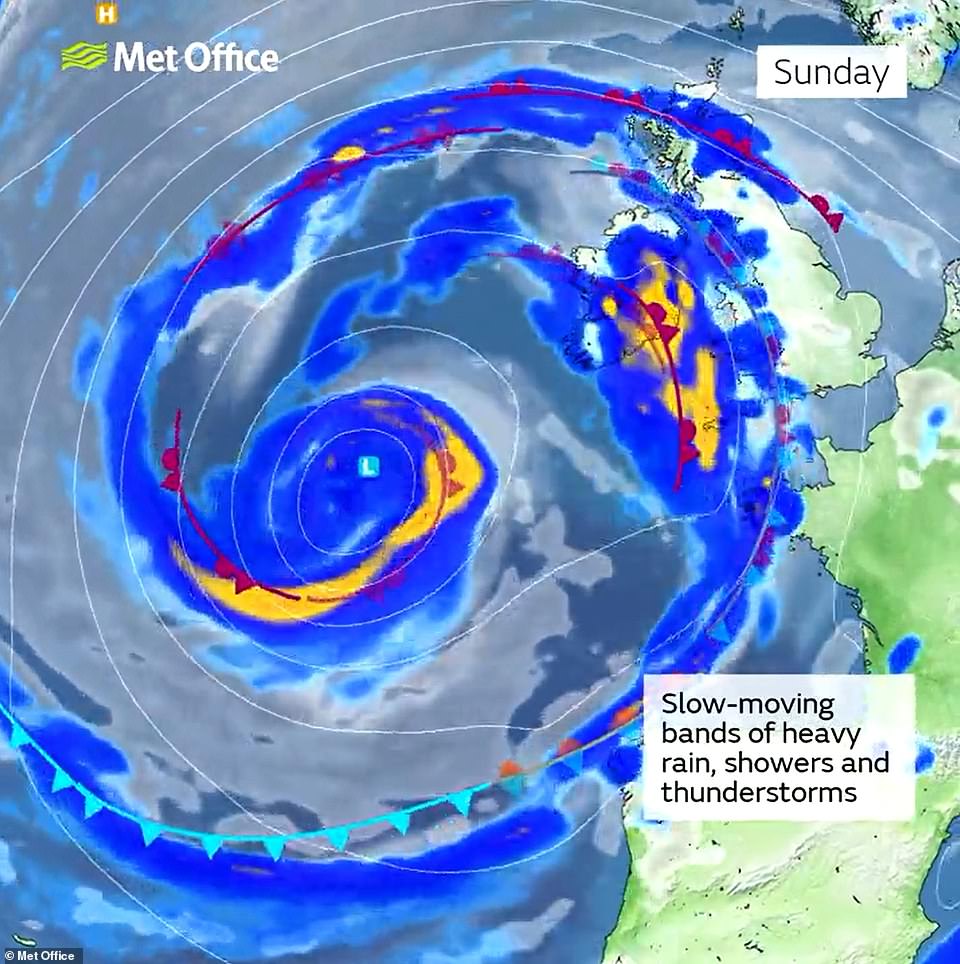 It will then be a mostly dry evening tonight with sunny spells but cloud will build into northern and western areas bringing scattered showers and spells of rain. Overnight showers will slowly spread eastwards and may be heavy.

Met Office meteorologist Alex Deakin said: ‘Whilst the summer has been dominated by high pressure, we are seeing big changes for this weekend. Low pressure will dominate through the weekend and into next week,

England has had its joint hottest summer on record, the Met Office said.

Provisional figures show the summer of 2022, covering June, July and August, had an average temperature of 17.1C, tying with 2018 to be the warmest in records stretching back to 1884.

It means that four of the five warmest summers on record for England have occurred since 2003, as the effect of human-induced climate change is felt on the country’s summer temperatures, the Met Office said.

The hot summer included the record-breaking heat in July, which saw temperatures climb above 40C for the first time in the UK.

Much of England has been gripped by drought after months of low rainfall, with the hot, dry conditions drying up rivers, damaging crops and fuelling wildfires that have destroyed homes and land.

‘Churning around this low pressure we’re going to see slow moving weather fronts that will be the focus for persistent rain, particularly over south-western parts of Scotland and Northern Ireland on Saturday.

‘A few showers over parts of eastern England – they could be quite lively, some thunderstorms are possible, but they will be hit and miss here, so not to be relied upon if you are desperate for some rain.

‘Meanwhile there’ll be showery rain too for west Wales and a few showers over the Midlands. But it won’t rain everywhere all day.’

Temperatures tomorrow will be still quite warm and humid across the east with some sunshine, with mid-20Cs likely across the South East.

Mr Deakin said: ‘Most places in the low-20Cs, but if you’re stuck under that rain band across parts of northern Ireland, only 15C, 16C. Probably still feeling fairly humid, quite a fresh wind blowing over northern Scotland.’

He added that ‘gusty winds’ are also likely tomorrow and further slow-moving weather fronts into Sunday will be ‘bringing more persistent rain most likely over parts of the West and again quite a gusty wind here’.

Mr Deakin added: ‘Some more showers are likely over Scotland, this time perhaps drifting a little further north. but the detail of where those weather fronts are exactly lying, we’ll firm up on that over the next few days.

‘It won’t rain all weekend – again, there’ll be some brighter spells either side of those showers. The winds are coming up from the south, so although they’ll be quite gusty at time, they’ll continue to bring relatively warm air.

‘So when the sun pops out, again feeling quite humid with temperatures getting into the low 20Cs in most places. If you’re stuck under one of those rain bands though, we’re looking at high teens at best, and again feeling cooler where we have the gusty winds.’