The Met Office has issued yellow weather warnings for wind today as high and gusty winds are forecast to hit the UK this afternoon. The gusts of up to 70mph will be accompanied by heavy showery rain.

The warnings come into force at 12pm today, lasting until 8pm this evening.

The Met Office warns: “Conditions across the south of England will turn windier this afternoon and early evening.

“The windiest conditions will be in coastal areas where gales or severe gales are expected along with gusts of 50 to 60 mph for many and perhaps as high as 60 to 70 mph in a few spots.

“Parts of southwest England are likely to see the highest winds during early to mid-afternoon whilst peak winds over parts of southeast England will probably not be until later this afternoon and early evening. 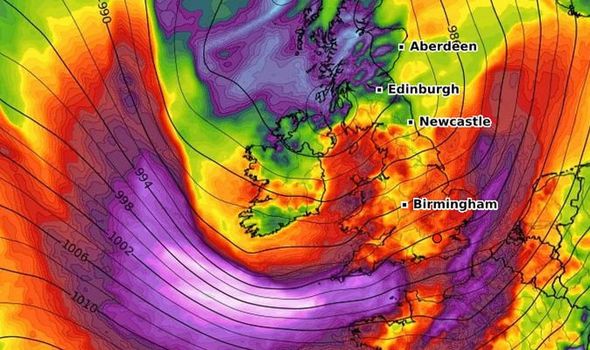 “Meanwhile, these high winds will be accompanied by further showers and spells of rain, heavy at times.”

The areas impacted by these weather warnings are: 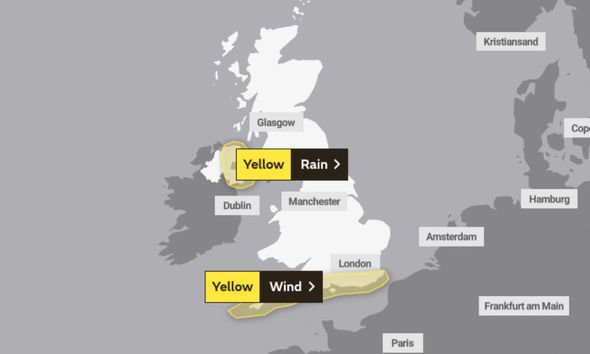 Met Office warnings for rain are also in place for Northern Ireland as the dreary weekend continues.

The warnings are for County Antrim, County Armagh, County Down, County Londonderry and County Tyrone.

Netweather forecasters have said much of the stormy weather today is “revolving around a depression to the West of Scotland.

“Gales will be severe in South and South West, where gusts in excess of 70mph are likely in exposed areas.

“Heavy rain in the South and South-East and this accompanied by a spring tide, will cause coastal flooding.