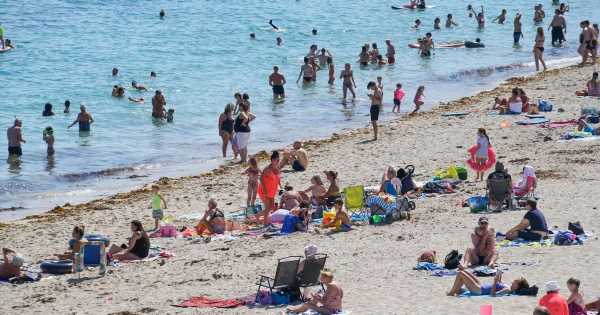 The Met Office has forecast that temperatures will likely be "above normal" across the country.

By Monday, the whole of the UK is expected to see sunshine following a cloudy weekend.

David Oliver, Met Office deputy chief meteorologist, said: “It is a different mix of weather this bank holiday weekend after what has been a largely settled week for the UK.

“The high-pressure that has been dominating the UK in recent days will move away to the south, allowing a low-pressure system to move in from the northwest."

Brits are set to enjoy a mix of springtime weather with some of the country bathing in near 20C temperatures, with cloud and wind in others."

The highest temperatures of the weekend are expected to be on Monday, where the mercury could hit 17C.

The low-pressure system will introduce clouds and outbreaks of rain for much of Scotland and Northern Ireland, with some blustery winds in exposed coastal areas.

By Tuesday, forecasters expect it to be cloudy in the north and northwest, with some rain at times, reports the Met Office.

For rest of May the mercury could drop as low as -3C with the Met Office predicting "chilly" nights and turbulent weather conditions as we head into summer.

WX charts show heavy rainfall is forecast will hit most of the country for the start of the new month.

Parts of Britain could be plunged into sub-zero temperatures as early as next week, mere days after being blessed with scorching temperatures.

A new weather map from independent forecaster WXCharts shows a shock return to snowy scenes that could be on the horizon, thanks to Arctic winds blowing in from the north.

According to the weather forecast model, things may be going from one extreme to another with an Arctic weather front moving across the country within two weeks.