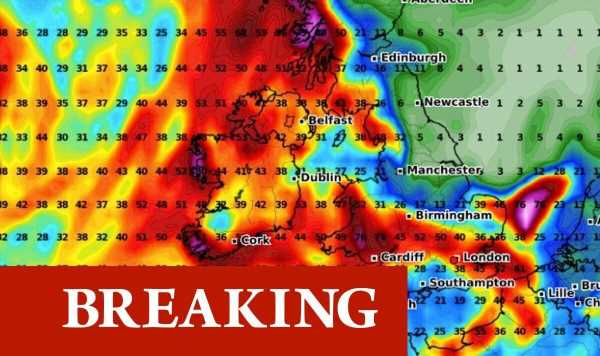 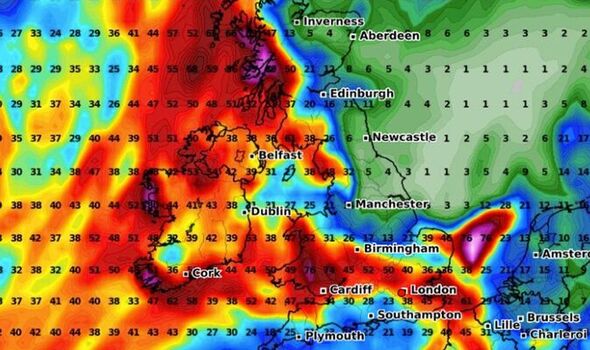 The forecasters said that while many places will start dry, “thunderstorms will bring heavy rain and lightning to some places early on Saturday”. It has put the yellow weather warning in place from midnight tonight to 10am tomorrow.

The meteorologist said there was a possibility that thunderstorms will move northwards into the southern counties early on Saturday morning, before easing off.

It said: “Many places will miss the worst of them, but where they do occur frequent lightning and heavy rain is possible.”

It suggested that some parts of the UK could see as much as 30mm of rain in an hour, with a “small chance” of 50mm within three hours near the south coast.

The Met Office explained that the warning meant there was a slight probability that homes or businesses could be flooded, “with damage to some buildings from floodwater, lightning strikes, hail or strong winds”.

There is also a chance of delays and cancellations to public transport, and the spray kicked up from the heavy rains could make for “difficult driving conditions and some road closures”.

It also said: “There is a slight chance that power cuts could occur and other services to some homes and businesses could be lost.”

There are concerns that poor weather conditions could be made more accute by the fact that the Platinum Jubilee weekend, a bank holiday, coincides with schools’ half term break, meaning there are likely to be many more people attempting to travel over the weekend.

Rod Dennis, RAC’s traffic spokesperson, said yesterday (Thursday): “The fact the bank holidays coincide with the end of half-term in many places has the potential to put some extra pressure on the road network, so planning a journey carefully is important to beat the worst of any queues.

“The best way for drivers to avoid breaking down this week is to check over their vehicles before setting out – yet our research shows less than a fifth do this routinely.

“Making sure oil, coolant and screenwash are all at the right levels takes just minutes, as does ensuring tyres are free of damage and are inflated properly. A bit of TLC now could make the difference between a straightforward trip and one beset by a breakdown.”

Similarly, the RNLI said that it wanted people to be able to enjoy their time at the beaches, but was expecting it to get “incredibly busy at the coast” and wanted “to make sure people stay safe and know what to do in an emergency”.

While the thundery conditions are expected to largely clear up by mid-morning on Saturday, forecasters are predicting more rain to dampen the spirits of Jubilee street-partiers.

A band of rain pushing up from the English Channel promises to bring wet weather across the final two days of the bank holiday weekend.

However, this is expected only to reach as far as Yorkshire.

Rebekah Sherwin, deputy chief meteorologist at the Met Office, commented: “There remains some uncertainty on how far north it will stretch but southern areas are likely to see a spell of showers on Saturday and Sunday, which could turn heavy and thundery at times.

“However, there will also be some breaks in the cloud even here, and northern areas are most likely to stay fine and dry.”

She added: “Northern Ireland, Scotland and northern England look like they’ll see the driest conditions from Saturday onwards, most likely enjoying some prolonged periods of sunshine.”

The Met Office also said there was “still a good deal of uncertainty” about the weather beyond today, meaning the worst of the rain could miss those making the most of the Jubilee.

Events set to be put on to mark 70 years of the Queen’s reign could be hampered by the inclement weather.

A Red Arrows display is due to take place on both Saturday and Sunday at the English Riviera Show in Torbay, on the Devon coastline.

On Saturday evening, acts including Queen, Duran Duran and Elbow are due to take to the stage outside Buckingham Palace for an open-air Jubilee concert.

However, heavy rain failed to stop an estimated million people flocking to the banks of the River Thames in 2012, to watch a thousand-boat royal flotilla.