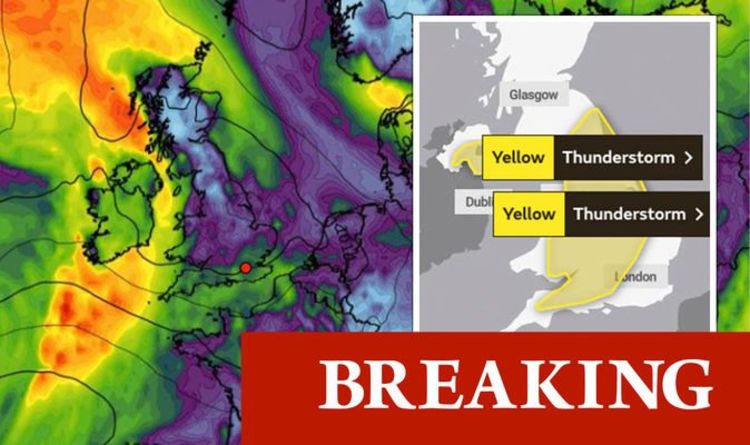 The Met Office has issued several weather warnings across Britain for Saturday. The weather warnings for thunderstorms are expected to hit a large proportion of the country over the weekend with more than 1.5 inches of rainfall expected in some areas in just a couple of hours.

The thunderstorm warning from the forecaster is in force from 12pm until 10pm on Saturday.

According to the warning, many places will miss the worst of the weather.

But heavy showers and thunderstorms are anticipated which could cause transport disruption and perhaps flooding.

There is a good chance driving conditions will be affected by spray, standing water and/or hail, leading to longer journey times by car and bus, with delays to train services also possible.

Some short term loss of power and other services is possible, with possible damage due to lightning strikes.

Flooding of a few homes and businesses could occur in some regions.

The Met Office warning for thunderstorms reads: “Following rain overnight and during the morning, heavier showers and thunderstorms are likely to break out by late morning.

“These becoming more widespread into the afternoon, with torrential downpours possible in a few places, bringing around 0.8 inches (20mm) of rain in less than an hour and 1.2 to 1.6 inches (30mm to 40mm) in a couple of hours.

“Lightning and hail may prove additional hazards in some locations.”

The Met Office weather forecast for the UK reveals conditions will be fine and warm at the beginning of the day on Saturday in the southeast.

However, wet weather will impact some western areas with these condtions edging eastwards.

Conditions will be slightly brighter with sunny intervals in some regions with scattered thundery downpours following later in the day.

Rain radar maps show large portions of the country being covered by rainfall on Saturday.

The showers are expected to continue on Sunday – where they will be potentially heavy for a time.

Weather conditions will be much more settled into next week with temperatures reaching slightly below normal in the east and south.

Temperatures will be warm elsewhere however.

Bookmaker Coral has now made it odds on at 4/5 for the 2021 summer being the wettest on record in the UK.

The company is also offering 6/4 odds for August being a record wet month.

Coral spokesman John Hill said: “This summer has already been one of the wettest in recent memory and with more rain on the way, by the time it is up, it may be the wettest we have ever had.

“Rainfall has been forecast to arrive in many parts of the UK over the weekend and as a result, the odds suggest there is a strong chance this month will end as a record wet August.”