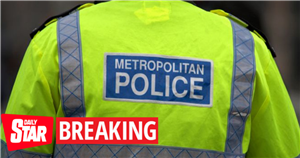 A Met Police officer has been charged with rape just days after Wayne Couzens was given a life sentence.

PC David Carrick, 46, was arrested on Saturday, October 2, and has since been charged by Hertfordshire Constabulary.

He was based within the Met's Parliamentary and Diplomatic Protection Command, but is now suspended.

Carrick is due to appear at Hatfield Remand Court in Hertfordshire tomorrow, October 4.

A police source said the officer was off-duty in Hertfordshire at the time of the alleged offence.

The case has been referred to the Independent Office for Police Conduct (IOPC).

Met Police Commissioner Cressida Dick said: "I am deeply concerned to hear the news today that an officer from the Met's Parliamentary and Diplomatic Protection Command has been arrested and now charged with this serious offence.

"I fully recognise the public will be very concerned too."

She added: "Criminal proceedings must now take their course so I am unable to comment any further at this stage."

It comes just three days after Sarah Everard's killer Wayne Couzens was jailed in a case that sparked public outrage.

Couzens, a Metropolitan Police officer, falsely arrested Ms Everard as she walked home in south London before raping and murdering her.