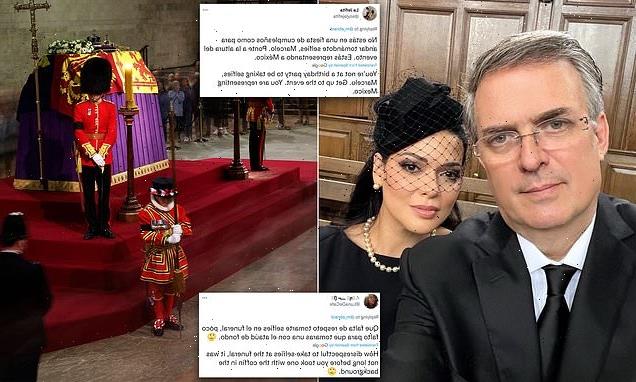 Mexico’s foreign minister is facing a wave of backlash after he shared a selfie of himself and his wife prior to Queen Elizabeth II’s funeral.

Marcelo Ebrard posed alongside his wife, Rosalinda Bueso, as the couple smiled before he uploaded the picture to his Twitter account Monday.

‘At the State Funeral of HM (Her Majesty) Queen Elizabeth II,’ wrote Ebrard before he joined other world leaders at St. George’s Chapel in Windsor, England.

His tweet was labeled as tasteless and a lack of respect towards the Queen, who died September 8 after 70 years as the head of the United Kingdom and other Commonwealth realms.

‘I find it disrespectful to take selfies at a funeral,’ one person tweeted. 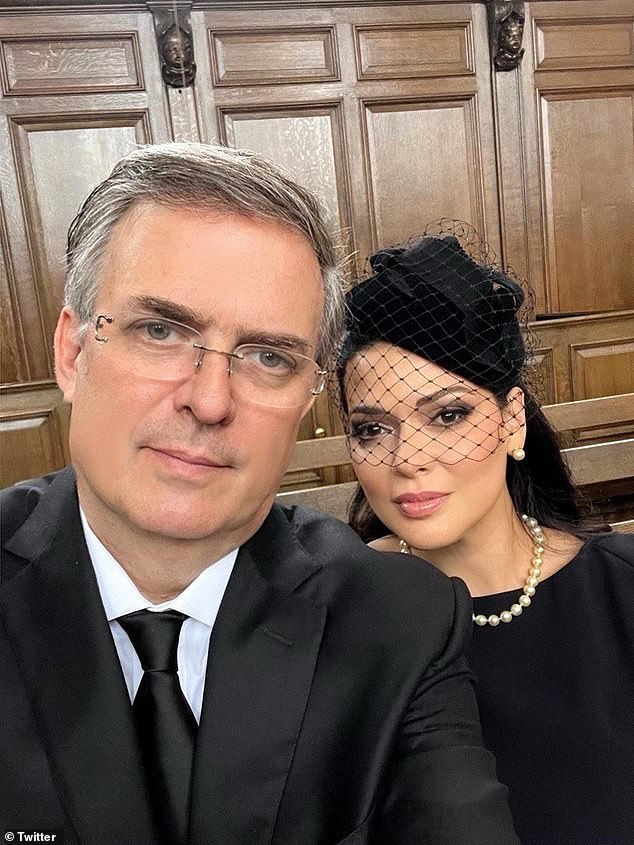 Mexico’s Foreign Minister Marcelo Ebrard was criticized Monday for taking a selfie with his wife, Rosalinda Bueso, and posting it on Twitter before attending Queen Elizabeth II’s state funeral Monday 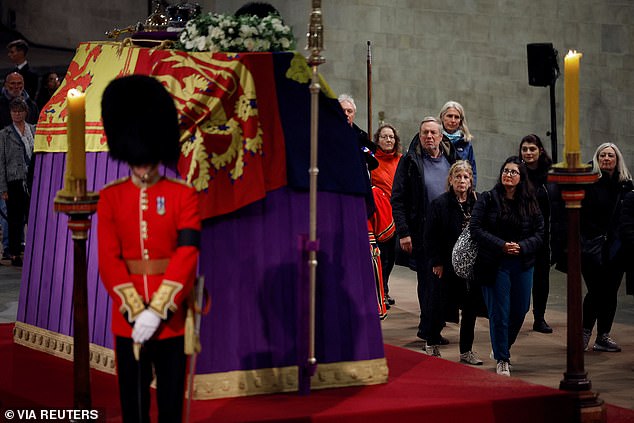 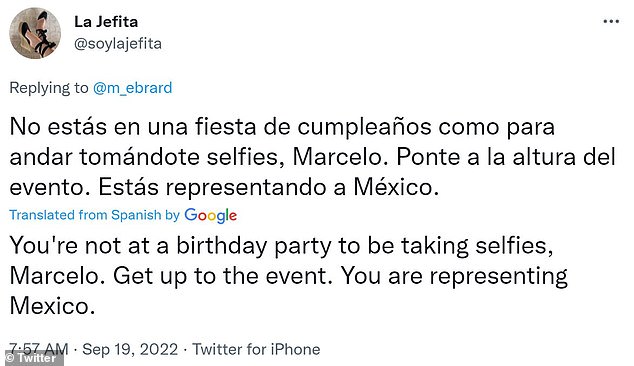 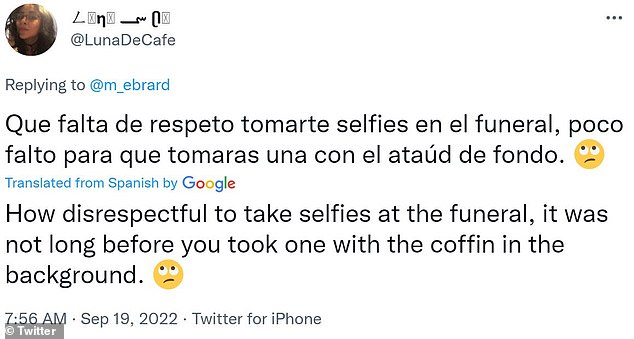 The foreign minister of Mexico, Mauricio Ebrard, was at the receiving end of non stop backlash after he uploaded a selfie of himself and his wife before the couple joined other world leaders at the state funeral for Queen Elizabeth II on Monday

Another user on the platform lashed out at Ebrard for not showing decency.

‘I find it disrespectful to take selfies at a funeral,’ the person wrote. ‘You’re not at a birthday party to be taking selfies, Marcelo. Act accordingly. You are representing Mexico.’

One follower equated Ebrard’s tweet to the behavior that some vacationers tend to display when visiting The Tower of London. 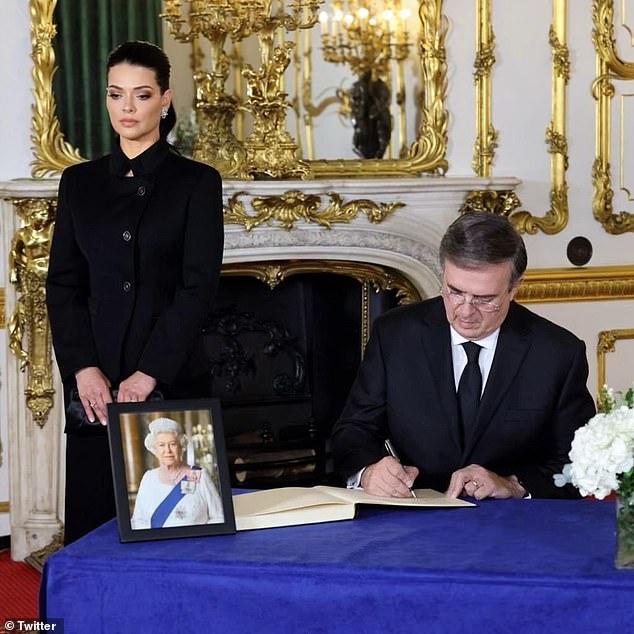 Marcelo Ebrard, the foreign minister of Mexico, signs a book of condolence for Queen Elizabeth II 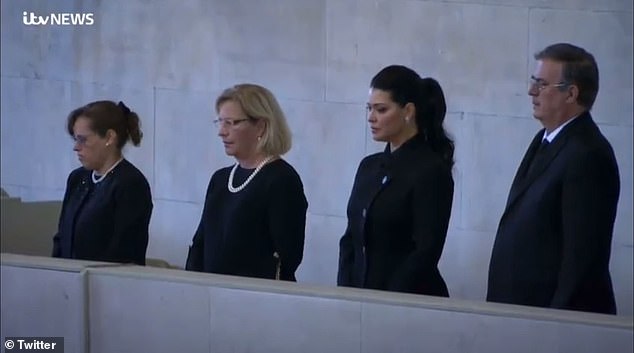 Mexico’s Foreign Minister Marcelo Ebrard (right) and his wife, Rosalinda Bueso (second to the right) attend a service for the late Queen Elizabeth II on Sunday

One of over 3,000 replies that blasted Mexico’s Foreign Minister Marcelo Ebrard for uploading a selfie of himself and his wife before the couple attended Queen Elizabeth II’s state funeral

The state funeral for Queen Elizabeth II is the first since Winston Churchill’s was filled with spectacle. Ahead of the service, a bell tolled 96 times – once a minute for each year of Queen Elizabeth II’s life. Then, 142 Royal Navy sailors used ropes to draw the gun carriage carrying her flag-draped coffin to Westminster Abbey before pallbearers bore it inside the church.

The trappings of state and monarchy abounded: The coffin was draped with the Royal Standard and atop it sat the Imperial State Crown, sparkling with almost 3,000 diamonds, and the sovereign’s orb and scepter.

There were also personal touches. The coffin was followed into the church by generations of Queen Elizabeth II’s descendants, including King Charles III, heir to the throne Prince William and nine-year-old George, who is second in line. On a wreath atop the coffin, a handwritten note read, ‘In loving and devoted memory,’ and was signed Charles R – for Rex, or king.

‘Here, where Queen Elizabeth was married and crowned, we gather from across the nation, from the Commonwealth, and from the nations of the world, to mourn our loss, to remember her long life of selfless service, and in sure confidence to commit her to the mercy of God our maker and redeemer,’ the dean of the medieval abbey, David Hoyle, told the mourners, as the funeral opened.

The service drew to a close with two minutes of silence observed across the United Kingdom, after which the attendees sang the national anthem, now titled ‘God Save the King.’

Archbishop of Canterbury Justin Welby said in his sermon at the funeral that ‘few leaders receive the outpouring of love we have seen’ for Elizabeth.

Later, during the committal ceremony in St. George’s Chapel on the grounds of Windsor Castle, the Imperial State Crown and the sovereign’s orb and scepter were removed from the coffin and placed on the altar – separating the queen from her crown for the last time. Her coffin was then lowered into the royal vault through an opening in the chapel’s floor.

She will later be laid to rest with her husband, Prince Philip, at a private family service.