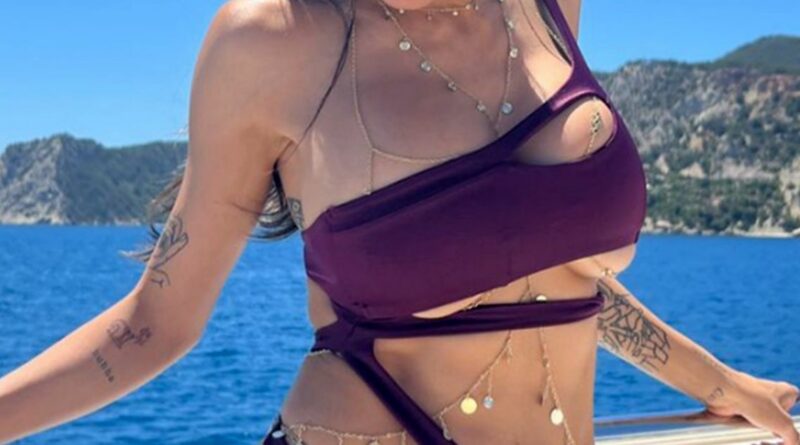 Mia Khalifa has teased her fans once again with a cheeky new post on her social media.

Mia is currently on a European trip with her boyfriend, Puerto Rican singer Jhay Cortez.

She has made the most of the opportunity by sharing a series of snaps over on her Instagram yesterday (June 29) where she can be seen wearing a skimpy mahogany-coloured bikini on a boat.

Boasting about her travels with her partner, she wrote: "You’re on your favorite artist’s boat, your favourite artist is on my boat. We are not the same."

While in Europe she Mia made sure to tick off all of the continent's top destinations, taking in Paris, London and now sunnier climes down south on the party island

The pair have been snapped in the last few days on a luxury boat journey, also spending time zooming about on jet skis and even doing a spot of scuba diving.

"Boat boy now," Khalifa said of her partner as they lounged on a yacht. She also grinned as he spun about in the water on one of the high-powered jet skis.

It comes after the model spent last week sharing with her 28 million Instagram followers clips of London's famous sights, on the first leg of her jaunt around Europe.

Having delighted her fans by announcing her arrival with a racy rooftop bikini photoshoot in front of the St. Pancras Renaissance Hotel, Mia swapped this for a more typical tourist itinerary later in her visit.

Cruising along the River Thames past the Houses of Parliament was followed by crossing Tower Bridge aboard the the top deck of a Big Bus London vehicle on Friday.

Mia has made no secret of her love for Great Britain from the stereotypical dialect to the football teams — some shirts of which she has proudly worn.

Her UK trip followed a sojourn in France for the well-travelled social media star.

Mia lives in Austin, Texas and is known to be friends with a number of famous people also living in the city, including controversial former cyclist Lance Armstrong.