EXCLUSIVE: Michael Jackson is ‘child-like’ with a ‘deep sense of peace’ in the afterlife 10 years after dying, DESPITE child molestation claims, says the Hollywood Medium

Michael Jackson is living a child-like existence in the after life undeterred by allegations of molestation.

That is the claim of TV psychic Tyler Henry who tells DailyMailTV, who insists he had contact with the King of Pop in death.

Henry, 23, revealed that he came in contact with Jackson while engaging in a reading with his sister La Toya Jackson on his E! show Hollywood Medium.

His insight comes ahead of the 10th anniversary of the death of the superstar, caused by an overdose of anesthetic Propofol in his LA mansion. 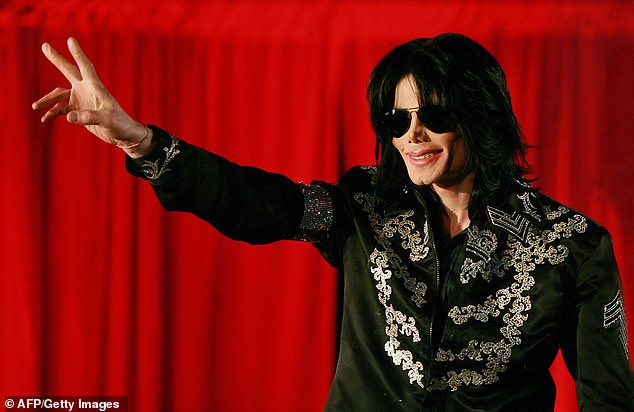 Hollywood Medium Tyler Henry tells DailyMailTV that Michael Jackson is still ‘child-like’ in the afterlife and has a ‘deep sense of peace’ despite the Leaving Neverland documentary, pictured month’s before his 2009 death 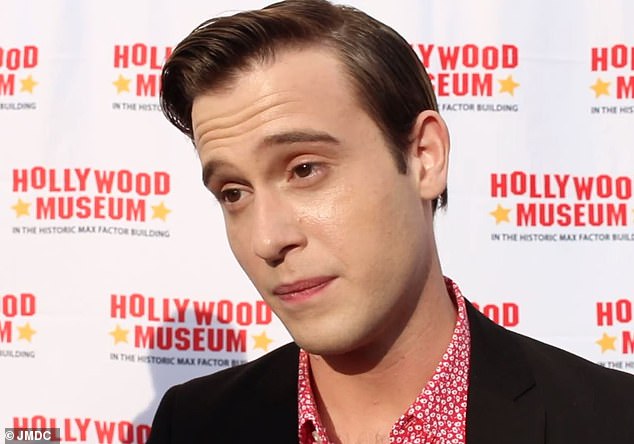 Henry, 23, had a reading with La Toya Jackson on his E! show Hollywood Medium with Tyler Henry in which her late brother Michael Jackson came through 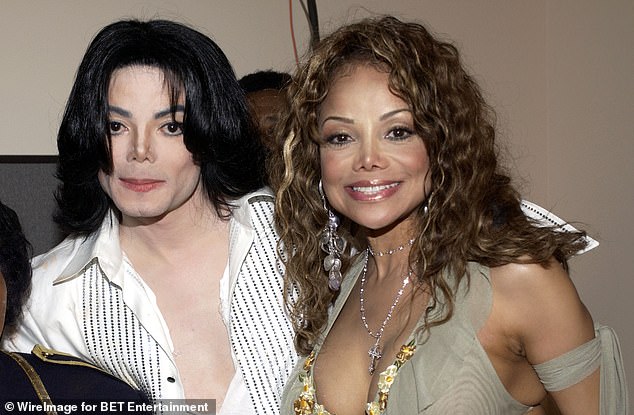 In the reading on E!’s Hollywood Medium, Henry says Micheal forgives sister La Toya for making public claims in the 90s that he molested children, pictured together years later in 2003

Henry revealed that Jackson told him that he forgave his sister La Toya for infamously speaking out against him for his alleged relations with young boys back in the 1990s.

Henry spoke to DailyMailTV as he walked the red carpet before being honored with the Hollywood Future Award at the Real To Real Awards at the Hollywood Museum.

‘When he came through, I just remember a deep sense of peace and it was really interesting. He came across as very childlike,’ he told DailyMailTV.

‘A lot of people think of Michael Jackson as moonwalking or with a fedora, but when he came through, it was much just like a child trying to connect and he really came across as any brother trying to connect with his sister, so it was just really an emotional special.’

Henry did the reading before the release of the HBO Leaving Neverland documentary in March, which interviewed men who claimed Jackson molested them as children.

However, Henry did touch on the subject of child abuse with the dead star and father-of-three during the reading. 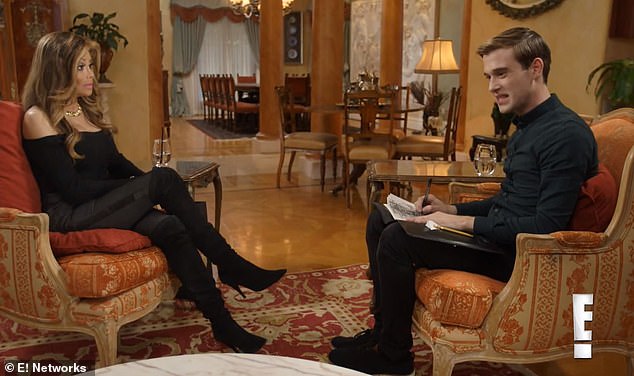 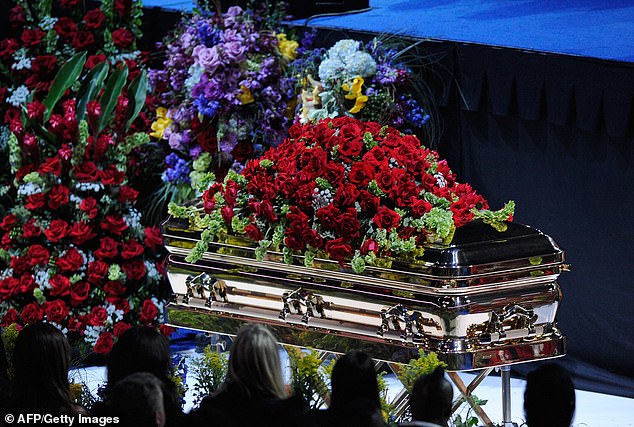 This comes ahead of the 10th anniversary of the death of the superstar, who died at age 50 of an overdose of anesthesia Propofol in his Los Angeles mansion, pictured is Michael Jackson’s casket at a public memorial service

In 1993 La Toya gave a press conference where she questioned her brother’s relations with young boys. But she later insisted that she was under the influence of her abusive husband Jack Gordon and apologized. 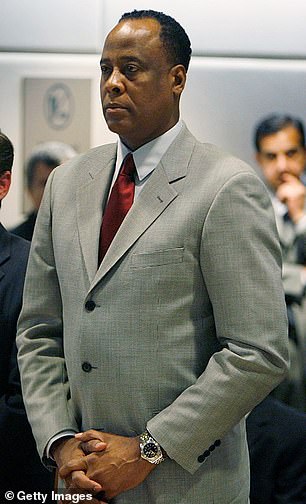 During his show Henry recalled how upset Jackson was about his medical treatment by Dr Conrad Murray who was convicted of involuntary manslaughter in the death of Michael Jackson, pictured on trial in 2010

Henry touched on whether her brother felt ‘any anger coming from his spirit.’

The 23-year-old said: ‘No, it was interesting. He actually communicated to La Toya in that reading that some of the comments she had made around the time that these allegations were brought forward might have been in jest, or she might have regretted and he communicated an understanding and forgiveness around some of what she said previously.

‘So it was actually really important for her to hear that and I think it might have been a precursor to what came later on, sadly.’

Henry met emotional La Toya Jackson for his show to learn about the final moments before her brother’s death.

During the show Henry recalled how upset Jackson was about his medical treatment by Dr Conrad Murray.

‘He’s acknowledging that he should not have been left alone at a time when he was left alone,’ Henry told La Toya on the show.

‘The person who should’ve been there to monitor wasn’t monitoring, and it’s like, ”I trusted you to be there. I trusted the role that you were supposed to have to help me and you left. And it’s like, Of all times, you should be right here.”’

Michael Jackson died in 2009 at age 50 from an overdose of drugs, the most significant of which was propofol, a powerful anesthetic he had been taking to treat his insomnia.

The lethal dose was administered by his personal physician, Dr Murray, who had left the room and returned to find Michael not breathing.

Henry recounted those final moments from Michael’s point of view. He says Michael felt a sinking realization that he needed emergency help, but nobody was present to assist.

‘I feel like when he was abandoned, that would have been an ideal time for him to try to reach 911, to try to call for help,’ Henry told La Toya. ‘At this time, he realized something was wrong while he was alone. And that’s when he was conscious and realizing something’s wrong here. But I just don’t feel like he had someone to say, ”Hey, I’m having a medical emergency, something’s happening.” 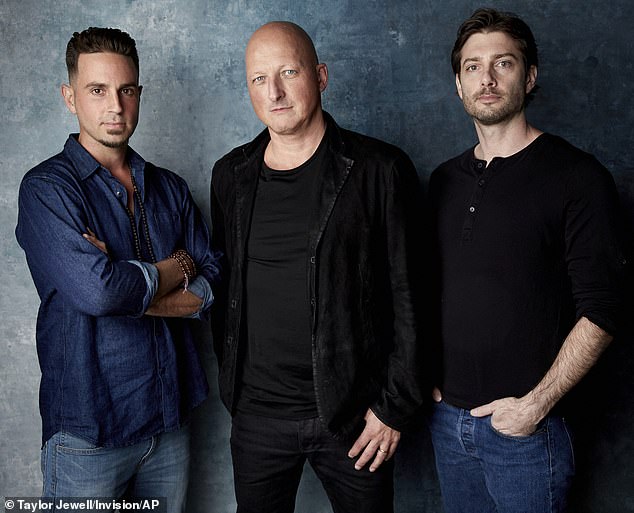 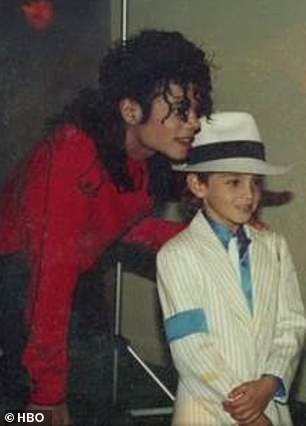 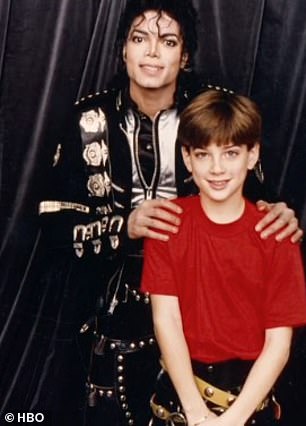 Michael Jackson with his two accusers when they were children: Wade Robson (left) and James Safechuck (right)

La Toya said: ‘I think what hurts more than anything else is that, not only was there a need for someone to be there for him, but there was a trusted person … a person that was in that inner circle, and that person wasn’t there.

‘And just to hear that, just really, it just tears you apart. I just wanted to just cry.’

La Toya said that during her hour-long meeting she was utterly convinced that he communicated with her brother.

‘These are things Tyler was telling me that nobody knows,’ she said.

The reality show personality added that his show means his daily life is unusual.

Many times people on the street try to get him to talk to their late family members or friends, he said.

‘It definitely may be a bit intense, especially when I’m at the supermarket just trying to get some chicken or some milk and someone is like, ”Oh my God. Can you contact my grandma?” So I definitely navigate that, but the goal is just to help people, so I understand the intensity.’

What to Read to Stay Informed Today: Minute-by-Minute in Washington
Celebrities News

Lea Michele’s Broadway Co-Star Calls Her ‘Nothing But A Nightmare’, Urges Her To ‘Actu
World News

Charges Upgraded Against Chauvin; 3 Other Officers Involved in George Floyd's Death to Be Charged: Report