Ready four class! Miracle quads are set to start school… a milestone their parents had only dared to dream of

Looking ever so smart in their uniforms, these quadruplets are ready and raring to start school next week.

But this is a milestone their parents had only dared to dream of.

In 2017, identical brothers Roman, Austin and Arlo and their sister Raeya were born at 29 weeks – 11 weeks premature.

The IVF babies weighed just two to three pounds and had to spend almost two months in hospital before they were allowed home. 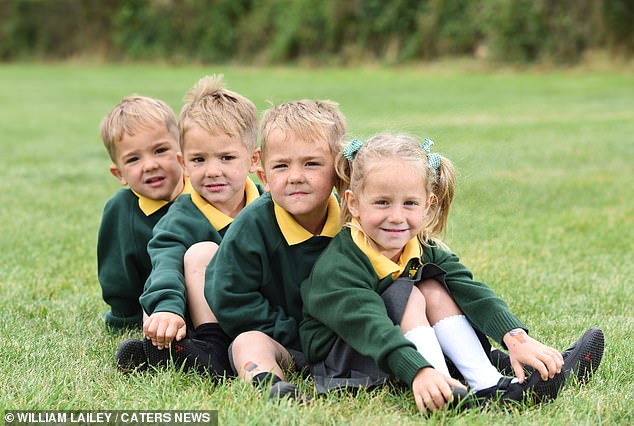 Identical brothers Roman, Austin and Arlo and their sister Raeya looked ever so smart in their uniforms ready to start school next week

Happy and healthy four years on, the siblings are ready to step out in their shiny new shoes and matching rucksacks, following in the footsteps of sister Myla, six.

And now the biggest worry for parents Selina and Kevin Torbett-Ashe is how to get their five children ready for school each morning.

Mrs Torbett-Ashe, 31, a nurse, said: ‘It seems like only five minutes ago we found out we were expecting four babies. I have loved having them at home.’

She added: ‘It will be madness in a morning, but it always is in this house… Thankfully they all secured a place at the same school and the class is only small so they will certainly take up a percentage. 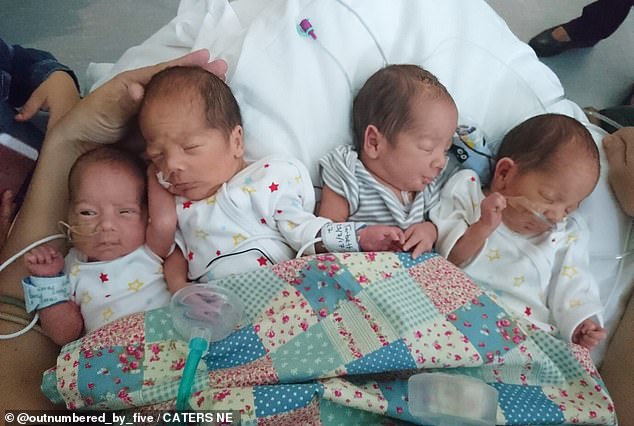 The IVF babies were born 11 weeks premature and weighed just two to three pounds. They had to spend almost two months in hospital before they were allowed home

‘They are all really excited to be going to Myla’s school, they are not worried at all, it’s their teachers I’m worried about.’

Mrs Torbett-Ashe, from Winchester, Hampshire, said she has spent £600 on uniforms alone and has so far bought 20 polo shirts, 15 pairs of trousers, eight jumpers, five skirts and four PE kits – and that’s only half of the list.

She said she had bought a puppy when the quads started nursery, adding: ‘Next week, I think I will just enjoy a hot cuppa and five minutes [of] peace and quiet.’