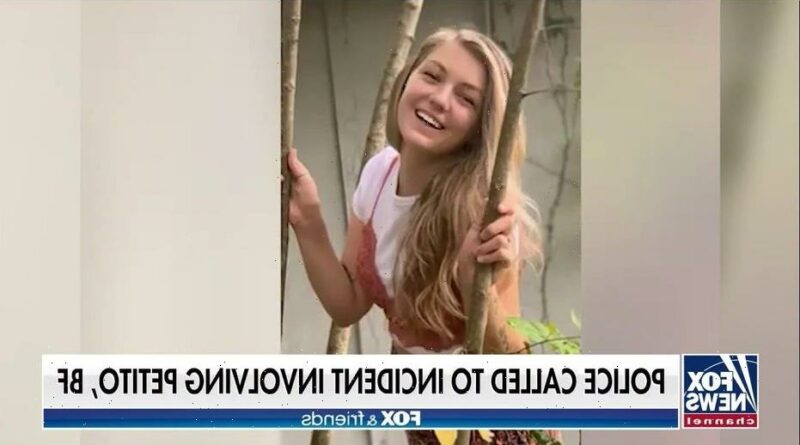 A series of haunting songs appeared on missing New York woman Gabby Petito’s Spotify on Sept. 1, a day after her mother last received text messages from her phone.

Many of the songs, collected on an account she appeared to share with her fiancé, Brian Laundrie, focus on love and heartache.

Another song, “Take My Hand,” is about picking up a stranger at a bar. “The Badger’s Wake” is about a badger decomposing underground.

Gabby Petito and Brian Laundrie began a cross-country road trip in early July, but Petito has been missing since late August.
(Joey Petito)

The four Berry songs appeared on the “Mtn tops” playlist on Sept. 1. A day before that, a new list emerged titled “Selfconsumption.”

Petito, 22, and Laundrie, 23, an engaged pair of hikers active on social media, were road tripping across the U.S. in a white Ford Transit van, which police have recovered as part of their investigation into her disappearance. The FBI began a forensic examination on the vehicle Tuesday, North Port police told Fox News.

She was last seen in late August at Grand Teton National Park in Wyoming, according to police, and she was reported missing over the weekend after her parents hadn’t heard from her in a week.

The two had been involved in some kind of incident on Aug. 12 in Moab Utah, according to the police chief there, but responding officers did not find evidence of a crime.

He returned to Florida in her van without her and has not publicly explained why – prompting her parents to plead for him to explain where he last saw her.

“The Schmidt and Petito family implore Brian to come forward and at least tell us if we are looking in the right area,” her parents said in a joint statement Tuesday night.

Laundrie has not been charged with a crime or accused of playing a role in Petito’s disappearance. Police in North Port, Fla., called the case “odd” and said they wanted to speak with Laundrie.

“I think anyone would assume that the possible last person to be around her is a person of interest to want to talk with,” a North Port police spokesman told Fox News Tuesday. “However, there is no crime at this point.”

In a statement Tuesday, Laundrie’s attorney Steven Bertolino said his client’s family hoped that Petito would be found and reunited with her parents. He did not respond to repeated questions about whether the couple had broken up.

Authorities described the missing Petito as White and about 5 feet, 5 inches tall, weighing around 110 pounds. She has blonde hair and blue eyes, and several tattoos, including one on her finger and one on her forearm that reads “let it be.”

Petito and Laundrie started their trip on July 2, and the missing woman’s mother said during a Monday news conference that they had regularly been in contact until the last week of August.

“The last text I got from her was on Aug. 30,” Petito’s mother, Nichole Schmidt, said. “I don’t know if that was her texting me or not.”

On Aug. 19, the couple posted an eight-minute video about their cross country trip to their YouTube account, sightseeing at landmarks and beaches, camping, playing games and smiling in an idyllic montage that appeared mostly recorded on the West Coast.