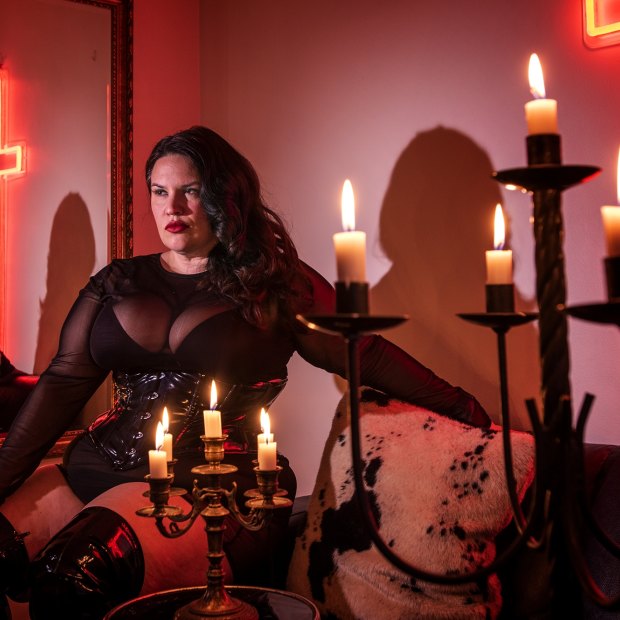 There’s more to Mistress Lucilla than her tight corset, high-heeled boots and riding crop. There’s also her master’s degree in psychology, the book she’s writing and her intricate understanding of society.

When I ask her about the large neon crucifix on her wall, she responds, “it’s a place of worship isn’t it?” And, she’s right. Some people worship her for the things she can do.

Even though sex work has been decriminalised since 1995 in NSW, the sex industry still operates largely behind closed doors, and is spoken about in whispers. That is, of course, unless you speak to the people who work in it.

“You often get the question of ‘why do you do this? Are you being coerced into it? Or ‘how can I save you?’,” Mistress Lucilla said.

“I don’t need saving. I am here to save you, really. I don’t do this for the money. It’s about how many positive life experiences can I offer somebody.”

More people have started to dip their toes in the bondage waters, says Mistress Lucilla, taking the opportunity post-lockdowns to try something new or explore sexual fantasies.

“I’m seeing a wave of what I am calling ‘the bucket listers’. People wanting to try it once, see what it’s like and most likely never do it again.”

The pandemic has had a diverse effect on how the sex industry operates, and with inflation and interest rates on the rise, Mistress Lucilla said that sex is one of the first industries to feel the pinch. 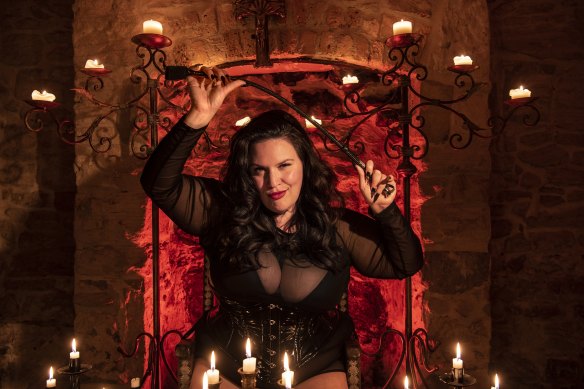 Just like any other business, there are peaks and troughs when it comes to demand.

Despite the popularity of her bridles and gags around Melbourne Cup time, Mistress Lucilla said that the racing carnival marks the start of people taking their money elsewhere.

“From Melbourne Cup day, it starts to get really quiet because everyone’s transitioning to party season.”

“And then Christmas parties start, and everyone starts preparing for holidays … so client money will be going to Christmas presents, holidays, and then kids go back to school and people have to pay their credit card bills. So normally, about November through to about the end of February it gets very patchy.”

Jess and Lawrence, owners of swingers club Our Secret Spot in Annandale, had a similar experience to Mistress Lucilla, in that the pandemic sparked a stampede of people who wanted to spice up their sex lives. 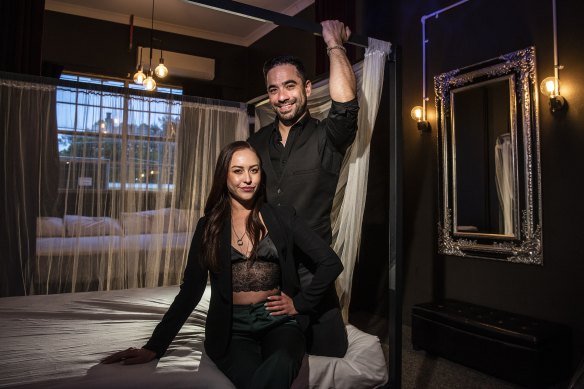 Jess and Lawrence said that their swingers club in Annandale has been thriving since the end of lockdowns.Credit:Steven Siewert

“Week to week, our numbers have been growing, to the point where we’re sold out almost every weekend. There has barely been a weekend since the end of the last lockdown that we haven’t been sold out,” Lawrence said.

The two decided to be open about their business after their first few years in the industry to help dismantle the stigmas around sex.

“We want to normalise the fact that being more sexually active doesn’t make you dirty or grotty, or that there’s something wrong with you because you want to have sex with other people,” Jess said.

Some parts of the industry have been popularised by books and movies such as 50 Shades of Grey, but judgment still lingers when it comes to brothels.

That’s largely due to human trafficking syndicates that are still running rife throughout parts of Australia. An investigation by this masthead revealed instances of visa farms that engage in wholesale rorting of visas and brothels where women had their passports removed and were directed to perform extreme and degrading services.

“As long as there will be tight borders, wealth disparities and inequalities within and among countries, there will be fertile grounds for migrant labour exploitation, including in a decriminalised sex industry,” Macioti said.

Australia “shows comparatively much lower rates of trafficking in the sex industry”, said Macioti, compared to other Western countries, and that over the past 10 years, trafficking had declined. To stamp out exploitation, Macioti said more conversations need to be had with sex workers so that they know their rights, and that more work needs to be done to work towards Australia-wide decriminalisation.

“Make the sex industry a regulated workplace like other workplaces, increase work rights to migrants, visibility and health and safety at work and information sharing about health and rights,” Macioti said.

“Only rights will stop wrongs.”

Julie Bates, who was made an officer of the Order of Australia (AO) for her “distinguished service to community health” and has been working with brothel owners for decades, said one of the most pressing issues for sex workers is local government pushing brothels into industrial areas, creating environments where women often feel uncomfortable. 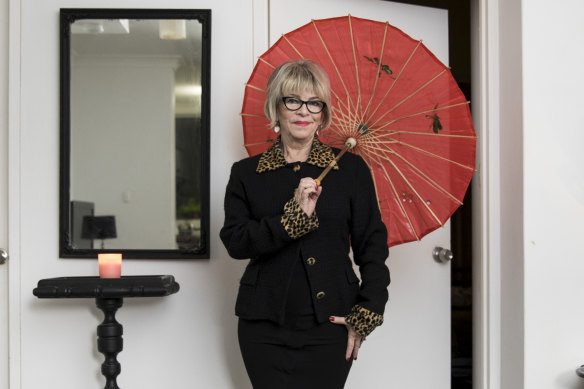 Julie Bates AO says that the sex industry in Australia has come a long way, but there’s still some unfinished business. The red umbrella has become the international symbol of sex worker rights.Credit:Dominic Lorrimer

She says that brothels don’t belong “out in the boondocks around smash repair yards,” because it “is a most unsuitable and dangerous place for a mostly female workforce to be. Once the sun sets, everybody goes home … There are no trains, no transport, and the clients are scared too.”

As the industry continues to shed stigmas around sex work and workers, it allows services to become more accessible to people who have previously had difficulty accessing premises and finding sex workers.

Rachel Wotton, an academic, sex worker and activist, has been working for more than 20 years to increase the rights of sex workers, as well as the sexual rights for people with disability to access sex worker services if they choose.

Her PhD research is on exploring the experiences of people with disability who access sex work services in Australia.

“Third-party support and support workers can either be the best advocates or the worst gatekeepers,” said Wotton.

Although a lot of progress has been made in dismantling stigmas around sex work and those who access it, Wotton said that there is still a long way to go.

“Things that need to change include … More positive media outlining sex work as real work and for people to stop demonising clients.”

And also, “allow sex workers from other countries to get work visas equal to other occupations and industries”.

Put simply, allow them to work, pay their bills and provide for their families equal to any other occupation. Because, at the end of the day, they’re just doing their job.