Molly Shannon wasn’t afraid to throw herself onto a pile of metal chairs on “Saturday Night Live” as the overzealous Catholic school girl Mary Katherine Gallagher, who longed to be a "superstar." In real life Shannon’s not afraid of being earnest, either.

“I feel like it's almost more exhausting to have to be ‘on’ all the time, like doing talk shows where you have to tell these funny anecdotes,” Shannon says in an interview promoting her new book, “Hello, Molly!” (Ecco, 304 pp., out now).

“I like being serious and real. As my friend John C. Reilly says, 'You can be deadly serious,'" Shannon says. "I think some comedians push people away, but I don't like that. I like to feel close and connect with people and share stuff to connect.”

“Hello, Molly!" opens with a car crash in the summer of 1969 that claimed the lives of Shannon's mom, Peggy Keating, her 25-year-old cousin Fran and 3-year-old sister Katie. Shannon was just 4 at the time. Her father, Jim Shannon, who had been drinking at the day's fête in honor of a family member's high school graduation, was driving the two hours home. "There is no way to know exactly what happened that night though my gut tells me he fell asleep at the wheel," writes Shannon, now 57. "But would he have fallen asleep without the drinking? It still keeps me up at night sometimes but, in the end, all that is relevant is that it changed our lives forever."

'I couldn't be happier': Molly Shannon is having a moment with 'The Other Two,' 'White Lotus' 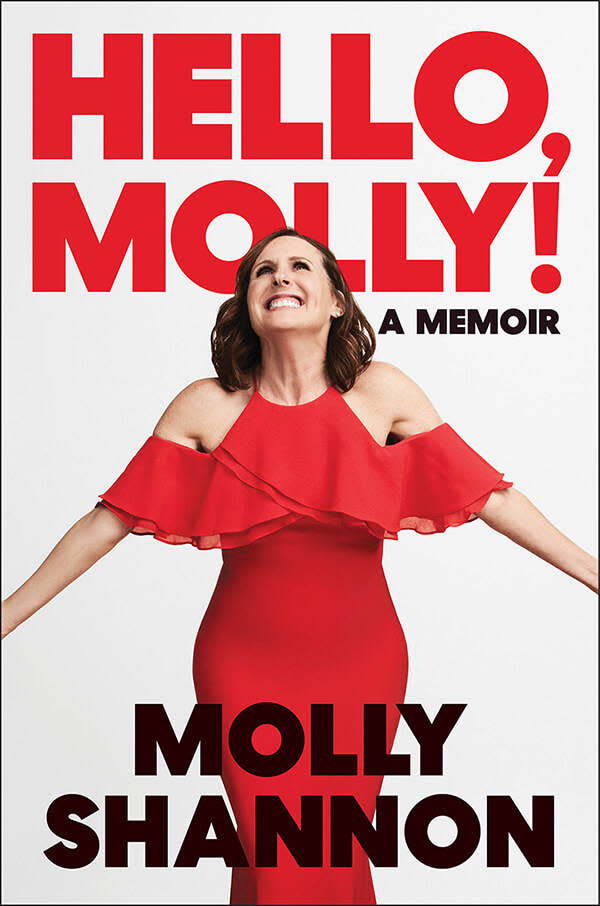 Shannon tells USA TODAY writing the book made her "dig deep." She looked at the site of the crash on Google Maps for the first time. "I just never wanted to think about that," she says. "People go, 'Oh, was (writing the memoir) cathartic?' And I'm like, 'No, I'd already processed so much of that stuff in therapy.' But then, in all honesty, yes, that was cathartic! I never knew that my dad had driven for 90 minutes, and we were 18 minutes from home. That was heartbreaking, to discover that."

In her memoir, Shannon recalls the first time she elicited laughs from a group – by announcing to a friend's mom, who was serving chicken cacciatore, that she would “have the chicken, but I don’t want any of the cacciatore." She documents the time spent developing her craft at NYU, the origins of celebrated "SNL" characters Mary Katherine Gallagher and Sally O'Malley. From her personal life, she shares the story of getting together with her husband of nearly 18 years, artist Fritz Chesnut, and how she made a towed car an adventure for her children, Stella Shannon Chesnut and Nolan Shannon Chesnut, when they were young. They're now 18 and 17, respectively.

Shannon also writes of the relationship with her father, a man who had his flaws – at times he could be quick-tempered and he struggled with alcoholism – but whom she whole-heartedly adored. He came out to his daughter in 2001, just months before he died in 2002.

"He really was like my biggest supporter," Molly Shannon says. "He was like, 'Listen, you march into those offices of those agents and Hollywood managers and just say, 'Hey! Hold the phone! I got talent!' And then he was like, 'And use your singing voice.' That was his advice."

Shannon made her "SNL" debut in 1995 and stayed for six seasons. But the success she enjoyed on NBC's sketch show also brought, for a time, a sadness.

"I had been driven to achieve, achieve, achieve," she says, "and I was running and working so hard at my show and trying to make it, make it, make it and then finally when I get on 'SNL' and I get Mary Katherine on, and people (are yelling) 'Molly!' They know my name, and they're coming up to me on the streets. I fell into a depression for a few months because I was like, 'The one person I really want to tell me that I'm good and say she's proud of me is my mom, and this is not bringing her back.'"

The realization afforded Shannon the freedom to enjoy her work without feeling the need to be on top. "You can just enjoy being creative, life as an artist, doing what you love, pursuing your passions," she says. "It gave me a very healthy perspective about fame and what it means, and I carry that with me to this day."

Shannon decided to leave "SNL" not to follow in the footsteps of those who have used it as a career launch pad, but to focus on her personal life.

"I was so happy that I'd gotten that far that I could have stopped there," she says. "I could have frozen myself and been happy for life and gone back to working in restaurants. It far exceeded my expectations, so I was like, 'A stepping stone?' I never saw it that way. I thought, 'This is the greatest job in show business!'"

Shannon adds: "I knew I always wanted to have kids because I lost my mom. I wanted to get married."

Years later, Shannon's desire to soak in motherhood motivates her to keep her workload manageable. She stars with Vanessa Bayer and Jenifer Lewis in Showtime's "I Love That for You," debuting April 29, in which she plays a home shopping network's top saleswoman. Shannon also appears as a popular talk show host and mom on HBO Max's "The Other Two."

"My kids are teenagers, and I really want to enjoy this time because I feel like I'll never get it back," Shannon says. "So I actually don't want to do that much, and I don't want to go out that much. I just want to be there and enjoy my kids before they go to college."

'The Other Two': How wacky showbiz satire, with Molly Shannon as daytime host, adapts for Season 2